Shocking pictures have emerged of an ‘illegal slaughterhouse’ where pigs and sheep live alongside animal carcasses and are surrounded by pools of blood.

The unsettling images were released by Dyfed-Powys Police in south west Wales earlier this week and purportedly show the slaughterhouse in Pembrokeshire.

They show carcasses strung up with blood collecting on the floor underneath, while others show sheep penned off next to the dead animals.

Police described the discovery as ‘horrific’ and highlighted the importance of community intelligence in exposing the slaughterhouse.

It tweeted: ‘Rural Crime team attended a call with multiple agencies to a report of an illegal slaughterhouse in west Wales. Live animals found among carcasses.

‘Yesterday’s horrific job [showed ] the importance of community intelligence, communication and our vital relationships with our partner agencies [to] such illegal practices.’

The investigation was led by Pembrokeshire Council, which has yet to disclose the precise location of the alleged illegal slaughterhouse. It is also currently unclear how many animals were killed there. 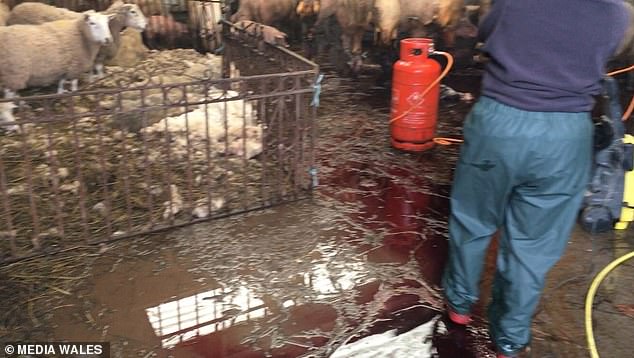 A spokesman for the council said: ‘We can confirm that Pembrokeshire County Council Environmental Health officers together with representatives from other agencies, including the police, are investigating a potential illegal slaughterhouse operating at an undisclosed location in the county.

‘As the investigation is still ongoing, no further information is available at present.’

Two men have been arrested and released under investigation. Police say the investigation into the discovery is continuing.