Ever get the feeling planes are more crowded than ever? Then you’re right! Shocking statistics reveal how the number of flights has gone down but passenger numbers have soared

If you get the feeling that planes seem more crowded than they used to be – then you’re right.

Shocking statistics from the US Bureau of Transportation Statistics reveal that in 2017 there were a record-breaking 741million domestic-flight passengers in the U.S, up from 647million in 2005.

However, in that time the number of flights being operated has decreased 18.5 per cent and the average number of passengers on a US domestic flight since 2007 has risen from 69 to 91.

The decline in the number of flights is being blamed on airlines wanting to reduce costs and increase revenue by using larger aircraft and configurations that allow for more seats – a practice in the airline industry known as ‘upgauging’.

Seth Kaplan, managing partner for the newsletter Airline Weekly, told Travel Weekly: ‘The economics on the cost side always favor a larger aircraft.

‘Upgauging also saves on engine maintenance and airport fees. There are just powerful incentives to try and get more seats per flights.’

To pack more passengers in many airlines have added added extra rows on to aircraft.

For example, in 2007 Southwest Airlines’ 737 aircraft would carry 137 passengers but now the aircraft have been reconfigured to fit 143 passengers. 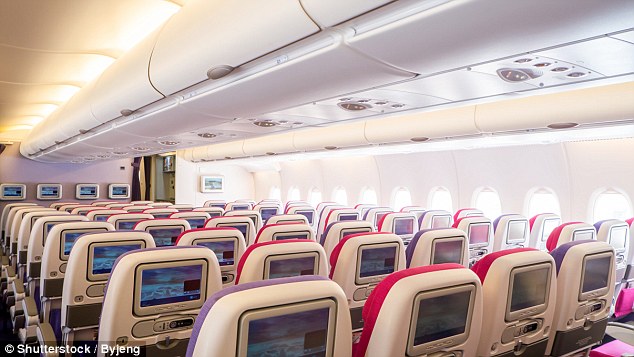 JetBlue is reported to be adding two extra rows to its A320 aircraft, increasing passenger numbers from 150 to 162.

Also, in the mid-1990s, standard seating on a 777 aircraft was nine seats across and it is now not uncommon to see 10 seats in a row.

In addition, much larger aircraft have been introduced to the market such as the jumbo A380 aircraft, which is able to carry 853 people in a single class cabin.

But the economics of the A380 have proved daunting, with airlines having to operate every flight at full capacity in order to make a profit and the plane only being able to land at certain airports.

Earlier this year, Airbus was close to scrapping production of the A380 until Dubai’s Emirates airline made a large order for new models.