A Latina mother-of-two was stabbed in the chest and arm by her ex-boyfriend inside their Bronx apartment during a domestic dispute Monday morning before he tried fleeing to the Dominican Republic.

A Good Samaritan was alerted by his wife and came out of a next door apartment and helped stabilize her until police officers and paramedics arrived.

Bit and pieces of the disturbing video obtained by Telemundo on Tuesday shows Wilson Rojas, 32, walking up the flight of stairs to her third floor apartment.

He placed a can he was drinking from on the ground and tried barreling over it on three occasions, including one of them with the can in his hand as it spills on the floor. 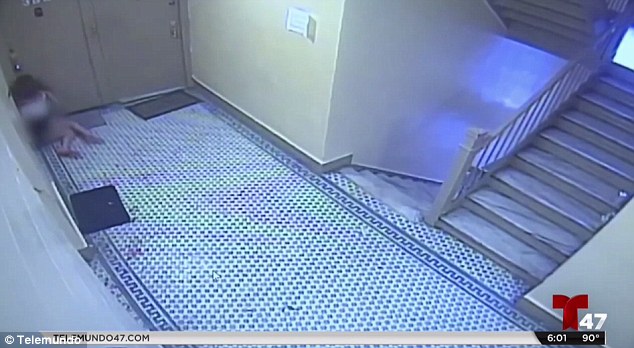 Rojas left and returned minutes later, failing on his first two attempts as he ran into the door with his right arm before tearing it down on the third attempt.

Once inside the apartment, Rojas stabbed his 24-year-old ex-girlfriend, whose name hasn’t been revealed yet, and fled the site about 15 seconds later, leaving her for dead after he used a kitchen knife to attack her, according to cops.

The building security video camera showed the woman stumbling out of the apartment, making a left turn towards an apartment’s door before she collapsed.

Her neighbor rushed out of her apartment and is seen applying pressure on the wounds before four cops arrived and took over until paramedics arrived.

Her 3-year-old boy and 5-year-old girl were taken to a local precinct. 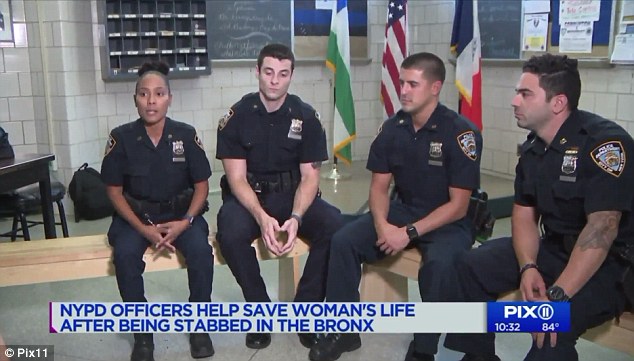 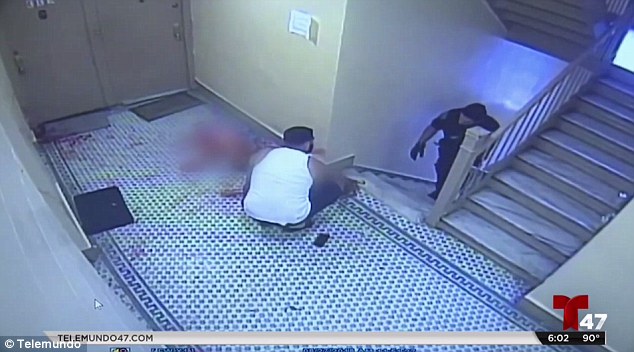 Prosecutors also said that Rojas had called another woman and accused her of ruining his life. He allegedly said he had already killed his ex-girlfriend and threatened to kill her and her husband and child.

Instead he headed to John F. Kennedy International Airport where authorities arrested him at 7PM before he tried boarding a flight.

Rojas, who was not issued bail, was charged with 18 counts, including attempted murder, weapons possession, burglary and harassment.

It wasn’t Rojas’ first violent altercation with a partner.

A judge in 2014 told him not to go near his wife, and two years later he threatened to kill her. He pleaded to a misdemeanor and was ordered to stay away from her until 2019. He also beat up his parents according to the New York Police Department.