Shocking footage reveals the moment a security guard kicked a man in the face as he lay on the floor outside a McDonald’s in an early hours attack.

The clip, filmed by a member of the public at around 2am, shows the security guard closing in on the man outside the fast food restaurant in Leeds yesterday.

He then strikes the man with his foot, causing him to jump up and run off.

McDonald’s claims the security guard works for an external company but condemned the incident as ‘completely unacceptable’.

The clip, filmed by a member of the public at around 2am, shows the security guard (pictured) closing in on the man outside the fast food restaurant in Leeds yesterday before kicking him

Witnesses said the victim and two of his friends had been abusive towards security staff after they were refused entry to McDonald’s at the city’s St John’s Centre because they appeared to be drunk.

Speaking anonymously, one man said the trio had thrown glass bottles at the door of the restaurant and attempted to assault security workers before the man was kicked.

McDonald’s has now launched a full investigation into the incident.

A spokesman said: ‘It is completely unacceptable to see anyone behaving this way, and we are in the process of fully investigating the incident.

‘The individual in question works for an external security company and will not be on duty at any of our restaurants while the investigation is ongoing.’

West Yorkshire Police said it had no record of officers being called to the incident, so no arrests have been made. 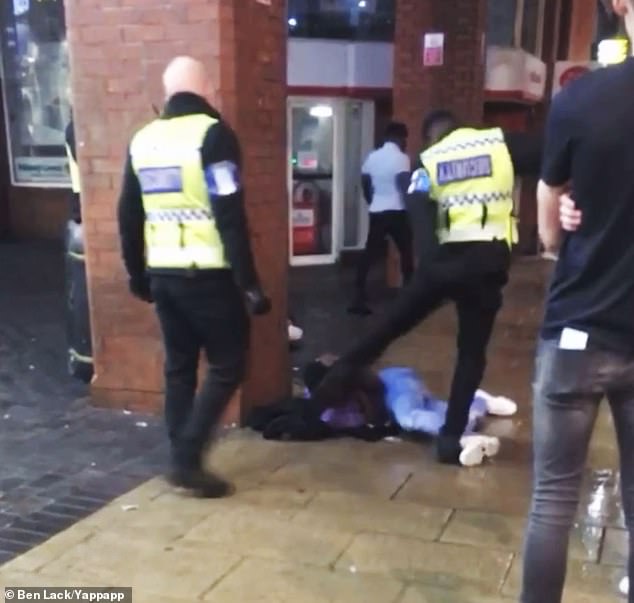