Shoe addict who owns a collection worth £25,000 moved 500 pairs from London to Scotland

A shoe addict who moved her huge footwear collection worth £25,000 more than 400 miles from London to Scotland has revealed she still wears her stilettos to work from home every day during the coronavirus lockdown.

Self-confessed footwear obsessive Katie Porter, 51, owns one of Britain’s largest collections of shoes with more than 500 pairs in her closet – spanning from designers such as Alexander McQueen and Vivienne Westwood heels to simple Topshop boots.

Mother-of-one Katie, from Hammersmith, London, spent one week packing up her shoe collection for a big move from London to Edinburgh last year, and even gave furniture away so her favourite footwear – which filled 80 boxes – could all fit in the removal van.

And despite the current UK coronavirus quarantine, events manager Katie has been finding savvy ways to make the most out of her expensive collection – by still wearing heels to work at home in her flat every day.

Self-confessed footwear obsessive Katie Porter (pictured), 51, owns one of Britain’s largest collections of shoes with more than 500 pairs in her closet and spent a week moving the £25,000 haul from London to Edinburgh 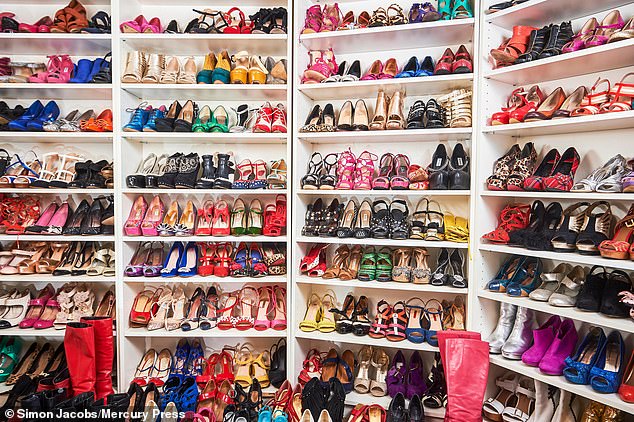 Mother-of-one Katie, from Hammersmith, London, spent one week packing up her shoe collection (pictured) for a big move from London to Edinburgh last year, and even gave furniture away so her favourite footwear – which filled 80 boxes – could all fit in the removal van

Katie, who now lives in Portobello, Edinburgh, said: ‘While working from home, I’ve noticed that people, like my boyfriend Sebastian, can work in their pyjamas – but I decided to get changed every day to go to work.

‘I’m still wearing my heels at the desk, just with various coloured socks underneath!

‘I’ve now been looking for more shoes online – I’m currently on the hunt for some electric blue boots – but I’m being careful because I don’t know when I’m next going to wear them.

‘I want to encourage others not to put their best clothing away because wearing them makes you feel good mentally. 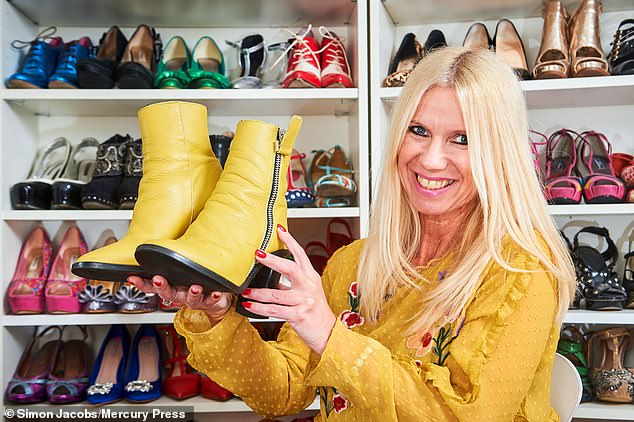 ‘I’m just remembering that everything’s not come to an end and I can still wear my shoe collection and get a nice reaction from people.’

Katie’s earliest memories are of playing in heels as a toddler and after buying her first pair aged just 12, she began avidly collecting them at 19 and has not stopped since.

But since moving to Scotland, Katie has bought more practical shoes to walk and cycle in, such as yellow and brown snakeskin Dr Martens and Adidas trainers. 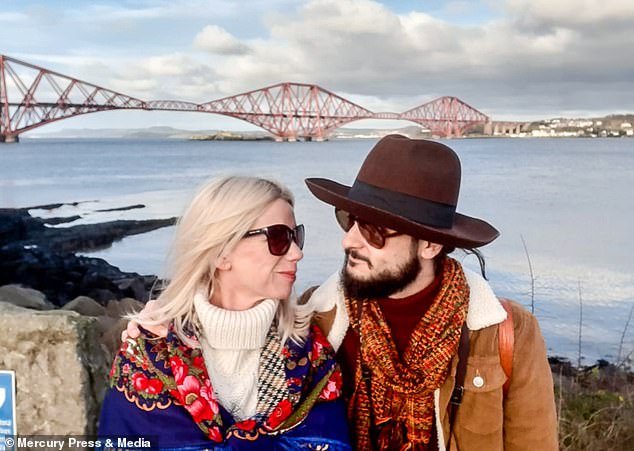 Katie has found love with new partner Sebastian (pictured), who owns a big collection of trainers himself 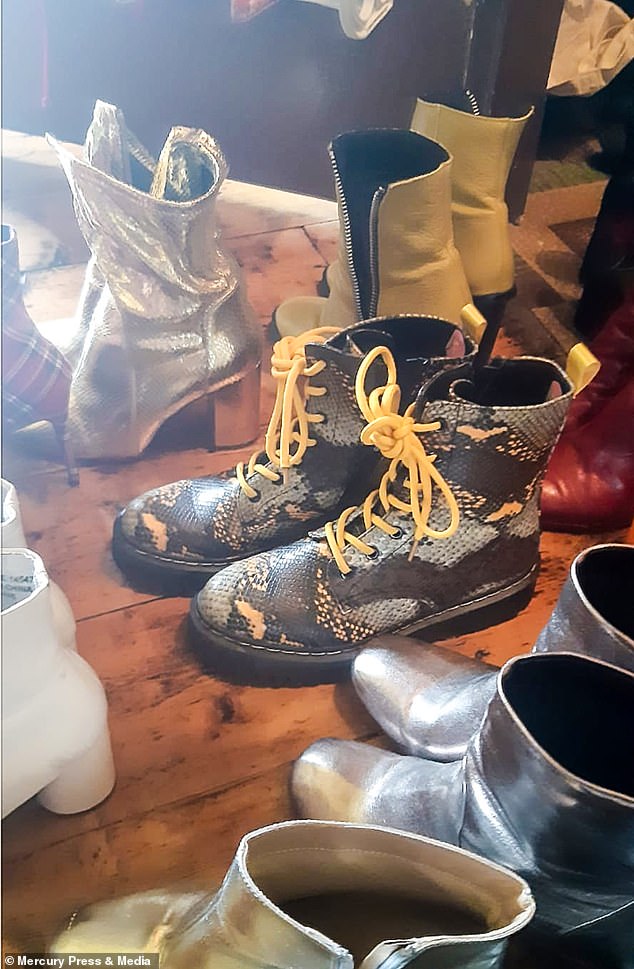 Even while on lockdown, Katie is finding ways to increase her already 500-pairs-strong collection by looking for shoes online (pictured, the collection in Edinburgh) 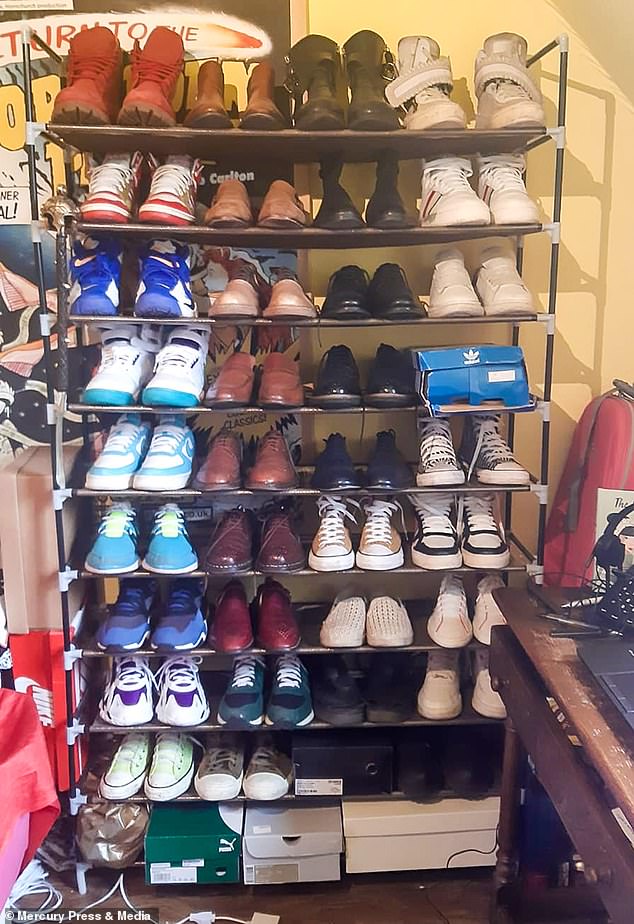 Her new flat also boasts a giant walk-in cupboard for her collection and she hangs hundreds of pairs of her beloved shoes on doors around the flat on racks.

Katie said: ‘I had to throw away so many things before the move and I gave away furniture to make room for my shoes in a giant rental van.

‘I decided to get rid of some shoes and give them to charity shops, which was hard because I kept thinking ‘I shouldn’t have done that’. 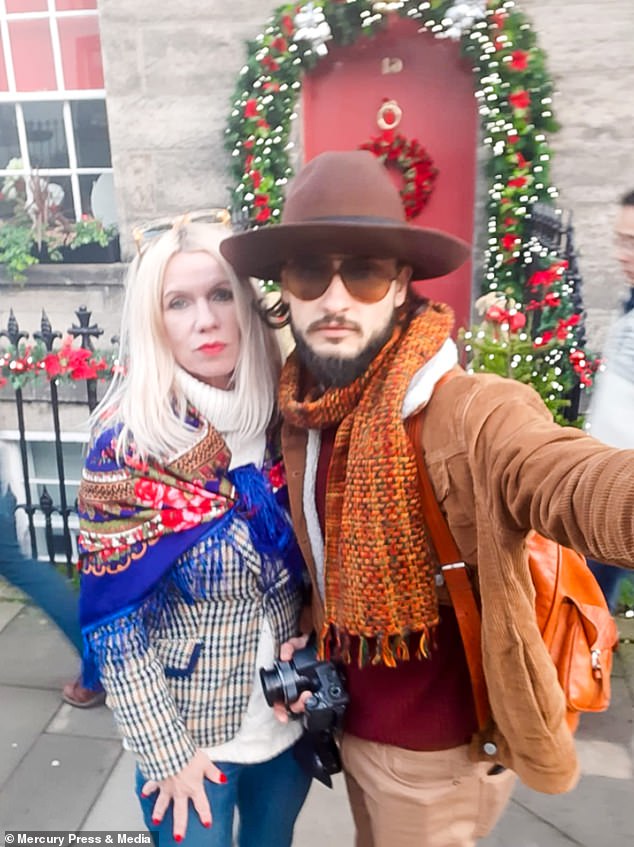 Katie said she became interested in shoes as early as 12-years-old. Pictured with her partjer Sebastian 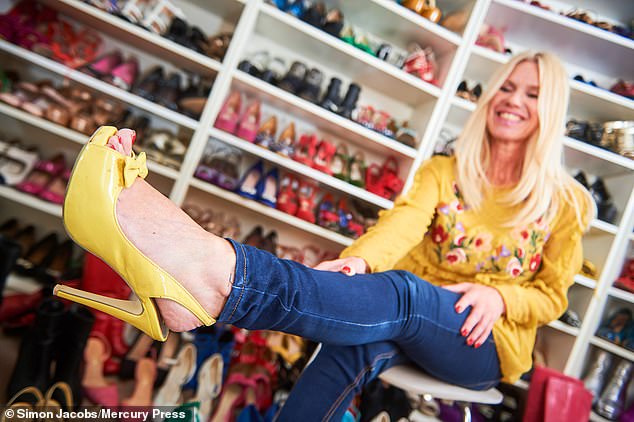 Katie joked that filling a removal van with 80 boxes filled with shoes felt ‘shameful.’ Pictured trying on a pair in her old house in London

‘I ordered more and more boxes and the van size got bigger and bigger. It was quite shameful!

‘It took a good week to pack up the shoes in bubble wrap and pretty much every box was labelled ‘Katie’s shoes’.

‘We now live in an old house in a flat on the top floor and it has spacious and giant walk-in wardrobes, so some of the shoes are in there and others are hanging on doors.

‘Sebastian thinks I have too many shoes but I’d say he’s the same because he has a big collection of trainers so it’s all compromise!’

Katie has been obsessed with shoes for her whole life and was always drawn to the high heels in her primary school’s dressing up box. 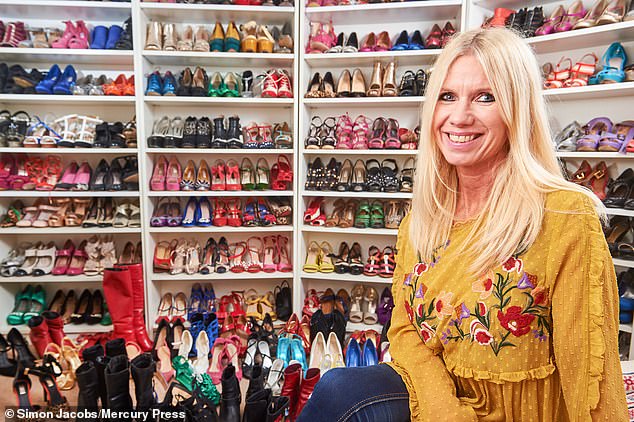 The mother-of-one explained that her new home had a walk-in wardrobe where she put most of her pairs, but others had to hang on the walls and doors 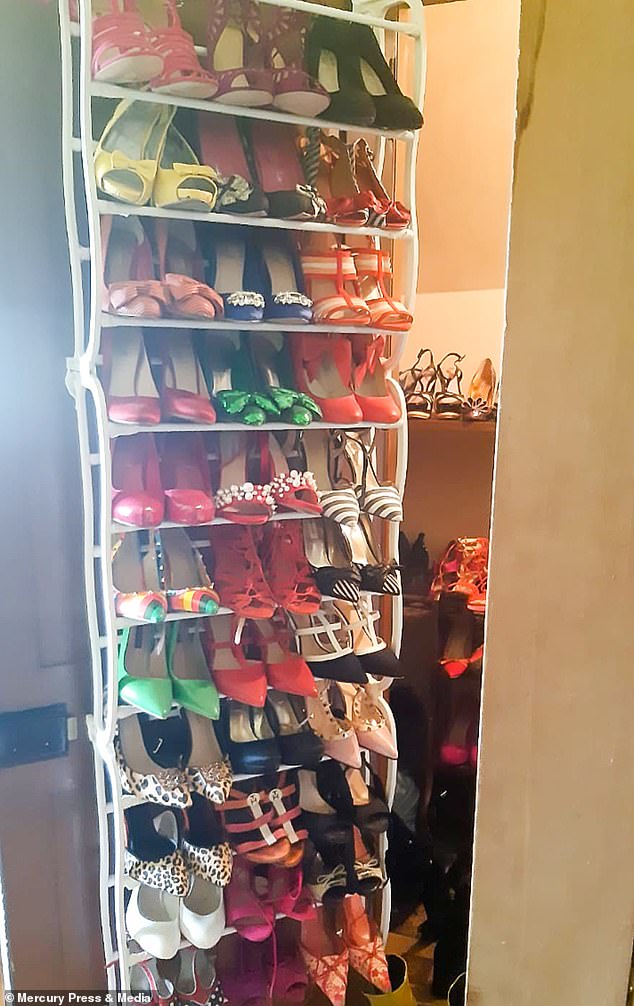 Pictured: some of Katie’s shoes after they were moved to her new home in Edinburgh, 400 miles away from London

After saving up her birthday and Christmas money as a teen, Katie splashed out on her first pair of Chelsea Boots from BOY on London’s King’s Road.

She has since built up a 500-strong hoard over 38 years, and believes she has one of Britain’s largest shoe collections.

Katie said: ‘My interest in shoes goes back as far as I can remember.

‘There were a pair of plastic heels in the dressing up box at play group and infant school and I would always pick those.

‘They were leopard skin Chelsea Boots from BOY on King’s Road in London and they were marvellous. 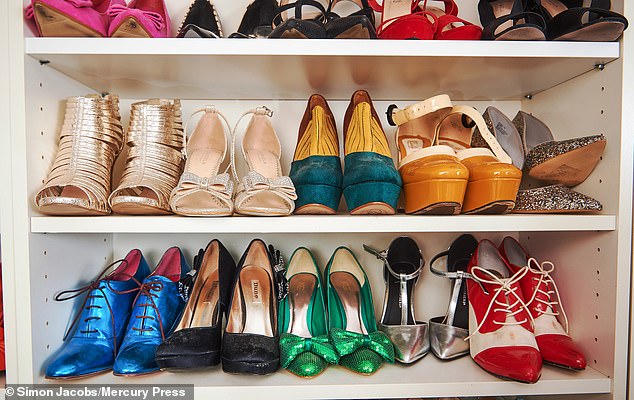 She has since built up a 500-strong hoard over 38 years, and believes she has one of Britain’s largest shoe collections

‘I paid for them using birthday and Christmas money. I can’t remember the price anymore but I know they wouldn’t have been cheap.

‘I’ve bought my shoes from everywhere I have seen them over the years.

‘It doesn’t matter to me where they come from, they can be designer or come from a charity shop.

‘That’s what great about my collection. It’s not that niche and so many people enjoy shoes, so it’s accessible to people.

‘Because I have so many pairs of shoes, I’m trying to declutter and I think I might just be more selective from now on and spend a bit more money on a pair I really like. 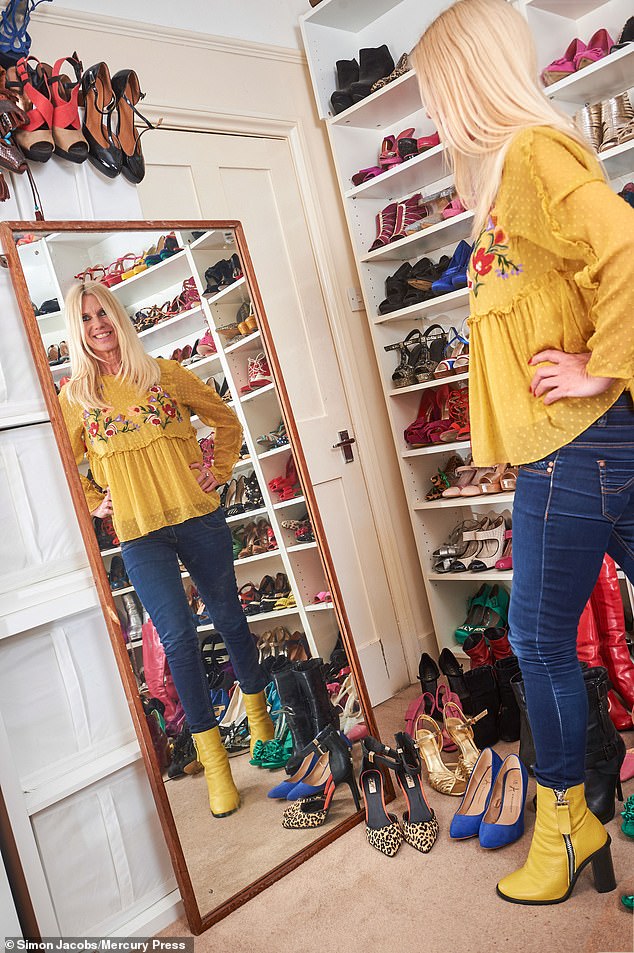 Katie has built up a 500-strong hoard over 38 years, and believes she has one of Britain’s largest shoe collections. (pictured trying yellow heeled boots at home in London before the move)