Bloody Sunday in Atlanta: Argument at baseball game turns DEADLY when one person is shot dead and five more are injured – including 6-year-old left in critical condition – while shooting across town claims life of another child, 4

One person is dead, and five others injured – including a six-year-old – after an argument ended in gunfire during a sports game at an Atlanta park.

The shooting happened around 7 p.m. on Sunday, at the Dunbar Recreation Center inside Rosa L. Burney Park.

Atlanta police arrived to find at least six people had been shot after a dispute that escalated during a baseball or softball game.

A man in his 30s was transported to Grady Hospital where he was pronounced dead. A six-year-old is at the Children’s Healthcare of Atlanta – Egleston Hospital in critical condition, police said.

There have been no arrests and the gunman is still at large, police said.

APD Deputy Chief Charles Hampton Jr. told local media there was a baseball or softball game occurring when an argument broke out, and it ended with shots fired.

It is not clear what the argument was about or what the relationship is between the gunman and the victims.

Police confirmed that two shootings, the one in the park, and the other right outside, were connected earlier on Sunday.

The first shooting happened at Rosa L. Burney Park and the other happened about a half a mile away at 500 Whitehall Terrace SW, outside of Dunbar Elementary School.

‘And as we’ve said countless times, we’re just asking the citizens just to find a way to resolve conflict without weapons,’ Deputy Chief Charles Hampton Jr. said during a press conference on Sunday. 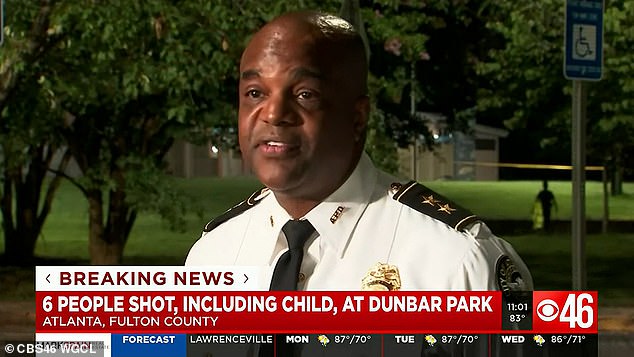 Deputy Chief Charles Hampton Jr. told local media there was a baseball or softball game occurring when an argument broke out, and it ended with shots fired 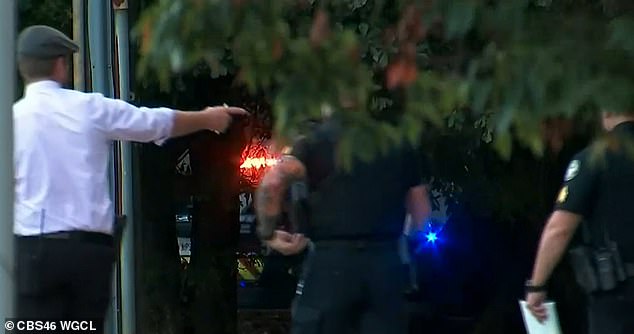 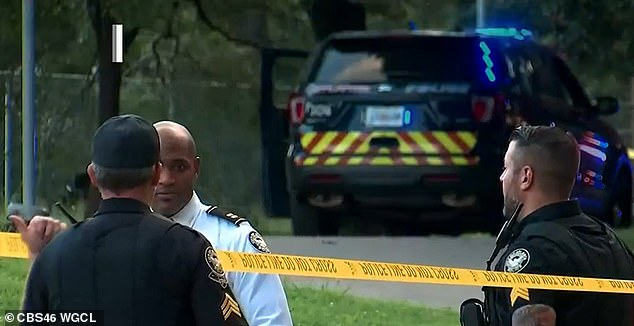 It is not clear what the argument was about or what the relationship was between the gunman and the victims, but police urge anyone with information to come forward

Across the city, in DeKalb County, a four-year-old girl was shot and killed in the backseat of a car on I-85 north, CBS46 reported.

According to a DeKalb Police Department spokesperson, officers responded to I-85 north at North Druid Hills Rd. at 7:38 p.m. and found the girl dead in the backseat of a car with an apparent gunshot wound.

No one else was injured. It is not known if the child’s death is connected to the park shooting, or what led up to the tragic incident.

Anyone with information about the shooting at the park is urged to call police at 404-614-6544. To remain anonymous, submit tips to Crime Stoppers Atlanta tip line at 404-577-TIPS (8477) or online at www.StopCrimeATL.com.