An online shopper left her pals in stitches after twirling in the mirror to try on her new birthday dress from Oh Polly – only for her entire breast to fly out because the garment was so small.

Chloe Maguire, from Birmingham, said she ordered some outfits from the online fashion brand earlier this month for a night out to celebrate her 23rd birthday, including a £40 green dress that was her ‘favourite’.

The tax accountant claims she sized up hoping to accommodate for her size 34E bust and ordered a 14 – but was ‘shocked’ when her left breast ‘fell out’ while she was trying it on.

The singleton shared a photo of her fashion mishap in the girls’ group chat, much to her friends’ hilarity and said that she feared the club would have ‘cleared out’ if she actually wore it as onlookers would have had a ‘heart attack’.

Footage captured by the fashion lover show Chloe twirling in a mirror wearing her the cut-out number before she adjusts the strap and her entire boob slips out.

Chloe Maguire, from Birmingham, was left in stitches when her breast accidentally popped out of the £40 Oh Polly dress she bought for her 23th birthday bash 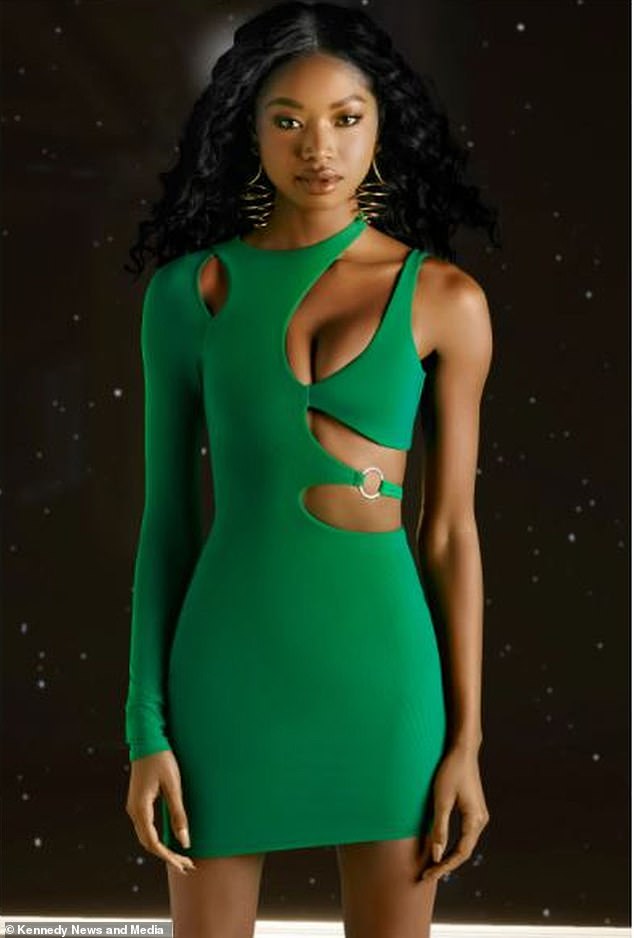 What the frock was supposed to look like: The body-hugging dress, which is available on the Oh Polly website, runs from a size 4 to a size 16

Chloe said: ‘If I wore that out everyone probably would have had a heart attack, the club would have cleared out.

‘I literally tried [to get boobs to fit]. I have a video of me doing a turn in the mirror and literally the boob just falls out. It doesn’t even hold it in.

‘The video’s not even ten seconds long and it literally just falls out, it was really deflating.

‘I was shocked more than anything because I managed to get it on fine and it fit everywhere else, it was just that one little strip of fabric and I was like “Oh my God, what am I going to do? I don’t have another outfit”. 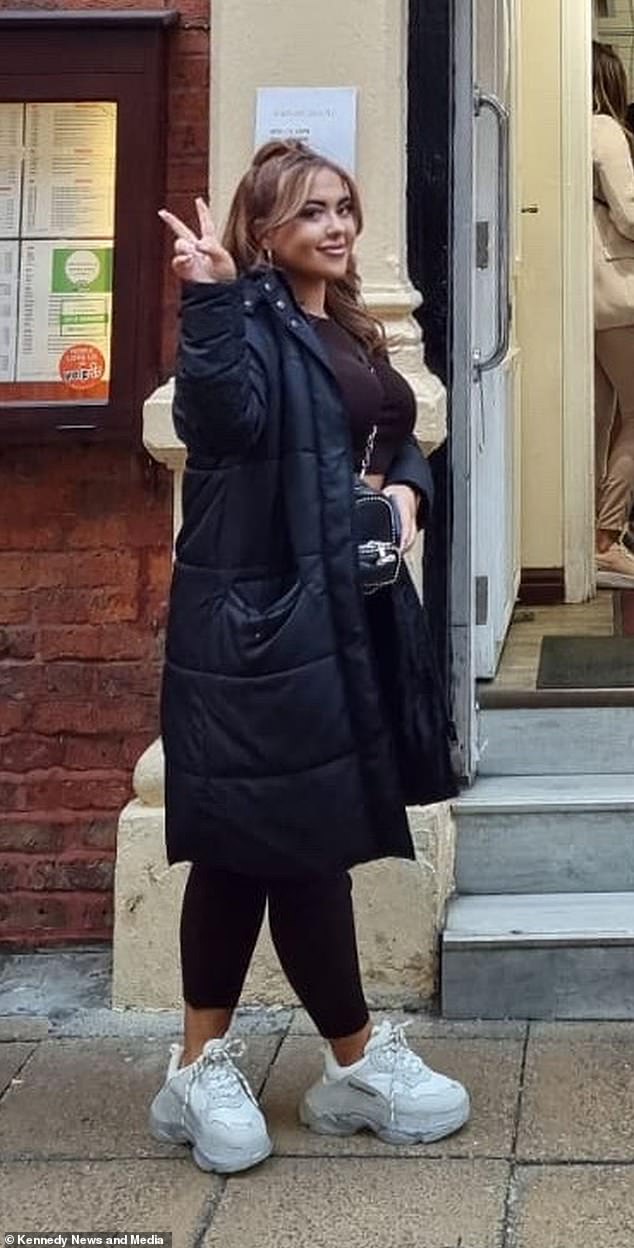 Chloe, pictured out and about in more casual garb, sized up and bought the dress one size bigger than her other clothes in order to accommodate her 34E bust, but it wasn’t enough

The 23-year-old was trying the dress on at home to see what it would look like on her big day, but her breast started to slide out of the fabric, right

‘I sent a photo into the group chat and was like “I think this is a no girls” and they were all laughing like “I can’t believe it didn’t fit you” and I was like “same”.’

Chloe said she returned the £40 dress and ended up wearing a cream two-piece that she also bought from Oh Polly.

A TikTok video Chloe shared of the model wearing the mini dress alongside one of her has amassed more than 8,900 likes, comments and shares. 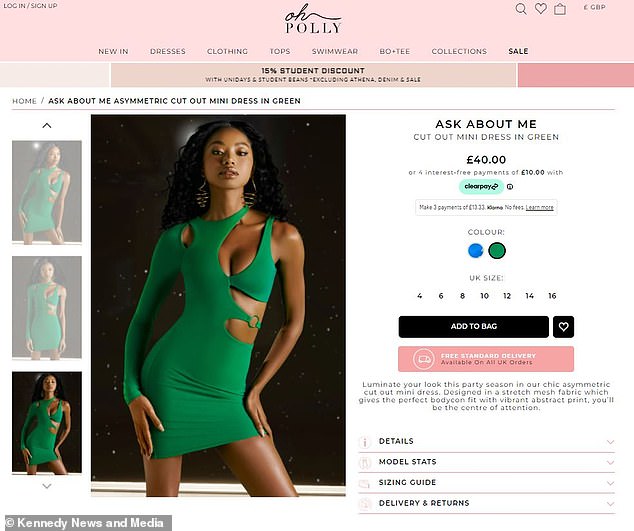 Chloe said: ‘I ordered multiple different things. The green dress was going to be my go-to, it was my favourite.

‘I wanted something a bit different. I feel like I’m very much a monochrome person. I don’t really wear colours, only nudes and browns and things.

‘I thought I’d order the biggest size in it and I’ll be fine and hold me in all the right places, when obviously it arrived that wasn’t the case.

‘I ordered a size 14, usually at a push I’d order a 12, because it had a sleeve I didn’t want it to be too uncomfortable or tight and I know that I’ve obviously got a bigger chest than other people.

‘I came to work the next day and the girls were like ‘oh my God did you try your dress on?’ and I was like ‘yeah, it’s depressing’.’ 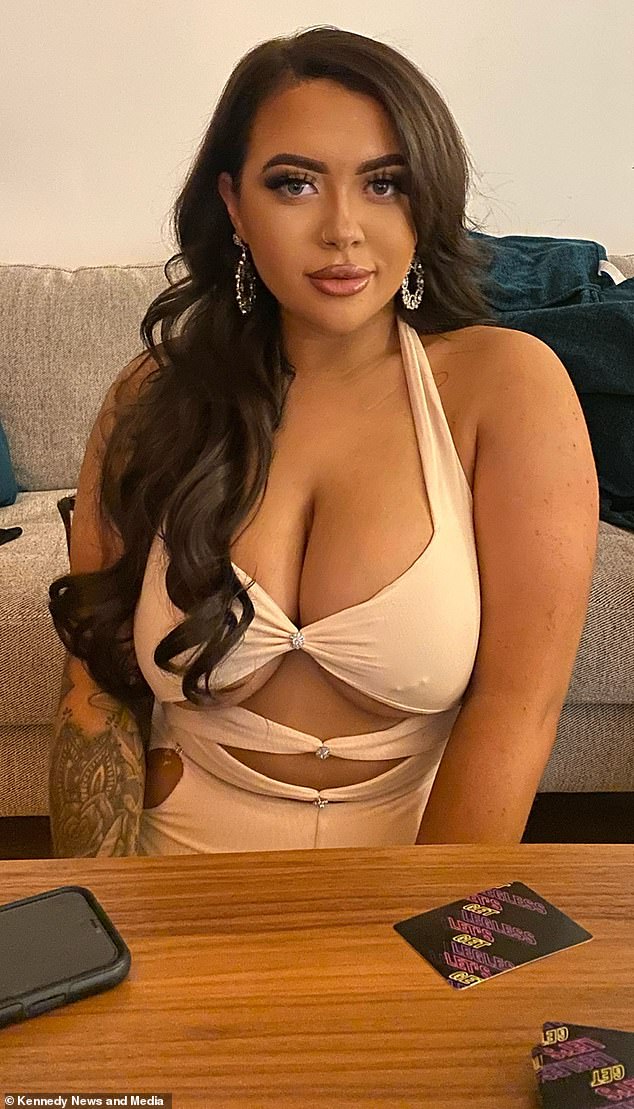 Chloe is used to wearing dresses with cut outs, but the Oh Polly number she hoped to wear for her birthday party left her gobsmacked

Chloe, who is an aficionado of glamourous mini-dresses, shared her misadventures on TikTok, comparing a picture of the model in the green dress and her 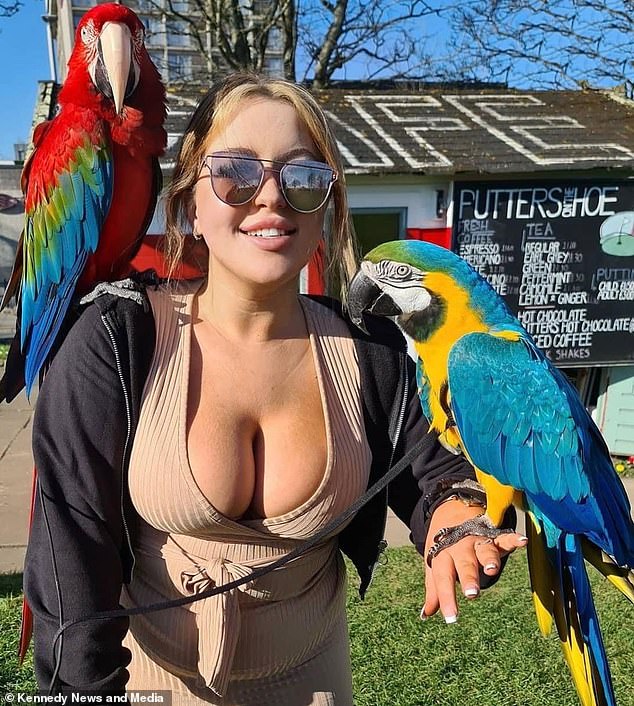 Chloe, who admitted she tends to stick to nude colours, wanted to try different with the green dress