A savvy shopper has revealed how she serves up a festive feast with all the trimmings for just £10 – by combing supermarkets for reduced stock on Christmas Eve.

Instead, she times her shops to coincide with when supermarkets put out their yellow-stickered reduced items, often scoring food and drink for between five and 10 per cent of its original price – and the festive season is no exception.

By sticking to yellow sticker shopping, Hollie plans to pick up a turkey for just £7.50, as well as sides like pigs in blankets and stuffing for pennies, and vegetables for less than 50p.

And she’s shared her tips so that you can score the same impressive hauls as hers.

Bargain hunter Hollie Allen, 26, from Chelmsford, Essex revealed how she can save her money by shopping only yellow-label, reduced,  items, and said she could serve up a festive roast with all the trimmings for only £10 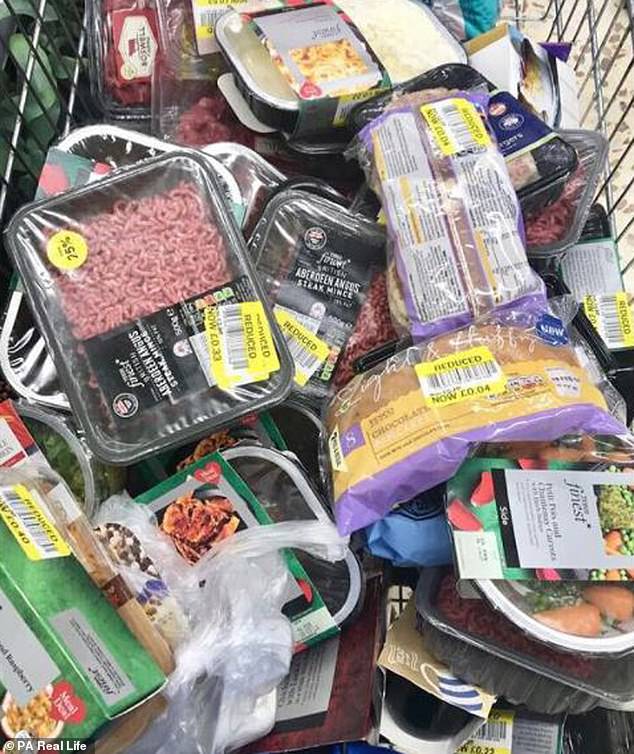 The charity worker said: ‘Around Christmas, you see people going really mad and spending hundreds. It can get very over the top, when it really doesn’t need to be that way.

‘By only buying reduced food, I can serve up a Christmas dinner for my family of three for around £10.

‘I usually buy a roasting joint in advance, as and when I see one on offer, and store it in the freezer so I have a back up plan.

‘Then, I’ll wait until Christmas Eve afternoon and hit the shops to get a turkey and all the trimmings – stuffing, pigs in blankets and veg. 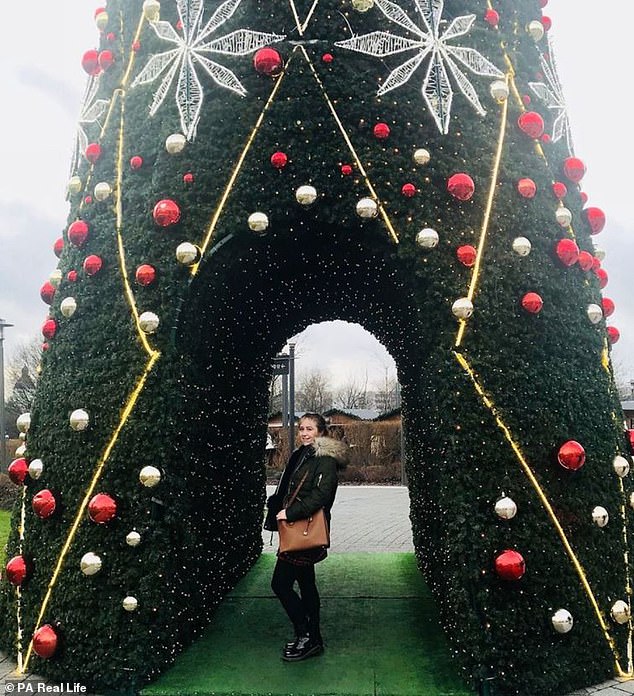 Hollie, who is a charity worker, explained she lived alone with her mother and was in charg eof the food shopping 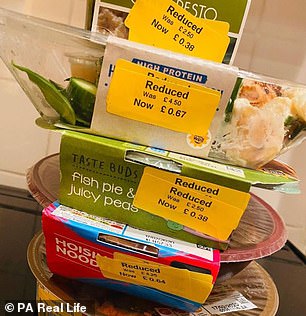 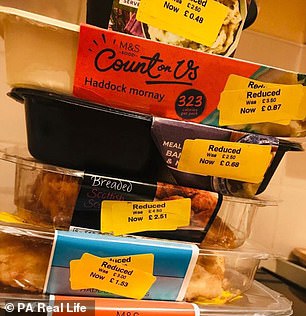 Over the years, Hollie has perfected her talent for finding bargained food, from ready meals for 38p (left) to fish for 87p (right)

‘Because shops close for a few days over Christmas, they really need to get rid of stock or else it’ll go off, so you can get things for literal pennies.

‘It’s cutting it fine, but if you can hold your nerve, it’s worth it.’

Hollie, who is single, still lives at home with her mum and shares responsibility for the shopping and cooking, has been thrifty for as long as she can remember.

‘When I was a teenager I always used to go into town on Sundays and be there when shops were reducing cakes and pastries, she said. 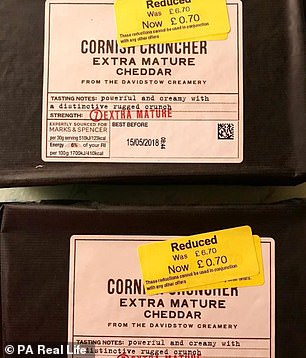 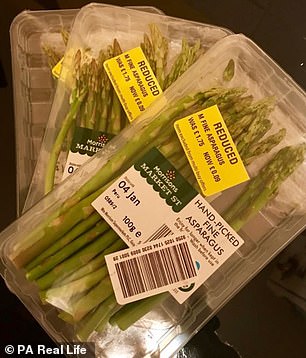 Hollie’s hauls are varied, from Cornish crunches for 70p each (left) to asparagus, 9p, right. She said she was taught these reduced items tips by her family

‘Back then, it was literally 5p for bags and bags of cakes.

‘All these little money saving tips and tricks got passed on to me through my family.’

For the past decade, Hollie has been what is known as a ‘yellow sticker shopper’ – somebody who takes advantage of the reduced stock that supermarkets offer up at the end of each day, to prevent items nearing their sell-by dates being wasted.

Over the years, she has perfected the fine art of scoring the best bargains.

Sharing her pearls of wisdom, she explained: ‘It’s important to figure out when shops start making their reductions, as individual stores can differ on times. 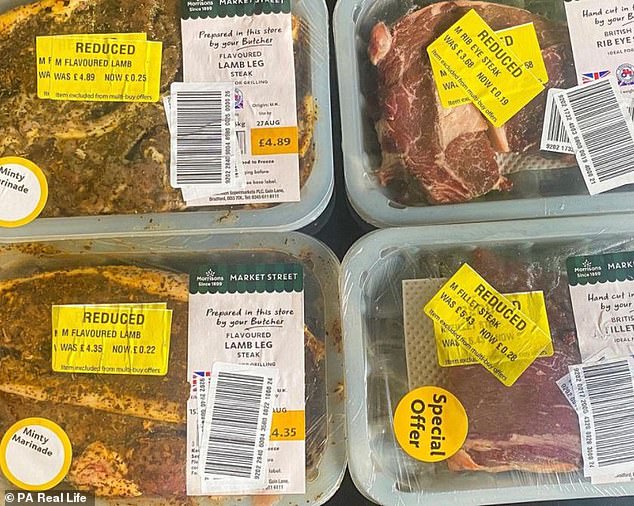 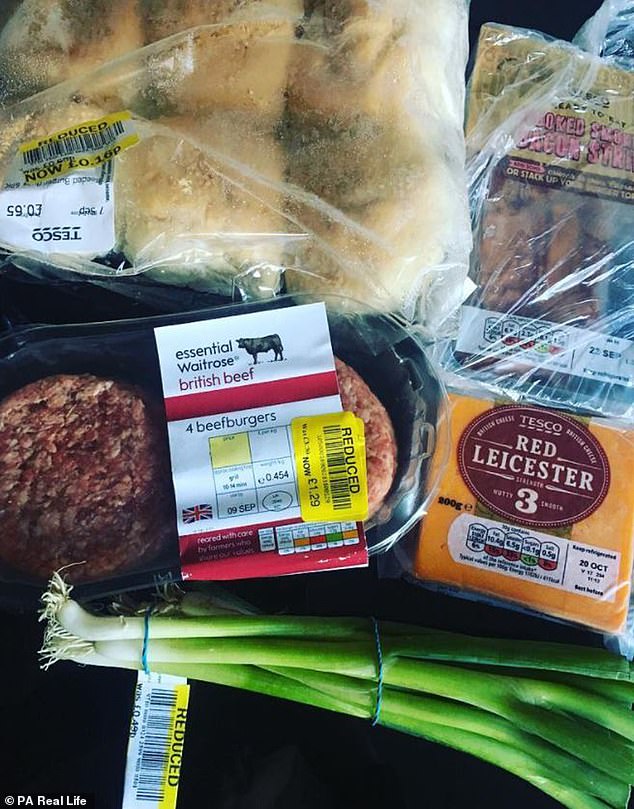 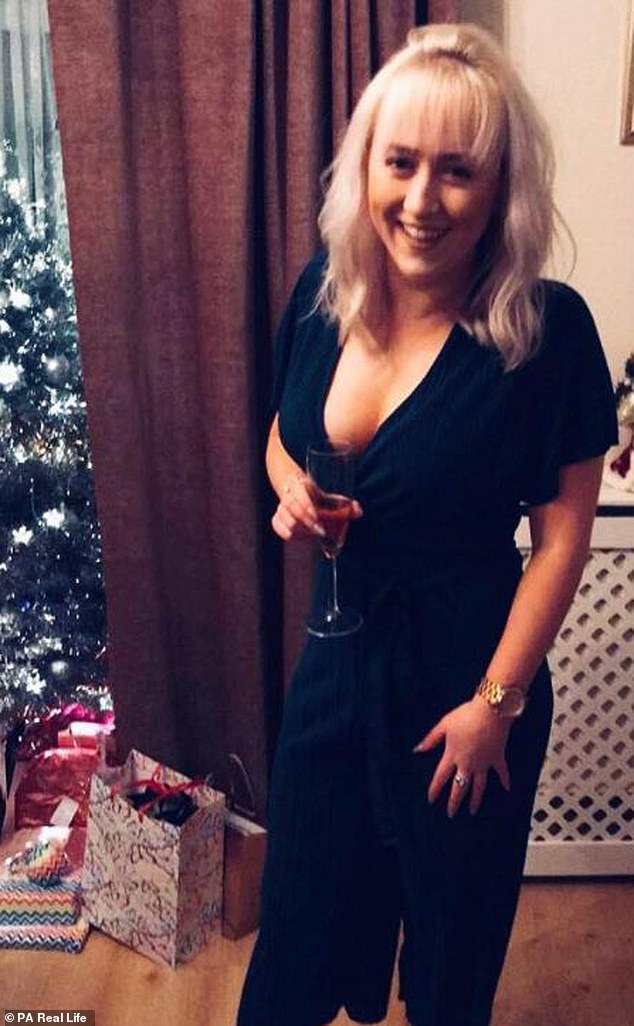 Hollie getting her festive spirit up last Christmas. The bargain hunter said she could serve a complete roast of reduced items only

‘Some put them out in one go, and others make gradual reductions throughout the day.

‘I make sure I check out the smaller shops too – not just big supermarkets.’

As Hollie’s meals are dictated by what is on offer, she cannot plan her menus too far ahead, which means sometimes getting creative in the kitchen.

She continued: ‘You do have to think outside the box a bit, but it helps to buy versatile things, like chicken or sausages.

‘You can get really good reductions on them, and they can be used in all sorts – pastas, casseroles, curries and so on. 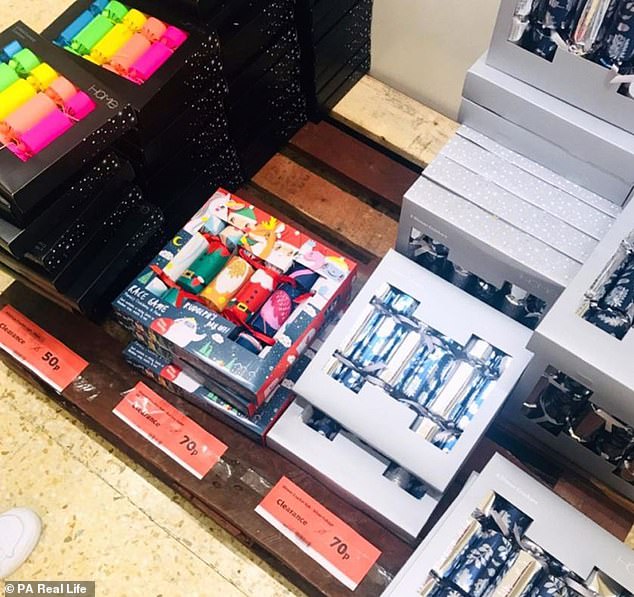 Hollie also got her accessories on a bargain, picking up some of these Christmas crackers up, reduced to 50 and 70p 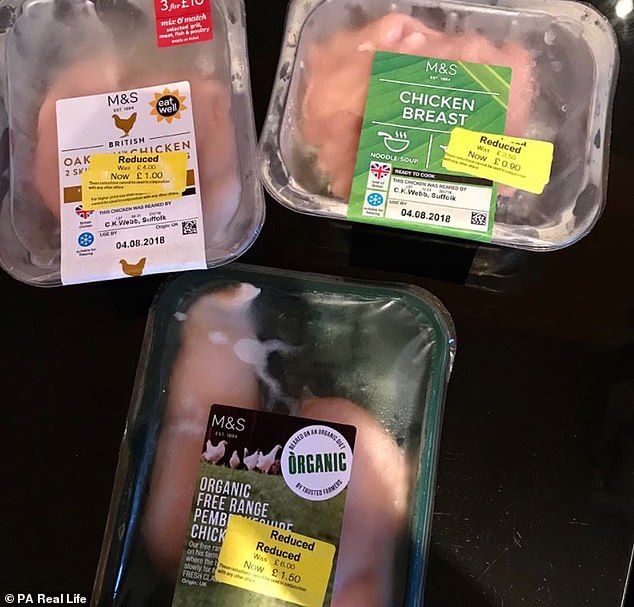 £13.50 worth of chicken that the savvy shopper bought for only £3.40 thanks to her bargain shopping skills

‘I also stock up on microwavable meals whenever I see them, as they make great lunches. A supermarket meal deal will cost you about £3 a day, which can really add up over time, but I can get ready meals for about 50p to 60p.’

Although she does not know the exact price of her weekly shop, as it can fluctuate depending on the deals on offer, Hollie has, in the past, picked up bargains like £3 worth of gluten free sausages for 45p, rib eye steaks for 19p and free range organic chicken breasts from M&S for just £1.50. 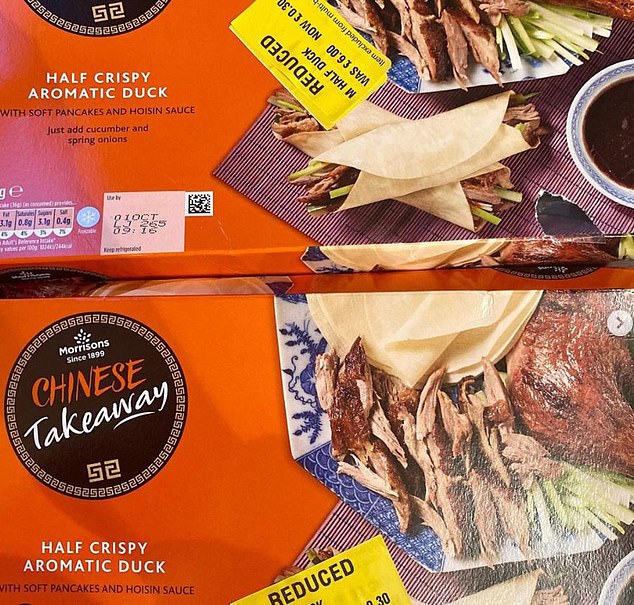 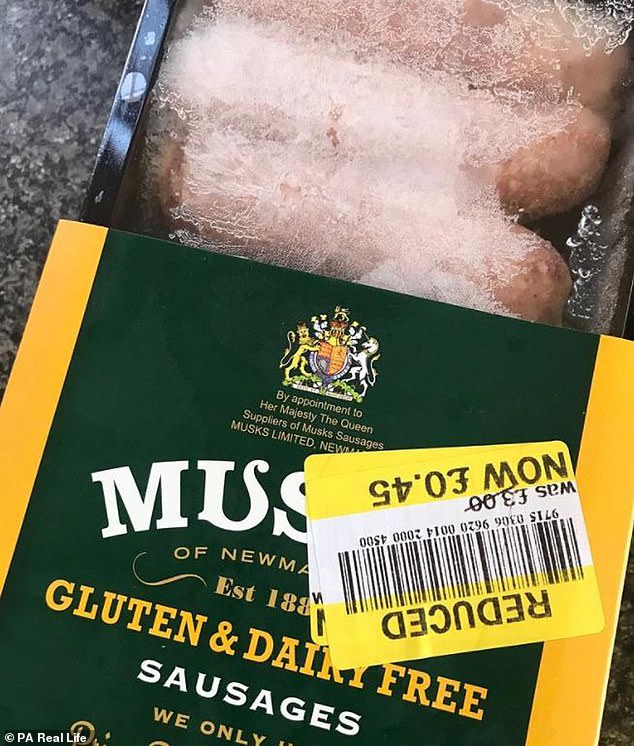 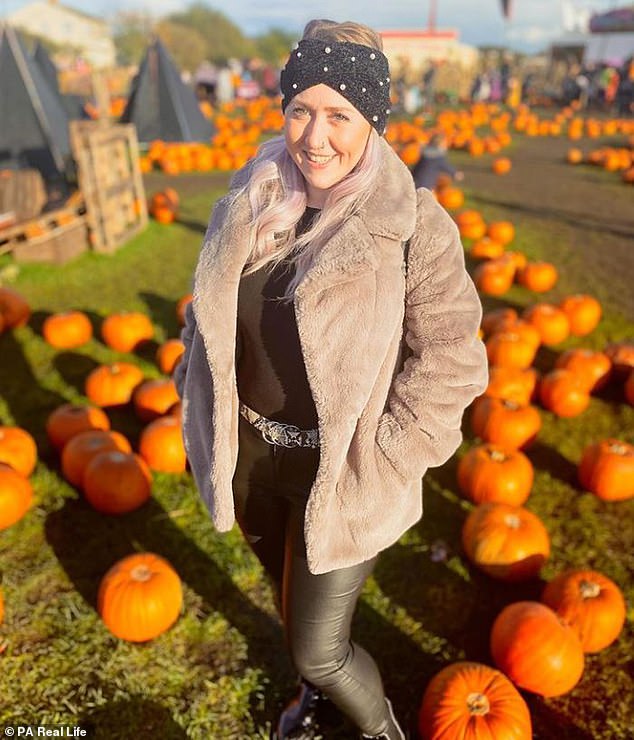 Hollie at a pumpkin picking event. She said she had picked up bargains like £3 worth of gluten free sausages for 45p, rib eye steaks for 19p and free range organic chicken from M&S for just £1.50 in the past

But one of her greatest finds to date was a £6 crispy aromatic duck – complete with pancakes and hoisin sauce – that she picked up for just 30p, taking it home and serving up a delicious ‘fakeaway’ dinner.

‘I’ve also managed to get stuff like Easter eggs for really cheap,” said Hollie, who bought the discounted eggs when they were on offer in the run up to Easter.

‘I stocked up, and stored some of them away to have as treats throughout the year. It doesn’t have to be Easter to enjoy a bit of chocolate.’ 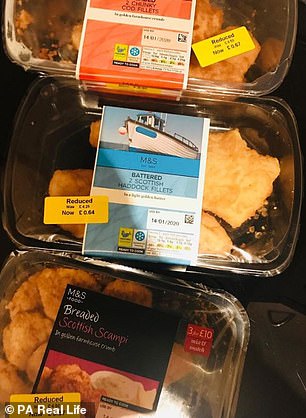 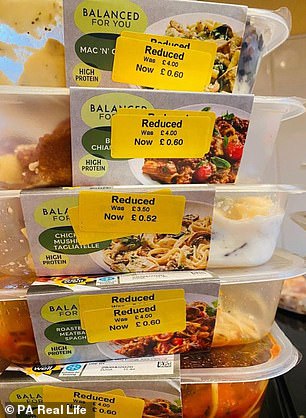 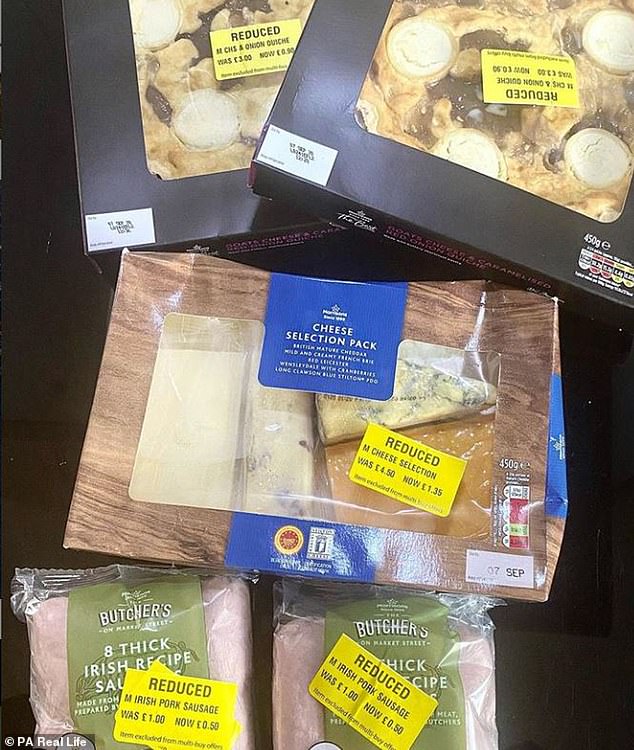 Cheese, sausages and quiches worth £12.50 that Hollie paid £4.15 for during on of her trips to the supermarket 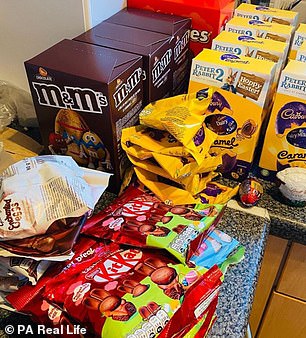 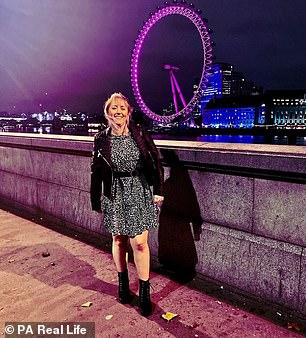 Hollie, pictured right, said she also found Easter chocolate on bargain, which she stored at home for the rest of the year (left) 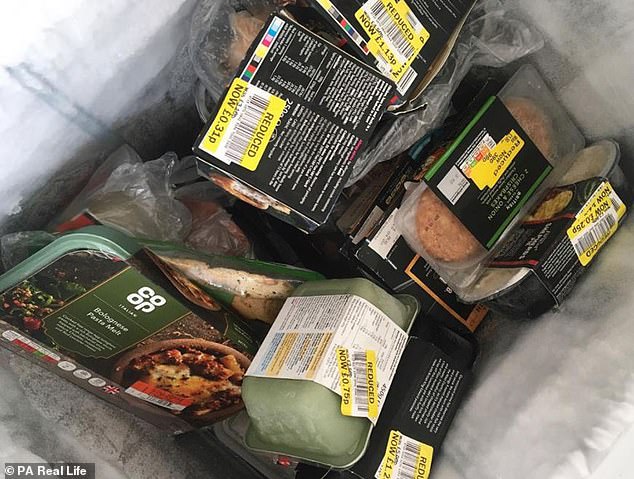 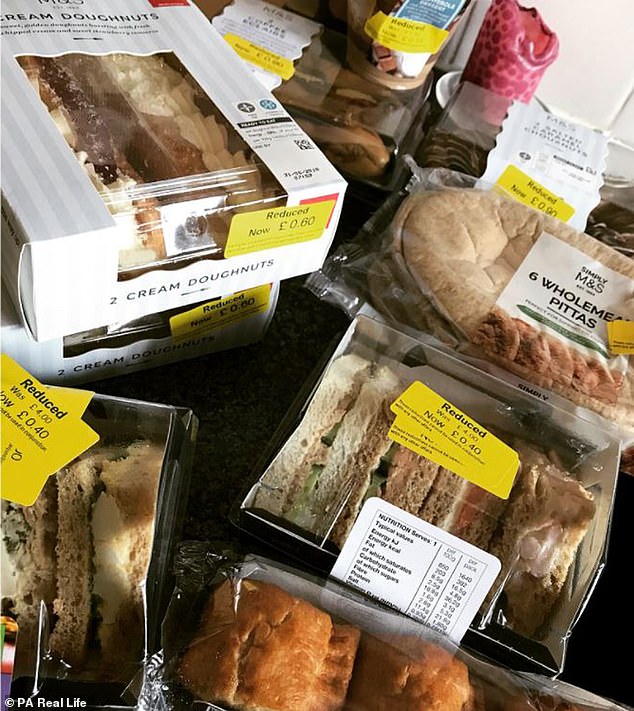 And with the festive season well and truly underway, Hollie’s money-saving methods are set to come in more handy than ever – especially with a survey by price-tracking website Alertr.co.uk finding that the average Christmas dinner this year will cost £57.39 per family.

Revealing that she can score hers for more than 80 per cent less, she said: ‘Christmas isn’t just one day – the entire build up can get really expensive.

‘Lots of people do things like a buffet on Christmas Eve, a dinner on the day itself and a big meal on Boxing Day, too.

‘But this year, more than ever, people are being mindful of money so I hope I can prove that you don’t need to spend hundreds to have a special day.’

1. Figure out what time your local supermarkets make their reductions

2. Stock up on essentials that can be stored in the freezer, like meat and bread

3. If you’re in the shop and the reductions aren’t very good, don’t be afraid to come back later when they may be cheaper

4. If you see something on offer you know you’ll use, buy it. It doesn’t matter if you don’t need it that day – you can store it until you do

5. Focus on food that is versatile and can be used to make several different meals

She added: ‘My family don’t mind at all that we eat reduced food. It still tastes great.

‘People can be a bit judgmental in the supermarket when they see you loading up your trolley with yellow sticker stock, but they don’t realise how much I’m saving by doing this.’

Keen to instill her money-saving mindset in others, Hollie has set up an Instagram account where she proudly shows off her cut-price produce.

She concluded: ‘It’s not exactly influencer level, but I have a few followers on there who have been really kind.

‘There is a real community out there of yellow sticker shoppers. They’ll share helpful tips and hints, like where to go for the best reductions, and what time to hit which shops.

‘You do have to be patient and a bit tactical by timing your shops, but it’s so worth it when you can buy food for literally pennies, and prevent it going to waste.’