Millennial shoppers are going wild for a three-in-one avocado slicer which promises to revolutionise brunch preparation.

The $12 device comes with a blade to split the fruit, a special seed-removing device and a slicing wand which cuts the whole fruit into even sections.

Available on Amazon Australia the device has proven to be very popular with customers rating it an average of 4.4 out of 5 stars on the online shopping platform. 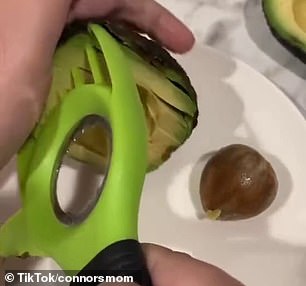 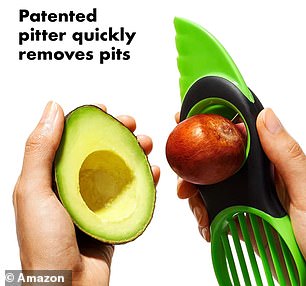 The $12 device comes with a blade to split the fruit, a special seed-removing device and a slicing wand which cuts the whole fruit into even sections

One woman described the avocado slicer as ‘life changing’.

Another woman described the tool as being made from ‘good-quality plastic’ and said it was ‘easy to use’.

Millennials excited by the slicer have been touting it on TikTok as ‘the new must-have kitchen tool’.

‘I bought this because of TikTok. My husband laughed at me thinking it was a waste of money. He used it the other day. I had the last laugh as he now swears by it,’ one woman said.

Do you need a purpose-made avocado slicer?

Another stopped short of calling the slicer life-changing but admitted it felt ‘safer’ than using a knife.

‘The blade to cut the avocado is perfect for the task at hand, but not sharp enough to be dangerous. The middle section to extract the seed has four blades so actually works far better than a knife, lastly the slicing tool is pretty good,’ they wrote.

‘Still a bit messy but that’s avocados. Perfect for someone not to confident with a knife or perhaps an older relative,’ they added.

TikTokker ‘Connorsmum’ is just one of the avocado lovers showing off the device online.

In her instructional video the mum shows how to use each of the blades on the handy kitchen tool.

First she uses the green blade on the end of the slicer to open the fruit. 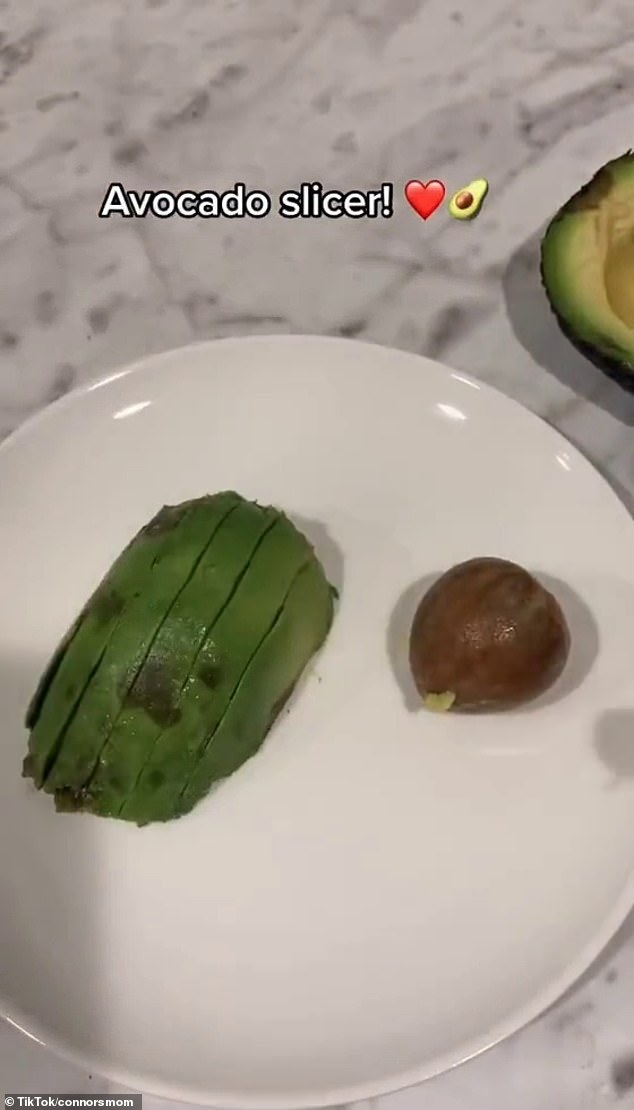 Then she demonstrated how the patented pit remover works to remove the massive seed at the centre of her avocado.

Lastly she used the slicing wand to cut the avocado into even slices with one swipe of her hand.

‘Omg you need this,’ one woman commented on the video, tagging a friend.

While another scoffed the ‘new invention’ was no more useful than a knife.

On the Amazon reviews one dissatisfied customer dropped a two-star review on the slicer,

‘I gave this. Two stars, one was because it looks nice, the other because it cut through the avocado skin. That’s all it was good for. Didn’t remove the stone with circular area and the slicer couldn’t even make a dent in a ripe avo,’ one person wrote.

The review stood out against all of the five-star reviews on the product page.