Hundreds of anxious shoppers wearing face coverings and keeping their physical distance lined up overnight to be the first to shop at the reopened Downtown Disney mall on Thursday four months after closing due to the coronavirus pandemic.

The outdoor shopping center near the Disneyland theme park welcomed its guests at 10am local time on Thursday after they went through temperature checks at the entrances to the complex.

The public appeared eager to resume business as usual despite the newly implemented health protocols that were mandated as part of the reopening of public spaces, according to The Orange County Register.

A couple enters Downtown Disney in Anaheim, California, on Thursday as the outdoor shopping complex near the Disneyland theme park reopened after being idled for four months 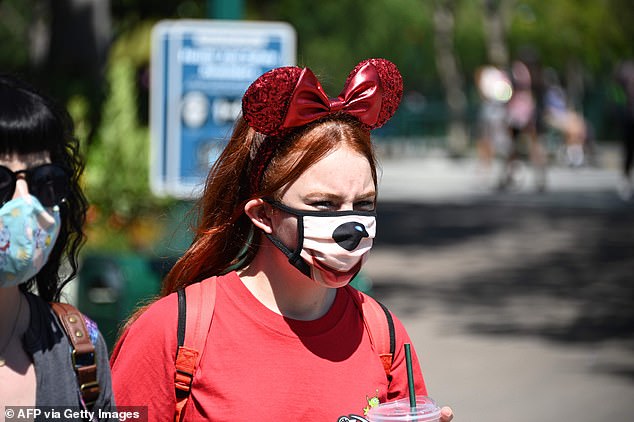 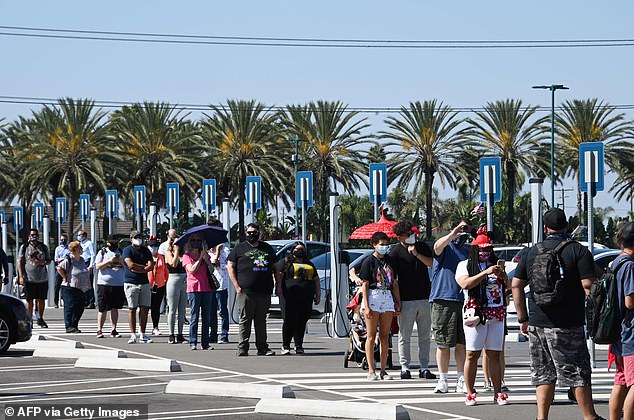 An estimated 1,000 shoppers waited on line when the complex opened on Thursday morning 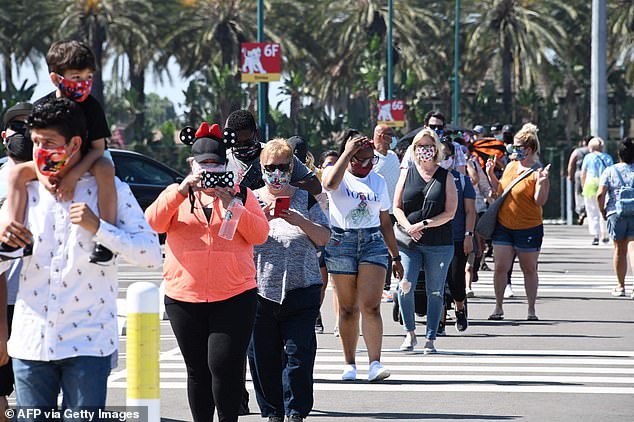 The reopening of the mall is a welcome consolation prize for Disney fans who had been looking forward to the Disneyland theme park’s scheduled July 17 restart.

But the reopening of the theme park was postponed, as was the planned July 23 relaunch of two Disney-owned hotels. No new dates have been announced.

Downtown Disney District – which borders the world-famous Disneyland and Disney California Adventure theme parks near Los Angeles – is the first part of the sprawling resort to reopen.

It threw open its shops and restaurants to eager fans after almost four months of coronavirus-mandated limbo.

But with the theme parks still shuttered as coronavirus cases climb in the US state, visitors were restricted to the World of Disney souvenir store and a number of cafes and shops.

Disneyland is the world’s second most-visited theme park, trailing only its sister park in Florida, and draws tens of thousands of visitors each day.

It remains the only Disney theme park without a scheduled reopening date.

Disney’s Paris and Orlando parks plan to start up within the next week.

California, the most populous US state, is recording more than 8,000 new COVID-19 cases each day, with nearly 290,000 infections confirmed to date.

Despite a huge surge of Floridians testing positive for the new coronavirus in recent weeks, two of Disney World’s four parks are reopening on Saturday.

When they do, visitors to ‘The Most Magical Place on Earth’ will find new rules in place. 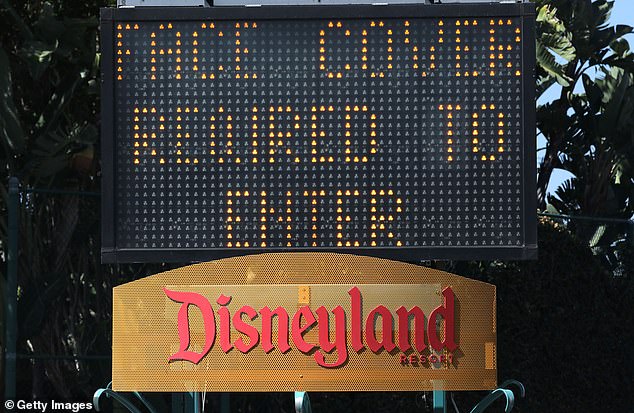 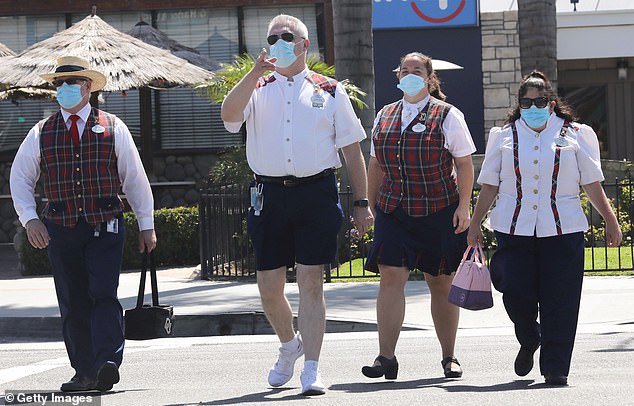 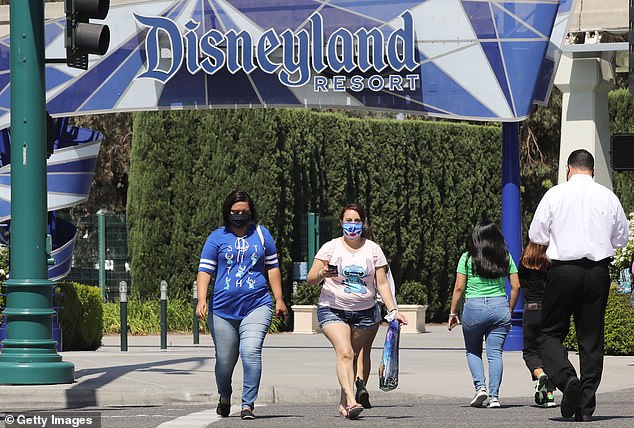 Shoppers maintained physical distancing throughout the complex, where more than a dozen shops opened up 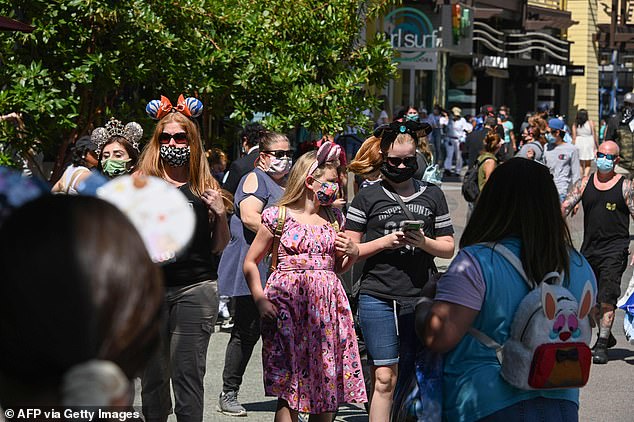 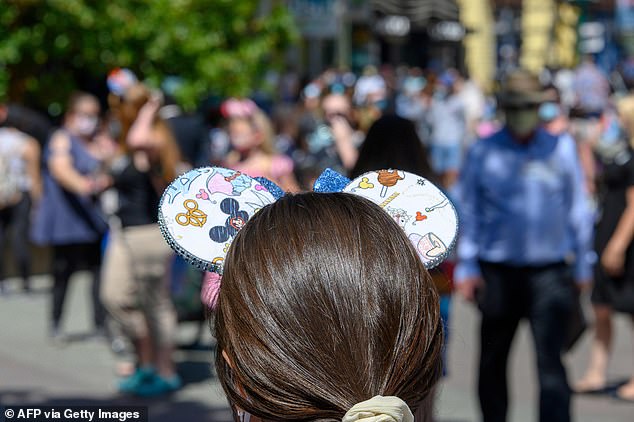 There will be no firework shows or parades – those would draw too many people together – and both visitors and employees will be getting temperature checks when they enter.

Everyone has to wear a mask and maintain social distance. No hopping between parks is allowed, for the time being, and visitors will need reservations to enter.

Disney employees won’t be allowed to take photos of visitors in front of Cinderella’s Castle since it involves touching the tourists’ cameras.

There will be no live shows since the reopening has caused a labor dispute between Disney World and its actors and singers. 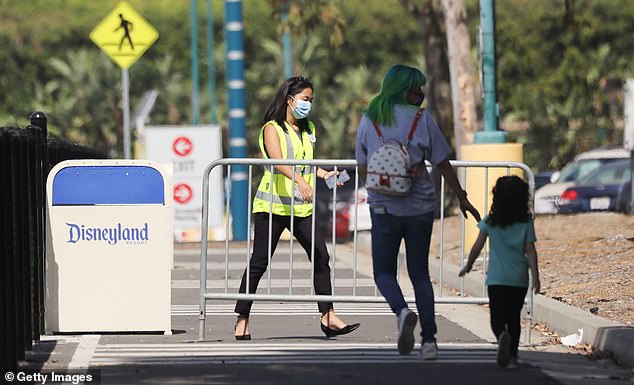 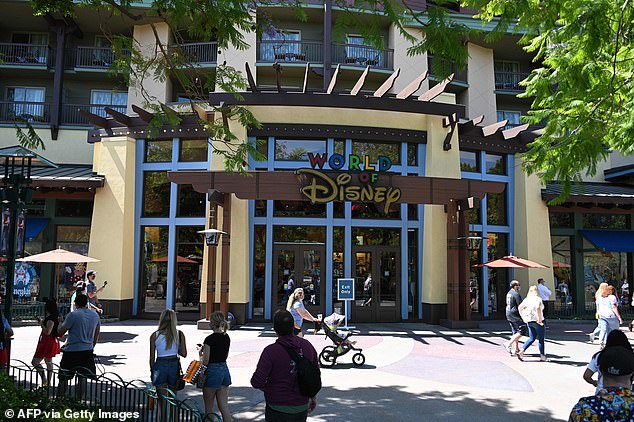 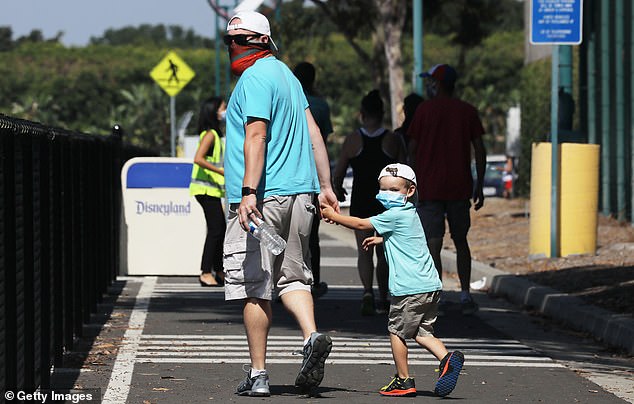 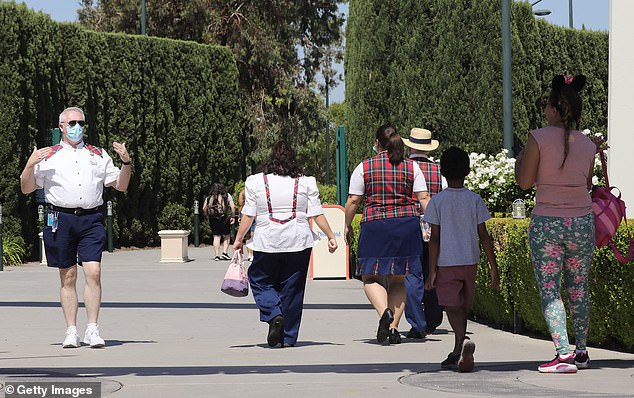 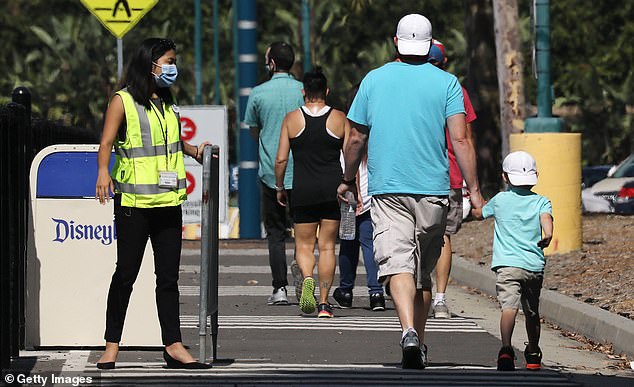 Guests make their way by foot to Downtown Disney in Anaheim, California, on Thursday 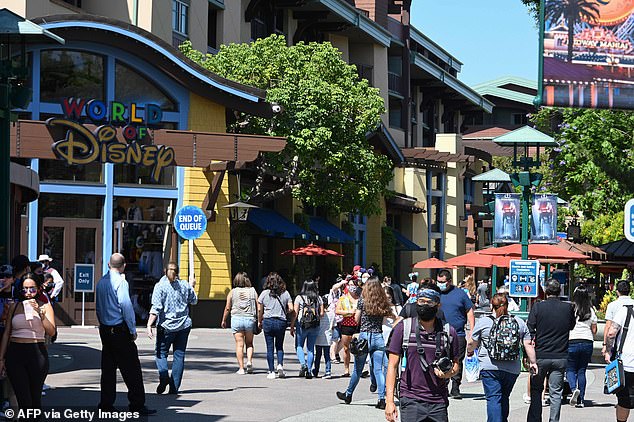 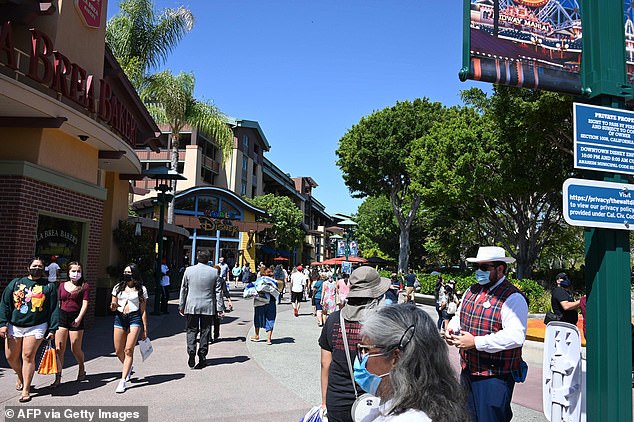 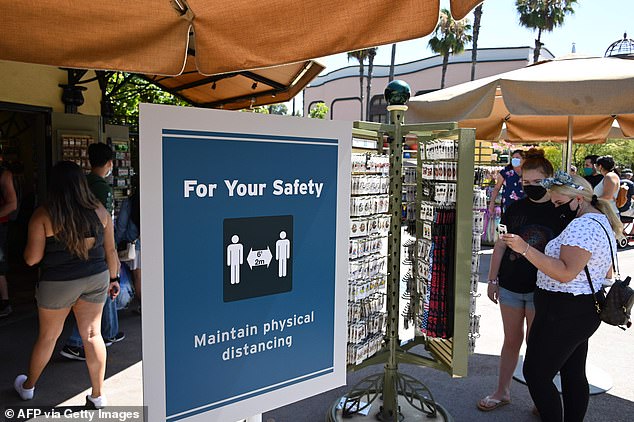 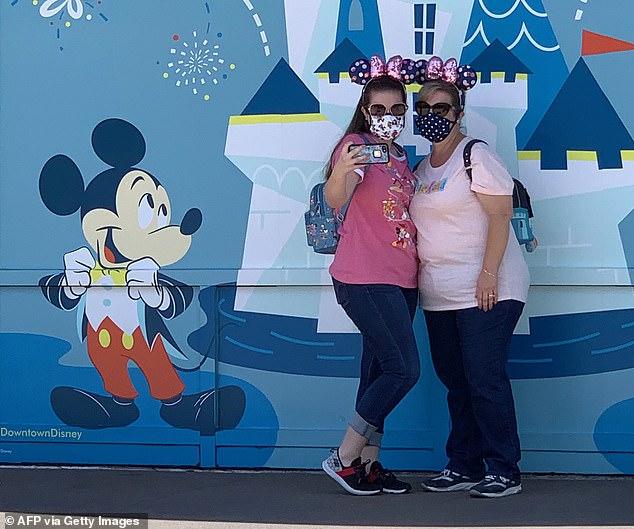 ‘That is a very different Disney World than the one you worked at back in March, and that is because of the need for safety,’ Eric Clinton, president of Unite Here! Local 362, told his members in a recent Facebook discussion.

Magic Kingdom and Animal Kingdom will reopen on Saturday.

All of the parks closed in mid-March in an effort to stop the virus’s spread. Disney World’s crosstown rivals, Universal Orlando and SeaWorld Orlando, also closed in March but have been back open for several weeks after instituting similar rules to protect employees and customers from the virus.

Also this month, the NBA and MLS are restarting their seasons at Disney World, which has a massive sports complex featuring multiple playing arenas.

Disney has been opening back up its parks around the globe for the past two months.

In May, the company opened Disney Springs, a complex of shops, restaurants and entertainment venues in Lake Buena Vista.

Only Disneyland in California delayed its plans to reopen in mid-July, saying it was awaiting guidelines from the state.

The union that represents Disney World actors and singers wishes the Florida resort would do the same until workers can be tested on a regular basis.

Florida and other Sunbelt states have seen recent surges in coronavirus cases, and unlike other Disney workers, the singers and actors can’t wear face masks when they perform.

The actors and singers initially were called back to work, but that invitation was rescinded last week after the union made public their concerns about the lack of testing, according to Actors’ Equity Association.

For the parks to reopen, ‘the epidemic must be under control with contact tracing … and that is not the case in Florida,’ said Brandon Lorenz, a spokesman for Actors’ Equity Association.

‘We don’t believe the workplace plan is safe. It has risks not just for the workers but for the guests.’

In a statement, Disney on Thursday said, ‘We are exercising our right to open without Equity performers.’

Other union leaders are confident in the new safety measures.

Clinton, whose members are custodians, housekeepers and park greeters, said a visit to Disney World is now safer than going to the grocery store.

‘Will I be safe at work? The short answer to that is, “Yes”,’ Clinton told his members.

Firefighters and paramedics for Disney World’s private government are expecting to see more heat-related calls from visitors due to the mandatory mask-wearing.

‘With the masks and summer in Florida, that’s going to be interesting,’ said Tim Stromsnes, an official with the Reedy Creek Professional Firefighters, Local 2117. “A lot of people aren’t used to our heat and humidity.”

Florida Governor Ron DeSantis said earlier this week that he believes Disney is well-prepared for the reopening.

‘I have no doubt it is going to be a safe environment,’ DeSantis said.

‘I am really impressed with what Universal has done and I have looked at Disney´s plan and it is very, very thorough.’

Disney spokeswoman Andrea M. Finger said in a statement on Wednesday that the company is ‘moving forward carefully and methodically.’

She said seven unions representing thousands of staff have signed agreements to return to work.

Because of the limits on attendance, new ticket sales and hotel reservations are temporarily on hold so people already with tickets and reservations get first dibs.

Even some who already had reservations ran into problems.

Shortly after the shutdown, Disney fan Lloyd Stevens and his partner, Andy Rogow, booked a room at the budget Pop Century Resort for next week.

But when they called recently to confirm, they were told the only availability was in a much more expensive resort. 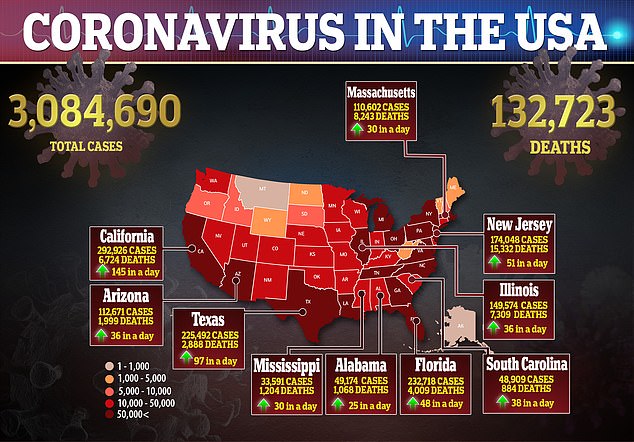 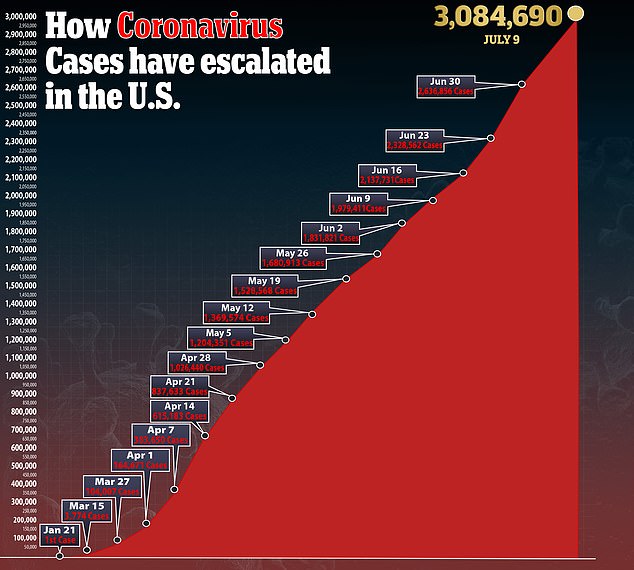 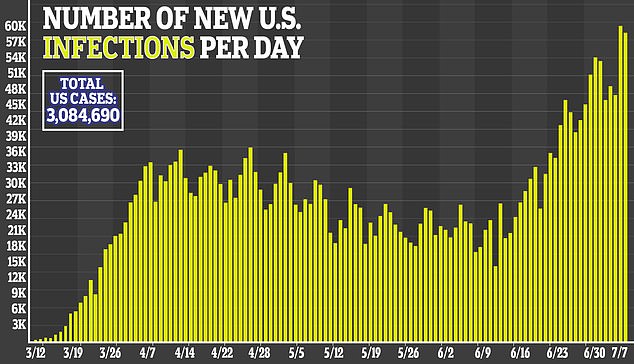 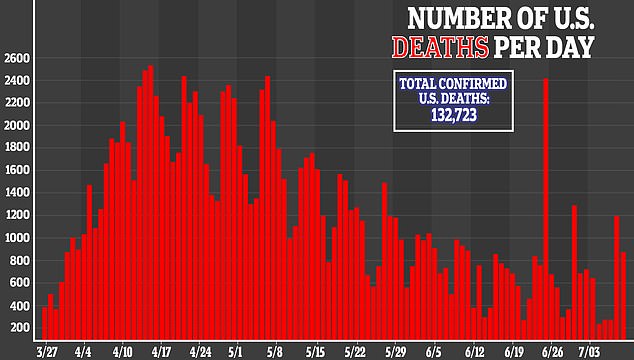 ‘We had to cancel everything,’ Stevens said.

‘I was hoping to get there in midweek and have it not crowded. But with cases rising anyway, I guess we’re kind of glad it didn’t work out.’

Disney World workers have been at the parks already for several weeks, going over hygiene protocols to stop the spread of the virus, sanitizing handrails and consoles and reviewing other changes such as new break rooms that now only accommodate four people at at time.

In addition to a thermometer, workers were given three face masks and a plastic face shield, equipment that made it difficult for some of them to recognize their colleagues without checking their name tags, said Hollywood Studios worker Scott Dudas.

In a Facebook discussion with colleagues, Dudas said he was reassured by the face shields, which can be used when a worker needs to get in close contact with guests, such as making sure children are the proper height for rides.

‘I think from a safety aspect, everyone should be on board to feel comfortable with everything in place,’ Dudas said.