Shopping at your fingertips: We test the UK’s first biometric bank card

The woman in the shop stares at me in disbelief as I declare that I’m using my fingerprint to pay for my new watch.

And, when the payment fails three times in quick succession, I’m quietly confident she thinks I’m a con artist.

In fact, I am one of only 200 people in the UK trialling a brand-new ‘biometric’ debit card, which is controlled by fingerprint.

Launched by NatWest last week, its aim is to make payments easier, faster and much safer.

Contactless technology already allows shoppers to spend up to £30 without having to enter their Pin.

But, with NatWest’s new card, there will be no need to enter a Pin at all — even when spending more than the £30 limit.

The biometric card works in the same way as a contactless one, but, as you tap it against the machine, you must also hold your thumb on a small panel on the bottom right of the card.

If you want to splash out on something that costs more than £100, you must insert the card into the machine while holding your thumb on the same spot — this is so that the machine can read the chip, offering another level of security.

Fingerprint technology isn’t new. Many banks, including Barclays, Santander, HSBC, Metro Bank and First Direct, already allow you to log in to their banking apps using only your fingerprint. But NatWest is the first UK bank to offer the feature on a debit card.

Setting up the card is easy: you slide it into a thin, black, plastic sleeve and touch the panel with your thumb or finger five times. When it’s ready, a green light flashes.

The first time you use the card, you must enter your Pin. 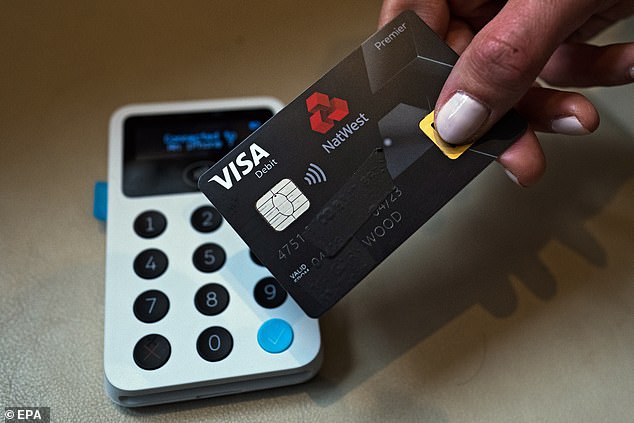 The biometric card works in the same way as a contactless one, but, as you tap it against the machine, you must also hold your thumb on a small panel on the bottom right of the card

You can register only one print to a card. I choose my right thumbprint, as it feels most natural.

Apparently, the card should still recognise my print even if my hands are wet or I cut my thumb — though it wouldn’t work if I was wearing a plaster.

First, I buy a Diet Coke for 75p. All goes well, so I buy another for a colleague.

As the items cost less than £30, I can tap the card against the contactless reader as normal.

The next day, I push the boat out and attempt to purchase a £47 Swatch watch. The cashier and I both hold our breath as I tap the card against the machine and press my thumb tightly on the panel.

But it doesn’t work. Instead, a message flashes up, telling me to swipe my card or use Chip and Pin.

The sales assistant looks bemused and suggests that I use my card the usual way. Determined to pay by thumbprint, I ask if I can try again. And again.

After the message appears a third time, with a queue forming behind me, the sales assistant begins to lose patience.

Perhaps the machine is the problem, she suggests.

But NatWest says the card should be accepted everywhere — without the need for shops to buy new payment terminals. 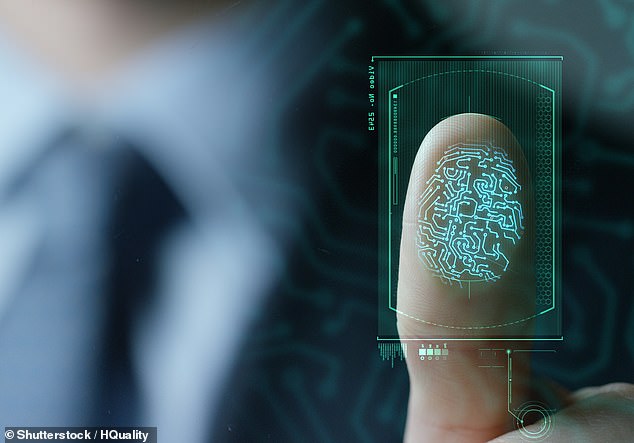 Biometric technology is not foolproof, however: the software can be tricked by fingerprint moulds made from plastic, glue or even gummy bears

I scurry out of the store watchless and walk a few doors down to try my luck in Boots.

This time, I head to the self-service till with my £34.99 hair dryer to avoid any embarrassment.

But again, the payment fails, and a message flashes up — this time saying that I have reached the limit of consecutive contactless transactions and need to enter my Pin. I do this, hoping it will get the thing working, and move on to Marks & Spencer.

Summer is coming, and I want my 18-month-old nephew to look beach-ready. A pair of dinosaur swim shorts, a striped beach suit and a cotton shirt-and-short combination come to £33.15 altogether.

Thumb at the ready, I tentatively press the card to the terminal — but, yet again, the payment fails. Frustrated, I explain my predicament to the sales assistant, Esther. She blames the machine and beckons over her colleague, Adrian.

The three of us pore over the card, then decide to try another machine. This time, I lay my thumb over the panel gently, instead of pressing it hard. The light turns green: I’m jubilant.

Experts claim biometric technology, including voice, fingerprint and facial recognition, is the future. Other countries are already storming ahead: paying using a selfie is common practice in China, and you can use ATMs with your fingerprint in Poland, India and Japan.

Biometric technology is not foolproof, however: the software can be tricked by fingerprint moulds made from plastic, glue or gummy bears.

And, unlike passwords and Pins, you cannot change your fingerprint if it is replicated.

‘Biometrics are a good step towards making systems more secure, as they make it more difficult for someone to access your information,’ says Chris Underhill, managing director of Equiniti Cyber Security.

‘It is an improvement, but we need to keep making strides.’

NatWest insists its card can’t be fooled by a 2D replica of a fingerprint and says prints are stored only on the card — not on a database that could be hacked. It adds that the initial feedback has been positive.

A spokesman says: ‘We are at an early stage of the pilot and, with customer feedback, we are shaping and improving the future experience.’