Shopping by voice on Amazon Echo could be a ripoff

In the name of convenience, Amazon and Walmart are pushing people to shop by just talking to a digital assistant.

Shopping by voice means giving orders to the Alexa assistant on Amazon’s Echo speaker and other devices, even if your hands are tied up with dinner or dirty diapers.

And next month, Walmart will start offering voice shopping , too, with the Google Assistant on the rival Home speaker.

FILE – This file photo provided by Amazon shows models of the Amazon Echo Show. With Echo Show, Amazon has given its voice-enabled Echo speaker a touch screen and video-calling capabilities as it competes with Google’s efforts at bringing ‘smarts’ to the home. Amazon has been ramping up efforts to get more people to shop using the Alexa voice assistant on Echo speakers and other Amazon devices. (Amazon via AP, File)

Such voice shopping hasn’t really caught on yet, but if it does, look out – you might never know if it’s offering you the best deal.

Because these devices can’t say much without tiring your ears, voice shopping precludes some of the savvy shopping practices you may have relied on to find the best bargains – in particular, researching products and comparing prices.

You’d be leaving much of the buying decision to Amazon, Walmart or other retailers.

Amazon has had more than a year’s head start, and dominates voice shopping. Google introduced shopping to Home in February, letting people order essentials from more than 40 retailers like Target and Costco under its Google Express program. Its partnership with Walmart means hundreds of thousands of items will be available to customers in late September.

With websites and apps, many customers place items in the cart, but change their minds before completing the order, said Lauren Beitelspacher, a marketing professor at Babson College in Massachusetts. Voice shopping eliminates those intervening steps.

And with Amazon so far ahead, voice shopping with Alexa is another way of getting you hooked on Amazon . Although Amazon allows some third-party ordering through Alexa, including pizza from Domino’s and hotels through Kayak, general shopping is limited to Amazon’s own store. If Alexa orders diapers for you just as you run out, for instance, Amazon locks in the order before you have a chance to visit Walmart.

‘You can’t get away from Amazon,’ Beitelspacher said. ‘I don’t know if gimmick is the right word, but (voice shopping) is part of a strategy to be omnipresent in consumers’ lives.’ 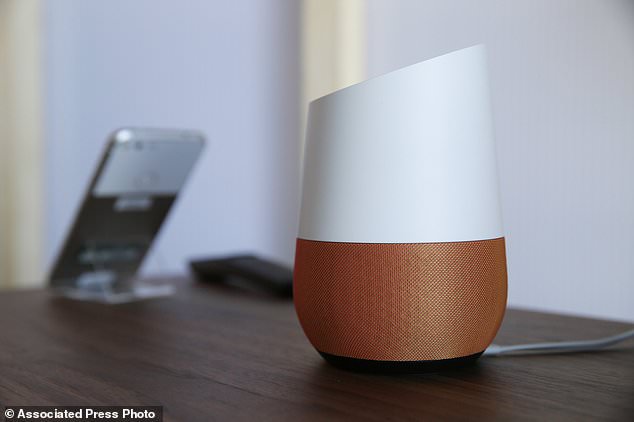 FILE – In this Tuesday, Oct. 4, 2016, file photo, Google Home, right, sits on display near a Pixel phone following a product event, in San Francisco. In the name of convenience, Amazon and Walmart are pushing people to shop by just talking to a digital assistant. Shopping by voice means giving orders to the Alexa assistant on Amazon’s Echo speaker and other devices, even if your hands are tied up with dinner or dirty diapers. And in September 2017, Walmart will start offering voice shopping, too, with the Google Assistant on the rival Home speaker. (AP Photo/Eric Risberg, File)

Ask Alexa to buy something, and it presents you with something you’ve bought before or an educated guess based on some undisclosed mix of price, satisfaction rating and shipping time. Amazon won’t provide more details. You can get a product’s average customer-satisfaction rating, but not specific reviews, even on screen-equipped Echo Show devices.

Brian Elliott, general manager of Google Express, says that with most affiliated retailers, personalization occurs as the assistant learns shoppers’ preferences, but the integration with Walmart will happen more quickly.

In some ways, shopping by voice assistant is a throwback to the days when you were largely limited to what sales representatives recommended at a physical store.

Amazon’s website gives you a lot of information about most products, from color options and sizes to the specific reasons other customers hated a product you’re considering. You’re able to compare similar items and choose something cheaper if you’re willing to sacrifice some features or take a chance on an unknown manufacturer.

And, of course, you can also compare Amazon’s prices with those of other online merchants.

But with Amazon’s voice shopping, it’s back to what the company’s representative recommends. Alexa can handle only a portion of Amazon’s full catalog, and its interactions with shoppers are constrained by the fact that listening and speaking can be a lot slower than reading and clicking.

And while Amazon’s website won’t necessarily list the cheapest option first either, the alternatives are easier to view on a screen.

Justin Evans, an engineer in Whitman, Massachusetts, bought oatmeal and smart plugs using Alexa to claim exclusive discounts, but he prefers browsing and reviewing products for general shopping. ‘I’m a less impulsive shopper than I think their target market is,’ he said.

Apple’s HomePod, which was released earlier this month, will take on Amazon’s Echo and Google Home.

It will have a higher price tag than the Amazon Echo range, which begins at $49 (£49) for the Echo Dot. 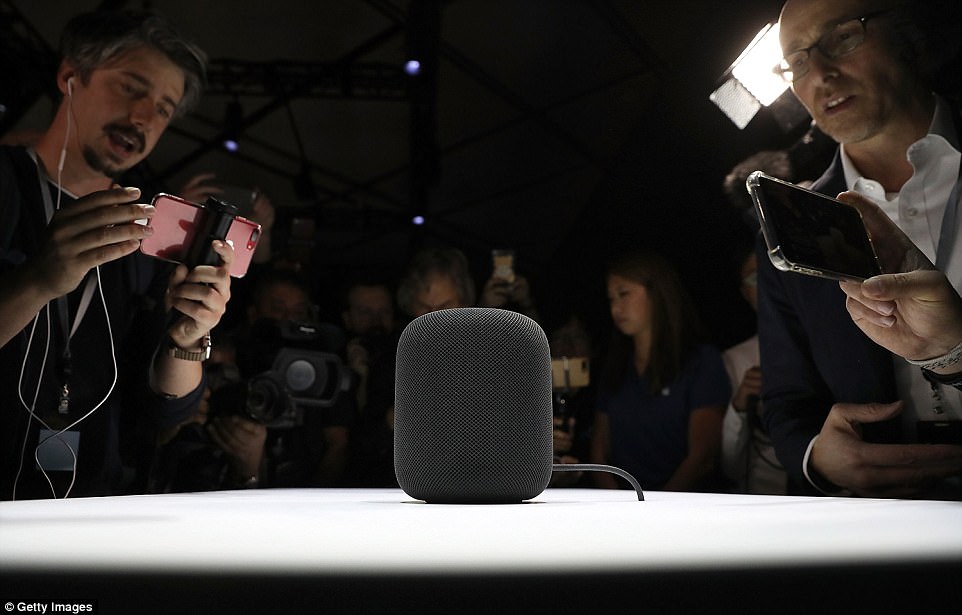 Apple’s HomePod (pictured), which was released earlier this month, will take on Amazon’s Echo and Google Home

Companies are aware that voice shopping takes getting used to. ‘It’s not natural to shout out a purchase desire and have it be fulfilled,’ said Ryne Misso of the Market Track retail research firm in Chicago.

Jenny Blackburn, Amazon’s director of voice shopping, believes it will catch on once people get used to it.

To get people started, Amazon has been offering exclusive deals through Alexa and a $10 credit on the first order. For its annual Prime Day promotion in July, Amazon gave voice shoppers a head start of two hours.

Amazon says voice shopping has grown in the year-plus it’s had it, though it wouldn’t release figures. ‘We’re really just getting started with it,’ Blackburn said in an interview.

You can use Alexa for most items that come with free shipping through Amazon’s Prime loyalty program, but Blackburn said it works best for products with ‘lightweight decisions,’ such as batteries, cat food and paper towels. Sure, Alexa can order you a TV, but you’ll probably want to do some research first. 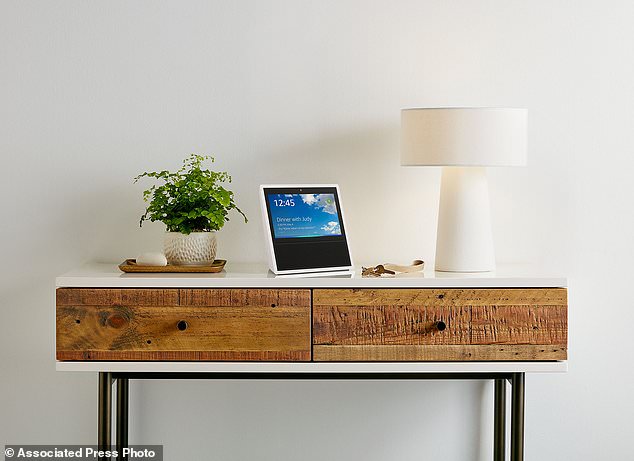 FILE – This file photo provided by Amazon shows an Amazon Echo Show on display in a living room setting. With Echo Show, Amazon has given its voice-enabled Echo speaker a touch screen and video-calling capabilities as it competes with Google’s efforts at bringing ‘smarts’ to the home. Amazon has been ramping up efforts to get more people to shop using the Alexa voice assistant on Echo speakers and other Amazon devices. (Amazon via AP, File)

Nels Romerdahl, a student at the University of Hawaii in Maui, said Alexa can be a big improvement over Amazon Dash buttons – plastic gadgets that can you place around the house and press anytime you need to reorder a specific item. But he doesn’t use either Alexa or Dash for recurring items – he stocks up when his parents visit Costco every few weeks.

To prevent inadvertent orders, like the widely circulated report of a 6-year-old girl who had Alexa order a dollhouse and sugar cookies for Christmas, Amazon lets you set up a PIN you can recite to the assistant.

To boost comfort, Amazon promises free returns on voice orders; normally, Amazon charges a shipping fee for returns unless the company’s at fault.

That might not satisfy everyone. Los Angeles attorney Pam Meyer, who bought some dog treats through Alexa to claim her $10 credit, said she’d want something like a cash-back guarantee when Alexa doesn’t offer the best price.