Products featured in this article are independently selected by This is Money’s specialist journalists. If you open an account using links which have an asterisk, This is Money will earn an affiliate commission. We do not allow this to affect our editorial independence.

Savers are reaching a crossroads when it comes to deciding where to stick their money.

The best fixed-rate savings deals are fast approaching 5 per cent potentially tempting an increasing number to move cash away from easy-access savings accounts.

Over the past two years, savers have largely focused on keeping money within reach due to the lack of incentive to fix, with rates low.

Decision time: Savers typically feel they need to make between 4 and 5 per cent more in interest than their existing easy-access rate to make fixing their savings for a year worthwhile.

As of July, four in five Britons held their savings in either a standard easy-access deal or an easy-access cash Isa, according to Paragon bank’s analysis of more than 30 leading savings providers.

However, according to Paragon, it has seen a shift in recent months, with many more savers switching to fixed-rate deals in search of higher returns.

At present, about 80 per cent of all new cash going into the platform is heading into fixed term deposits. This is up from around 50 per cent a year ago.

Sarah Coles, of Hargreaves Lansdown, said: ‘We are rapidly reaching the inflection point in the savings market.

‘The gap between what we’re making on our cash and what we could make in a fixed rate account, is reaching the point where people say they’re prepared to fix.

‘The overwhelming majority of our savings is in easy access accounts, and while this is the right place for an emergency fund of between three and six months’ worth of essential expenses, once you hold more than this, it’s worth at least considering tying up some of the money in return for a higher rate of interest.’

When does a fixed-rate deal become worth it?

Savers typically feel they need to make between 4 and 5 per cent more in interest than their existing easy-access rate to make fixing their savings for a year worthwhile, according to a survey carried out by Hargreaves Lansdown earlier this year.

For many, with cash tied up in savings accounts paying 0.5 per cent or less, this may mean that the time for a fixed-rate transition has now arrived.

As much as £461billion is dwindling in easy-access deals paying less than 0.5 per cent, according to Paragon Bank, whilst a further £267billion is stashed away in current accounts earning no interest at all.

The best one-year fixed rate deal on the market currently pays 4.15 per cent, courtesy of Investec, whilst Nationwide has just launched a 4.75 per cent three year deal.

Coles adds: ‘For someone whose cash is languishing in a branch-based high street easy access savings account, rates are knocking on that door.

‘Most are paying around 0.4 per cent, so a switch to the most competitive one-year fix would make them 3.71 per cent more in interest. Those in Barclays Easy Saver could make 3.95 per cent more.’

However, moving from easy-access savings to a fixed rate deal isn’t necessarily always about the interest rate on offer.

Half of those using easy-access savings do so to keep all their money handy just in case they need it, according to analysis by Hargreaves Lansdown’s research, while it found a quarter stick to easy-access because it makes them feel more comfortable.

The fact that rates are rising on almost a daily basis will also be tempting savers to take a ‘wait and see’ approach, particularly if fixing now might mean they miss out on even better deals in the future. 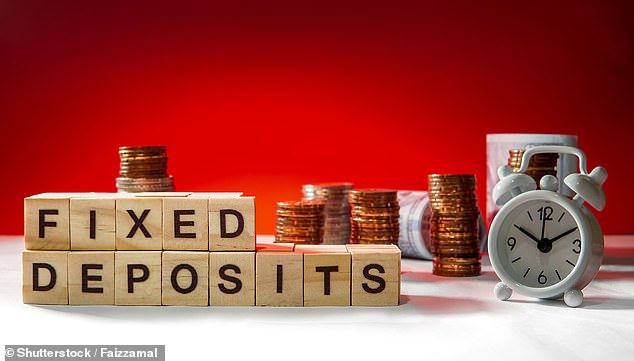 Cometh the hour: 80 per cent of all new cash going into Hargreaves Lansdown’s savings platform is heading into fixed term deposits. This is up from around 50 per cent a year ago.

For those, who prefer to remain in easy-access savings it would be worthwhile to ensure their money is with a provider paying a top rate.

While many of the major banks are paying pitiful returns to savers, the best easy-access savings rates have jumped to as high as 2.5 per cent, with more than 13,300 increases made to variable accounts in the past nine months alone.

Yesterday, Nationwide Building Society upped the rate on its one-year triple access online saver to 2.1 per cent for 12 months.

This puts it among the top paying easy-access deals on the open market, bettered only by Al Rayan Bank’s 2.35 per cent deal and Yorkshire Building Society’s 2.5 per cent deal – albeit the latter being only on balances up to £5,000.

It is worth pointing out that rates, whether in easy-access or fixed rate savings, come nowhere near to matching annual inflation, which currently sits at 9.9 per cent.

This means the value of Britons savings continues to be eroded in real terms.

How high will rates go?

Despite rates surpassing 10-year highs, many will be holding back in expectation that the market is set to rise further.

Swap rates suggest that one-year fixed deals will hit 5 per cent over the coming months.

When will you use a one-year fixed savings deal?

Swap rates are an agreement in which two counter parties, for example banks, agree to exchange one stream of future interest payments for another, based on a set amount.

Swap rates have risen dramatically over the past three months as the market is assuming rates will need to continue to rise to curb inflation.

Tom Higham of Hargreaves Lansdown, said: ‘We can look to the interest rate swaps market for an indication of truer prices of money at different terms.

‘Banks use these markets to manage interest rate risk by changing their exposure between floating and fixed rates, much like how individuals might use fixed rate mortgage deals to lock in a rate.

Higham explains that a lot depends on the competition between challenger banks and the levels of cash they need to pull in from savers to fund their lending activities.

He adds: ‘This isn’t going to happen overnight. No bank wants to pay more than they have to in order to attract new deposits, so they’re inching up a fraction at the time, taking it in turns to push very slightly ahead to attract more deposits.

‘They’re also holding back, because on the other side of the equation is demand for loans. As rates rise, people will be less keen to borrow at a higher rate, so they won’t need to raise as many deposits in order to fund the lending.

‘However, there are a few things that would speed it up. If one bank breaks ranks in an effort to attract significant deposits, it will encourage others to follow suit and put up rates.

‘Meanwhile, if a much larger bank sits amongst the most competitive on the market, it creates even more upset.

‘They will take an outsized portion of the deposits available, creating more pressure from those just behind to get out in front, sending savings rates higher more quickly.

‘So, looking at who at the top of the rates tables can also help indicate what’s likely to happen next.’