Should we all take folic acid to prevent a heart attack?

Any woman who has been pregnant will know the importance of taking folic acid pills.

For decades, a daily 400 microgram (mcg) dose has been recommended even if a woman is simply trying to conceive — and if she then becomes pregnant, to continue taking it for the first 12 weeks.

The reason is that folic acid, a man-made version of the B-vitamin folate, protects babies in the womb against spinal and brain deformities.

Did you know? The body needs a regular supply of folate (about 200mcg a day for an adult) to produce healthy red blood cells, and most people get what they need from their diet

But now the humble vitamin — which costs as little as 3p per tablet — could have a much bigger role to play when it comes to our health.

A major new study published last week by scientists from the University of Toronto found that pills taken by millions of people in Britain — from multivitamins and vitamin D, to calcium and vitamin C — won’t reduce the risk of heart disease or help you live longer. The exception was folic acid.

The findings, published in the Journal of the American College of Cardiology, were based on a review of the results of all previous major studies. The benefits of folic acid emerged in a large study from China included in the review.

Fewer than 2 per cent of patients on folic acid supplements and blood pressure pills for at least four years suffered a stroke, compared with nearly 6 per cent of the other group.

The findings have reignited the debate over whether folic acid should be more widely recommended by doctors. Compelling: A 2014 U.S. study published in the journal Cerebrovascular Diseases found taking daily folic acid supplements could cut the risk of a heart attack by around 25 per cent

Folic acid is a form of folate, a type of B vitamin found in foods such as green vegetables including spinach, broccoli, asparagus and Brussels sprouts, and beans, citrus fruits and wholegrains. Many breakfast cereals and some types of bread are also fortified with folate.

Successive governments have ignored scientists’ advice and not required the fortification of bread and flour with folic acid, as many other countries including the U.S. and Australia have done, primarily to prevent birth defects.

The body needs a regular supply of folate (about 200mcg a day for an adult) to produce healthy red blood cells, and most people get what they need from their diet.

That’s equivalent to six or seven asparagus spears a day, or a dozen Brussels sprouts. As we cannot store the vitamin in our body, we need it in our diet every day.

However, there are some groups who need additional amounts. Patients taking the drug methotrexate, often prescribed for rheumatoid arthritis, also need to take supplements to offset its side-effects, which can damage the way the body absorbs folate. 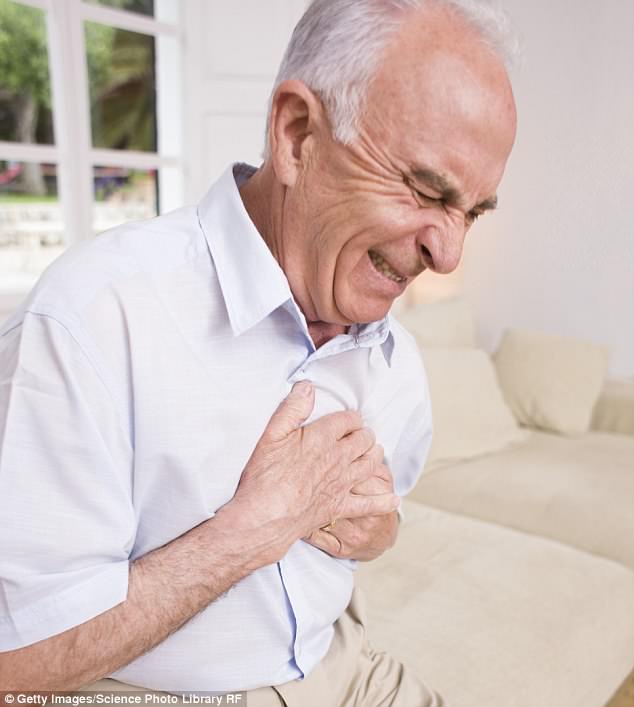 Side-effects: Taking too much folic acid can cause stomach cramps, diarrhoea and insomnia

Some older people may also lack folic acid. But should others be taking the pills to reduce the risk of heart attack and stroke?

Studies highlighting the potential benefits for cardiovascular disease first emerged more than 20 years ago. These suggested the vitamin pills might work by lowering levels of homocysteine in the blood, a type of amino acid that occurs naturally as a result of proteins in the diet being broken down in the body. Folic acid releases an enzyme that stops the formation of homocysteine.

Some studies suggest eating excessive amounts of protein — such as red meat — can increase homocysteine levels, and that this damages the walls of arteries, leading to increased risk of heart disease and stroke.

A 2014 U.S. study published in the journal Cerebrovascular Diseases found taking daily folic acid supplements could cut the risk of a heart attack by around 25 per cent.

It concluded that folic acid supplements had no additional impact on the risk of suffering or dying from a heart attack and only a minimal impact on stroke. In fact, it said, doctors would need to treat 143 people for more than five years to prevent one stroke.

Furthermore, the Chinese study on which the recommendation is based is flawed, claims Catherine Collins, a registered NHS dietitian and spokesperson for the British Dietetic Association.

For example, she says, researchers failed to take account of whether patients did regular exercise — if they did, this could be the reason why some had lower stroke risk, not taking folic acid.

Also, the study failed to allow for how much folate there was in each person’s diet. If they ate plenty of greens, this could be why their stroke risk was lower instead of popping folic acid pills. In other words, there is little proof it was the supplements having the benefit.

But one leading cardiologist believes the evidence on stroke at least is overwhelming.

David Wald, a professor of cardiology and a consultant cardiologist at Barts Health NHS Trust, says the case for supplementing diets with folic acid is conclusive.

Professor Wald was involved in a study nearly 20 years ago which showed harmful homocysteine levels could be lowered by taking folic acid and that the minimum effective dose was 800mcg a day — four times the recommended daily allowance for an adult.

Taking too much folic acid can cause stomach cramps, diarrhoea and sleep disorders. But the Department of Health says anything up to 1 milligram (or 1,000 mcg) is perfectly safe.

‘At this level, there are no adverse effects but homocysteine levels are reduced,’ says Professor Wald. ‘One would have to eat approximately 4kg of broccoli to get the equivalent amount of folate, which is impractical. I take a daily supplement of 800mcg to protect myself against strokes and think most people should do the same.’

According to Professor Wald, one reason research has failed to show any major benefit in the prevention of heart attacks is because many patients in trials were also taking aspirin.

Folic acid and aspirin can both lower levels of platelets — cells involved in the clotting process — reducing the chances of a life-threatening clot blocking the blood flow to the heart.

In other words, the potential benefits of folic acid were masked by those of aspirin.

‘If you look at the trials where patients did not take aspirin, then folic acid did have an impact on heart attack reduction.

‘But increasing folic acid intake could reduce the number of strokes by an additional 10 per cent.

‘The UK’s failure to fortify foods with folic acid has been described by some as a public health failure. Not only would it reduce the risk of birth defects, but I believe there would also be significant benefits in stroke prevention.’

Other experts believe folic acid could have a major impact on dementia, too.

Research by David Smith, professor of pharmacology at Oxford University, suggests that giving patients with mild cognitive impairment (a very early stage of Alzheimer’s) a daily supplement with folic acid and other B vitamins slows the decline in memory, and the rate the brain shrinks.

But only the patients with high homocysteine levels to begin with saw any benefit.

Professor Smith believes the NHS should routinely screen older people to see if they have higher homocysteine — using a £10 blood test — and advising those who do to take folic acid tablets.

‘It’s estimated up to 20 per cent of Alzheimer’s is caused by raised blood levels of homocysteine.

‘We’ve published a cost-benefit analysis which showed testing and treating this way would save the country many millions of pounds each year and have I presented these findings to Public Health England and to NICE.

‘Neither showed any interest, even though many thousands of elderly will suffer from dementia who could well have been protected by this simple approach.’