Should we look to Tally’s gold-linked account to beat inflation?

Rising inflation means cash savings are being eroded at present, and the Bank of England could be forced to act sooner rather than later to quash the problem.

Inflation is above target at 2.5 per cent and the bank believes it will peak at above 3 per cent and then subside, but some inflation hawks disagree and say it will stubbornly stick around.

Savers trawling the internet to try and track down the best accounts for their cash are faced with pitiful rates, prompting many to turn to riskier investments in a bid to try and make their money go further.

With interest rates at rock bottom, it is tough to know where to put your hard-earned cash, but a company called Tally Money thinks it has a novel solution.

Saving your cash from inflation? Tally Money claims to offer savers a solution to the rising cost of living

The London-based group denominates cash from bank accounts and debit cards into an account, and each ‘Tally’ is then valued at one milligram of physical gold. The physical gold is holed up in Brinks vaults in Switzerland.

For some savers, the idea of having a physical asset like gold secured in a vault will provide comfort. It is possible that, in some circumstances, having cash tied up in gold could help savers ride through times of high inflation and market volatility.

Equally, it is possible that gold won’t do well and you could lose more than you would to inflation.

Tally’s top brass think its app and debit card will appeal to savers who want to try and protect the value of their savings from rising inflation. Like any asset, including oil for instance, the price of gold can fluctuate, but some people think its longer-term prospects are generally fairly good and stable.

On its website, Tally says: ‘Tally was born from the belief that people should be able to hold money in a bank account that benefits the customer, not the bank.’

The firm is keen to stress that Tally is not a cryptocurrency, or a multi-currency wallet that dabbles in gold or silver, or a trading app. Instead, it claims to be the ‘world’s first non-fiat personal bank accounts.’

Customers can use the Tally app and have a physical debit card, which can be used at all establishments, online sites and ATMs that accept Mastercard.

Savers can open a Tally account by downloading the app and confirm their identity using photo identification. The company claims most accounts are opened within ‘seconds’, but some could take longer.

Any cash deposited  will then be automatically converted into ‘Tally’, with, as mentioned earlier, each ‘Tally’ equal to the value of one milligram of physical gold.

Savers can then spend their Tally as digital cash, by for example, making a transfer to someone. Tally can also be transferred to standard high-street bank and building society accounts by using  a sort code and account number. 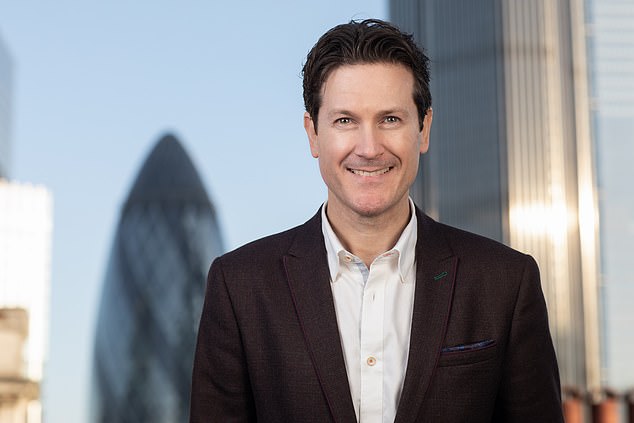 In charge: Tally’s founder and boss Cameron Parry told This is Money he’s confident about the company’s prospects

If you want to stash some Tally away for safe keeping, you can open a digital ‘Safe’, select a personalised name and image for it and select how much you want to move to it. Anything in the ‘Safe’ can be moved back to the main account at any time.

On the issue of withdrawing Tally from cash machines around the world, the group says on its website: ‘You can use your Tally Debit Mastercard to withdraw money from your Tally bank account at cashpoints around the world. And we don’t charge you to do so – no matter which currency or country you’re transacting in.’

What are the potential benefits of saving like this?

Conventionally, gold has often been viewed as a ‘safe haven’ for cash, and some people like to know they have a physical asset stashed away in an ultra-secure vault somewhere.

Over the past two decades, gold has increased in value by over 600 per cent, according to Tally. It says the pound has, over the same period, devalued by 87 per cent. 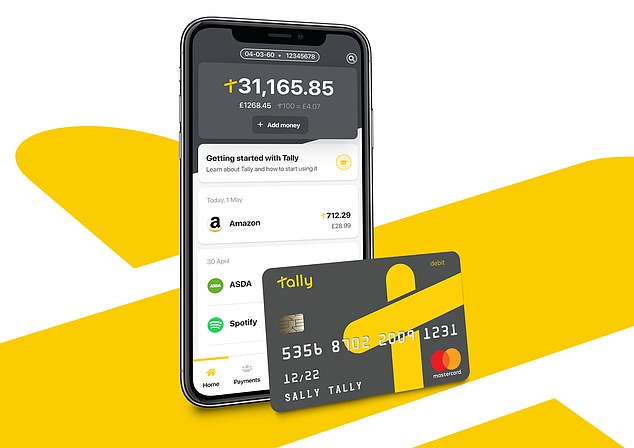 How it works: ‘Tally’ is valued at one milligram of physical gold, which is housed in a vault in Switzerland

Tally claims to be different from traditional banks and says it gives consumers ‘full ownership and control’ of their cash.

It believes that as the value of Tally is the current gold price, customer savings are ‘protected from inflation and bank risk, as well as political and economic uncertainty.’

It adds: ‘And Tally is a full-reserve banking system so customer deposits are not lent out – their money stays put.’

The group’s accounts are issued under a regulated E-Money Institution.

Will this idea really take off?

Tally only officially launched its app and card this week after a trial last year, so it is still early days.

Explaining to This is Money why it thinks Tally will appeal to people, the company said: ‘As people start to sense the coming consequences of all the recent QE, current near-zero interest rates, and inflation now starting to be felt in consumer goods, people will pay more and more attention to what is happening to the value of their money.

Should the Bank of England raise interest rates sooner rather than later?

‘As word spreads that bank customers can now protect and grow their savings in gold-based money (with the familiarity and and ease of a bank account) rather than the lose-lose situation savers are now caught in with traditional bank accounts paying near-zero interest in an environment of rising inflation, the number of Tally account holders should gradually then rapidly grow.’

Boss and founder Cameron Parry told This is Money he is confident of the firm’s prospects.

He said: ‘Saving money used to be a common sense thing and people still know they need to save for their family’s financial wellbeing.

‘But the way the current banking system devalues fiat currency (i.e. pounds) over time and with zero interest being paid by banks, saving money in a traditional bank account makes no sense anymore. Tally addresses the biggest problem in banking, the money itself.

‘And Tally is currently the only alternative for savers. It’s specifically designed to protect and benefit the customer, not the bank. With safe, secure and easy to understand money.’

Any points to think about before taking the plunge?

Tally charges a one-off joining fee of £20, or £2 a month. At the moment existing Tally customers can invite their friends and family to join with no joining fee.

The company also imposes an ‘account keeping fee’ of 1 per cent a year, calculated daily and charged monthly. So, for instance, it will be 83p per month on £1,000 of Tally. The group says this covers ongoing security, storage, insurance, and operational costs.

Tally insists that if the price of gold increases against pounds by more than 1 per cent a year, then ‘the customer is in front.’

The company says: ‘We don’t charge you to move funds in and out of tally, and there are no transaction costs and no FX margins added, at home or abroad. Not even when using your TallyCard at an ATM.’

Like any bank account issued under an E-Money licence, Tally accounts are not covered by the Financial Services Compensation Scheme.

But, the company says: ‘With Tally, the asset (i.e. physical gold) that underpins the money is real, securely vaulted in Switzerland, held on behalf of Tally customers under a custodial arrangement with the added protection of a security trust structure.

‘So, whilst Tally is not covered by the FSCS, it is not limited by it either. This means deposits up to, and in excess of, £85,000 are protected.’

Something else to consider is whether having your cash tied up in gold will be beneficial for you.

The value of your money will fluctuate according to the price of gold and not to the value of the pound. This could prove to be beneficial or a drawback in the long run, depending how prices pan out.

Making decent money from savings and investments can be tricky, and there may be other potentially more lucrative options to consider, depending on your circumstances.

It is always best to get proper financial advice and do some serious homework of your own before taking the plunge with any saving or investing decisions. 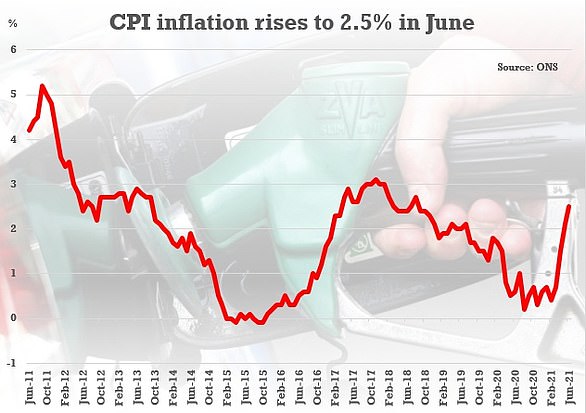 Inflation is a hot topic at the moment and this week figures from the Office for National Statistics revealed that the cost of living jumped by 2.5 per cent in the year to June. This was a bigger leap than most analysts and City experts predicted.

The cost of food from shops, eating and drinking out now cost more, while clothing and footwear, usually cheaper at this time of year, went up in price too.

Second-hand car prices also increased between May and June this year, whereas in recent years, they have fallen.

Before the pandemic hit, UK inflation was around the 2 per cent mark, which is the rate the Bank of England aims for.

But, as with everything else, Covid has played havoc with headline inflation figures, and they are now on the up.

Rising inflation, as well as being bad news for savers, will add to pressure on the Bank of England to consider upping interest rates to cool the economy.

The Bank’s rate-setting Monetary Policy Committee thinks the current inflation surge is ‘transitory’ and will fall back after peaking at 3 per cent by the end of the year.

But the Bank’s departing chief economist, Andy Haldane, warned last month that the risk of high inflation was ‘rising fast’ and could reach nearly 4 per cent this year.

A committee in the House of Lords has also called on the Bank to be clearer about its use of quantitative easing and assurances that rising inflation will only be temporary.

Jason Cozens, the founder and boss of Glint, said: ‘When will those in power admit that inflation is out of control?

‘UK inflation is spiralling upwards, already at a three year high with no signs of slowing.

‘The Bank of England has already accepted that three percent inflation is likely this year; it seems we may surpass that new target sooner rather than later.’