Should you be worried about cancer in your coffee?

A California judge ruled yesterday that coffee sellers will have to post warnings that coffee contains a carcinogenic chemical.

Coffee has been part of the human diet for centuries, but scientists have oscillated between warning against over-consumption and advising that a cup a day (or more) may have protective effects.

At the heart of the cancer debate is a chemical called acrylamide, which can be found in a number of foods and drinks, including both coffee and french fries.

Daily Mail Online spoke to an expert who broke down how coffee can help and hurt your health, and why you will likely never drink enough to give you cancer.

California stores must now warn that coffee contains a carcinogen, but research shows a weak link between the two and suggests that coffee has more benefits than risks for health

Coffee is a hot commodity with controversial benefits and risks

Around the world, people drink an estimated 2.25 billion cups of coffee every day, a daily ritual that makes coffee the second most valuable trading commodity in the world.

The beans are really seeds, found at the heart of the red berries of coffee shrubs.

The fruit itself is rarely eaten now and, while the beans have only very small quantities of nutrients, some research has linked its contents to better heart, bowel and liver.

On the other hand, the very thing that makes us love coffee so much – the natural stimulant, caffeine – can be overwhelming to the body, causing anxiety and disrupting our sleep patterns.

But beyond this, for every part of the body that one study says coffee is beneficial for, another says the drink is harmful.

Though raw coffee beans themselves are safe, some studies have hinted that roasting them to reach the bold, rich flavors we enjoy in our morning cups may come at a cost.

A chemical called acrylamide can form as a byproduct of cooking foods at high temperatures.

The same chemical is used to make plastics, but, in the case of coffee, it is formed when many carbohydrates are cooked.

In 2002, Swedish scientists discovered that a number of baked, roasted and fried foods contained acrylamide, which is a genotoxin, meaning that it corrupts DNA.

In experiments, rats whose mouths were exposed to the chemical were significantly to develop cancers of various parts and systems of their bodies.

These tumors of their mammary glands, central nervous systems, thyroids, uteruses and scrotums, though the same has not been observed in humans.

You cannot drink enough coffee to give you cancer

Based on the studies in rats, the Environmental Protection Agency calculated that the risk of developing a cancer due to acrylamide exposure would be increased if you drank 4.5 mg of the chemical per every 2.2 lbs you weigh every day.

In other words, someone who weighs 150 lbs would have to ingest 307 mg of acrylamide in order for it to increase their cancer risks.

For comparison, 307 mg is less than one tenth of a teaspoon. That isn’t much, but it is much more than scientists found in even the most acrylamide-laced coffee product samples.

In 2013, researchers found that a single cup contained 0.45 micrograms of acrylamide. That is one one-hundredth as much as the EPA says would make you ‘no more than a one-in-a-million increased chance of developing cancer as a direct result’ of acrylamide.

The World Health Organization took coffee off its list of possible carcinogens in 2016, but the presence of a carcinogen at all seems to be sufficient for California to warn against the beverage.

‘There is really not strong evidence that coffee does cause cancer,’ says Dr Kathryn Wilson, who served on the committee of the World Health Organization that decided to downgrade coffee to an unlikely carcinogen.

Dr Wilson has studied the links between cancer and acrylamide itself as well as between coffee and cancer. Her research has found more evidence of positive links than negative ones.

‘There is actually pretty strong evidence that coffee is associate with lower risks of endometrial and liver cancers,’ she says.

Even in the top percentile of acrylamide-consumers that she has examined, there were weak associations of heightened risks for ovarian and endometrial cancer.

Perhaps more importantly, coffee is hardly the only source of our acrylamide exposure, and acrylamide is not the only compound in coffee.

‘Just reducing it to its acrylamide content is not the bet approach for understanding coffee in the diet,’ she explains.

There is really not strong evidence that coffee does cause cancer

In fact, she has added research to a substantial stack of evidence that coffee can have protective effects against cancers, especially those of the liver.

The liver not only helps to break down whatever we ingest, but skims out the toxic elements.

But with time, it can become over-loaded by the damaging compounds, leading to scarring that weighs it down and impedes the organ’s functioning.

One of the processes that can accelerate the development of this scarring – called cirrhosis – is oxidation.

Oxidative stress is an inevitable after-effect of our cellular activity. Processes like the way that we metabolize food produce imbalanced oxygen atoms, called free radicals, which can upset the balance of other cells.

Coffee also ‘seems to have a really positive effect on how the body handles insulin,’ and has been linked to reduced risks for type 2 diabetes, according to Dr Wilson. 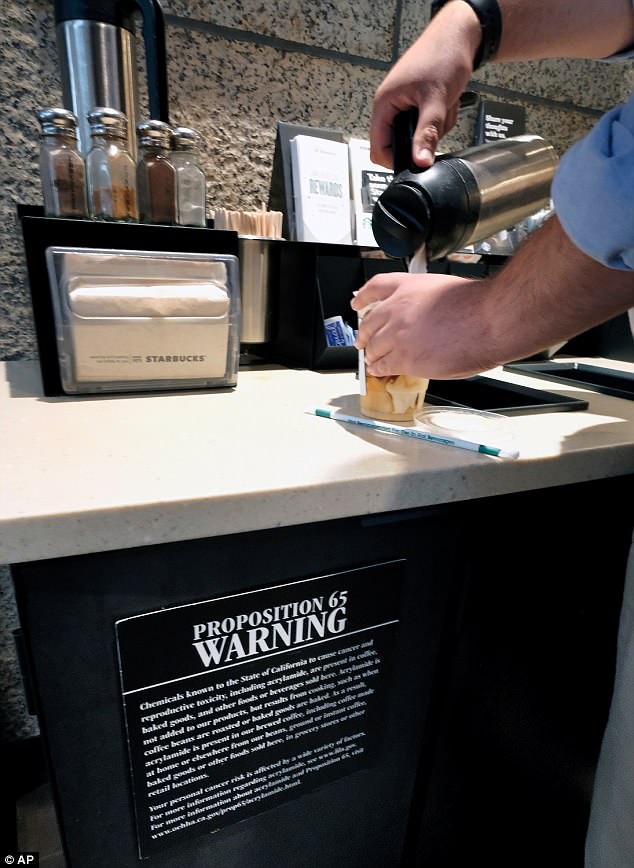 ‘I can’t pretend to understand California’: The ruling might be making a red herring for health out of black gold

The existence of both benefits like these as well as risks for exposure to acrylamide in coffee are evidence that California’s ruling is part of ‘an older approach to nutrition that tries to break things down into all of their little parts,’ says Dr Wilson.

California’s decision, on the other hand, falls under Proposition 65, which ‘is designed to look at possible chemical and environmental carcinogens,’ says Dr Wilson.

‘I can’t pretend to understand California… but for foods that are so much more complex than manufactured products, [Proposition 65] just really doesn’t apply very well,’ Dr Wilson says.

According to her research, even if you quit drinking coffee, the change to your acrylamide levels would be minimal.

‘Acrylamide is pretty widespread in foods, so getting rid of it from any one food would not change your concentration of it much,’ says Dr Wilson.

In general, ‘cooking carcinogens are a thing we are exposed to and if we wanted to remove them we would have to always eat raw, boiled or microwaved foods,’ she adds.

It isn’t that trying to reduce the carcinogens in our lives is a bad idea, but ‘from a public health perspective, this really distracts from things we know cause cancer that people have control over in their lives, like smoking, obesity and lack of physical activity,’ worries Dr Wilson.

‘I think if people are worried about cancer and go down this line of thinking that we need to not cook foods and stay away from coffee, it really is not going to have any effects, whereas we know that about one-third of all cancers are attributable to tobacco,’ she says.