Should you go Hollywood blonde? Celeb colourist weighs in on trend

There’s only one colour you should be asking your hairdresser for this season, according to the fashion crowd: a glossy Hollywood blonde.

Dubbed ‘blondeshell’ by Vogue magazine, the sunshine shade is as far from the past few season’s muted, mousy colours as possible.

According to the fashion bible: ‘The bottle-blonde movement is seizing showgoers. Against a head of white-hot hair, suddenly everything looks a bit cooler.’

But as every women knows, it’s also the trickiest shade to pull off. Pick the wrong tone, and it can look cheap, brassy or yellowed.

Kate Winslet recently gushed: ‘There’s so much to be said of her skill and artistic brilliance, but the friendship and the fun times we have shared count for much more.’

So what are Nicola Clarke’s secrets? How do you turn women of all ages and hair colours — from greying to redheads — into blonde bombshells?

Here, Nicola and her top team of hair stylists at new salon Nicola Clarke at John Frieda turn five very different women into beautiful blondes — and reveal how anyone can carry off this most desirable hair colour.

I’ve been told it takes ten years off me 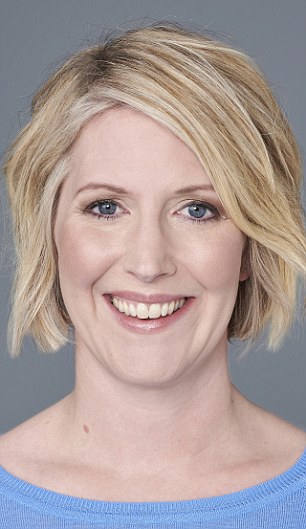 Sara Nash, 41, (pictured before and after) said people tell her she looks ten years younger since Nicola worked her magic

Sara Nash, 41, works at a primary school in Reading. She lives with her husband Myles, 41, head of boarding at an independent school, and their two children. She says:

My HAIR is naturally mousy and slightly frizzy, and I’ve always spent lots on it.

Once, I invested £300 in a Brazilian blow-dry — a semi-permanent treatment that leaves your hair straight for up to four months — as well as having highlights every eight weeks or so, sometimes paying more than £100.

As I head into my 40s and notice my grey roots, however, I know I need a change.

I also remember past hair disasters all too clearly. Once, I tried to go dark, only for my hair colour to end up an unflattering reddish brown.

NICOLA SAYS: Sara has a lovely, typical Northern European creamy complexion, which can carry off a far brighter blonde than she has.

Her boring brown and washed-out bleach highlights — so often a default look for too many women — were unflattering and drained her perfect skin.

I worked around Sara’s hairline to remove the grey and make it blonder, taking out the darker stripes of hair to soften and brighten the colour. Then I used the Balayage technique at the ends, where the hair is painted with a brush. It’s very effective at creating movement.

SARA SAYS: Happily, I love my new blonde — I’ve been told it takes ten years off me!

Emily Harrison, 26, is a mortgage co-ordinator. She lives with her partner Scott, 27, and their six-month-old daughter, Lily. Emily says:

My hair has always been naturally dark, but about four years ago I went for a red tint, around the time I met Scott.

When I was pregnant, I was so ill with morning sickness that I was bedbound for months, and had my hair cut to shoulder length because I didn’t have the energy to look after it. 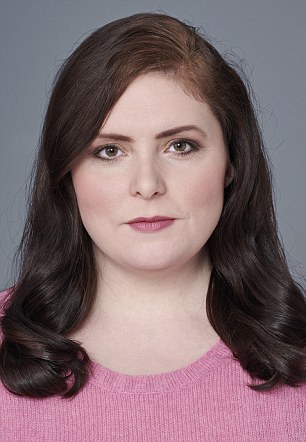 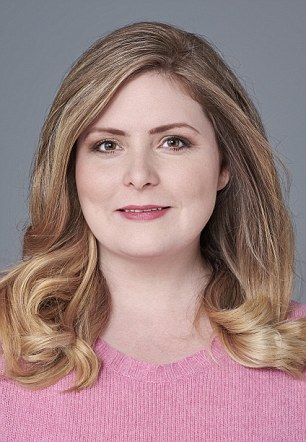 Emily Harrison, 26, pictured before (left) and after said her new look makes her feel so much more confident. She revealed her friends doubted the decision but she’s proved them wrong

Now, though, I’m ready for a makeover. Scott liked the idea of me going blonde, thankfully — but I’m worried that I might look brassy or silly.

NICOLA SAYS: It’s possible to turn a brunette into a natural-looking blonde, but we never quite know what the end colour will be. It also takes a great deal of time — around five hours.

We first removed any build- up of past tints with a gentle colour remover, then put in highlights with foils, as well as the freehand Balayage technique. Very dark brunettes may be better off with highlights around the mid-lengths to the ends of the hair, rather than around the face as a direct contrast to skin — as here. On Emily, it works beautifully as we kept subtle brown tones in her highlights — if you’re a brunette, make certain your stylist doesn’t go for one block colour.

EMILY SAYS: My new look makes me feel younger and so much more confident. I wish I’d had it done sooner! Everyone said they couldn’t imagine me with blonde hair and it wouldn’t suit me. Now they’re pleasantly surprised.

Lisa Coleman, 53, is married to Darren, 46. They have four children and live in the West Midlands. She says:

This fabulous hair is part of an ongoing transformation. Four years ago, I ate for comfort and weighed over 30st.

Lisa Coleman, 53, revealed she feels much more comfortable in her own skin since her transformation. She said she’s proof blonde can work on anyone

In old pictures my hair is a terrible mousy brown. I cut and dyed it myself because I was scared of breaking chairs in the hairdressers. Today, I’ve only got another 14lb to lose and felt a revamp could give me a final boost.

NICOLA SAYS: Grey hair is hard to cover up. Lisa’s hair was stunning already and her olive skin and darker eyes mean she can carry off a strong look. She kept referring to Meryl Streep in The Devil Wears Prada, who had a strong silvery blonde. That’s what we went for. The colour I’ve created is platinum rather than yellow. I lifted out lots of the darker grey, using bleach to freshen her look.

LISA SAYS: A wonderful experience, leaving me comfortable in my own skin. I’m proof any woman can go blonde.

My brassy hair’s been rescued

Kia Morris, 36, is a freelance social media manager. Married to Darren, 36, who runs renovation projects, they have two children and live in London. She says:

Leaving a hairdresser with hair you hate is depressing, but that’s my reality every two or three months when I steel myself to get my roots done. I’m never happy with the final result. In addition, I’ve had so much blonde applied to my naturally brunette locks over the years that I’ve got a lot of broken hair.

NICOLA SAYS: Kia’s hair is classic mousy brown, and very over-bleached. Brassiness often occurs on mousy hair with highlights. Kia just needed a change in the placement and brightness of her blonde.

I put two foils of blonder colour around her hairline to brighten her skin. Then a little Balayage to brighten the ends. I left the colour at the back, giving her damaged hair a chance to recover. Because it will grow out imperceptibly, she needn’t get her roots done too frequently.

KIA SAYS: I am astonished — and relieved — to discover I love the final look. It’s as blonde as I could hope for, and I can see the condition is going to improve. My husband loves it, too.

Kerry Clayton, 28, is married to David, 29, an accountant. They have two children, Flynn, two, and Lyla, one. She says:

The first thing Flynn said was: ‘Mummy! Cool hair!’ My hair history is one of at-home dye disasters. Aged 12, I dyed my naturally auburn hair red with an awful DIY hair dye.

Over the years, it went black, blue, purple and green. The last three were errors. I had dyed blonde hair, but accidentally put on blue hair dye instead of toner. I tried to remove it with bleach, but it went purple. I then tried to cover it with brown hair dye and it went green!

NICOLA SAYS: A red base like this, which is down to a box dye, always gives a warmer blonde result. But it’s a long process!

First, I used colour remover to take out some of the old dye, repeating four times before applying bleach. The result is a wonderful strawberry blonde.

Nicola’s six tips to get it right…

There is a blonde for everyone, but your idea and mine could be very different. I welcome women bringing in pictures of actresses or models. A shot of Kate Moss or Gwyneth Paltrow tells me exactly the shade you’re hoping for and I can discuss how it might work.

Choosing your perfect blonde is more about skin tone than anything else. To work out whether your skin is warm or cool toned, look at the veins on your wrist.

ADJUST AS YOU AGE

Even if you’ve always been blonde, in your 40s and 50s, your colour will need rethinking. Skin tone often fades as it ages and hair texture can become more prone to breaking, so be careful about applying too much bleach.

The shade may need toning down, and some contrast added, with lighter hair round the face.

BEGIN with a few highlights, lighter streaks around the face and a shimmer of colour. Build up from there. You can always add more, it’s harder to take it away.

YOUR colour will only ever be as good as your hair condition. Color Wow Shampoo (from £16.50, colorwowhair.com/uk), helps seal colour and gives great shine. The Root Cover Up (£28.50, colorwowhair.com/uk) can extend time between salon visits. Try Philip Kingsley Elasticizer (£31, lookfantastic.com) for smoothing hair and increasing strength and shine. New range Iles Formula is great for hair repair (Iles Formula Discovery Pack, £23.50, harveynichols.com).

Colour with Nicola and her team starts from £60, johnfriedasalons.com