Should you have TWO flu jabs this winter? Injection ‘wears off faster than we think’

Earlier this year, Professor Stanley Plotkin, a pioneer of vaccines, revealed that he has two flu jabs. The 87-year-old, from the University of Pennsylvania, has one in early autumn, followed by another in December each year. The reason? The trusted flu jab, it seems, wears off far faster than we think.

British experts agree that Prof Plotkin, a key player in the development of some of today’s lifesaving immunisations, including rubella, may be on to something.

This winter, an estimated 26 million Britons will be offered a flu jab. The over-65s, young children, pregnant women and anyone with severe chronic illness such as asthma or heart failure are all eligible.

The annual vaccination campaign, which kicked off in late September, is one of the biggest public health initiatives on the calendar, designed to limit the burden of infectious disease outbreaks every winter. The protection given in a single shot will, according to Public Health England, last about six months.

But Professor John Oxford, a virologist and flu expert at Queen Mary University of London, says: ‘If Prof Plotkin is advocating two flu vaccines, the rest of us should take note and not simply ignore it.’

So are millions of Britons missing out by settling for a single jab?

This winter, an estimated 26 million Britons will be offered a flu jab (file photo)

PROTECTION DROPS BY HALF IN THREE MONTHS

The power of flu vaccines wanes almost as soon as they are administered. Last year, researchers from the health body Kaiser Permanente Northern California found that just three months into the winter season, those given the jab were almost 50 per cent more likely to catch the bug than when they first had the vaccine.

Like many vaccines, the flu jab contains inactivated versions of the virus. When introduced into the body, they help the immune system ‘learn’ to fight infection.

The problem is, out in the real world, live flu viruses mutate quickly. Often, the versions being passed around are slightly different from the vaccine versions. This is why the vaccine is effective in only about two-thirds of people.

Previous studies in 2012 estimated that the effectiveness of the jab reduced by almost a tenth every 30 days after the dose was given. The researchers, from the University of Colorado, concluded that a secondary ‘booster’ shot in mid-winter would significantly enhance the vaccine’s effect.

Prof Oxford agrees: ‘Giving a booster jab would almost certainly give patients extra protection. It’s unlikely to do any harm.’

However, he adds that a second dose would probably not be as effective as the first. ‘Booster jabs are a top-up and do not give the same level of protection,’ he says. 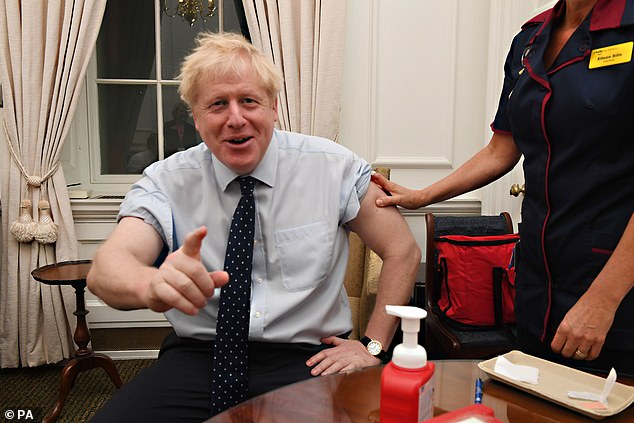 Prime Minister Boris Johnson reacts as has a flu jab in Downing Street, ahead of attending the State Opening of Parliament

WHY FLU CAN BE DEADLY IF YOU’RE AGED OVER 65

Flu, which is spread when infected people cough or sneeze, kills about 13,000 Britons a year. Most of the victims are over the age of 65, as the virus can lead to potentially fatal complications such as pneumonia. Flu can also worsen symptoms of heart failure, diabetes and asthma, with lethal consequences. 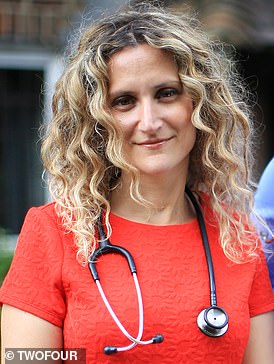 A third of people eligible for vaccination still don’t have one, says Dr Ellie Cannon

Flu vaccines are by no means perfect, but neither is any medical treatment. Doctors make recommendations based on the risks versus the benefits – and in the case of the flu jab, the benefits undoubtedly outweigh the minimal risks.

For vulnerable people – over-65s and those with chronic health conditions – they can be lifesaving. And this year, the reformulated vaccine is expected to protect more older adults than ever.

It’s a fact that a third of people eligible for vaccination still don’t have one. Even though the jab’s protection may not last as long as we would like, having a flu injection is far better than having nothing at all.

Older people are more at risk due to immunosenescence – a process of age-related decline which chips away at our immune systems as we get older.

Some experts think this decline starts as early as our 40s, when more obvious signs of ageing show, such as greying hair. By our mid-60s, flu vaccines are much less effective than in somebody 30 years younger.

Over-65s will receive extra protection this winter because of a new type of ‘turbo-jab’. Launched this year, it is a new vaccine which protects against three or four strains of flu and also features a special ingredient, called an adjuvant. This bolsters the immune system’s response so that it releases a greater number of infection-fighting antibodies.

‘They increase the duration of effectiveness but the exact length of time is unclear,’ says Professor Peter Openshaw, an immunologist and professor of experimental medicine at Imperial College London. ‘They can also increase the risk of immediate side effects in some people, such as local pain and swelling at the injection site.’

With the adjuvant vaccine, about one in four patients suffers injection-site pain and 13 per cent get a headache.

BOOST THE JAB’s EFFECT – BY GOING FOR A JOG

There are also factors that may boost the effectiveness of the flu jab. A 2015 study by Brazilian scientists found that elderly men who undertook regular intensive exercise, such as jogging or cycling, produced significantly higher levels of flu-fighting cells when they were vaccinated than men who did little or no exercise.

And if side effects are a concern, a 15-minute workout before the flu jab can make them much less likely.

Sydney University researchers studied 78 patients and found those who walked on the spot before being given the vaccine were much less likely to suffer pain or fever or lose appetite after the jab.

Ultimately, whether you choose one or two is entirely up to you. Prof Plotkin says: ‘My decision to take up two vaccines is a personal one. There could be a downside but I haven’t seen one yet.’

However, a second jab isn’t available on the NHS, and Prof Oxford says: ‘A third of patients don’t turn up for their first one.’