Should you ignore the food traffic lights?

You see them on food packets — red, amber and green colours that are supposed to depict whether the food you are putting in your basket is healthy — or not.

Introduced in 2013 by the Food Standards Agency, the traffic light colours are assigned for levels of fat, saturated fat, sugar and salt.

The NHS website says that if there are a lot of greens on the labels, then ‘you know straight away that it’s a healthier choice’.

‘You can eat foods with all or mostly amber on the label most of the time’, while red on the label means you should ‘try to eat them less often and in small amounts’.

Traffic light nutritional information is provided per average serving size and per 100g for food, or 100ml for drinks — and simplified into a percentage.

Introduced in 2013 by the Food Standards Agency, the traffic light colours are assigned for levels of fat, saturated fat, sugar and salt

However, the Department of Health and Social Care and the Food Standards Agency are consulting with manufacturers and the public to see if some other scheme is better, partly because the labelling hasn’t translated into long-term health benefits.

Data from the Health Survey for England shows that since the scheme was introduced, obesity levels have risen (62 per cent of adults were overweight or obese in 2013, compared to 64 per cent in 2019), the incidence of high blood pressure has stayed constant, and the proportion of people with raised cholesterol has fallen (from 48 per cent to 43 per cent) — overall, not exactly a ringing endorsement.

‘One criticism is that it only focuses on the negative nutrients,’ says dietitian Helen Bond.

‘For example, some dairy foods might have red for saturated fat, but this overlooks the good amounts of calcium and protein they contain.

‘And some products high in fruit sugar may show red while actually being a good source of nutrients such as vitamin C and fibre.’

Here, with help from Helen Bond, Good Health reveals some of the cases where the traffic light system gets it wrong…

Traffic light explanation: Peanuts are high in fats and push this peanut butter into the red zone. Added salt and sugar also turns these nutrients amber for peanut butter. Meanwhile, the jam has a spread of green for fats and salt, but red for sugar.

Expert verdict: The reds and ambers shouldn’t put you off having peanut butter on your toast — the combination of heart-healthy unsaturated fats, protein and fibre in the spread make it a more filling and nutritious option than jam.

Just one tablespoon of peanut butter has 1.1g fibre (the same as in a small apple) and 3.8g protein (about the same as in half a boiled egg), while jam has negligible amounts of both. You also get just a quarter teaspoon of sugar and less than 2 per cent of your daily salt limit per tablespoon serving.

By comparison, a tablespoon of the strawberry jam has more than a quarter of your daily sugar maximum.

It also has little nutritive value to speak of, as the strawberries go through a large amount of heat processing, affecting levels of vitamin C and antioxidants you’d usually get in the fruit.

And as there’s almost no protein or fibre in jam, you could feel hungrier sooner. Choosing peanut butter over jam does give you more calories though — a golf ball-size serving (a couple of tablespoons) should be your limit.

Traffic light explanation: The 20 per cent nuts, seeds and coconut flakes means the muesli gets amber traffic lights for both fat and saturated fat, yet Frosties is green for both. Sugar contents are red in both cases, while Frosties also has added salt, so score worse for this nutrient.

Expert verdict: Nutritious nuts and seeds affect the traffic light system here — despite being amber for fat and saturated fat, the majority of the fat in the muesli is healthier monounsaturated fats and polyunsaturated fats that help keep ‘bad’ LDL cholesterol in check. The nuts and seeds also supply vitamins and minerals, including magnesium and iron for good energy levels and vitamin E which helps protect cells from damage.

While both cereals have around three teaspoons of sugar per bowl, the dried fruit sugars in the muesli don’t count as the more damaging ‘free’ kind (while the added sugar in the Frosties does).

The higher fibre level in the muesli helps slow sugar release into the bloodstream.

Traffic light explanation: The yoghurt has significant amounts of naturally occurring sugars and fats, triggering the same spectrum of red, amber and green for nutrients as the trifle.

Expert verdict: Foods with between 5.1 and 22.5 per cent sugar get an amber rating, and it doesn’t matter if the sugar is added or occurs naturally, as both count.

The one-and-a-half teaspoons of sugar in the yoghurt are naturally occurring from dairy, which don’t count as ‘free’ sugars and don’t harm teeth. But the trifle has four teaspoons, largely the unhealthier ‘free’ type added to sweeten the dessert.

Both products have similar amounts of saturated fat — more than a third of the daily limit per serving. But there’s evidence that saturated fat isn’t so harmful when it comes from dairy.

It’s thought other beneficial ingredients in dairy, including calcium, may mitigate the potential unhealthy effects.

Calcium keeps muscles, nerves and blood vessels functioning properly, which may be part of it, and there’s potassium in the dairy that’s key in blood pressure control. 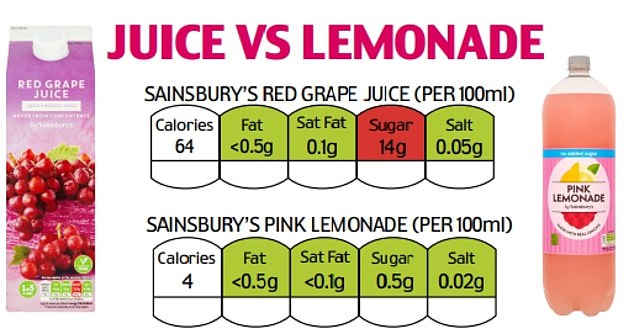 Sainsbury’s Pink Lemonade contains the low-calorie sweeteners sucralose and acesulfame K, and just 7 per cent juices, gaining green lights across the board.

Expert verdict: A 150ml glass of the grape juice contains two-thirds of your daily sugar limit — but it counts as one of your five-a-day, and red grapes are rich in resveratrol and other antioxidants, which protect cells from damage.

Though the lemonade is slimline and sugar-free (for green, drinks must contain 2.5g sugar per 100ml or less), it is acidic (which harms teeth), doesn’t have antioxidant benefits, nor does it count as a portion of fruit.

On balance, the juice has more nutritional value, but do stick to a 150ml serving size. 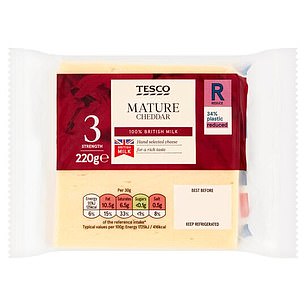 Cheddar cheese is indisputably high in fat and saturated fat, so scores red on these

Traffic light explanation: Cheddar cheese is indisputably high in fat and saturated fat, so scores red on these.

The lean ham, however, is low in these — meriting green lights.

The Cheddar gets a red for salt too, whereas the ham scores amber. 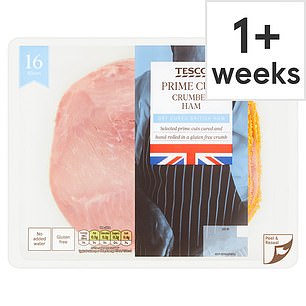 The lean ham, however, is low in these — meriting green lights. The Cheddar gets a red for salt too, whereas the ham scores amber

Expert verdict: You’d always make ham sandwiches not cheese ones if you based your health decisions on traffic lights on labels alone — but that would be a mistake, as cheese is a very good source of calcium, with more than a quarter of your daily needs in a 30g portion.

Cheese is also slightly higher in protein: 7.6g per 30g portion compared with 5.5g per 25g slice of ham.

The green nutrient labels on the ham also don’t reflect that it contains nitrites which, though necessary for stopping bacterial growth, may contribute to a colon cancer risk — the World Cancer Research Fund says we should eat little, if any, processed meats such as bacon and ham.

You can also consider ham a high-salt food — with 1.5 per cent, the limit for an amber light.

Between the two, opt for cheese but stick to a 30g matchbox-sized portion as your daily limit because of the saturated fat.

Traffic light explanation: Mackerel is naturally packed with fat and saturated fats, and gets red labels for these nutrients, whereas the lean back bacon scores only amber. Both contain salt added during processing, putting them in the red for this nutrient.

Expert verdict: Despite rating red for fat and saturated fat, mackerel is still the healthier choice over bacon, given that the fats it’s rich in include the omega-3 fats EPA and DHA, which are needed for brain, heart and eye health.

When you eat one fillet, you’ll get all your daily EPA and DHA needs for the whole week, for just over a quarter of a day’s saturated fat — a good trade-off.

The bacon may look healthier by glancing at the traffic light labels, but these don’t convey that bacon is a processed meat containing nitrites, preservatives that have been linked to colon cancer; nor does it offer any of the extra nutrients the fish does. 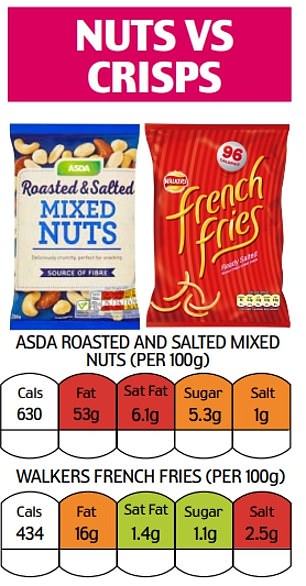 Traffic light explanation: Looking at the traffic lights, the nuts seem more unhealthy than the crisps — they are 53 per cent total fat (compared with 16 per cent in the crisps), triggering a red light; 6.1 per cent saturated fat, which is also in the red zone, and thanks to naturally occurring sugar, they’re worse for sugar, too. French Fries are only worse for salt, according to the traffic lights.

Expert verdict: A high ratio of unsaturated ‘good’ fats to saturated ‘bad’ fats means the total fat in the nuts actually have cholesterol-lowering benefits, which is not captured by the traffic light system.

Meanwhile the almonds, cashews, hazelnuts and peanuts here in these mixed nuts also provide lots more vitamins and minerals than the crisps — for example, a 40g serving supplies around 10 per cent of your daily iron, and 20 per cent of your daily magnesium, for nerve and muscle function, as well as a generous dose of antioxidant vitamin E.

They are also higher in salt, with 8 per cent of your daily limit per pack compared with 7 per cent for the nuts.

The crisps also count as an ultra-processed food and high intake of these is associated with obesity, type 2 diabetes and heart disease.

However, portion-controlling the nuts is still important — I’d recommend a 30g handful daily.