Should you now throw ALL your savings into NS&I Premium Bonds?

National Savings & Investments is finally increasing the number of Premium Bond prizes it pays out every month, boosting its 21million savers’ chances of winning. From next month, NS&I will pay out an additional 1.4million prizes, cutting the monthly odds against winning for every £1 in Premium Bonds from 34,500 to one to 24,500 to one.

At a time when most high street banks are still paying a measly 0.1 per cent – and some just 0.01 per cent – on easy-access savings accounts, many savers will ask whether they are better off taking their chances on Premium Bonds instead. After all, on the face of it, the stated Premium Bond payout rate of 1.4 per cent sounds competitive.

We take a look at the pros and cons of Premium Bonds right now.

Boost: From next month, NS&I will pay out an additional 1.4million prizes

What prize will change most dramatically?

Why is this happening now?

Interest rates on the best savings accounts have been edging up thanks to four increases to the Bank of England base rate since December last year.

NS&I has not budged on Premium Bond rates since it cut them to the equivalent of 1 per cent in December 2020. But it has been under increasing pressure to do so to reflect the base rate rises.

NS&I likes to keep its rates roughly in the middle of the pack. It doesn’t want to be accused of offering the stingiest rates, but also doesn’t want to pay so much that it claws business away from other, commercial players.

As well as respecting the interests of banks, it has a stated aim of doing the right thing by Premium Bond holders and the taxpayer, as NS&I is Government-backed. That requires a Goldilocks approach to rates – not too high, not too low.

Now that other savings providers are starting to raise rates, NS&I has space to do the same.

The payout rate, at 1.4 per cent, sounds competitive. However, this does not mean that all holders will receive a 1.4 per cent annual return. Most will receive nothing in any one month: that is the pay-off for having big prizes. For every one person who wins big, tens of thousands more win nothing.

Of course, the flip side to this is that a few lucky people do win one of the big prizes. Some people may be ready to relinquish a guaranteed interest payment from a savings provider in favour of even a very small chance of winning big.

However, now the interest available on the best savings accounts is creeping up, Premium Bonds are looking like more of a gamble.

The best easy-access savings account – offered by Chase Bank – now pays as much as 1.5 per cent. If you had £50,000 in savings – which is the maximum you can put into Premium Bonds – that’s a not insubstantial £750 a year of interest.

With inflation at nine per cent, no savings account comes close to protecting the value of cash. So it’s perhaps even more vital to glean whatever protection is available, rather than resign yourself to none at all, in hope of a big prize.

As Sarah Coles, a personal finance analyst at broker Hargreaves Lansdown, points out: ‘Even after the changes, there will still only be two million-pound prizes, so the odds of winning a million haven’t improved – in fact as more people buy more bonds, unless the number of million-pound prizes increases, the odds will get worse.’ 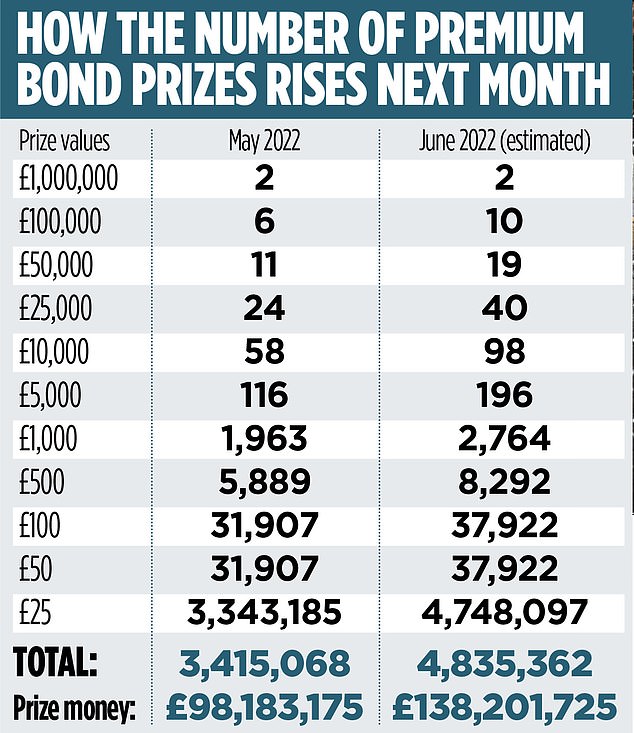 Is their tax-free status worth using?

It is true there is no tax to pay on any Premium Bond winnings. But most people don’t pay tax on their savings interest anyway.

First, everyone has a £20,000 tax-free Individual Savings Account (Isa) allowance to use every year.

Second, savers also have a personal savings allowance, which means that all basic-rate taxpayers can earn up to £1,000 interest a year without paying any tax.

With savings rates so low, you would have to have a very large balance to reach anywhere near this limit.

Laura Suter, head of personal finance at wealth manager AJ Bell, says: ‘Anyone who is in the highest-rate tax bracket gets no savings allowance, and so will pay 45 per cent tax on any of their savings income, which means the Premium Bond tax-free nature becomes far more attractive. That’s also true for higher-rate taxpayers who have a lot of money sitting in cash, as they will breach their allowance and pay 40 per cent tax on their savings income.’

However, if you are a high earner with a large amount held in cash, you may want to consider investing anyway.

And what about full Treasury protection?

All NS&I deposits are backed by the Treasury, which means that as long as the Government is solvent, your savings are safe.

However, the maximum Premium Bonds holdings you can have is £50,000, and balances on savings accounts with most providers are covered by the Financial Services Compensation Scheme, which protects the first £85,000 of savings per provider.

Are there any other major perks?

Premium Bonds are an easy way of saving for children as they can be bought for under-16s and looked after by their parent or guardian.

Anyone can buy Premium Bonds for a child, so friends and family members are able to buy them as a gift. The minimum amount that you can buy is £25.

Have they sorted out customer service?

In late 2020, NS&I had a customer service meltdown. As The Mail on Sunday reported at the time, customers were facing delays lasting weeks to withdraw cash, and routinely waiting as long as an hour to get through on the phone to call centre staff.

The problems arose when NS&I took in a record £14.5billion of deposits in three months alone from income-starved savers. NS&I was offering one of the best rates at the time, so its popularity soared.

However, NS&I is confident the problems are now resolved. Volumes are unlikely to hit the levels seen in 2020 as the increase in Premium Bond prizes is not as attractive as the top-rate deals back then, so NS&I has a better chance of coping this time round.