Shoulders hunched and keeping distance: Why Scott Morrison was awkward at G7 summit in France

Scott Morrison was ridiculed for awkwardly attending to his mobile phone while other global leaders laughed and joked before a photo at the G7 summit in France on Sunday.

An expert has told Daily Mail Australia there were key signs that showed Mr Morrison was feeling out of place – including hunching his shoulders, cutting himself off and retreating into his phone.

A body language expert has told Daily Mail Australia the key signs that showed Mr Morrison was feeling out of place – including hunching his shoulders, cutting himself off and retreating into his phone

‘Scott Morrison’s shoulders are hunched and his head is down at the moment on he attends to his phone,’ body language expert Holly Bartter said.

‘He looks as though he’s retreating and definitely not displaying confidence to the other guests’.

Ms Bartter said this created a space around Mr Morrison because he was not engaging with other leaders.

‘We can see the impact that engaging with his phone instead of the people around him has – there’s space surrounding Scott Morrison because he’s cutting himself off from connecting with others socially, and equally they are keeping a distance as it’s often awkward to disturb someone on their phone,’ she said.

Explaining why the Prime Minister was unwilling to engage with others, she said he was probably feeling awkward at such a high-profile gathering of some of the most powerful people in the world. 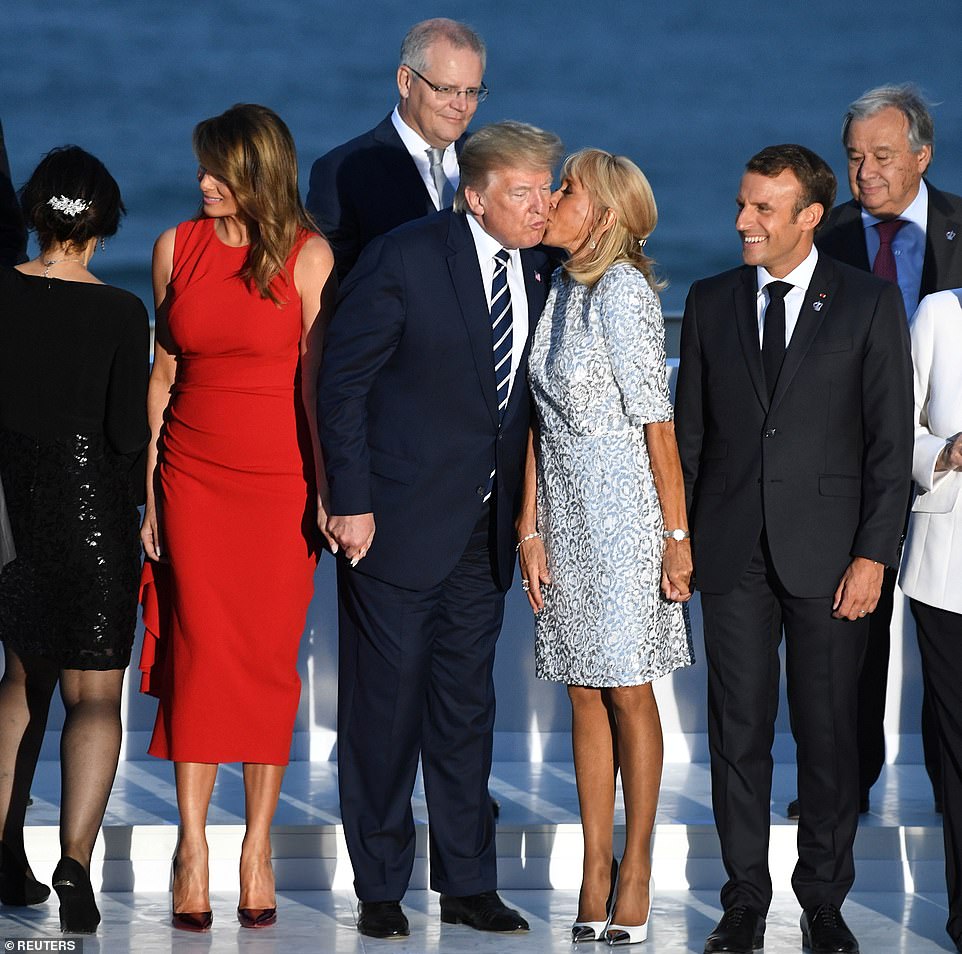 Australia’s prime minister wasn’t getting much love at the as US President Donald Trump received a warm greeting from Brigitte Macron, wife of French President Emmanuel Macron 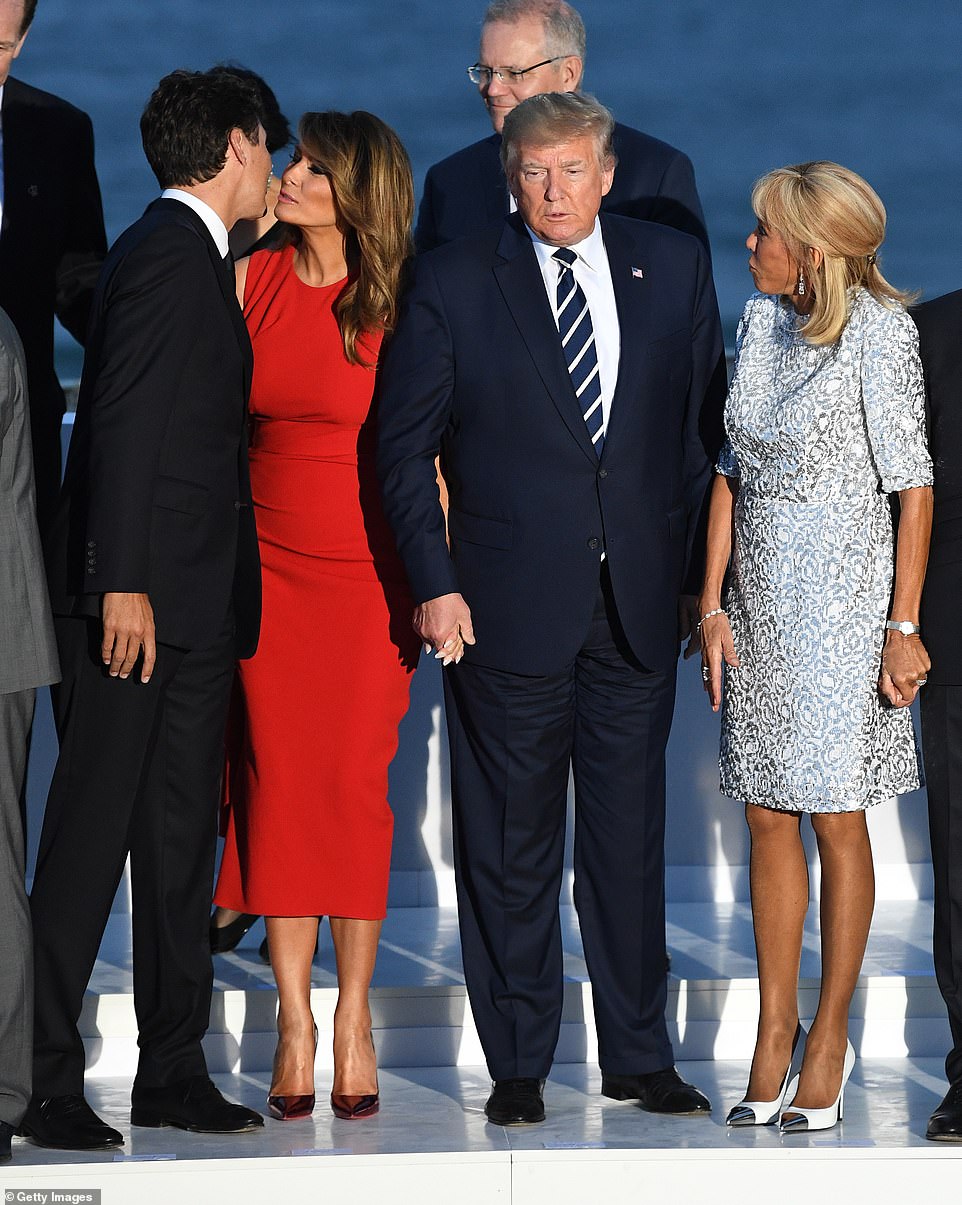 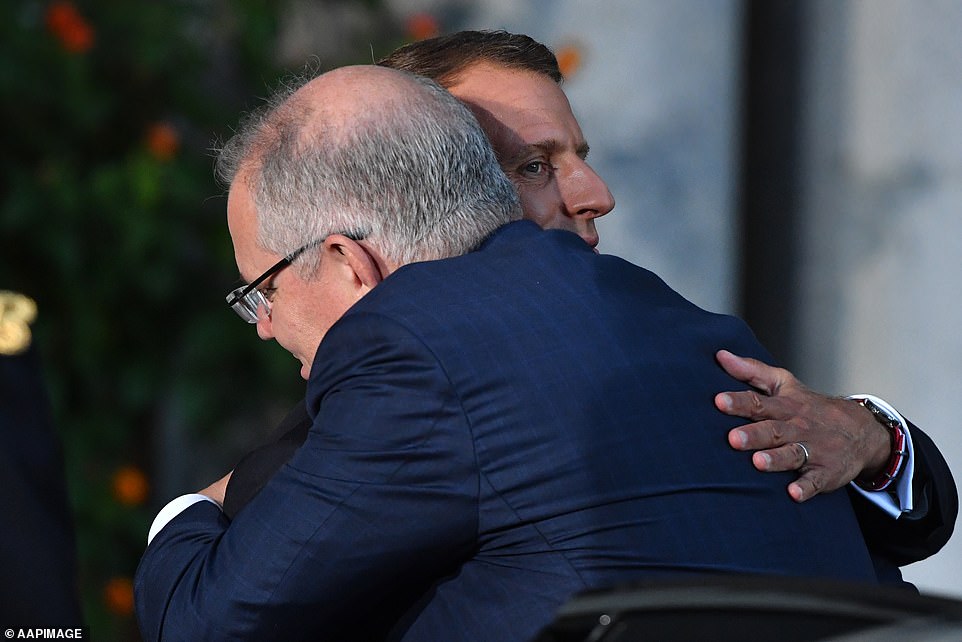 Mr Morrison finally got some love at the G7 Summit on Sunday when he shared a warm embrace with French President Emmanuel Macron, who had invited the Prime Minister along to the summit 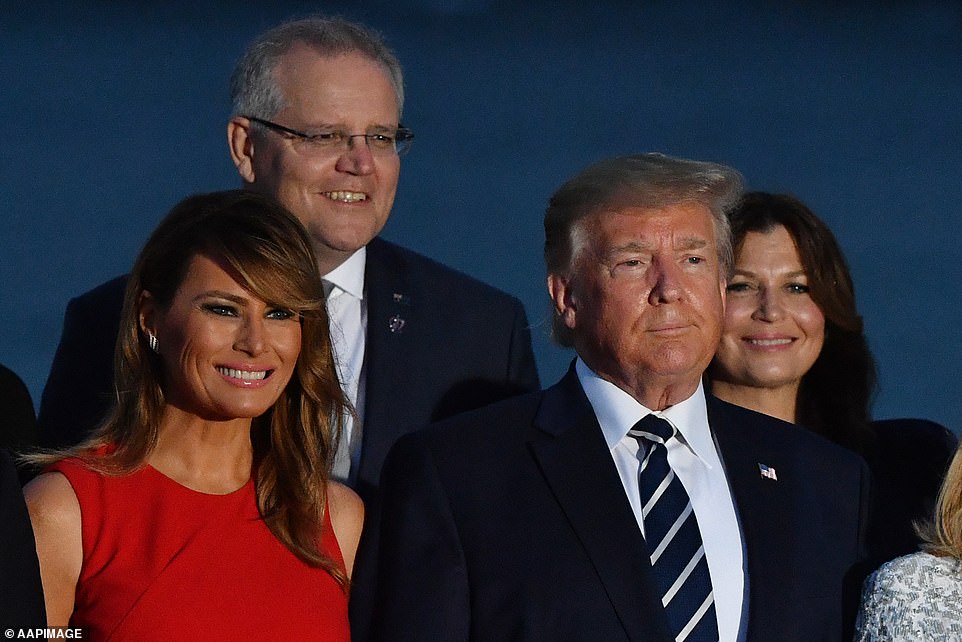 ‘It’s clear that in any social setting, if someone is somewhat isolating themselves and checking their phone frequently, they aren’t comfortable in the space and are looking to direct their focus elsewhere and more familiar,’ she said.

‘Our phone makes us feel instantly reconnected to our own world’.

Ms Bartter also compared Mr Morrison’s body language to the other leaders, who seemed relaxed and happy to be in each other’s company.

‘In comparison to Trump and Johnson, he glaringly stands out from the crowd,’ she said.

‘They are engaging with eye contact and using hand gestures to elaborate their points, right in the middle of the crowd and pulling attention.

‘It’s a clear sign of confidence and being “in the moment” without distractions – they are fully committed to their conversations.

‘For Trump greeting other guests with a kiss also shows he feels right at home in this social setting with cameras around.’ 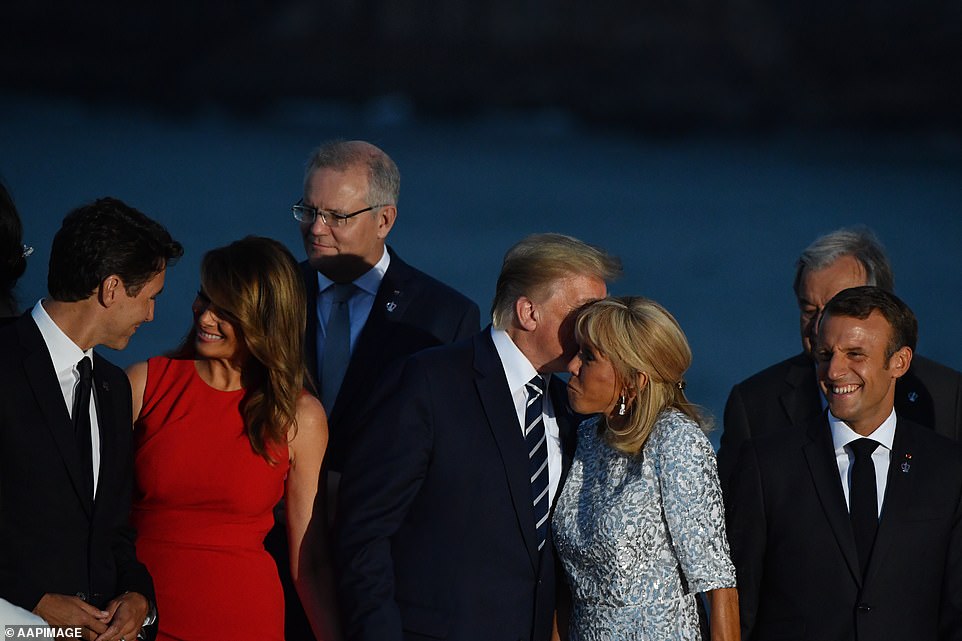 US First Lady Melania Trump was getting on with Canadian prime minister Justin Trudeau like a house on fire at the summit as did her husband Donald with Mr Macron’s wife Brigette. In the meantime, Scott Morrison watches on in the background 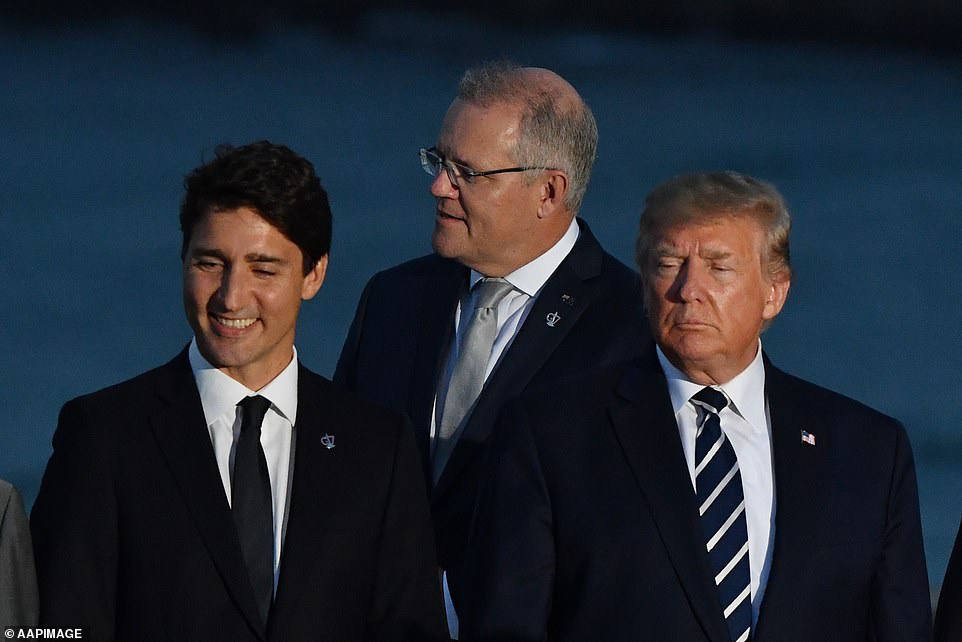 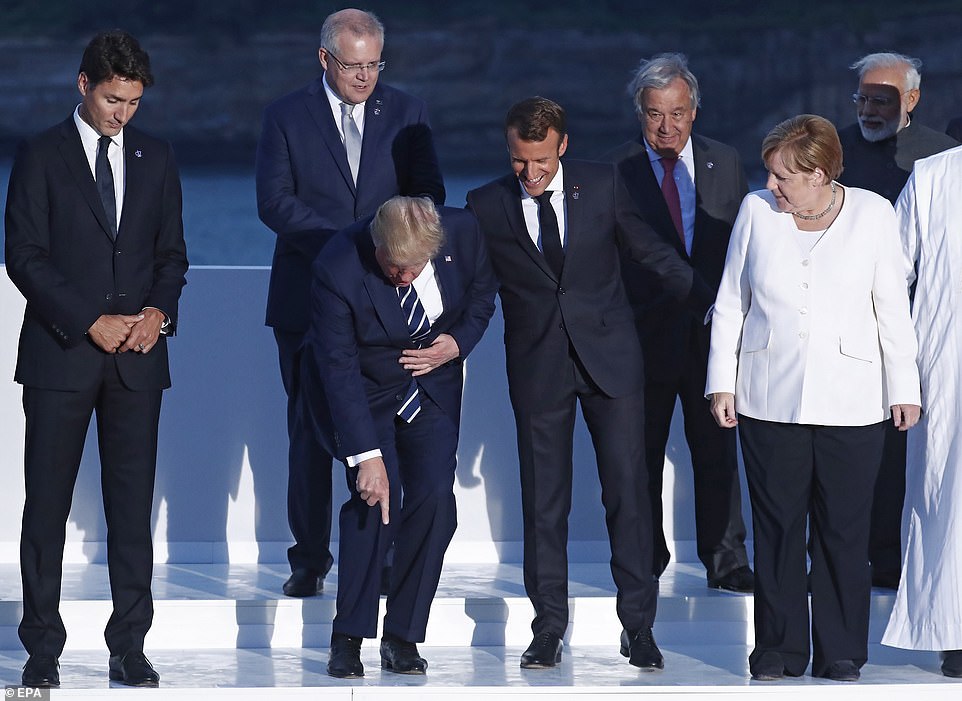 Mr Morrison, by contrast, was far less friendly with other leaders, something that the Australian public were quick to notice.

‘Wonder what the Australian Prime Minister Scott Morrison is thinking in the background there,’ one eagle-eyed viewer tweeted.

Another added: ‘Scott Morrison as usual the “Have a Go-between”.’

Others joked that he was simply watching cricket highlights after Australia lost the third Ashes Test to a remarkable innings from England batsman Ben Stokes.

One official photo captured the US First Lady Melania Trump warmly greeting Mr Trudeau with a kiss on the cheek as Mr Morrison sheepishly looked on from behind.

‘She isn’t looking at Scott Morrison this way,’ one person tweeted.

Another added: ‘Is Australian PM Scott Morrison in line behind her for a kiss also. Is kissing a custom at meetings of world leaders?’

Other photos showed Trump chatting with and kissing Mr Macron’s wife Brigitte as Mr Morrison looked on in the background.

Mr Morrison finally got some love when he shared a warm hug with Mr Macron. 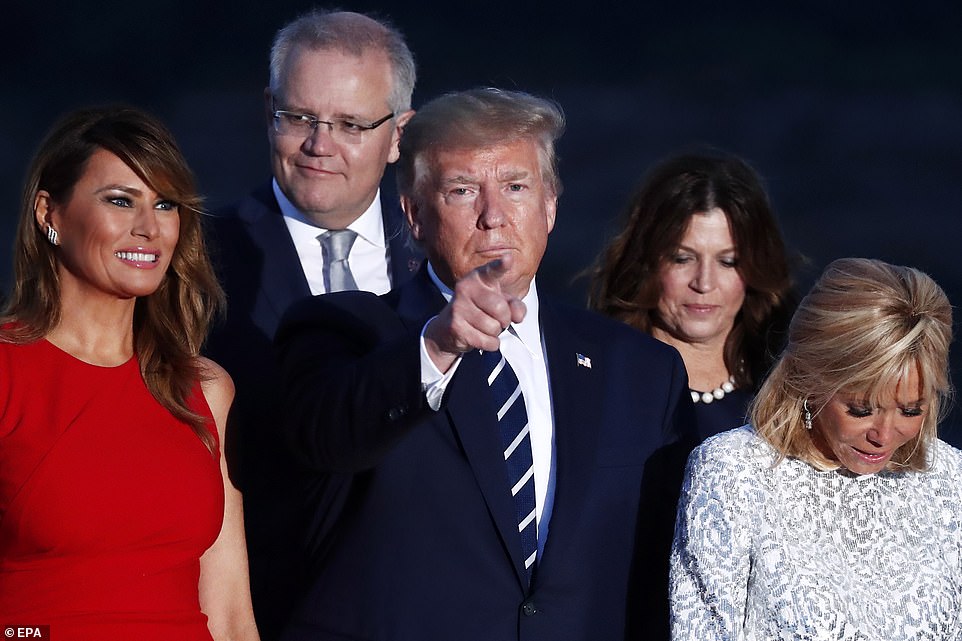 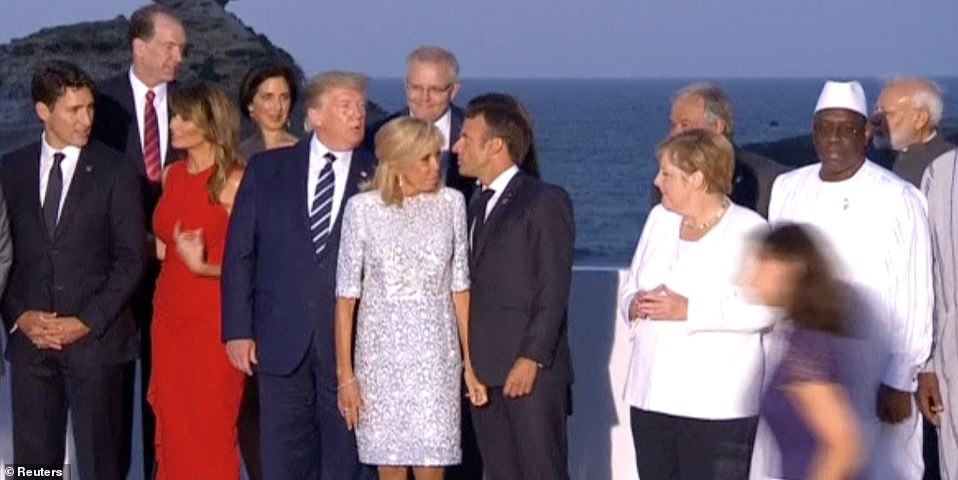 As other world leaders and their spouses mingled with each other, Australian prime minister Scott Morrison was left to watch on awkwardly in the background

WHAT IS THE G7 SUMMIT AND WHO WAS INVITED?

The G7 is an international intergovernmental economic organisation consisting of the seven largest economies in the world: Canada, France, Germany, Italy, Japan, the United Kingdom, and the United States.

While he doesn’t have an official seat at the G7 table, Australian Prime Minister Scott Morrison is attending the three-day summit as a keen observer.

Indian, Chilean and South African leaders also got a special invitation from French President Emmanuel Macron to attend the summit in Biarritz, a seaside town on the Basque coast in France’s south-west.

The 2019 talks encompassed a wide agenda, including the global economy, the escalating US-China trade dispute, climate change and the Amazon wildfires, taxes on tech giants, the planned US-UK-Australia operation in the Straits of Hormuz, and the ongoing unrest in Hong Kong.