A supermarket has asked its customers to refrain from sporting pyjamas, dressing gowns and nightwear when visiting its shop.

Tuffins Supermarket in Craven Arms, Shropshire, stuck a sign on its doors stating that no form of nightwear would be acceptable by those entering the store.

It says: ‘Customer notice – No dressing gowns / pyjamas / nightwear to be worn around this shop. You will be asked to leave.’

Tuffins in Craven Arms, Shropshire, stuck a sign on its doors stating that no form of nightwear would be acceptable by those entering the store

The sign has caused much amusement among local residents, with more than 400 people commenting on it on Facebook after a picture was posted online.

Some people have said they have regularly seen customers entering the family-owned supermarket wearing pyjamas tucked in to their wellies.

But now the store has taken steps to stop the encroachment of nightshirt-wearing customers frequenting their store, and several people were in favour of the decision.

Judy Bale said: ‘How very sad that self respect and dignity is no longer valued. Good on you, Tuffins for taking a stand. Get respect for yourselves people.’

Ruth Louise added: ‘Good old Harry Tuffins – make a stand, time to get the population respecting themselves and their society. Get dressed.’ 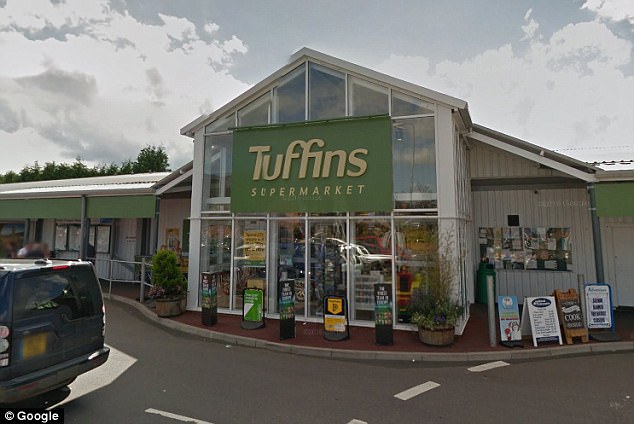 Jan Hoad said: ‘Bad news when people can’t be bothered to get dressed before they go out, what society are we breeding now?’ Neil Amis added: ‘Thank God for that.

Moira Kane said: ‘All commercial venues should say this. Saw mother and daughter in Home Bargains 3pm in their PJs and dressing gowns. Bloody ridiculous, grrr.’

Others said they frequently went to the shop wearing their pyjamas. Beth Lloyd said: ‘I went there in my PJs once. They didn’t tell me to leave.’

Jayce Unitt added: ‘I’d be careful about putting signs up like that. You’ve basically just told 95 per cent of your customers that they aren’t welcome.’

The Tuffins chain was sold to the Midcounties Co-Operative Society in 2012, before Paul Delves, grandson of founder Harry Tuffin, bought the Craven Arms site in 2013.

Tuffins, owned by Mr Delves’s firm Delves and Co, has been asked for comment.