Shroud-waving NHS bosses, egged on by the BBC, are a plague of every winter

Alarm bells are ringing loud and long, the klaxons reaching full volume. This week we have been subjected to a barrage of grim warnings about the crisis that is beginning to engulf the NHS in the wake of the pandemic.

Overstretched, short-staffed and underfunded, the health service is said to be facing the worst winter in its history, according to NHS Providers, which represents bodies such as hospital trusts and the ambulance service.

Predictably, this chorus of anguish has been taken up most notably by the BBC, whose own dependence on public funding gives it a vested interest in defending another arm of the State.

Indeed, the Corporation often seems only too keen to act as a voice of propaganda for the NHS, peddling scare stories about its supposed lack of resources while simultaneously praising the magnificence of its workforce.

That has been the pattern again in recent days.

On Monday morning, BBC Radio 5 Live was dominated by discussion about the looming winter crisis, complete with the usual paeans of praise for its fortitude, juxtaposed with despair at its failings born of cheeseparing.

More of the same followed on Radio 4, where the Today programme is focusing on the NHS and its future. Yesterday it was the experience of the NHS in Newcastle.

From there, health editor Hugh Pym said that for local hospitals ‘every week seems more hectic than the last one’, adding that ‘the strain will get even more intense’.

Presenter Martha Kearney spoke of ‘hospitals beyond full stretch’, a theme eagerly taken up by Chris Hopson, the chief executive of NHS Providers.

In his interview with her, he wailed that staff are ‘running at full pelt’ but left exhausted ‘by insufficient capacity’.

The NHS is now paying the price, he explained, for ‘a broken workforce model’ and ‘the longest and deepest financial squeeze in our history’ over the past decade.

This brings us to the nub of the issue. With the BBC acting as collaborators, NHS managers are indulging in a crude form of political blackmail. 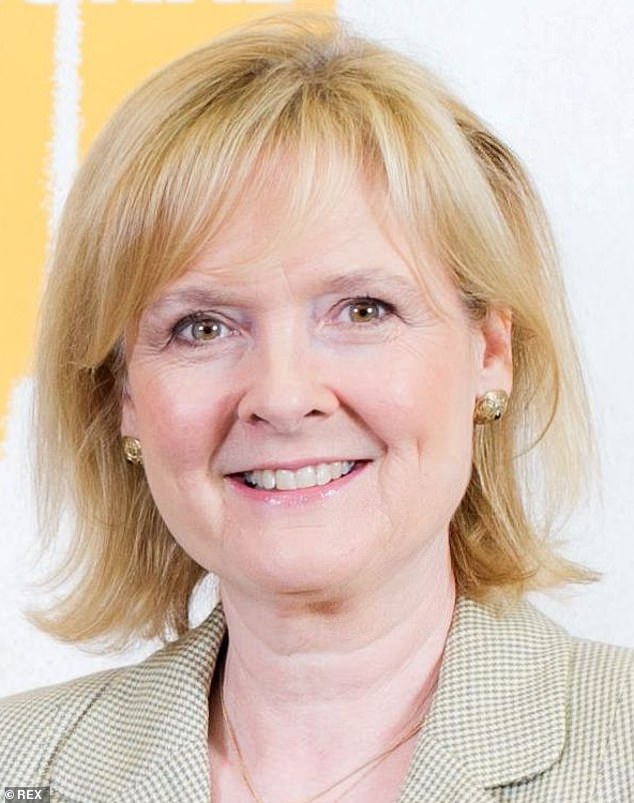 The aim of all this shroud-waving is clearly to compel the Government to inject yet more money into the NHS.

This approach has already proved effective, with record sums being handed to our beleaguered health service.

Incredibly, 40 per cent of all day-to-day spending by the State now goes to the health sector. And this trend is set to be accelerated when the Government’s 1.25 per cent National Insurance hike takes effect in April, generating an extra £12 billion a year for health and social care.

In his Budget last month, the Chancellor also promised another £6 billion to clear the Covid backlog.

Yet if there is one thing we know about the NHS, it is that whatever the sums involved, they are never enough. The NHS seems permanently on the verge of meltdown. 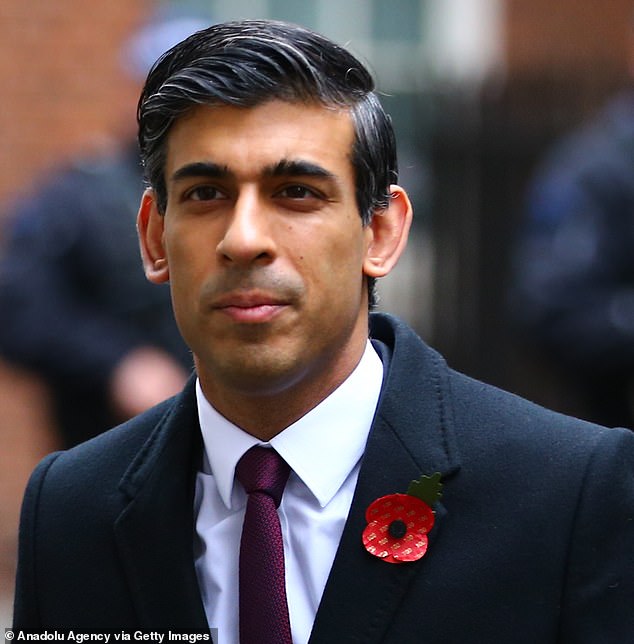 In his Budget last month, the Chancellor (pictured) also promised another £6 billion to clear the Covid backlog

But it is this perpetual talk of doom that makes me so sceptical. I have been working in the NHS for 35 years and, as far as I recall, every coming winter has been hailed as likely to be the ‘worst ever’.

In fact, the proclamation of inevitable disaster is almost a traditional pre-Christmas ritual, undimmed by reality.

Nigel Lawson, a Tory Chancellor for six years in the 1980s, said the NHS was the closest thing the English people had to a religion — and the prospect of a Biblical-scale apocalypse features heavily in the vision shared by the most fervent adherents of this faith.

But there is no justification for panic. The impact of Covid is being cynically exaggerated for political ends, an approach epitomised by a statement from the new NHS chief executive, Amanda Pritchard.

A week ago, having claimed the NHS is ‘running hot’ with ‘very real pressures on health and social care’, she said: ‘We have had 14 times the number of people with Covid in hospital than we saw this time last year.’ 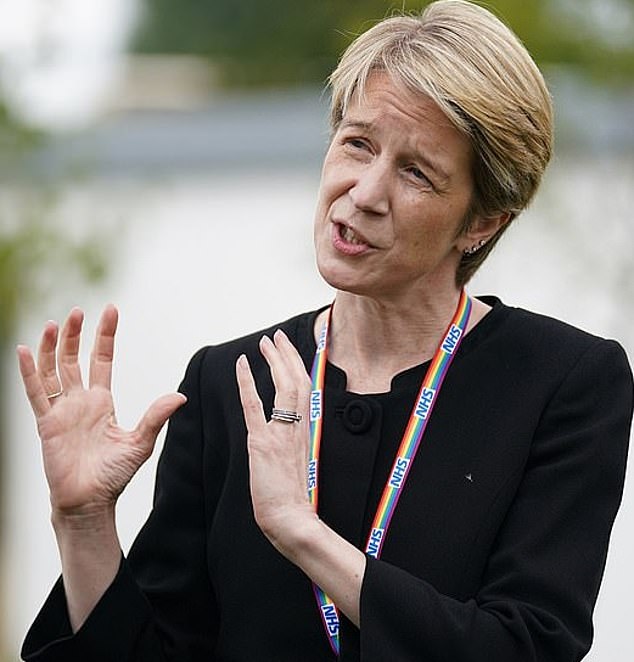 . The impact of Covid is being cynically exaggerated for political ends, an approach epitomised by a statement from the new NHS chief executive, Amanda Pritchard (pictured)

In fact, the number of people in hospital with coronavirus was far lower than at the same time last year.

NHS England later clarified that Pritchard had been referring to admissions in August 2021, the most recent set of published monthly figures, which were 22,877, compared with 1,629 in August last year.

But Ms Pritchard’s highly selective use of outdated figures went completely unchallenged by the BBC.

Equally unconvincing is the theory that a surge in Covid cases is set to overwhelm the NHS — a threat Boris Johnson talked up at his press conference on Monday, with reference to ‘storm clouds’.

Such language is badly misplaced. The worst of the Covid pandemic is behind us, as deaths continue to decline and the vaccine programme extends its reach.

Nor do I believe there is any basis for anxiety about the threat from a new wave of flu.

Those who shriek about the ‘worst winter ever’ should recall 1957, when the Asian flu outbreak killed 33,000 people in the UK; and the Hong Kong flu epidemic of 1968, which accounted for 80,000 lives.

Yet the NHS coped then, and will do so again. 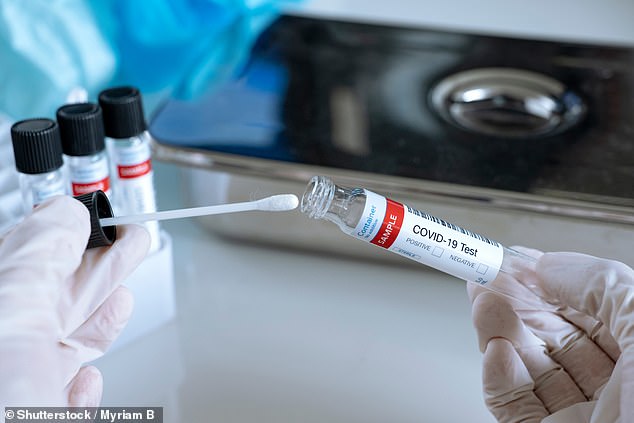 The worst of the Covid pandemic is behind us, as deaths continue to decline and the vaccine programme extends its reach (stock image)

Paradoxically, the advent of Covid has actually made life easier for the health service in one respect: by encouraging a far higher take-up of the flu vaccine, particularly among those aged over 65.

As a result of this — and more hand-washing, wearing of face masks and social distancing — influenza rates have tumbled in Britain since the coronavirus outbreak.

According to government figures, there were only nine hospital admissions in England last winter for flu, compared with 1,671 in 2019/20.

One analysis by Public Health England found there were no flu cases detected at all between December 28, 2020, and February 14, 2021. 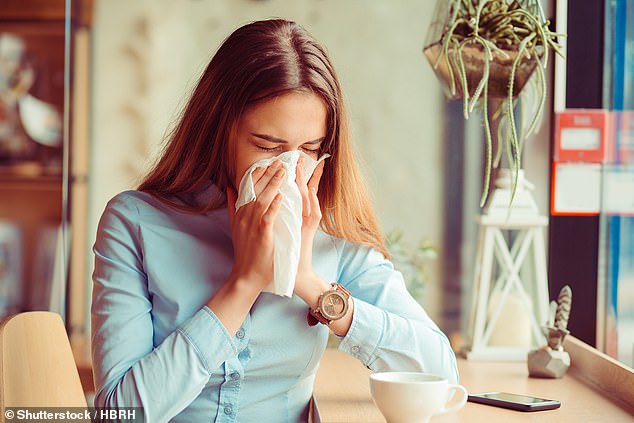 One analysis by Public Health England found there were no flu cases detected at all between December 28, 2020, and February 14, 2021 (stock image)

Even if there is a small rise this winter, it is unlikely that influenza will return to anything like pre-Covid levels, when in a bad year it could kill around 30,000 people.

Yes, hospitals face a backlog of operations built up during the period when the NHS became the National Covid Service. But while delaying operations such as cancer surgery is not an option, some elective procedures will just have to be postponed until the spring, because it is impossible to carry on completely as normal at a time of national emergency.

One of the worst aspects of the current alarmism is how it will be used to block reform in the NHS. Buttressed by sentimentality and BBC cheerleading, the health service pretends its problems can only ever be solved by more money.

But the truth is, extra funding can actually worsen its inadequacies by entrenching the interests of its workforce over its patients and perpetuating flawed structures, sprawling bureaucracies and chronic inefficiencies.

We could do so much better if the blind NHS-worship and incessant gloom-mongering were dropped. The cycle of manufactured crisis only lowers staff morale, leaves the public fearful and inhibits the drive for vital change.