Shurmur: ‘Can’t wait to get to work’ with Eli Manning

New York Giants coach Pat Shurmur made it clear during his introductory press conference Friday that he ‘can’t wait to get to work’ with veteran quarterback Eli Manning, who will continue to start for the Giants in 2018.

On Friday Shurmur, who served as the Minnesota Vikings’ offensive coordinator this season, gave his evaluation of the 37-year-old Manning and discussed the team’s 3-13 record in 2017.

‘I think the relationship’s gonna be very strong, I’ve watched him, competed against him, admired how he’s played over the years,’ Shurmur said of Manning at the news conference in East Rutherford, N.J. ‘Got to spend some time with him this summer.

‘He’s an outstanding football player and I can’t wait to get to work with him. I like the way he’s handled things, his calm approach to the position.’

Manning just completed his worst statistical season since 2013, throwing for 3,468 yards with 19 touchdowns and 13 interceptions. The yards were actually his fewest since 2008. 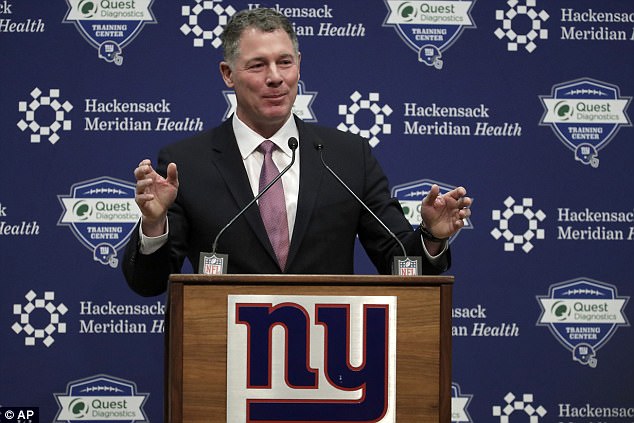 Pat Shurmur speaks after being introduced as head coach of the New York Giants during an NFL football news conference. The 52-year-old plans to keep Eli Manning as his starting QB

Shurmur gave no indication to suggest the team will move on from Manning, the first overall pick in the 2004 draft.

‘I think he’s got years left – how many, I don’t know,’ Shurmur said of the two-time Super Bowl champion.

‘With regard to the draft, I’m not ducking that question,’ Shurmur said. ‘We’ve got to travel down that road of evaluation. … We’ve got a guy here who’s helped this organization win Super Bowls.’

General manager Dave Gettleman said at his introductory press conference last month that the Giants like what they have at the quarterback position, which includes Manning at a $22.2 million salary and backup Davis Webb, a rookie in 2017. 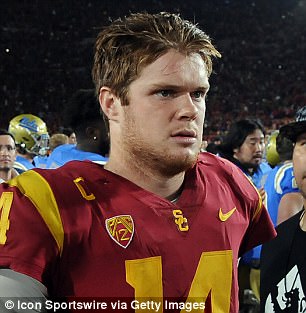 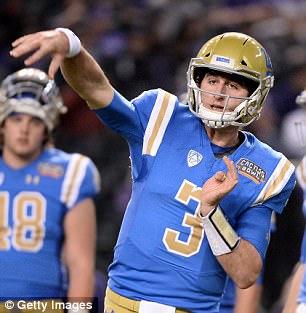 USC’s Sam Darnold (left) and UCLA’s Josh Rosen (right) are two of the quarterbacks the Giants could take at the 2018 NFL Draft. Either could be groomed to be Manning’s replacement 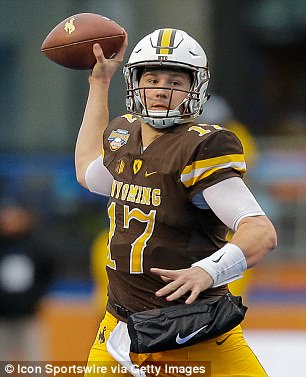 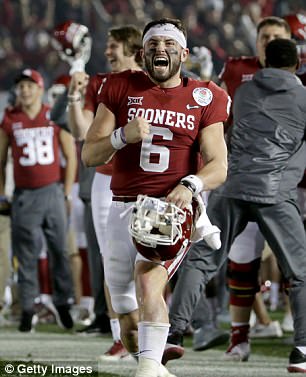 Manning told the Giants he would not stand in their way if the team were to draft his eventual replacement this year, like Wyoming’s Josh Allen (left) or Oklahoma’s Baker Mayfield (right)

However, Manning would not stand in the way if the Giants decided to draft his eventual replacement in the 2018 NFL Draft.

‘Yes, he’d be OK with that,’ Mara said Friday. ‘He’s a competitor and a professional. I don’t think that’s going to phase him in the least.’

Shurmur reportedly received a five-year contract with the Giants to replace Ben McAdoo, who was fired on December 4.

Manning’s streak of 210 consecutive starts came to an end in November when he was benched by McAdoo, who originally gave Manning the option of starting the game in Oakland in order to preserve the streak, but with the caveat that the two-time Super Bowl MVP would be removed in favor of backups Geno Smith and Webb.

Manning declined, saying that it would ‘tarnish’ his streak.

Interim coach Steve Spagnuolo, who served as interim coach before Shurmur was hired, reinstated Manning back into the starting role.

According to Giants co-owner John Mara, keeping Manning at the helm was important to the organization.

‘Obviously it’s something that we wanted,’ Mara said Friday. ‘One thing about Pat was that he was very positive about Eli in the interview. Certainly that was a positive.’ 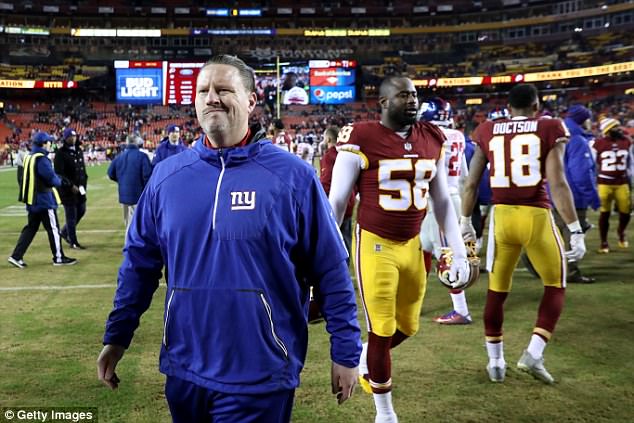