Sia reveals she had ‘crazy diarrhea’ after meeting Donald Trump

Sia’s meeting with Donald Trump in 2015 had very real consequences on her health.

The singer, 42, opened up about the encounter, which happened when both of them crossed paths on Saturday Night Live, in a new interview with Rolling Stone.

Sia served as the musical guest for the episode while Donald, 72, then a presidential candidate, was picked to host the popular comedy show, a year before his election.

Memories: Sia has candidly opened up about her meeting with Donald Trump on the SNL set in 2015 (both are pictured with SNL cast member Kate McKinnon)

After the show, Sia told Rolling Stone, Donald called her name as she was heading back to her dressing room.

Past: The singer (pictured last year without her wig) revealed she declined to take a photo with the then-presidential-candidate

According to Sia, the real-estate tycoon said: ‘We’ve got to get a photo!’

Donald’s daughter Ivanka, now 36 and one of his senior advisers at the White House, was standing nearby with a camera in her hand, Sia told the publication.

While the singer, according to Rolling Stone, is terrified of hurting other’s feelings, she feared that being photographed next to Donald would cause uproar among her fans.

By then, Donald was five months into his presidential campaign.

He had already made sweeping, disparaging comments about Mexican immigrants, claiming that many of them were ‘criminals, drug dealers, rapists’, and pledging to build a wall along the U.S.-Mexico border.

She finally told him: ‘Actually, do you mind if we don’t? I have a lot of queer and Mexican fans, and I don’t want them to think that I support your views.’

The presidential candidate, according to Sia, didn’t seem to mind her refusal and told her: ‘Oh, no problem. Then don’t.’

‘It was as if he viewed me as protecting my brand,’ Sia added. ‘He respected that.’

The singer wasn’t afraid to reveal a personal detail about the encounter, recounting she thanked Donald then ‘went into [her] dressing room’, where she ‘had crazy diarrhea’. 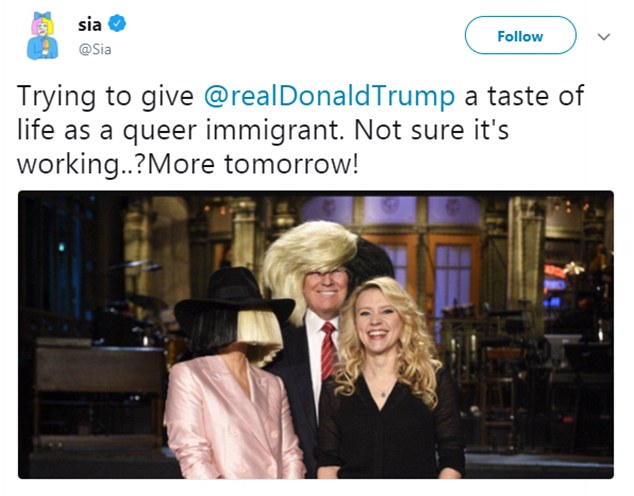 Message: Before the show aired in 2015, Sia, who is Australian and identifies as queer, said the tried to give Donald ‘a taste of life as a queer immigrant’

Back in November 2015, before the show aired, Sia shared a photo of herself, Donald, and SNL cast member Kate McKinnon on Twitter.

In the photo, Donald is wearing a black and peroxide wig that resembles Sia’s trademark accessory.

Sia, who is originally from Adelaide, Australia, and who identifies as queer, explained in her tweet that she was ‘trying to give @realDonaldTrump a taste of life as a queer immigrant’.

‘Not sure it’s working…?’ she added in her tweet at the time. ‘More tomorrow!’

Jon Rudnitsky, who was an SNL cast member between 2015 and 2016, later revealed that during his turn as host, Donald took issue with some of the sketches that were offered to him if they didn’t praise him enough.

‘He had trouble with the sketches, and if a sketch wasn’t complimentary about him — mainly physically — he wasn’t into it,’ Rudnitsky told People in 2017. ‘He’d go, “It’s cute, but no — next.”‘

Rudnitsky added: ‘He was just onto the next if it wasn’t about how great he was. I’m totally serious. I mean, there were some really funny sketches that he just didn’t get. His sense of humor is definitely skewed.’