The woman who spread her nan’s ashes on the SCG as fans swarmed Buddy Franklin to celebrate his 100th AFL goal has revealed the touching truth behind her tribute.

While other fans raced to be near the Swans star, Krystal Clayton and her cousin Joel Brown raced to the centre circle to recognise their own Swans immortal – their superfan grandmother, Edna Dixon.

Once there, Ms Clayton quickly tipped out a plastic bag containing the dusty remains of Edna, who died last year at the age of 93.

‘She would have been ecstatic at the celebrations, for sure,’ Ms Clayton said.

‘Even in her 90s she would have wanted to be there. We’d have been in big trouble if we’d gone there without her.’

Edna Dixon, who died last year aged 93, couldn’t be there in person when Buddy kicked his 1000th goal and would have wanted to – so her grandchildren took scattered her ashes in the middle of the chaotic celebrations 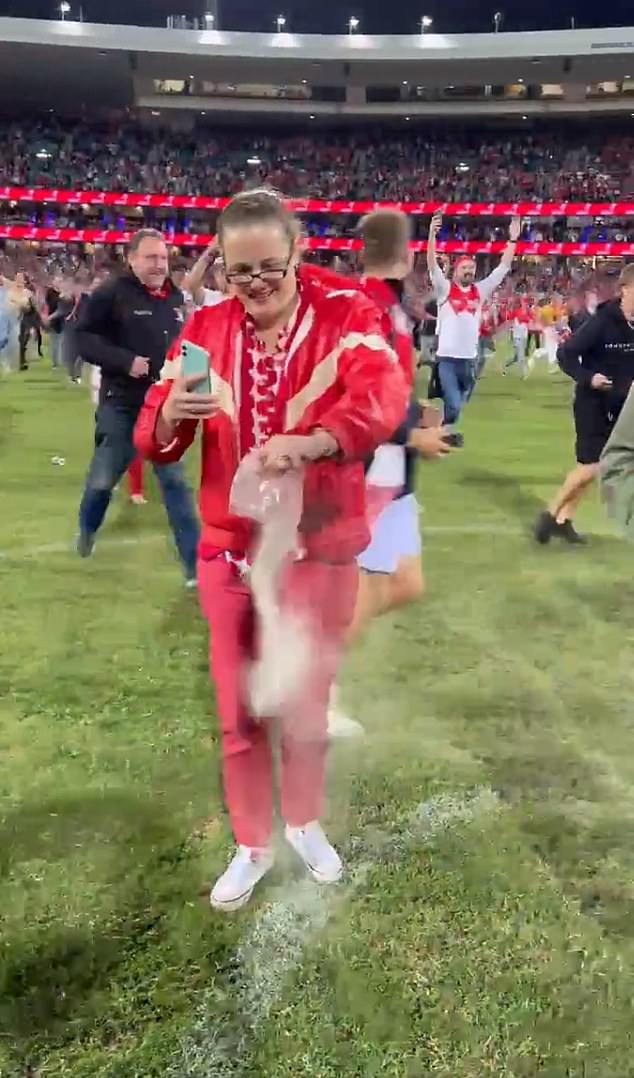 Krystal Clayton, who spread her nan’s ashes on the SCG as fans swarmed the ground seconds after Buddy Franklin kicked his 100th AFL goal, has revealed the incredible backstory behind her tribute 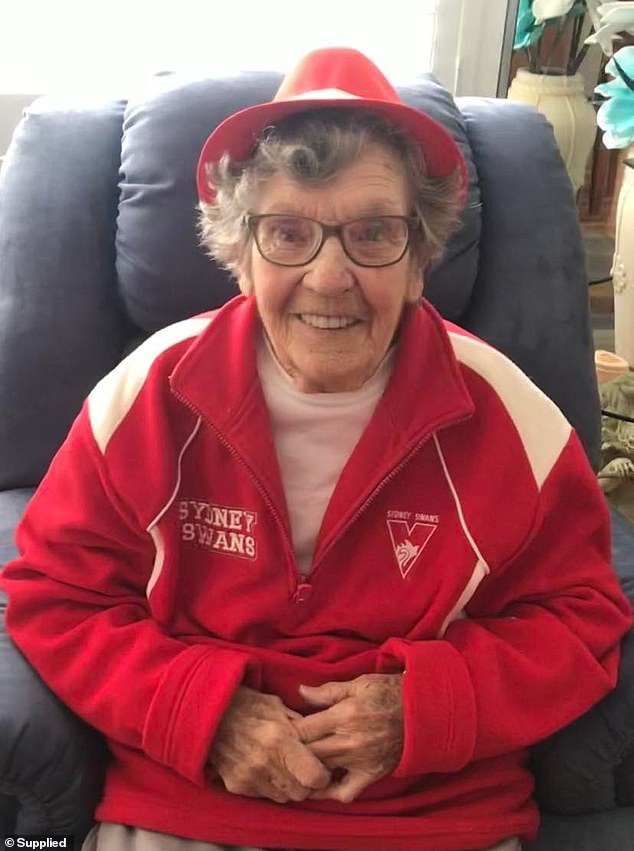 ‘Edna was not one to sit at home knitting,’ her grand-daughter Krystal said. She would rather be at the footy drinking and smoking

‘This was the next best thing. A few people have said I shouldn’t have done it, but I’m hoping Edna would have been proud of what we did.’

Ms Clayton has faced criticism for spreading Edna’s ashes on the playing surface while the game was technically still going on.

Play was suspended for 33 minutes while police and security regained control and cleared the pitch before the final six minutes of the match against Geelong was played out.

Little mattered as much to Edna as her beloved Swans for 40 years, Ms Clayton said. 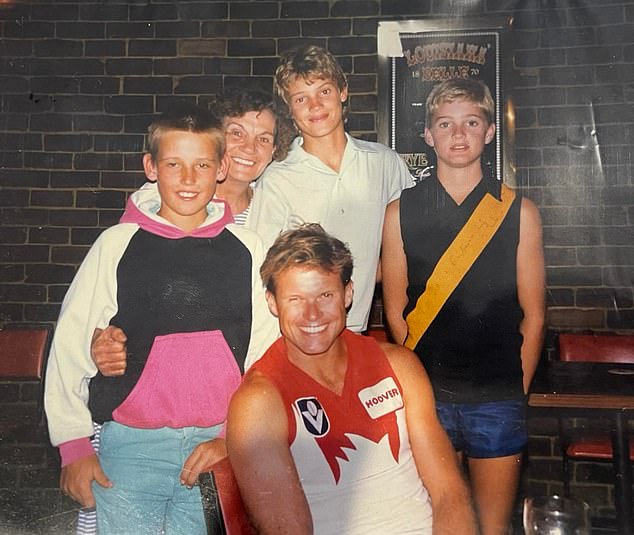 Edna Dixon got her children and grandchildren involved in AFL from the 1970s and when the Swans took over from South Melbourne in 1982, Edna couldn’t keep away from the SCG 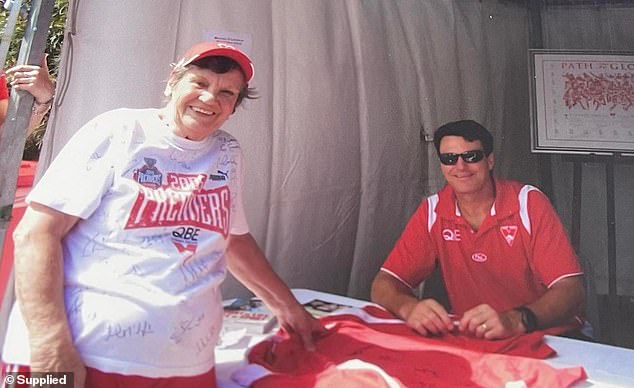 Edna shed a tear when Paul Roos’ Swans won their first flag for 72 years in 2005 (pictured, Ms Dixon with Roos) 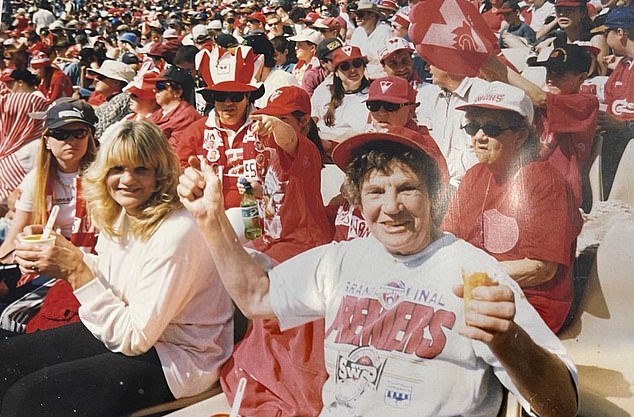 Edna Dixon was no ordinary granny – she couldn’t wait to dish it out to traveling teams and fans, but she was a soft person at heart, said her family

When the Swans, under Paul Roos, won the club’s first premiership in 72 years in 2005, Edna cried.

‘She’d had a few drinks, so I think she flashed her bum that day too,’ revealed Krystal. ‘She definitely was not your conventional grandma.

‘Edna was not one to sit at home knitting. She would rather be at the footy drinking and smoking. 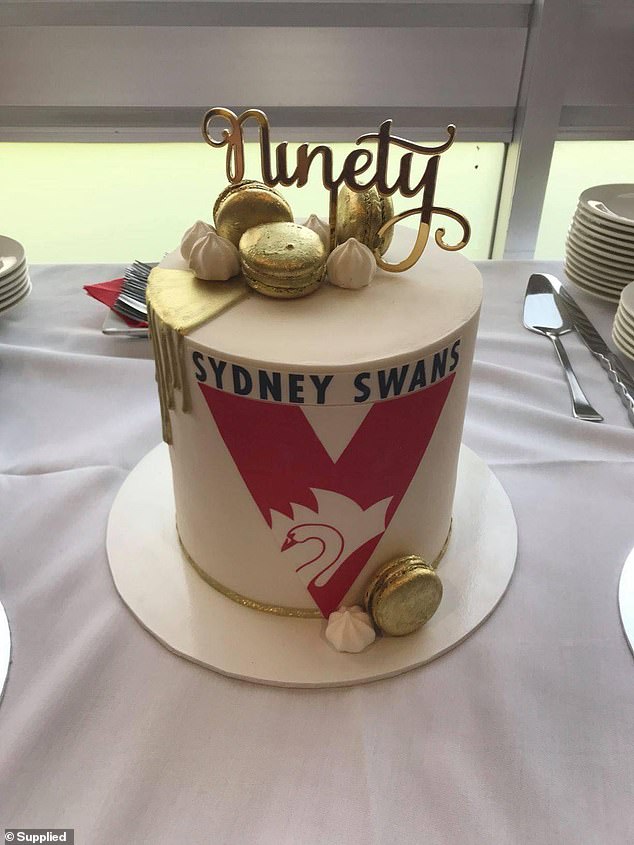 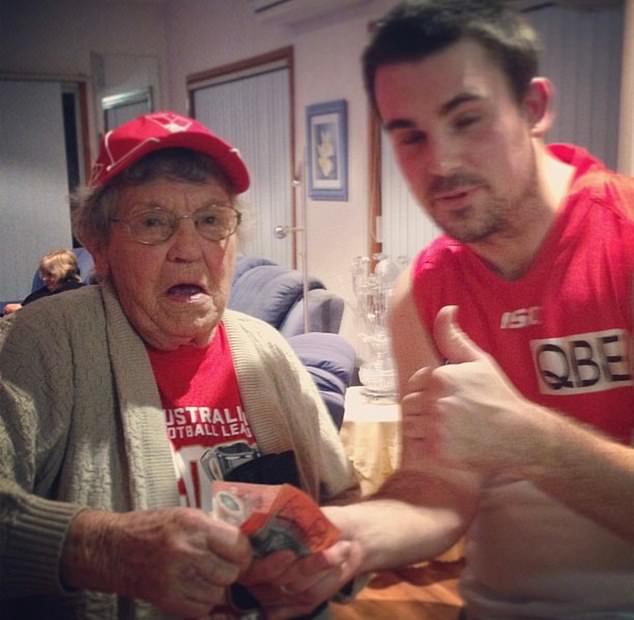 ‘She would sneak a couple of cans of VB into the ground, inside an empty Pringles box, wrapped in tin foil to try and keep them cold,’ Ms Clayton remembered.

‘Nobody checked her bags at the gate, they thought she was just a sweet old granny.’

For almost 40 years, Edna made a personal pilgrimage from Gosford to nearly all of the Swans home games, taking four or five grandchildren at a time.

Ms Clayton, now 38, remembers setting off on the morning of every home match when she was 10, led by her nan’s steely determination to get the best seats possible.

‘We’d get the train and get there before 9am, she’d push us to run in and get the closest seat behind the goal, right down the front – and that’s where we’d sit until 2pm.’

Opposition fans and teams quickly learned not to under-estimate the fiery granny with the prime seats beside the goals.

She relentlessly barracked against Sydney’s opponents – teams and players – including Franklin, until he joined the Swans in 2013.

‘They she thought he was a genius,’ said Krystal.

It was the same with Tony Lockett and Barry Hall: ‘She’d abuse them until they joined the Swans. It was the Swans that mattered most.’ 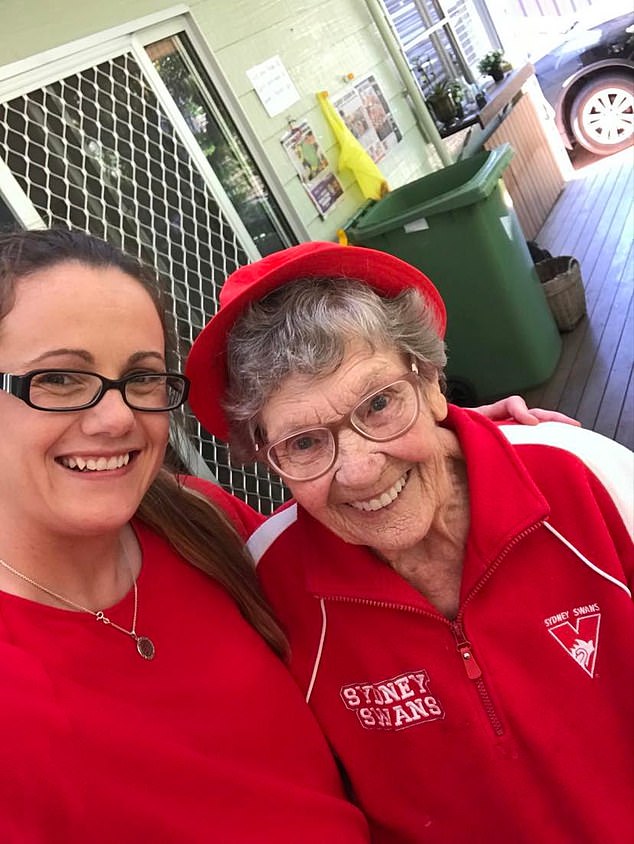 Edna with her grand-daughter Krystal Clayton 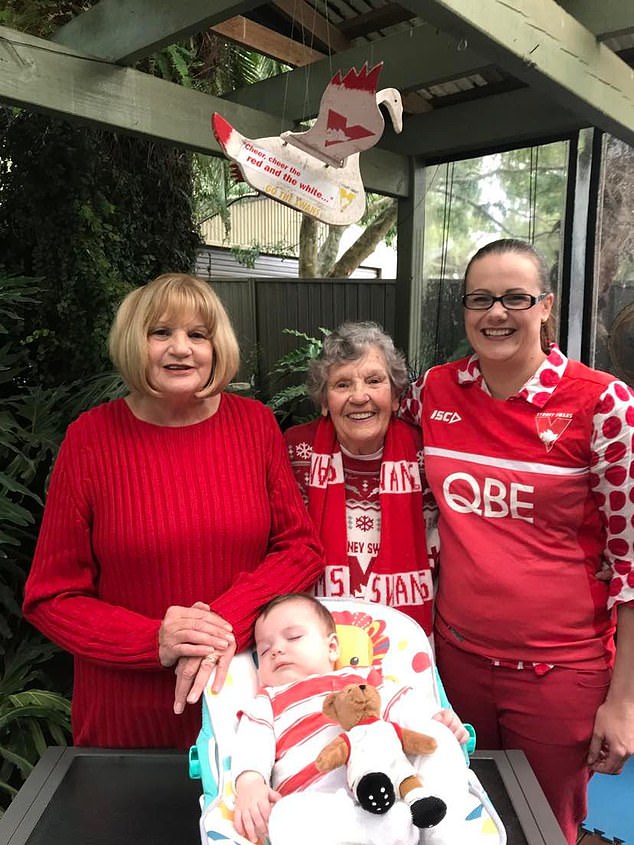 The Swans – and family  – were Edna’s life

She didn’t have much time for umpires – regularly removing her glasses to offer them to officials – or to rugby league fans.

Ms Dixon was among the club’s most dedicated fans for entire Swans era – which began when South Melbourne relaunched as the Swans at the SCG in 1982.

Ms Clayton remembers running out on the SCG for Lockett’s 1000th goal in 1995 when she followed Edna onto the oval.

She had clambered over the hoardings even though she was in her late 60s at the time.

‘It was a bit of a struggle, but she ran out for that. In fact we usually struggled to keep up with her,’ Krystal added.

‘I remember running out and a kid went down next to me and I stopped to pick him up and it was my brother.’

Edna grew up a Footscray fan, but when she moved to the NSW Central Coast to have a family in the mid-1970s, she got active in the local AFL club, the Gosford Tigers.

She worked as a humble cleaner for most of her life but loved footy and that’s where she put her energy.

She enrolled her children and grandchildren to play at the club and eventually she became its president. 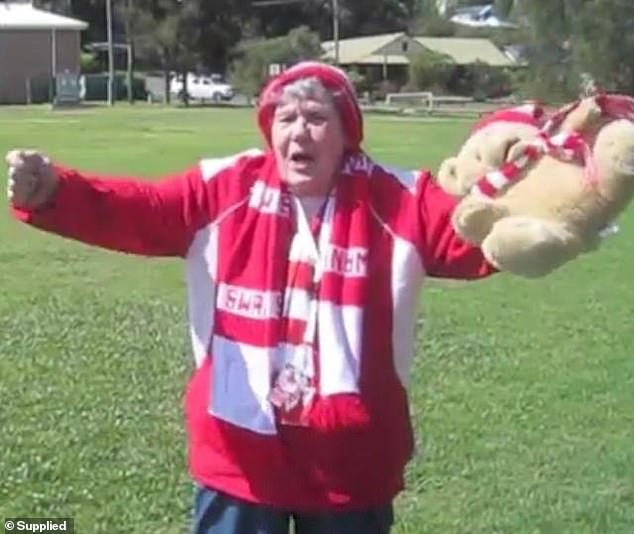 When Sydney got a team she was ready to move on from Footscray.

‘It was her motto that you go for a team where you live,’ Krystal said. ‘If she met anyone at the SCG who supported the opposition she would give them heaps.

‘If someone living in Sydney supported Hawthorn she’d say, “No! You can’t do that”.

‘She’d say you support the town you earn your money in.’

Edna wasn’t a casual fan – even into her final years.

Right up to the age of 90 she insisted on the full Foxtel sports package at home – so she could watch games, rewatch them and take in the midweek footy show too.

Krystal added: ‘She’d come alive during the AFL season, she got a new lease on life.’

Ms Clayton remembers her grandmas Edna as passionate and funny – but not lacking a softer side either.

She was known for helping out anyone at the Gosford club who was doing it tough.

She took in one promising young player who was having a tough time at home, giving him a new safer place to call home.

And when the chance came to make her forever part of the very fabric of the SCG, her family did not hesitate for a second.

Krystal added: ‘She taught us to live life to the fullest.’