Sickening moment gang of youths punch a man to the ground

A gang of six thugs punched a man to the ground and kicked and stomped on his head in a shocking brawl on Sydney’s northern beaches.

Disturbing footage showed the 22-year-old as he was set upon by the another man just before 8pm on Wednesday in Newport.

Suddenly a whole group joined the fray as two teens allegedly punched him before one fly-kicked him to the ground.

Four more youths joined in and soon the defenceless man was being pummeled from all angles as helpless locals watched in horror.

Pictured: A 22-year-old man as he is allegedly beaten and kicked by a gang of teenagers in Newport, Sydney

Frightened and outnumbered, the man curled himself up on the concrete and used his arms to protect his face.

A nearby resident called triple-0 while another filmed the incident, 7 News reported.

Local man Ben Sami tried to intervene, but was threatened with a large stick.

‘It’s really out of control,’ he said. ‘Until the police presence is here, it’s not going to change.’

Local councillor Vincent De Luca has campaigned to have police numbers boosted in the area to stop a growing number of attacks.

‘A number of officers have come to me expressing concern,’ he said.

‘We’ve had two serious stabbings last year – it will only get worse and someone will be killed.’ 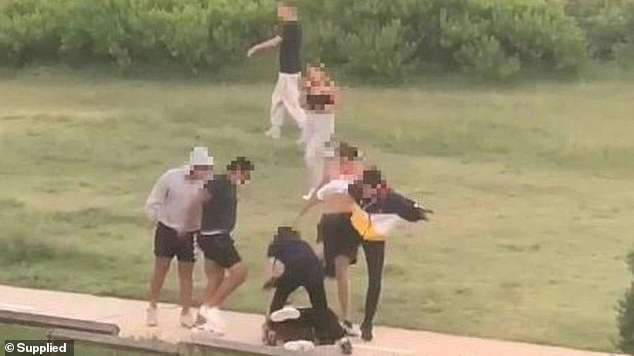 Mr De Luca said there was blood on the pathway after the attack, which ended when the boys fled the scene shortly before police arrived.

Locals claimed police took too long to arrive, but NSW Police said they were called at 7.55 and were on the scene 11 minutes later.

The victim called an ambulance and was treated for minor injuries, but has refused to make a statement.

Police arrested a 17-year-old boy on Thursday but have not been able to identify to other alleged attackers.

‘While no formal report has been made regarding the assault, we take all reports of crime seriously and detectives are working on identifying and finding those involved,’ Acting Detective Inspector Michael Keegan said.