Former President Donald Trump’s lawyer Sidney Powell called a top Pentagon official in the aftermath of the 2020 election to warn him that CIA Director Gina Haspel was stuck in Germany after traveling to the country on a secret election-related mission.

ABC News’ Jonathan Karl writes in his new book, Betrayal: The Final Act of the Trump Show, that Powell had been hoodwinked by a ‘false conspiracy theory that had been gaining steam among QAnon followers.’

‘Gina Haspel has been hurt and taken into custudy in Germany,’ Powell reportedly informed DOD official Ezra Cohen. ‘You need to launch a special operations mission to get her.’

According to Karl’s book, Powell was pursuing a conspiracy theory that a server located in Germany held evidence that thousands or even millions of votes had been switched.

‘Kraken’ lawyer Sidney Powell was pursuing a conspiracy theory that a server located in Germany held evidence that thousands or even millions of votes had been switched, and that CIA Director Gina Haspel had been hurt and taken into custody there 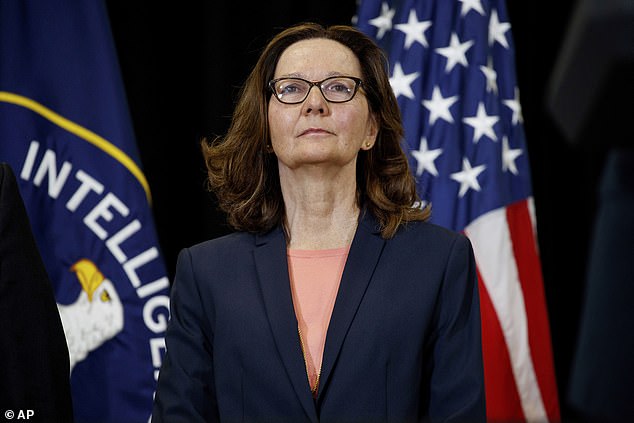 CIA Director Gina Haspel was not arrested, injured, or found dead, despite conspiracy theories to the contrary, Reuters reported 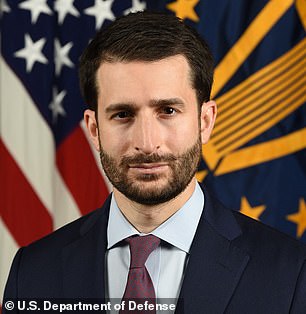 Haspel was in Germany to destroy that evidence, Powell surmised.

Powell wanted Cohen to ‘send a special operations team over to Germany.’

‘They needed to get the server and force Haspel to confess,’ Karl wrote.

Cohen, Karl wrote, ‘thought Powell sounded out of her mind,’ and reported the conversation up the chain, informing acting Secretary of Defense Christopher Miller.

‘He didn’t sound like the same guy he had worked for,’ Karl writes in reference to Cohen, who also sometimes goes by Ezra Cohen-Watnick.

Cohen had been promoted to acting undersecretary of Defense for intelligence and security a week after the election, on Nov. 10, 2020, along with other Trump loyalists following Trump’s firing of Defense Secretary Mark Esper.

But he wasn’t convinced by Flynn’s call to to seize ballots. 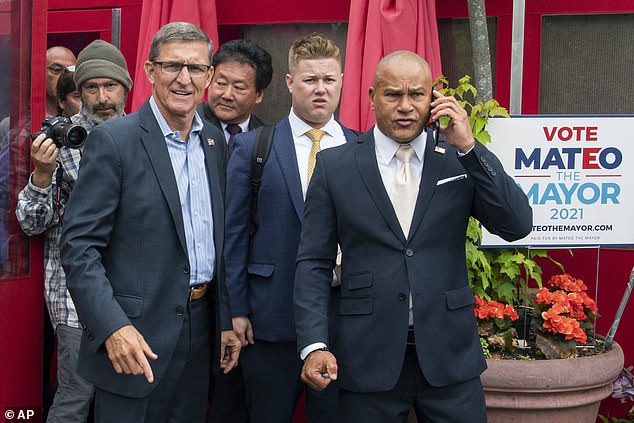 Michael Flynn, second from left, former national security adviser to former President Donald Trump, phoned Pentagon official Ezra Cohen to tell him ‘ballots needed to be seized’ after the presidential election, according to a new book

Flynn phoned Cohen after the election. Finding him to be overseas, ‘Flynn told him to cut his trip short and get back to the United States immediately because there were big things about to happen,’ Karl wrote.

Flynn told him: ‘We need you,’ according to Karl.

He told Cohen that ‘he needed to get orders signed, that ballots needed to be seized, and that extraordinary measures needed to be taken to stop Democrats from stealing the election,’ according to the book.

But the former aide didn’t give Flynn, a retired Army Lt. Gen., what he was looking for – prompting Flynn to call him a ‘quitter.’

‘Sir, the election is over,’ Cohen told him, according to Karl. ‘It’s time to move on.’

The excerpt was reported by ABC News.

Cohen’s DOD promotion is mentioned in a release by the House select Committee on Jan. 6th for documents and testimony from former chief White House strategist Steve Bannon, who was indicted for contempt of Congress for failing to comply with a subpoena.