Diners are sharing their most helpful, and occasionally obvious, advice for avoiding bad restaurants on Twitter.

And from the looks of their pictures — and some very specific warnings — it’s clear that some lessons, unfortunately, were learned the hard way.

Turn back! Twitter users are sharing signs that a restaurant is bad, noting that it is likely not a good sign if Kitchen Nightmares host Gordon Ramsay is filming there

Yikes! They’re using the hashtag #SignsOfABadRestaurant, and many seem to be sharing tales from their own experiences

True: It’s probably not a good sign if the staff doesn’t even want to eat there 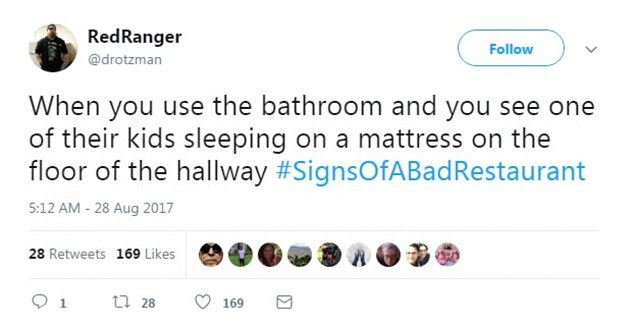 Family establishment: If the owner’s kids are running wild, it’s probably not a high-end joint 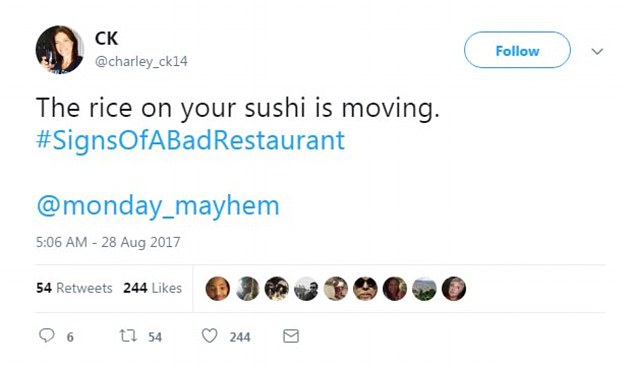 It’s alive! No one likes to find bugs crawling in their food

Some of the tweets are quite clearly jokes, with users noting that it’s never a good sign if meals are served with Pepto Bismol.

Or maybe they’re not jokes, after all. One user said that a sign of a bad restaurant was that the menus have barf bags attached — and included a picture of a brown paper bag fastened to her own menu.

Others pointed out obvious signs like rodents, swarming flies, and cockroaches — which, when visible to diners, are sure to put anyone off his or her dinner.

Several Twitter users even discovered those bugs in their food, as well as quite a few other things that definitely shouldn’t be there.

Users mentioned finding Band-Aids, staples, pieces of plastic, and wire garbage ties in their dishes, noting that those are definitely signs of a ‘bad restaurant’. 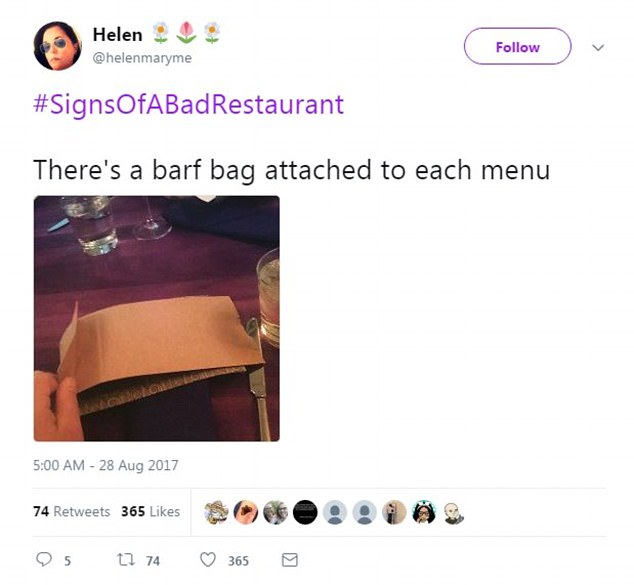 Trying to say something? If the eatery needs to supply barf bags, that should tell you something 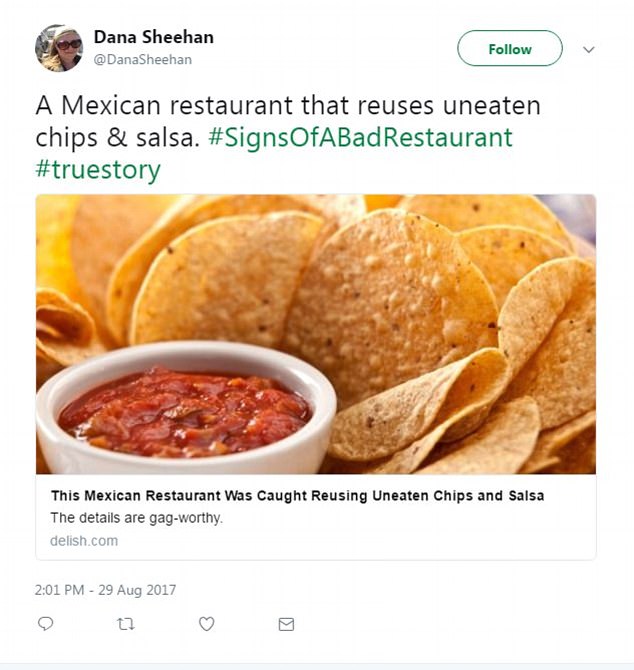 True story: A restaurant in Michigan was accused of serving customers chips and salsa that had already been on other diners’ tables

But guac is extra: Several people seem to believe that chips and salsa are a given for any Mexican restaurant

What flavor is that, exactly? This person didn’t find ‘Mexican soup’ to be appetizing

Classy: When there are no wine glasses around, that speaks volumes

Some mentioned a few ways diners can tell that the food isn’t good without even taking a bite.

If waiters are refusing free meals that come with their shifts, if they’re running out to nearby shops to purchase food for customers, or if they can’t seem to figure out their cuisine, you might be in trouble.

‘Sushi place with a pizza oven. Yes, I’ve been to one,’ wrote one person.

Another added that it’s not a great sign if a Mexican join charges extra for chips and salsa, and a third said that Italian eateries that don’t serve bread are probably problematic.

Then, there’s the stuff of nightmares. 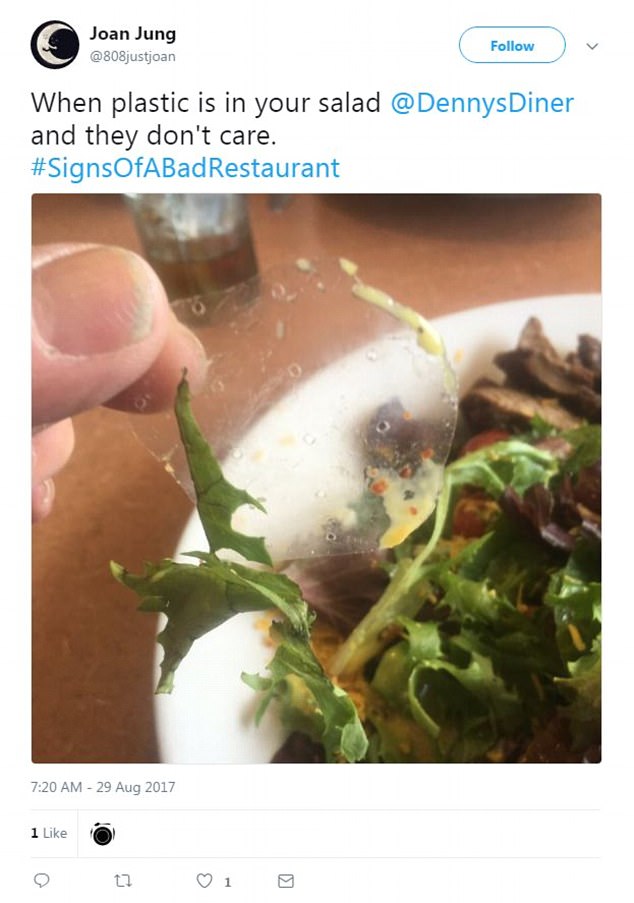 That ain’t lettuce: Several users shared images of horrifying things they found in their food 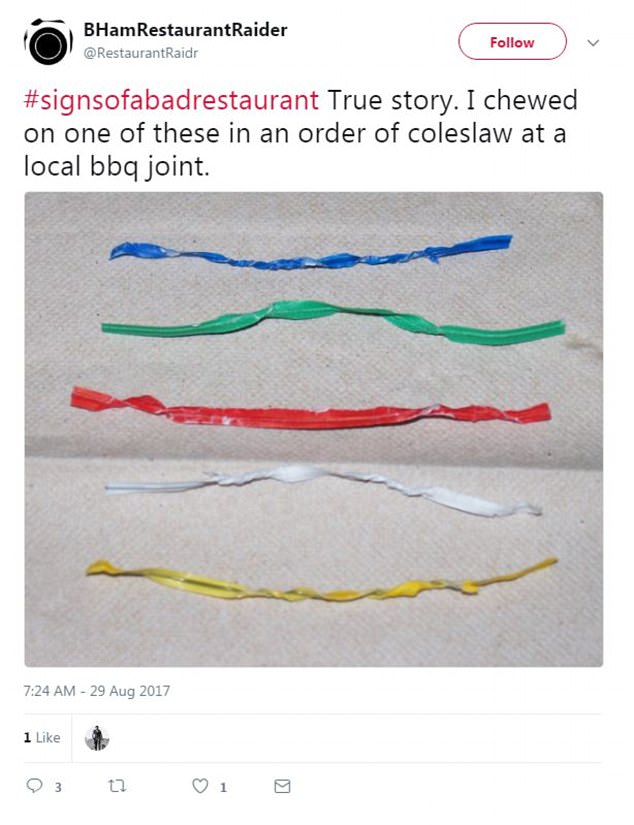 Chewy: This woman was probably wondering just how one of these plastic ties turned up in her food 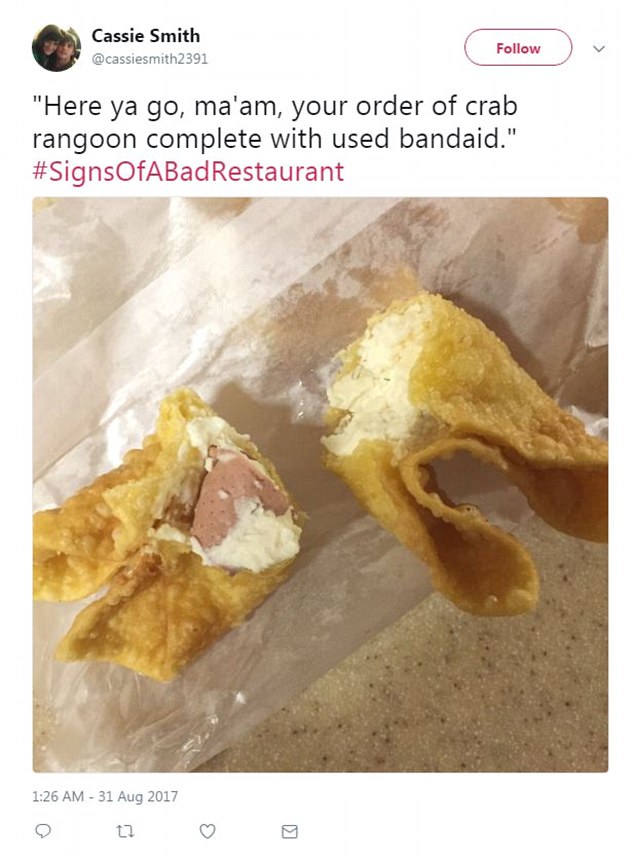 Blech: Luckily, it looks like this person broke open her crab rangoon before biting into it 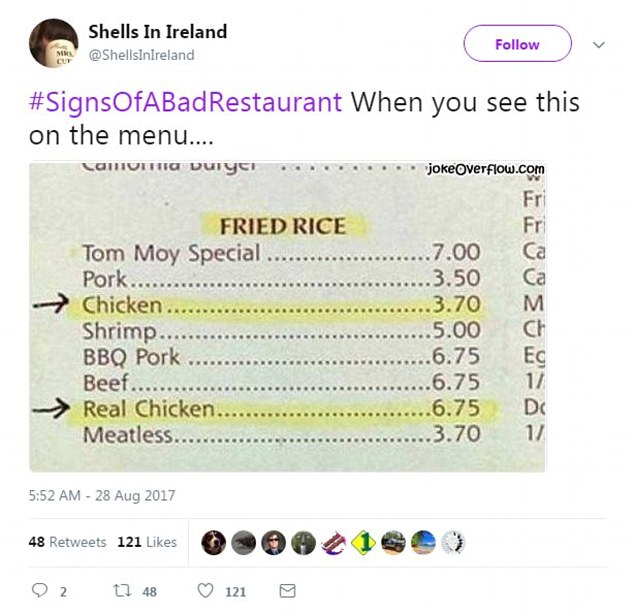 Lost in translation? This restaurant offers ‘chicken’ and ‘real chicken’, which is hopefully just a poor translation (perhaps for whole or white meat)

Did you Google Translate that? This Chinese restaurant seemed to mean ‘mushrooms’ when it wrote ‘fungus’ 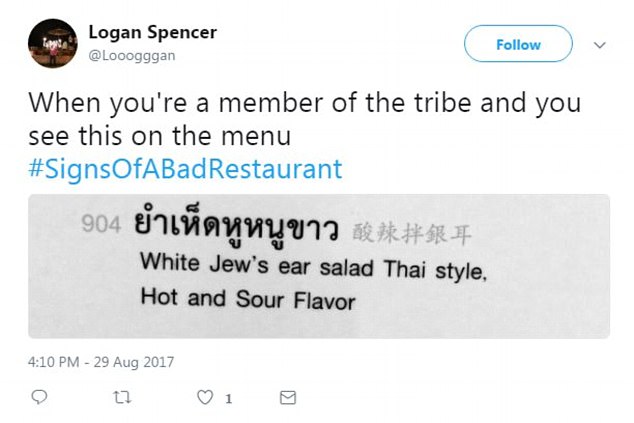 ‘Gordon Ramsey [sic] turns up with a film crew #SignsOfABadRestaurant,’ wrote one, pointing out that if the chef’s now-cancelled Kitchen Nightmares crew shows up, something is likely very wrong.

‘When you use the bathroom and you see one of their kids sleeping on a mattress on the floor of the hallway,’ wrote another.

A few even joked about bad translations on the menu — which likely aren’t an actual sign of a bad restaurant but can be scary if taken seriously.

One shared a Chinese restaurant menu that offered ‘lotus mixed with black fungus’, when it probably meant mushrooms.

Another charged one price for ‘chicken’ and another for ‘real chicken’.

A third menu had an item called ‘white Jew’s ear salad’ — a dish that has very likely, and hopefully, been poorly translated, though the actual meaning is unclear.