Retiring is a major change for anyone — whether the prospect makes your heart sing or sink.

But a growing number of older people are prolonging their working lives by setting up their own businesses or earning extra cash with start-ups.

The number of self-employed people aged 65 and over has more than doubled in the past 15 years, to close to 500,000, according to the Office for National Statistics.

Labour of love: Lorraine Johnson-Rosner makes £10,000 to £15,000 a year selling similar rooms and gardens for dolls, plus vintage dolls and clothes for them

And research by mobile business bank account ANNA suggests that one in five people making money outside of their day job is over 50.

But the rise in ‘olderpreneurs’ is not only down to people’s desire to bolster their pensions.

Starting a business in later life, when you are financially stable and have a bank of contacts, also gives you more flexibility and control.

Laura Suter, personal finance analyst at investment platform AJ Bell, says: ‘For many people, the thought of fully retiring fills them with horror, particularly considering we’re all living longer, and so retirement can stretch out for decades.

‘Going from working full-time in a high-pressure job to being at home seven days a week can be too much of a switch for some.

‘So, instead, by setting up your own business, you can gradually wind down work when you’re ready to with the added bonus of not having to do the dreaded commute.’

Seven years ago, Lorraine Johnson-Rosner, 70, had a conversation with her 23-year-old niece about winding down her garden design work and doing something less physically demanding.

‘Why don’t you do the doll thing?’ she suggested.

Lorraine and her niece used to spend hours together playing with her old dolls.

‘We used to dress them up and make little rooms for them, decorating the walls,’ she says.

Now, the mother of one makes £10,000 to £15,000 a year selling similar rooms and gardens for dolls, plus vintage dolls and clothes for them.

Each room takes her around a month to make and is bespoke. Lorraine has to track down all the components online, from dealers or markets, or make them herself. 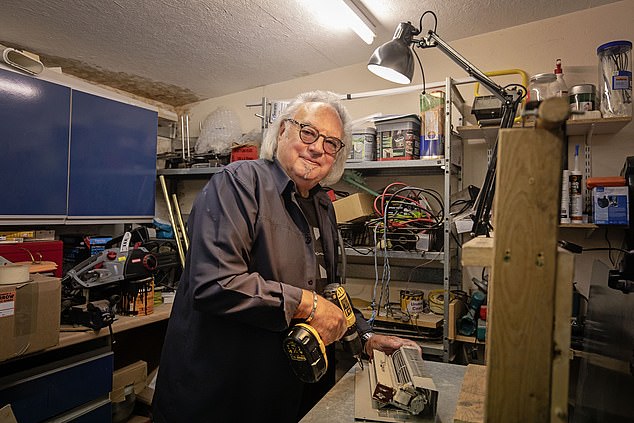 Gary Webster, 73, designed the RadBooster, a fan that sits beneath a radiator and helps to heat up a room faster

A miniature Dutch kitchen listed on her Etsy shop, GoodGollyMissDollyUK, for £175 features a tiny Sixties stove and sink unit by Schopper, a German company, plus a vintage cupboard and chairs and a table set for breakfast. There is even a tiny handmade cushion embroidered with a Dutch motif.

She says: ‘It is like decorating a real house. I’ve got to find the right paper for the walls and then find suitable fabric for the bedding. If I can’t find the right lamp, I might have to make one.’

Lorraine’s friends help to sew and knit the clothes, and to photograph the items for her online shop.

It cost a few thousand pounds to start the business. Lorraine says for the first two years she was mainly buying, and it was not until year three that she started making a bit of money. Now, every year she earns a bit more. 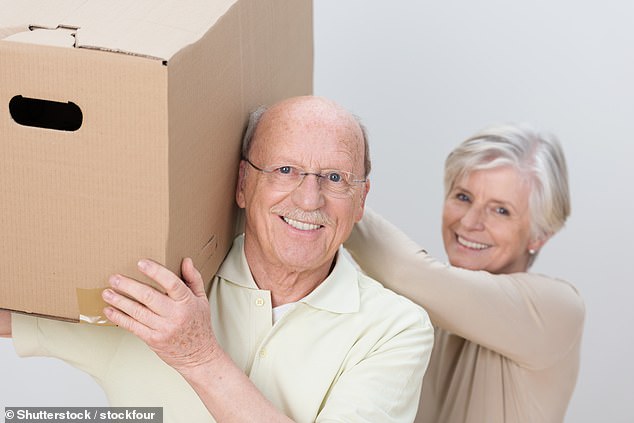 Some 2.2 million over-50s have set up their own businesses or invested in another, while a further 1.6 million (6 per cent) are planning to do so, according to Charter Savings Bank

Lorraine’s husband, Andrew, 75, still works as a music agent, and she says she’ll continue ‘tootling along’ with Good Golly Miss Dolly until she can’t any more.

‘Big restoration projects can take months and, in terms of earning, work out at £2.50 an hour,’ she says. ‘But my GP told me it is important to keep busy in retirement. If you go straight from work to daytime TV it is downhill — and fast.’

Some 2.2 million over-50s have set up their own businesses or invested in another, while a further 1.6 million (6 per cent) are planning to do so, according to Charter Savings Bank.

Gary Webster, 73, is one of them. He realised he wasn’t ready to retire a few months after stepping down from his role as managing director and part-owner of a heating manufacturer.

He had spent decades working in the heating industry and was itching to get back to creating something useful. So he designed the RadBooster, a fan that sits beneath a radiator and helps to heat up a room faster.

The grandfather of five put the whole thing together himself in his workshop at the bottom of his garden, but decided it would be better to have it manufactured by a company in Poole.

Gary, who lives in Essex with his wife, Lynne, says it cost £300,000 to get the business going, and everything he makes goes back into it.

He has sold more than 1,000 units this season and believes in another year he will have covered his costs.

According to the Mental Health Foundation, ‘participation in meaningful activities’ in later life is key to a person’s wellbeing.

The charity suggests exploring options with your employer if you want to carry on working, trying new activities before retirement, sharing your skills through volunteering and joining courses.

For many people, working for themselves — whether setting up a new business, turning a hobby into a job, or becoming a consultant — can be the best option for staying in paid work.

‘This can lead to a fulfilling opportunity that adds both meaning and money to their lives, or for others can mean earning a few extra pounds to help them scrape by.’