Comedian and professional prankster Simon Brodkin has handed Theresa May her P45, hijacked Kanye West’s Glastonbury appearance, breached Donald Trump’s security, made a holy fool of Simon Cowell and showered former Fifa president Sepp Blatter with banknotes. All without a flicker of fear.

‘You’ve never known fear,’ says Brodkin, ‘until you have told your Jewish mother that you’re giving up medicine to become a comedian.’

In the early Noughties, having trained as a doctor at St George’s Hospital medical school in London, then worked at Trafford General Hospital in Manchester for a year, Brodkin gave up the emergency ward for the comedy stage.

‘Obviously, people want to know why someone’s given up this well-paid profession to stand in front of a roomful of strangers. I tell them it was the pull of comedy rather than the push of medicine.’

For a time, the two worlds overlapped. ‘I was called to a cardiac arrest where the patient had simultaneously had a heart attack and thrown up a curry. I said, “I think he’s in a korma.” It must have got a laugh.’

Comedy won out, and Brodkin became best known as dopey alter ego Lee Nelson, a beaming, baseball-capped buffoon. But in the guise of sundry other characters he has pulled off a host of headline-grabbing stunts.

His outlandish escapades have landed Britain’s Greatest Prankster in custody, in court and on the receiving end of disturbing death threats, but Brodkin remains resolute in his mission ‘to make people laugh while unnerving a few so-called untouchables. Getting a chuckle is the reason I do it’.

To some he is a provocative modern satirist, for others he is ‘an unfunny pillock’, the comic cheerfully concedes.

Brodkin has always deployed disguises but next month he drops the mask and performs out of character for the first time in a confessional new solo show, 100% Simon Brodkin, at the Edinburgh Festival.

The painfully funny monologue explores growing up ‘on the mean streets of Hampstead’, his shortcomings as a partner, parent and ‘fairly rubbish Jew’, and his time as a doctor.

‘Working in the NHS was hardly a bed of roses,’ he recalls. ‘My mum and dad understood that it wasn’t exactly a gut-wrenching decision to leave.’

Although the pay for a leading consultant and a top comedian may be comparable, Brodkin is financially comfortable at 41 ‘and absolutely loving my job’, whereas some of his medical contemporaries are, he exaggerates for comic effect, ‘still sitting exams’. 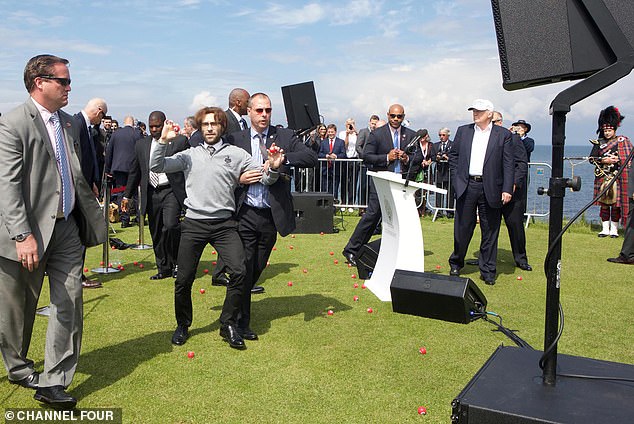 His new stand-up show examines the thinking behind his notorious ‘stunts, pranks, desperate cries for attention, call them what you will’.

Brodkin reveals how, in 2016, he evaded the US Secret Service to get within putting distance of Donald Trump on Turnberry golf course in Ayrshire and rolled dozens of swastika-emblazoned golf balls toward the President’s feet. If the symbolism was unsubtle, the reaction was even less so.

‘At first I thought Trump said “Take him out” but it was “Get him out!”,’ Brodkin says. ‘That confused the Secret Service because we were already outdoors. I guess that’s what I learnt about the Secret Service. Their secret is they’re a bit rubbish. I was at least expecting to get taken out with a high-voltage taser.’

Brodkin also ‘anticipated being shot’ as he approached a mid-speech Theresa May at the 2017 Conservative Party conference to hand her a fake P45 – the tax form given to departing employees – with the prescient words: ‘Boris asked me to give you this.’

It’s a sad day when you feel sorry for these people. They’re all deserving targets

‘After she’d taken the P45 off me, I went over to Boris and said, “It went jolly well, don’t you think?” I gave him a slap on the thigh but he did his best to blank me. Then they dragged me out.’

At Glastonbury in 2015, Brodkin interrupted Kanye West’s much-hyped appearance to dance alongside the self-aggrandising rapper and prick the fug of pomposity surrounding him.

‘I was shocked when I eventually got on to the stage because there was just him and a load of lights,’ admits Brodkin. ‘I thought I’d at least have to manoeuvre around his backing band, but there wasn’t one.’

When Brodkin flung cash at Sepp Blatter during a 2015 news conference in Zurich, to protest at the soccer boss’s alleged corruption, Blatter told him: ‘You should be ashamed of yourself.’ But Brodkin feels no remorse.

‘They’re deserving targets,’ he protests, palms upturned. ‘It’s a sad day when you’re feeling sorry for these seriously powerful people being made to look a little silly. If they get upset, that’s their problem.’

But what, you wonder, is Brodkin’s problem – did he have issues with the bigger boys at school? ‘I was the classic class clown and because of that people didn’t think I was clever. I wasn’t bullied as such but I wasn’t Mr Popular. And I was a little bit chubby,’ he murmurs quietly, then laughs loudly: ‘Are you saying I was fat?’

Brodkin claims to have been kicking against a form of emotional browbeating when he hoaxed the Britain’s Got Talent judges in 2016. 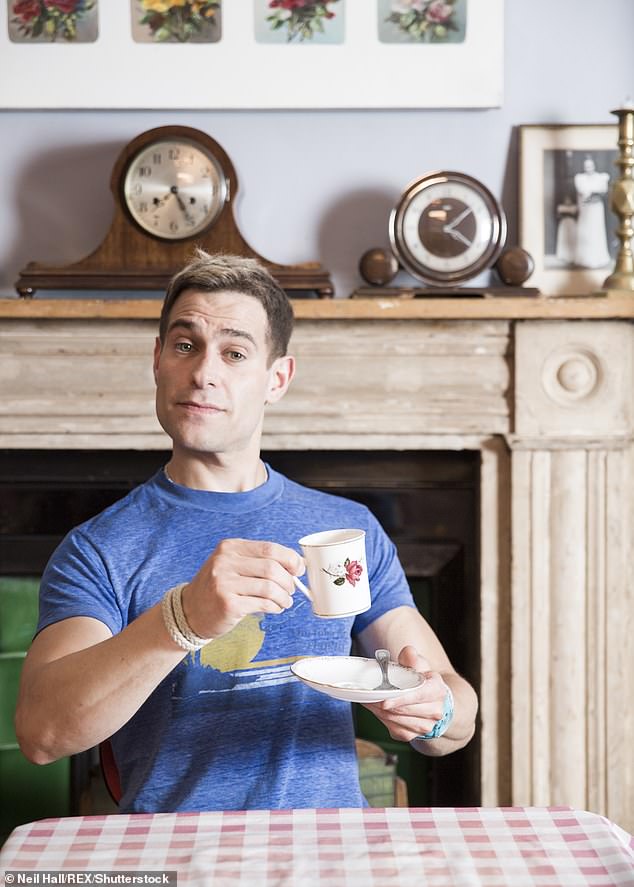 Brodkin in character as the cheerful chav Lee Nelson. Brodkin was targeted by white supremacist David Duke. ‘He outed me as a Jew,’ Brodkin frowns. ‘To be honest, I already knew’

Heavily disguised as Steven Goldblatt, an Orthodox rabbi, orphan and part-time carer, Brodkin set out to illustrate that ‘heart-breaking backstory triumphs over actual talent every time’.

At the final audition in London, after he had been awarded a ‘yes’ from all four judges, a production assistant recognised Brodkin.

As the prankster has become famous, his stunts have depended on increasingly ingenious hair and make-up. In the heat of the hoax, Steven’s nose had started to melt and the game was up for the Rapping Rabbi.

Cowell was ‘pretty furious about it – I thought he’d have more of a sense of humour’, says Brodkin. ‘Maybe there was a big smile waiting to break out and the Botox wouldn’t allow it.’

Other stunts have solicited more serious reprisals. Following his pranking of Donald Trump, Brodkin was targeted by American white supremacist David Duke, former Grand Wizard of the Ku Klux Klan. ‘He outed me as a Jew,’ Brodkin frowns. ‘To be honest, I already knew.

‘The Klan are clowns with ridiculous views but they have lynched and murdered a lot of people in their time. And they will insist on wearing those ludicrous outfits too,’ he sighs. ‘If you’re not going to let the Jews in, the tailoring will suffer.’

He’s joking now, but Brodkin was obviously unnerved by the levels of loathing – several tweets suggested he should be gassed – and looked into employing personal protection.

‘One day we’ll look back on this era and wonder how on earth we allowed so much vile hatred to be directed at someone on account of their faith, colour or sexuality,’ he exhales sadly.

Brodkin, who has riffed on religion throughout his career, recalls hearing a sharp intake of breath from an audience who believed he was telling a poor-taste joke involving Hitler. ‘It’s OK, I’m Jewish,’ he reassured them. ‘My relatives died for that joke.’

Brodkin lives in Hampstead Garden Suburb with Louise, his wife of 12 years, a religious studies teacher. ‘We don’t know if we want kids,’ he deadpans. ‘Unfortunately, we’ve got two.

‘I’m kidding!’ he yells. ‘I love my beautiful children.’

A group of young lads sitting behind us look up and, realising that ‘Lee Nelson’ is at the next table, resurrect his ‘Qualitee!’ catchphrase for the benefit of an unfazed funnyman.

Brodkin is often asked by the public if he gets scared when executing stunts.

‘A strange calmness comes over me, as it does in an emergency, so I’m sure my medical training helped there.

‘Of course, it also helps if you have an over-endowment in the testicular department,’ Brodkin points outs, sipping his vanilla tea. ‘And speaking as a qualified doctor, that is the correct medical terminology!’

‘100% Simon Brodkin’ will be at The Pleasance Baby Grand as part of the Edinburgh Festival Fringe, from July 31 to August 24 at 9.30pm, edfringe.com