Simon Cowell lawyers up after becoming embroiled in racism storm

Simon Cowell has lawyered after he becoming embroiled in a racism row when former America’s Got Talent judge Gabrielle Union claimed she was told that her hairstyle and clothes were ‘too black’.

The 47-year-old actress, who was axed last month, is threatening legal action against British entertainment mogul Cowell’s company Syco, which co-produces the show.

She claims the working environment on AGT, which attracts about 10 million viewers, was ‘toxic’, that Cowell, 60, a fellow judge, was too dominant. She also claimed that talk show host Jay Leno cracked inappropriate jokes when he was a guest.

Union said there was no mechanism for raising her grievances, even though she talked with Cowell during a meeting at his home in Malibu in May.

Cowell has now reportedly hired longtime Hollywood litigator Larry Stein to represent him, according to Variety.

Stein is expected to advise Cowell and participate in a probe regarding complaints of a toxic culture. Variety reported that the complaints included numerous accusations of racial insensitivity and excessive critiques of the female cast.

A source close to Union told The Mail on Sunday: ‘She’s in discussions with Simon’s people and [broadcaster] NBC, but she isn’t prepared to back down. This isn’t going away. Gabrielle kept complaining about Simon’s total autonomy on set.

‘There were no other channels to go through to make a complaint about conditions. She was shocked when she was told that her hair and wardrobe was ‘too black’ and she immediately tried to lodge a complaint, but there wasn’t a place to go.’

The source added: ‘Gabrielle is powerful and wealthy in her own right. She’s not interested in a settlement or having this swept under the rug. This is her #MeToo moment and she’s doing this because she genuinely wants to change an outdated system and wants to make it better for the women who come after her.’ 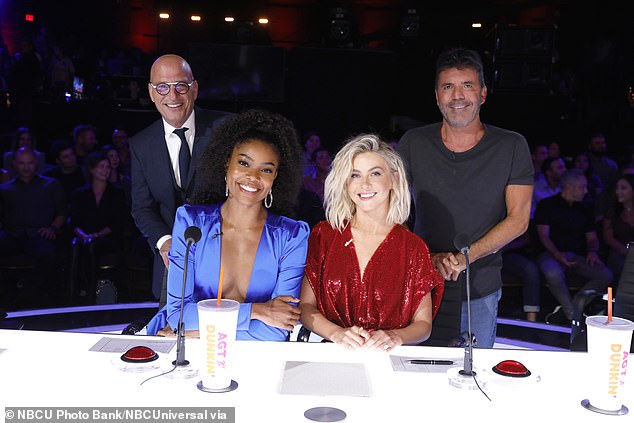 Ms Union claims the working environment on AGT, which attracts about ten million viewers, was ‘toxic’, that Cowell, 60, a fellow judge, was too dominant and that chatshow host Jay Leno cracked inappropriate jokes when he was a guest. She is pictured above with fellow judges Howie Mandel, Julianne Hough, and Simon Cowell

NBC held a five-hour crisis meeting with Union on Tuesday and promised an investigation to ‘get deeper understanding of the facts’.

Cowell was notably absent from the meeting, nor was there a representative from Syco present. It did however include an NBC staffer, Fremantle’s North American COO, Suzaanne Lopez and a third party counselor hired by the network, according to Variety.

A source told the publication that Cowell, who is currently shooting ‘The X-Factor in London’, felt that Fremantle was ‘sufficient to represent the company in the room’.  Another ‘insider’ said that the third party counselor was representing all three companies, and that the investigation will ‘result in many more such meetings across the production’.

According to Deadline, an independent investigator will assess the claims made by Union, who replaced Spice Girl Mel B as a judge this season, joining Cowell, comedian Howie Mandel and dancer Julianne Hough.

In a tweet, the actress – who is married to ex-basketball star Dwyane Wade – wrote: ‘We had a lengthy and what I thought to be, productive meeting yesterday. I was able to, again, express my unfiltered truth.’

Her lawyer, Bryan Freedman, said: ‘We’re waiting to see whether NBC is going to make sure there are real changes made to protect both the contestants and the talent [judges].’

The Screen Actors Guild and American Federation Of Television And Radio Artists are investigating the departure from the show of Ms Union, a campaigner on women’s issues.

In a statement last night, Syco, AGT co-producer Fremantle and NBC said: ‘AGT has a long history of inclusivity and diversity… We are working with Ms Union… to hear more about her concerns, following which we will take whatever next steps may be appropriate.’ 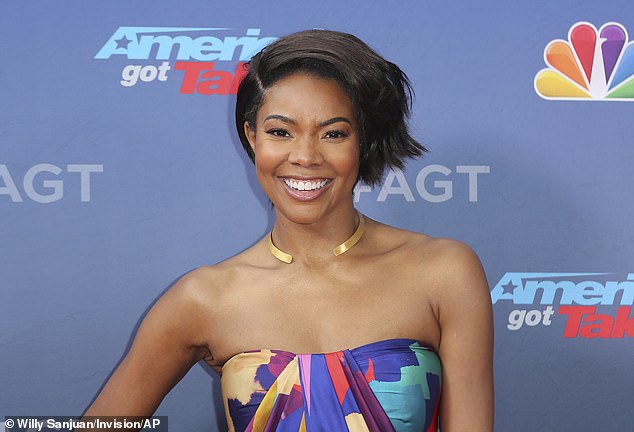 A source close to Ms Union told The Mail on Sunday last night: ‘She’s in discussions with Simon’s people and [broadcaster] NBC, but she isn’t prepared to back down. This isn’t going away. Gabrielle kept complaining about Simon’s total autonomy on set’