Simon Cowell will not be on tonight’s live X Factor

Simon Cowell will miss the first X Factor live show after falling down the stairs and getting a concussion – sparking ‘panic’ among contestants.

The star, 58, was stretchered out of his London mansion to hospital in a neck brace after the accident while going to get a cup of hot milk to help him fall asleep at around 7.30am yesterday.

The presenter looked dazed as he arrived home at around 4pm yesterday looking slightly dishevelled in tracksuit bottoms and trainers – but left his laces trailing risking another fall.

Speaking at his front door he said: ‘I fainted and fell down the stairs. I’ve got a bit of concussion. I feel better now.’ He also thanked fans for their ‘concern’.

The fall came just a day before the first live X-Factor show of the year on Saturday and confirming he may not well enough to appear he said: ‘I will be back but I don’t know about tomorrow’.

His partner Lauren was in New York with their son Eric but is flying back to London to be with him.

A source close to Mr Cowell later told The Sun: ‘There were some rumours that Cheryl was going to step in for Simon but this isn’t going to be the case.

‘Simon is expected to be fine for Sunday’s show, but right now he needs as much rest as possible – every one knows he’s a workaholic and no one can stop him from returning.

‘They’ll switch the singers which means they’ll be panic for some contestants but everyone totally understands.’ 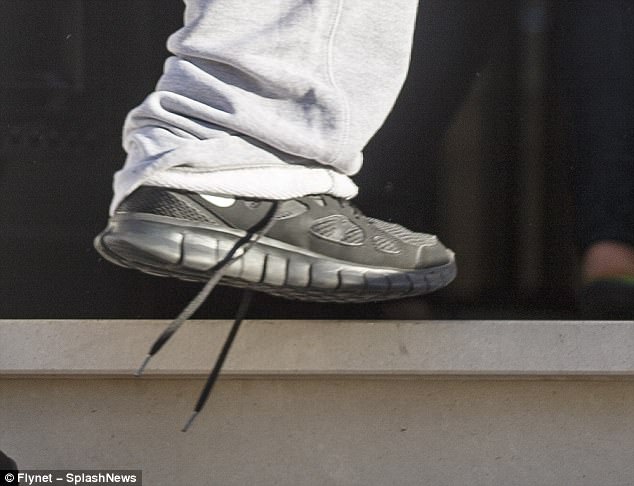 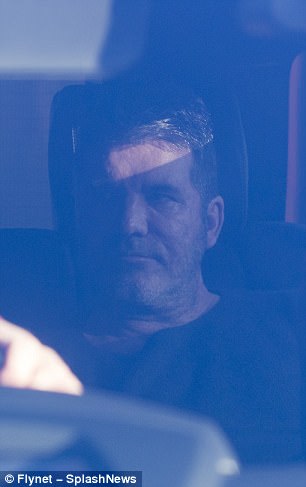 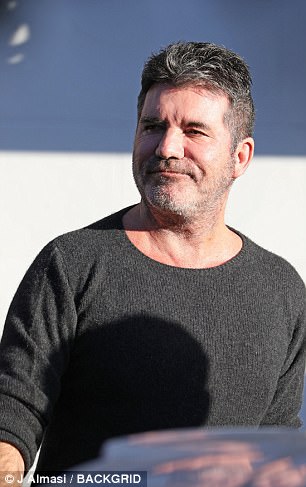 The X-Factor star is believed to have been going to the kitchen to get a hot drink when he fainted before clattering down the stairs.

The cause of his collapse is not yet known but in 2012 he reportedly told friends that running the X-Factor and his other TV talent show in the UK and America had left him with nervous exhaustion and living ‘like a weird vampire’ because of his globetrotting.

Representatives for Cowell and The X Factor have been asked to comment.

London Ambulance Service told MailOnline they couldn’t comment on cases ‘where patients could be identified’. 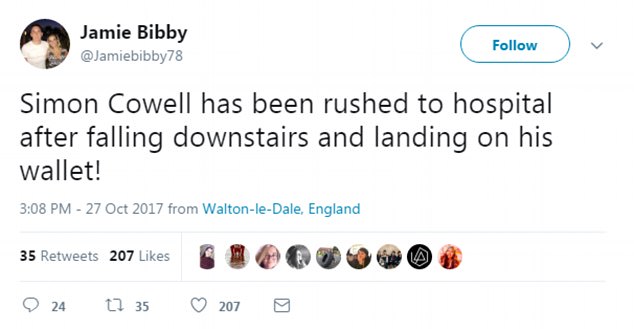 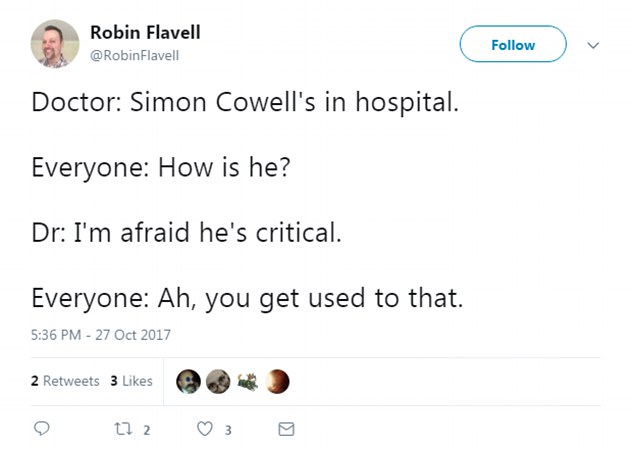 In July Simon missed part of the live auditions for his ITV talent show after being left in bed by a mystery illness.

Last June his partner Lauren was forced to step in as host at his own fundraising event in London because he was struck down with the flu.

In 2012 he collapsed from nervous exhaustion this summer after his workaholic lifestyle got the better of him. 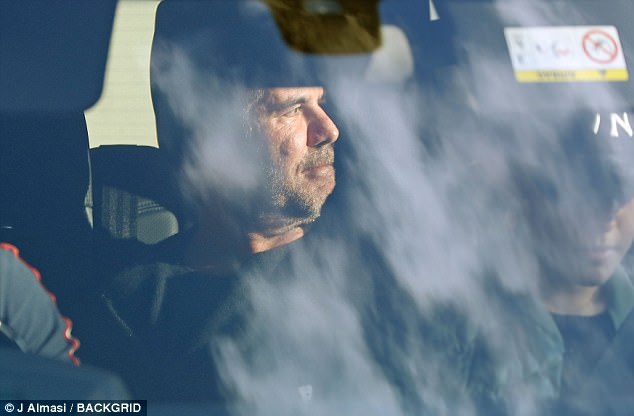 The star was bedridden for weeks after doctors told him to rest, according to his updated biography.

It claimed the then 52-year-old admitted he was ‘paralysed with tiredness’ and his ‘immune system was failing’ because of his job.

In an updated version of his book Sweet Revenge: The Intimate Life Of Simon Cowell, biographer Tom Bower claims that the star had to halt filming of the US show as he began acting like a ‘weird vampire’, working through the night. 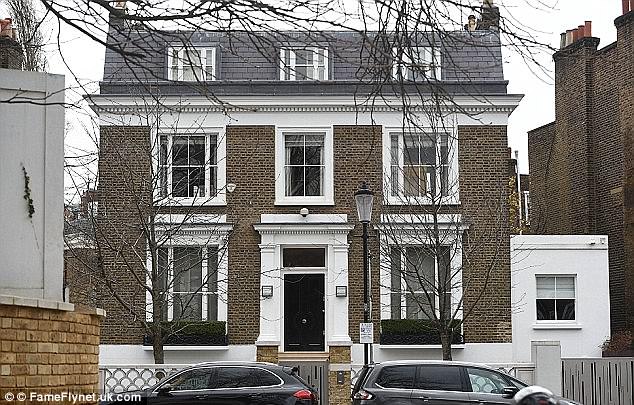 The X-Factor star, 58, was taken away from his London mansion (pictured) by ambulance 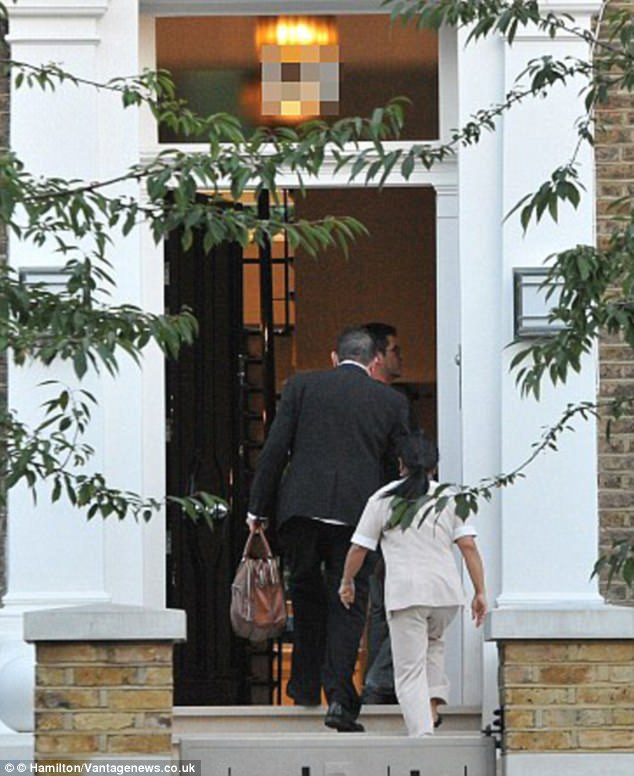 Mr Cowell, who is due on live TV tomorrow night, may have slipped or fainted before clattering down the stairs (shown partially through the doorway in file photo) 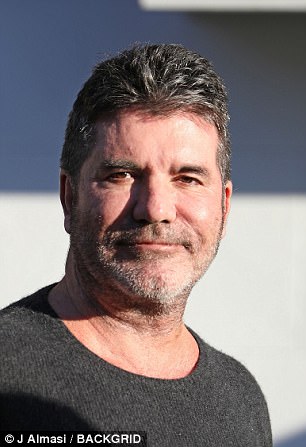 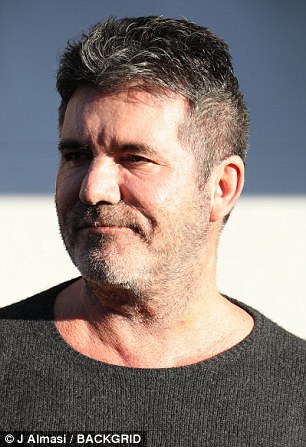 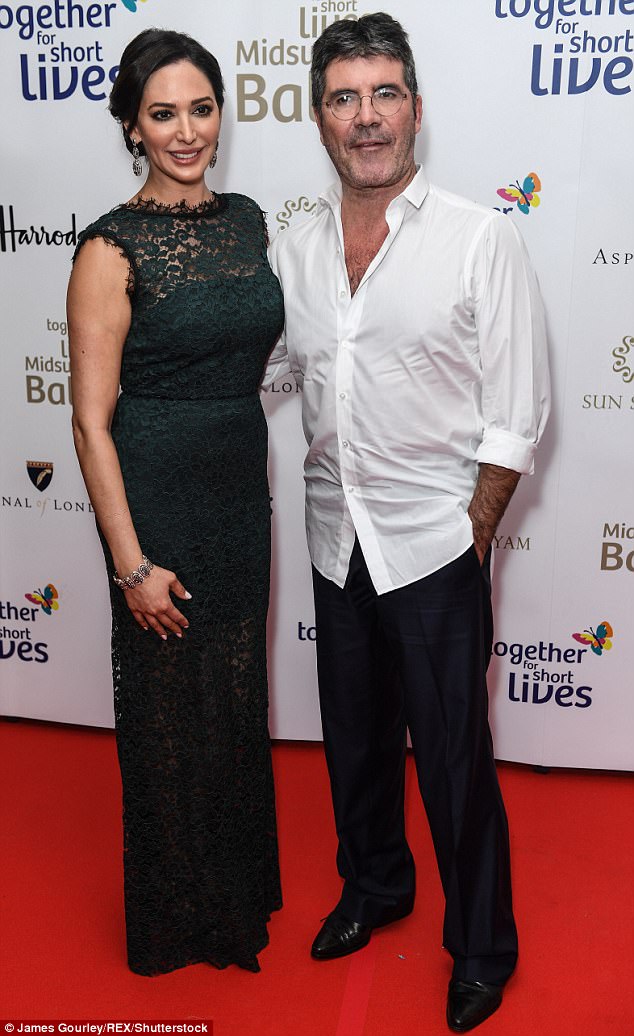 Doctors warned him to give up smoking, stop taking health supplements and give his body a break.

Cowell is claimed to have confided in X Factor judge Louis Walsh: ‘I desperately need peace. I’m craving normality. I’ve got to work out my demons and come out of it.

‘I have to get back to where I was years ago. I have to stop reading texts at three in the morning and making calls later and later.’

DID LOW BLOOD PRESSURE CAUSE SIMON COWELL TO FAINT?

Although no official explanation has been given for media mogul Simon Cowell fainting, it is believed low blood pressure could be the cause.

According to medical guidance, Cowell, 58, may have orthostatic hypotension.

This occurs when blood flow to the brain is interrupted as a result of a drop in blood pressure, normally seen after patients stand up. It tends to affect older people.

However, other explanations for Cowell’s fainting episode, which resulted in him needing a neck brace, could be sneezing, laughing or even coughing.

All of these activities interrupt blood flow to the brain.

Other triggers that can interrupt the blood flow include emotional stress, pain or prolonged standing.

Some blood pressure-lowering drugs are also a culprit, as they make the heart prone to beating slower – which decreases blood flow to the brain.

It can be particularly dangerous, as some can fall and hurt themselves, such as Cowell who states he developed concussion.

His enforced spell of rest meant he missed key promotional time with The X Factor’s then US line-up, which included Britney Spears.

In 2015 Simon was left with a black eye after he was headbutted by one of his acts.

He was almost knocked out by Anton Stephans when the exuberant singer planted a smacker on his lips upon discovering he was through to next week.

The painful kiss saw him in shock, clutching his nose in pain and looking utterly baffled by what had just occurred. Afterwards he was seen holding an ice pack to his face. 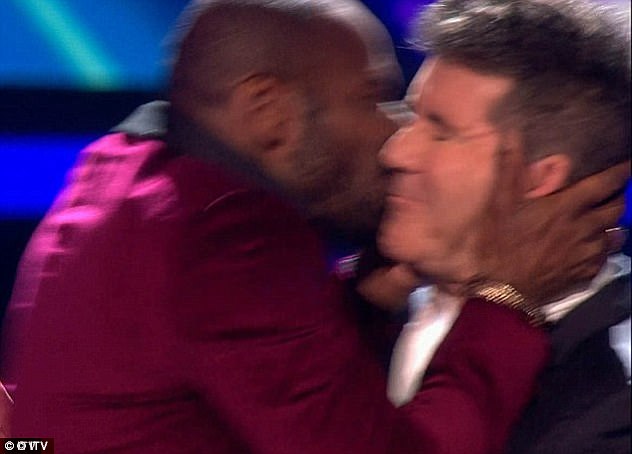 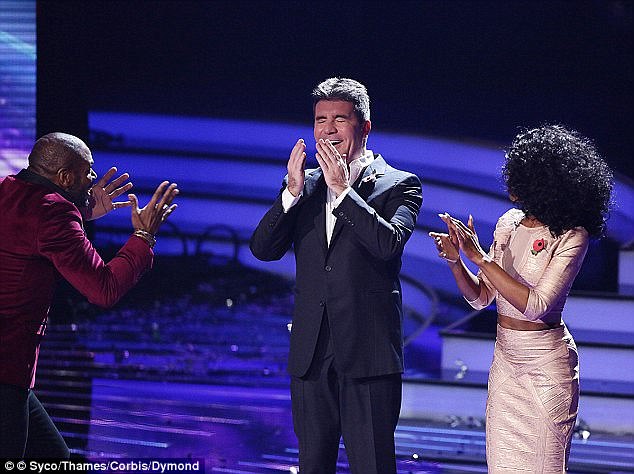 ‘Panic’: X Factor bosses were holding emergency meetings on Friday over the fate of the series first live show after head judge Simon Cowell was injured in a nasty fall

X Factor bosses were holding emergency meetings on Friday over the fate of the series first live show after head judge Simon Cowell was injured in a nasty fall.

The music mogul, 58, was seen being stretchered out of his mansion in a neck brace after he took a fall at around 6.45am while going to get a cup of hot milk.

After undergoing tests at hospital, the millionaire returned home and gave fans a thumbs up – but executives are said to be ‘in a huge panic’.

The insider exclusively tells MailOnline: ‘ITV are in a huge panic as it’s the live shows.

‘There’s has been no decision made yet about whether Simon will appear for filming.

However, a source claims that Simon is determined to appear despite being in pain.

‘It’s bad but he’s ok. It’s not a serious injury. He won’t want anyone else taking his place on the panel.’

However, the accident threw producers into a panic, with some execs not even knowing about the incident until the afternoon.

Meetings are underway to decide how the first live show of the year – one of the TV series’ biggest nights – should play out, or whether it should go ahead at all.

Simon was due to take his seat on the panel alongside fellow judges Nicole Scherzinger, Sharon Osbourne, and Louis Walsh.

Simon was due to oversee his groups’ rehearsals on Friday, with his acts Rak-Su, The Cutkelvins and Sean & Conor Price.

The X Factor: Final 12 look concerned as they head to rehearsals for first live show following news Simon Cowell has been rushed to hospital after fall

The X Factor is set to air its first live show of the year on Saturday, but the show has been thrown into chaos following news Simon Cowell has been rushed to hospital.

The music mogul, 58, was stretchered out of his house in a neck brace after falling down the stairs at his London home early this morning.

While it’s believed his injuries aren’t serious, it hasn’t been confirmed whether Simon will still appear on the judging panel, but proving the show must go on, its final 12 contestants were seen being ferried to rehearsals on Friday afternoon. 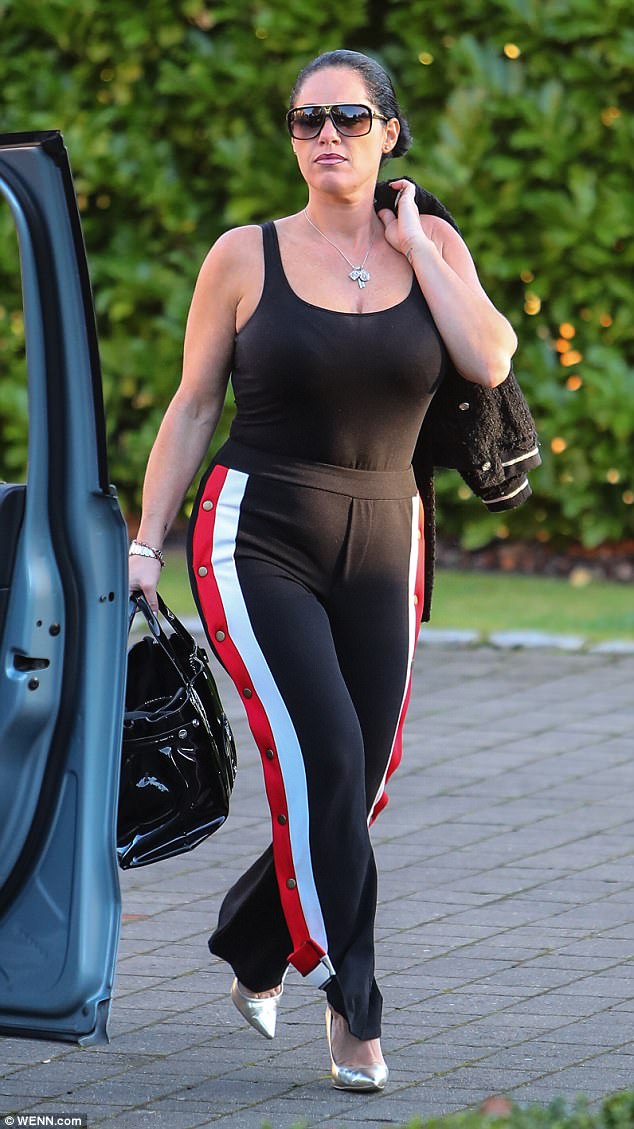 Worried: The final 12 X Factor contestants were seen looking concerned as they headed to rehearsals on Friday afternoon, following news Simon Cowell had been rushed to hospital

Seeming concerned about head judge Simon following his accident, the group appeared downcast, as they made their way out of the shared the home the contestants are currently living in.

Traceyleanne Jefford was seen heading into a waiting car clad in striped flared trousers and a plain black vest top. Her raven-haired locks were pinned back into a sleek bun that sat behind her head, and she covered up in a chic pair of large shades.

The vocal talent is mentored by Nicole Scherzinger on the show and joins Kevin Davy White and Matt Linnen in the former Pussycat Doll’s final three. 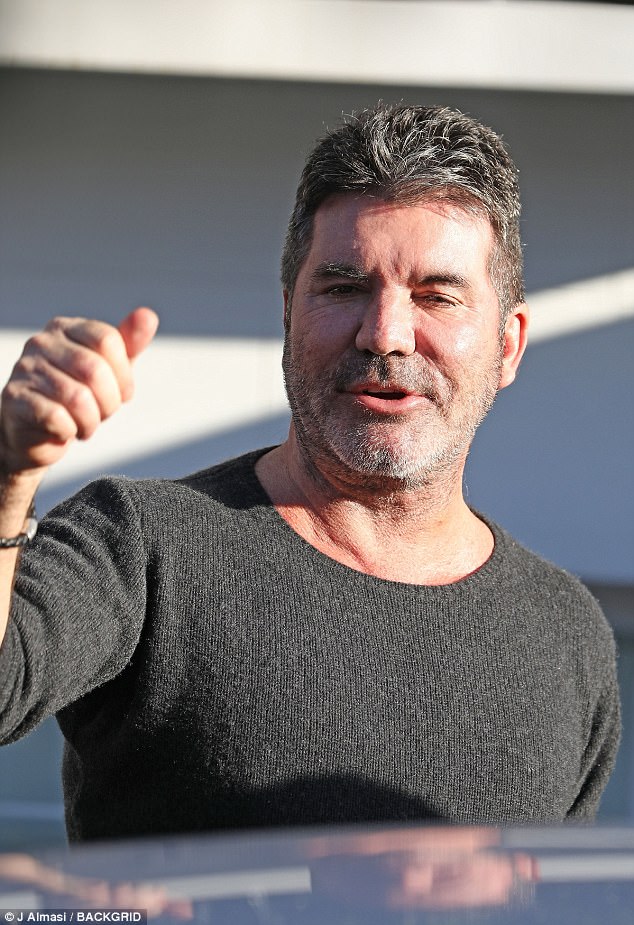 Shock: The music mogul, 58, was stretchered out of his house in a neck brace after falling down the stairs at his London home early this morning – it’s believed his injuries aren’t serious 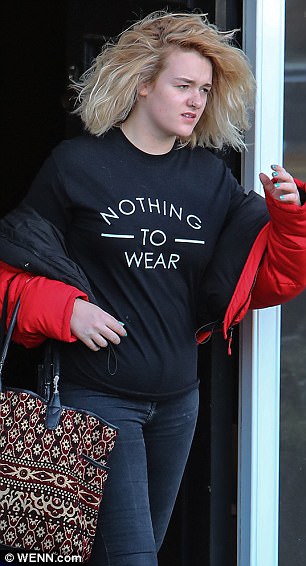 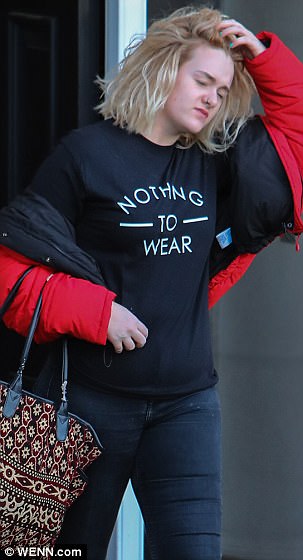 Final preparations: She was joined by Grace Davies, who has been wowing the judges and viewers with her original songs and distinct voice throughout the competition 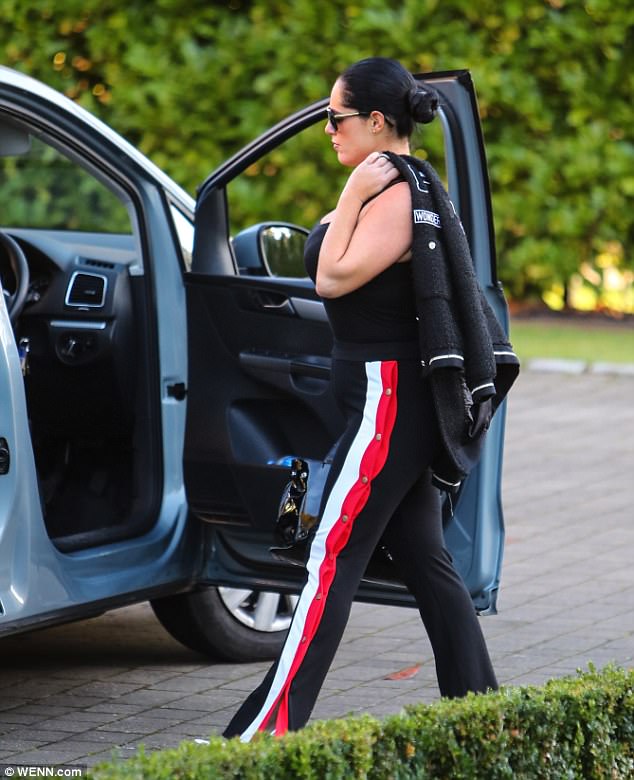 Stylish: Her raven-haired locks were pinned back into a sleek bun that sat behind her head 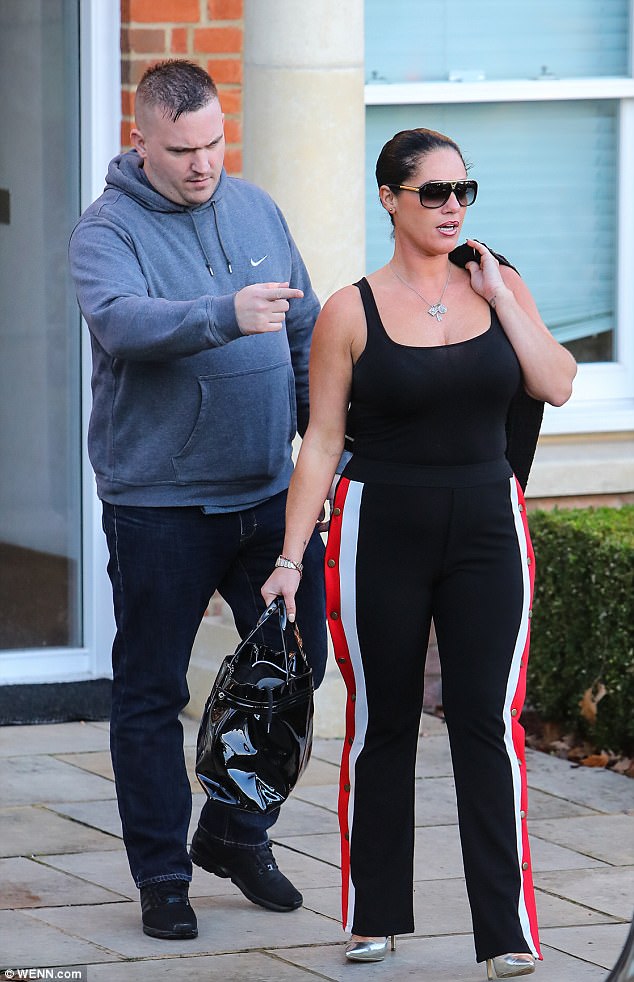 Show success: The vocal talent is mentored by Nicole Scherzinger on the show and joins Kevin Davy White and Matt Linnen in the former Pussycat Doll’s final three

She was joined by Grace Davies, who has been wowing the judges and viewers with her original songs and distinct voice throughout the competition. Clad in a black sweatshirt with the slogan ‘Nothing To Wear’ emblazoned across the front, Grace appeared to go make-up free ahead of rehearsals.

The teen joins Holly Tandy and Rai-Elle Williams in the girls category mentored by Sharon Osbourne.

Holly closely followed Grace in a dark green dress and fur coat, while Rai-Elle favoured a pair of leather-look leggings and a black baseball cap. 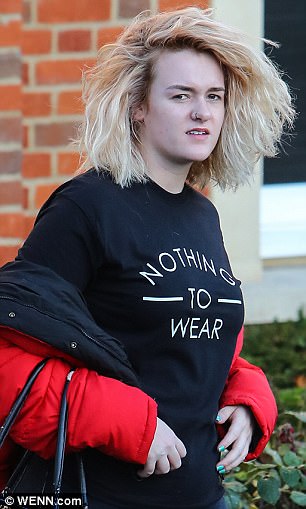 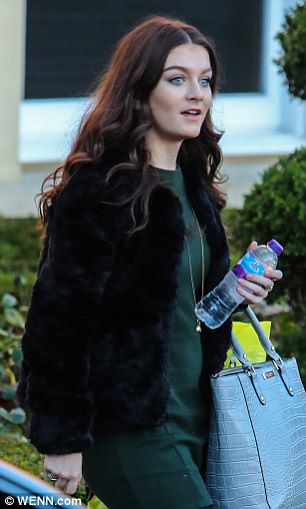 Show must go on: Teen Grace (L) was joined by fellow hopeful Holly Tandy (R), as they headed to rehearsals together 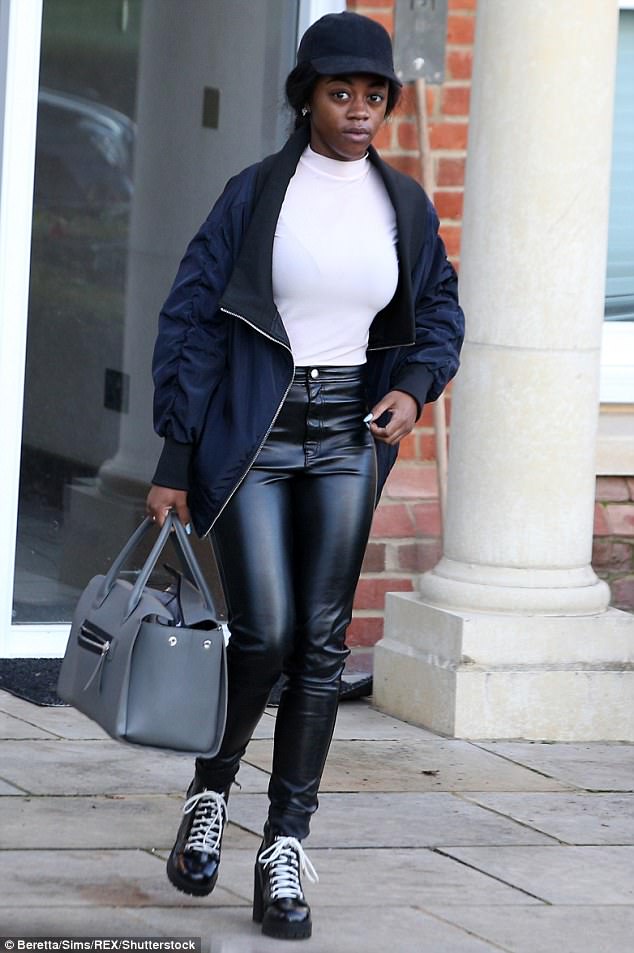 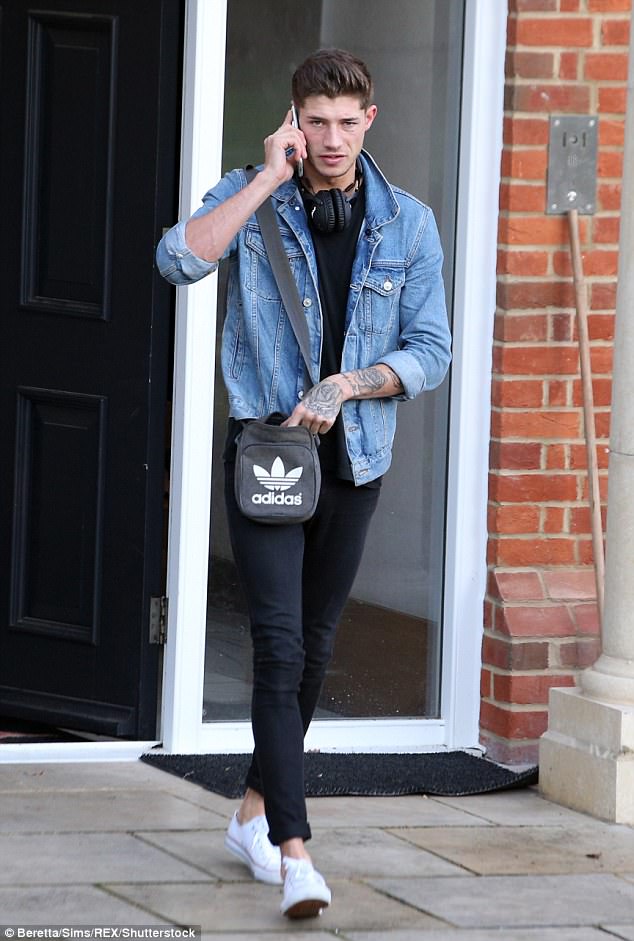 Last minute advice? Sam Black was seen speaking on the phone after being reinstated into the competition following the departure of Anthony Russell

Others filtering out of the lavish mansion included crooner Sam Black, who found himself reinstated into the competition following Anthony Russell’s departure. He had won over Louis Walsh at Judges’ Houses and joins Lloyd Macey and Spencer Sutherland in the live shows.

Members of group Rak-Su were also pictured, along with Shereen Cutkelvin from family band The Cutkelvins. The groups, including brotherly duo Sean & Conor Price, are being mentored this year by Simon, but will be forced to go without his expertise as they make the final preparations for their performances.

A slew of acts, who had their faces covered by blankets to avoid being seen, were also heading out of the property. They were no doubt the show’s wildcard acts that have now been revealed to be Leon Mallet, Alisah Bonaobra, singing duo Jack and Joel and Talia Dean.

Rehearsals for the first X Factor live show still appeared to be going ahead, despite news Simon is in hospital undergoing tests.

Concerned: Members of group Rak-Su were also pictured heading out of the lavish mansion where all the contestants are currently staying 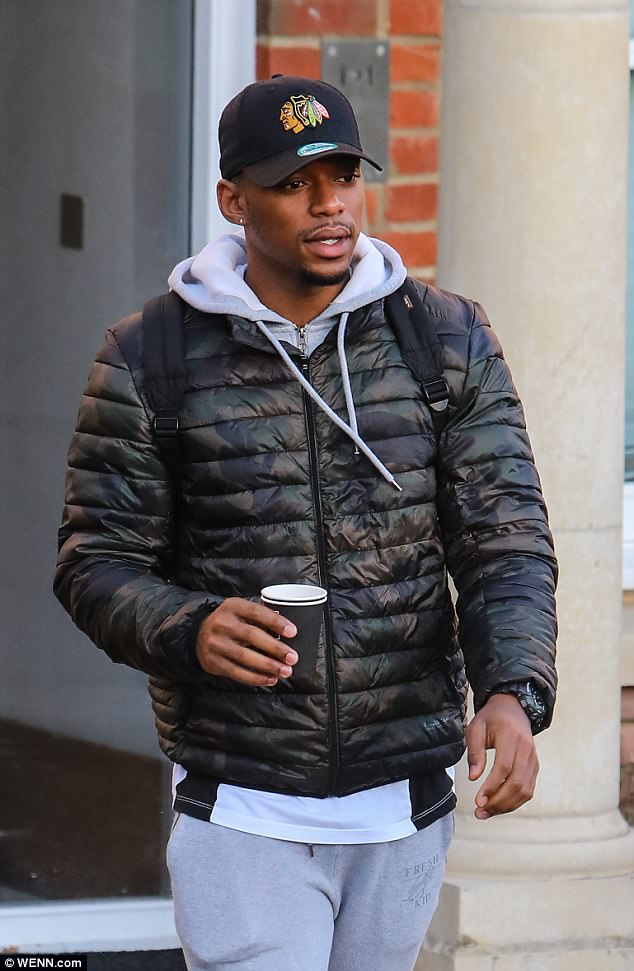 Drama: The groups are mentored by Simon, but will be forced to go without his final bout of expertise just 24 hours before the first live show 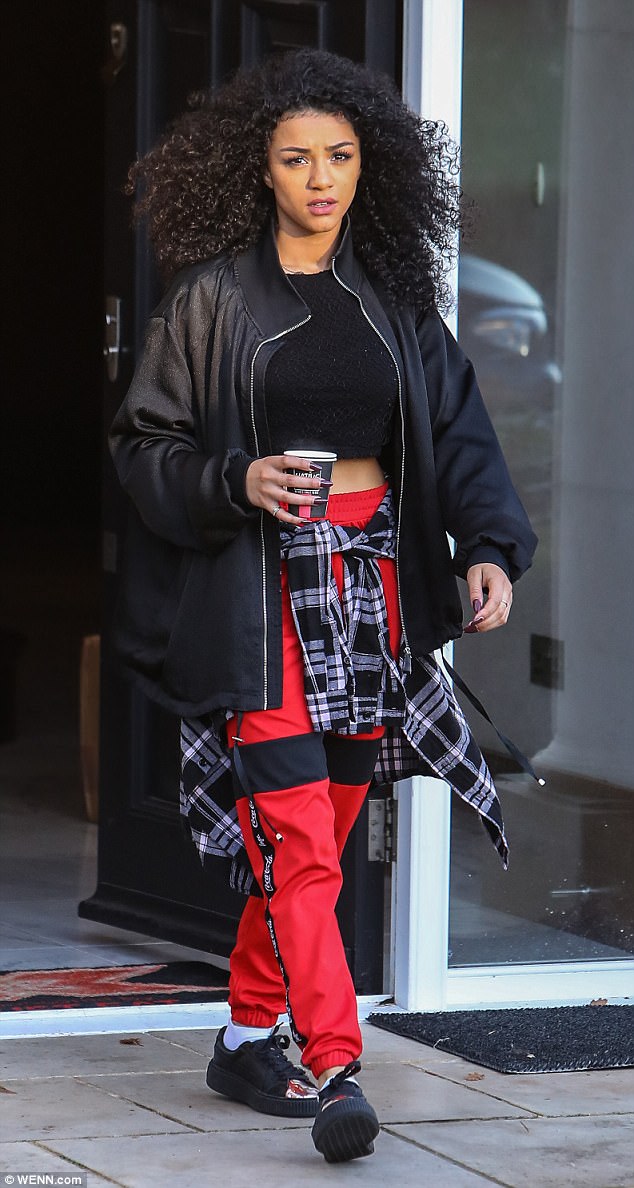 Chic: Shereen Cutkelvin cut a chic figure in an edgy ensemble that paired together red tracksuit trousers and a black crop top 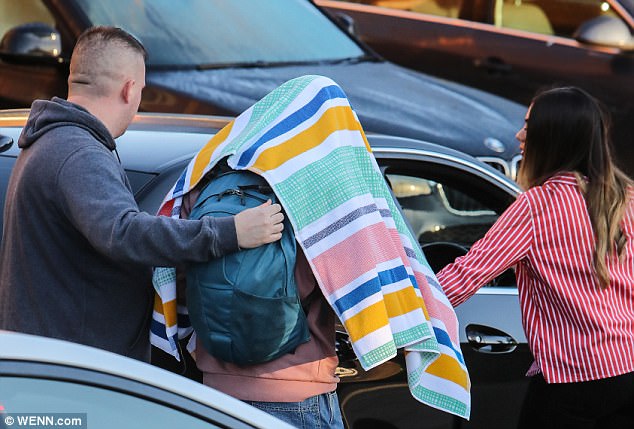 Surprise: Some of the acts had their faces covered by a blanket to keep their identity concealed 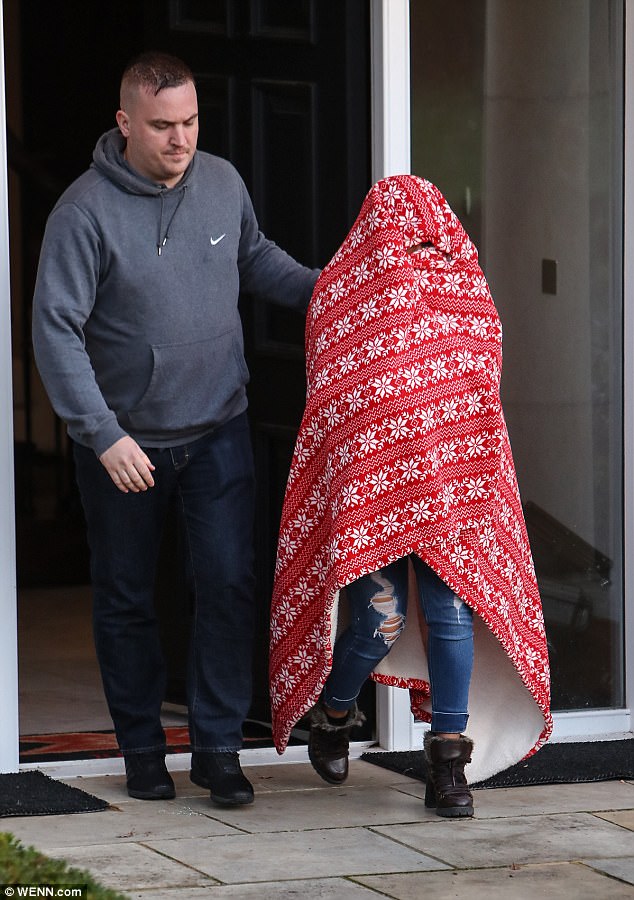 Second shot: They were no doubt the show’s wildcard acts that have been chosen by the judges to join the final 12 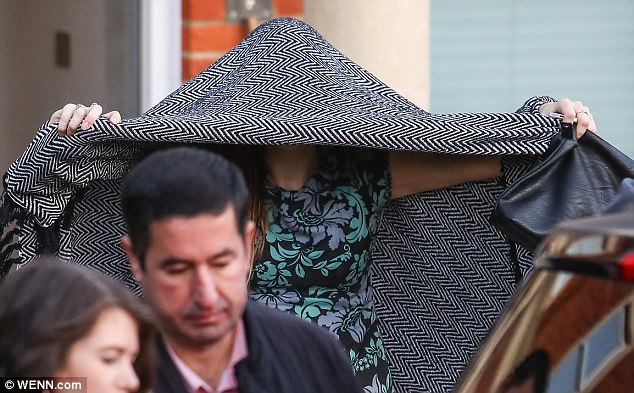 It’s already been revealed that those re-joining The X Factor are Leon Mallet, Alisah Bonaobra, singing duo Jack and Joel and Talia Dean.