The central London offices were put on lockdown early yesterday afternoon, leaving staff, including Mayo, Ken Bruce and Anneka Rice, unable to go in and out of the building.

Mayo was stuck inside Wogan House – named after the late Sir Terry Wogan – which is home to Radio 2 and Radio 6 Music. 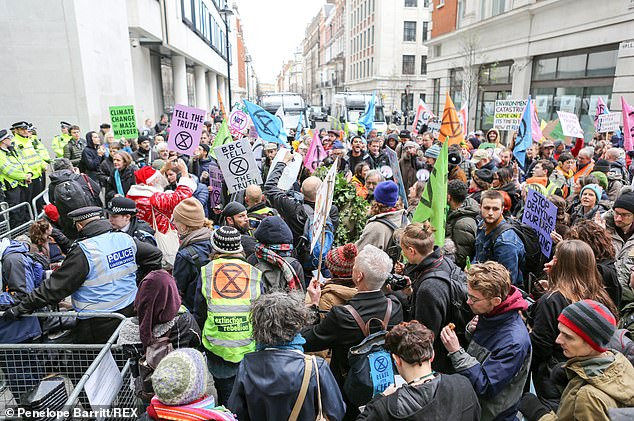 The Extinction Rebellion group, who blocked five London bridges in a demo last month, staged a series of protests at BBC sites around the country yesterday.

It is demanding that the BBC uses its position to declare a ‘climate and ecological emergency’. 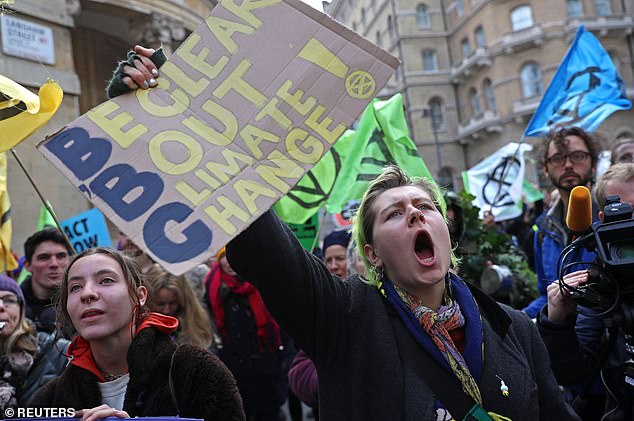 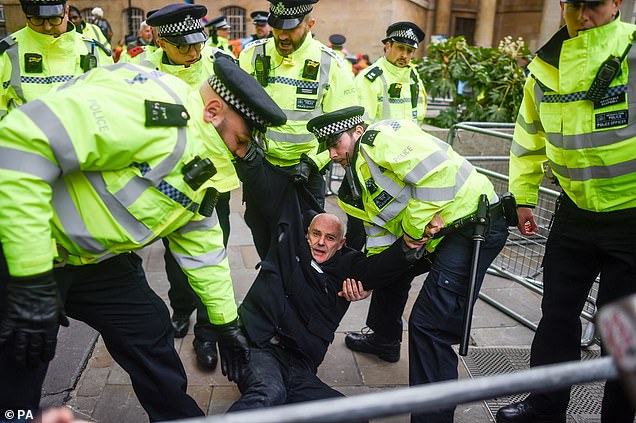 A protester is held during a Extinction Rebellion protest outside the BBC’s Broadcasting House in London, during a protest against the way the BBC covers the ‘climate emergency’

Mayo, 60, who has hosted the drivetime slot since 2010, wrote on Twitter: ‘Due to a demo outside the BBC, I’ve been told I can’t actually leave Wogan House. Ironically.’

The group urged the BBC to make the climate emergency its top editorial and corporate priority, divest investments from fossil fuel corporations, and to become zero carbon by 2025.

A BBC spokesman said: ‘We’ve received a letter from this newly-formed campaign group. The BBC has a proud record of leading the way in sustainability in the media industry and we’ve set out further action including cutting energy use further, eradicating single use plastic and minimising the impact of necessary travel. 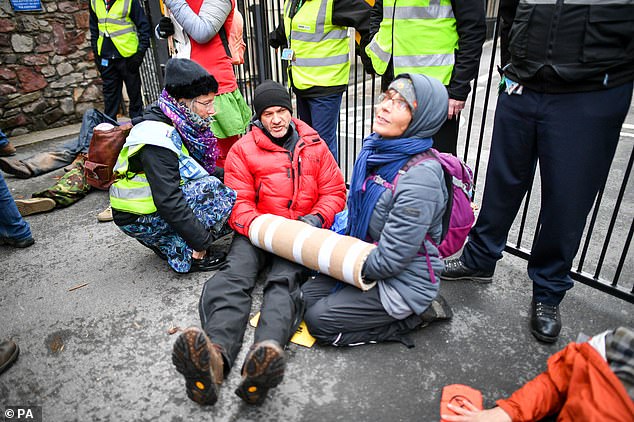 Climate change activists from Extinction Rebellion chain themselves together outside the BBC Bristol building on Whiteladies Road, Clifton, Bristol, during a peaceful protest 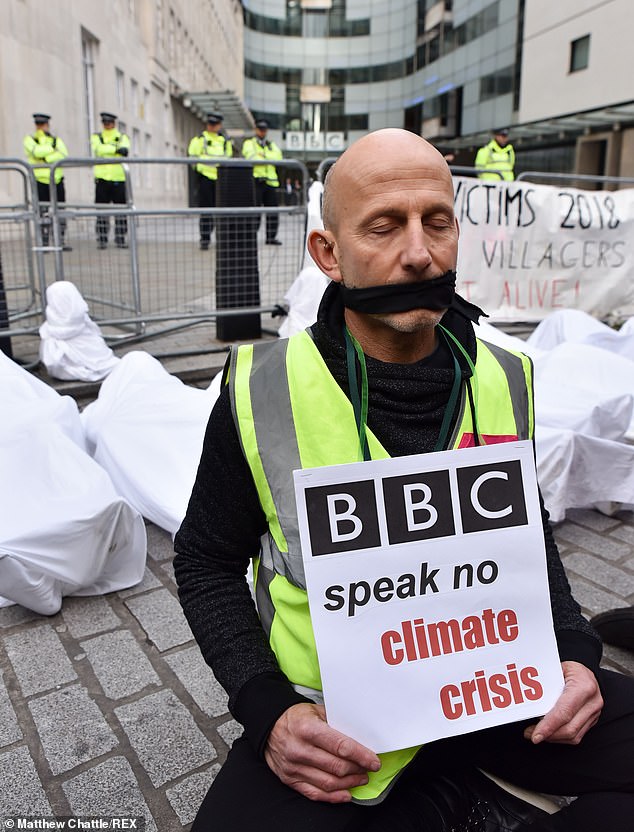 A climate change protester outside of BBC London with black tape over his mouth. He was part of a group of activists urging the BBC to make climate change it’s top issue

In the last Charter period, we reduced our carbon footprint by a third. People can also see the clear impact programmes like Blue Planet II and Dynasties have had on public debate about the impact of humankind on the planet.’

Serena Schellenberg of Extinction Rebellion said: ‘Now more than at any time in its history, we need the BBC to honour its founding value to be ”independent, impartial and honest”.

‘We’re facing a potentially existential threat to both our nation and our species, but the BBC’s coverage is nowhere close to reflecting this. 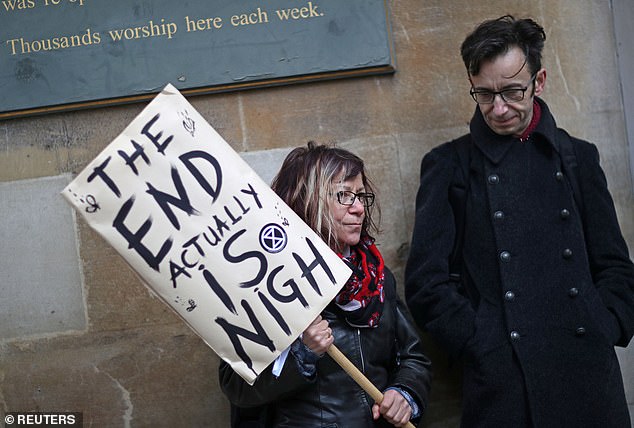 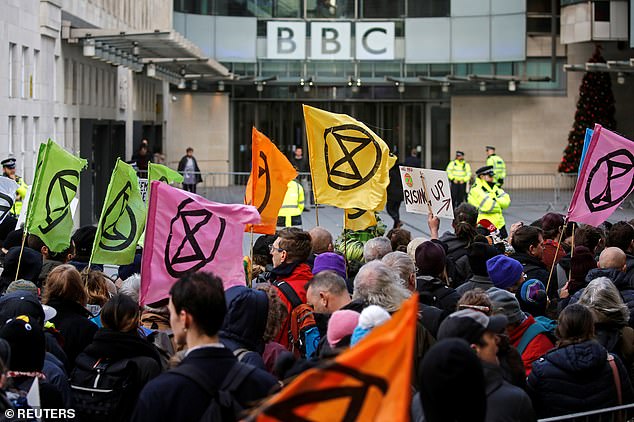 The group was armed with pots, pans and songsheets and aimed to make as much noise as possible before falling silent to listen to speeches, music and poetry

‘We’re sure that many of those working within the BBC agree with us on this, and that many more are willing to listen – so we’re coming with music and noise not as antagonists, but as friends looking to implore this organisation to shift its policy and play a vital role in facing up to the ecological crisis.’

The group has held a series of protests in recent weeks.

Speaking to Mail Online, a spokeswoman said: ‘We want to bring the climate emergency up to the top of the agenda in the media.’ 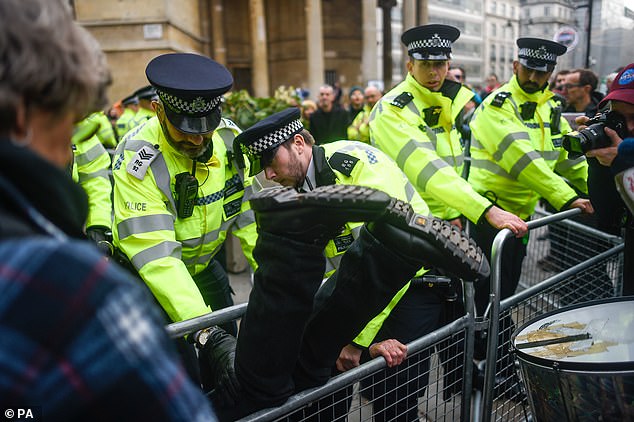 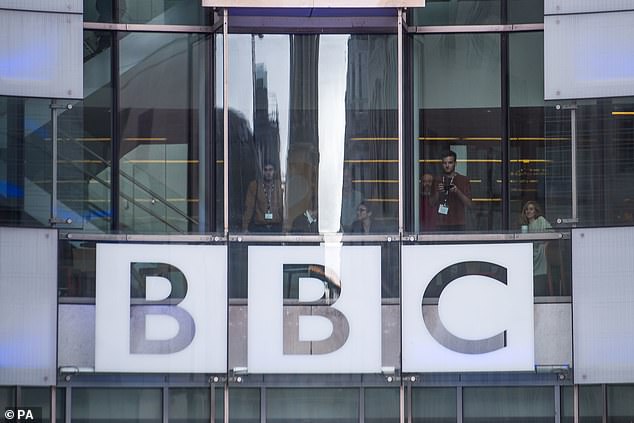 The protests come just days after flights at Gatwick airport were grounded by a drone, believe to be a operated by an eco-warrior.

However, the spokeswoman denied that her group had anything to do with the drone. She added that the police had not been in contact with them about the incident at Gatwick.

The group added that the BBC is a respected media voice in the UK and so need to play a key role in ‘enabling the transformative change needed’.

In London, protesters met on the steps of All Souls Church in Marylebone before descending onto BBC London.

They were armed with pots, pans and songsheets and aimed to make as much noise as possible before falling silent to listen to speeches, music and poetry.

1. The director general, Tony Hall, agree to a meeting with a delegation from Extinction Rebellion to discuss how the BBC can tell the full truth on the climate and ecological emergency.

2. The BBC declares a climate and ecological emergency.

3. The BBC places the climate emergency as its top editorial and corporate priority by adoption of a climate emergency strategic plan, at the level of urgency placed on informing the public about the second world war.

4. The BBC to divest all pension funds, investments and bank accounts from fossil fuel corporations and their bankers.

5. The BBC, its subsidiaries and its supply chain to agree to be zero-carbon by 2025.

6. The BBC to publish an annual eco-audit of all BBC operations, including summary of key ecological and carbon data.

7. The BBC to take a lead on encouraging other national and global media corporations to join the global efforts to save humanity/nature from existential crises.

8. The BBC to only allow thinktank spokespersons on air to discuss the climate emergency whose funding is fully transparent.

The group warned on its website that there is a ‘possibility of some more disruptive civil disobedience’.

They also held services to honour the 27 people found burnt alive in the Greek village of Mati after July’s wildfires, and the ‘315,000 people the UN estimates are already dying every year from the unfolding climate emergency’.

In Bristol, rebels met at Clifton Down Railway Station at 9.30am before moving in on the BBC office on Whiteladies Road for a Christmas party with the theme ‘all I want for Christmas is the truth’.

Climate change activists chained themselves together outside the BBC Bristol building during the protest.

The event in Glasgow was less disruptive with more of a family-friendly focus. The group hosted children’s activities and a mass-delivery of Christmas cards to the BBC branch alongside noise-making, singing and speeches.

In Cambridge, rebels requested an interview at their local studio and then gathered at 7am to either show gratitude or ‘non-violent discontent’, depending on the BBC’s response.

Rebels in Birmingham gathered at midday with pots, pans and ‘XR-rated’ carols.

Meanwhile in Cornwall, members of the group called up Lawrence Reed’s radio show between 12pm and 3pm to to discuss the climate crisis. Others appeared outside the BBC radio office in Truro.

In Sheffield, rebels met at 8am outside BBC Radio Sheffield with pots, pans and songs.

And the protests are even planned to reach Berlin at the BBC’s branch on Schiffbauerdamm, starting at 10am UK time, where protesters will read out a ‘list of some victims of the current mass-extinction’, and hear the accounts of students who have taken part in recent strikes. 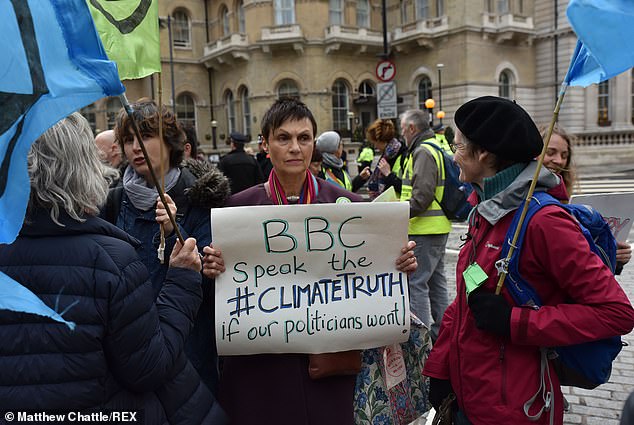 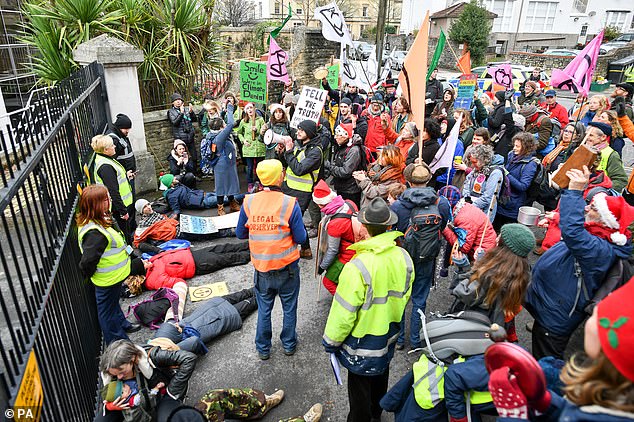 Speaking about its London protests, the group warned on its website that there is a ‘possibility of some more disruptive civil disobedience’ 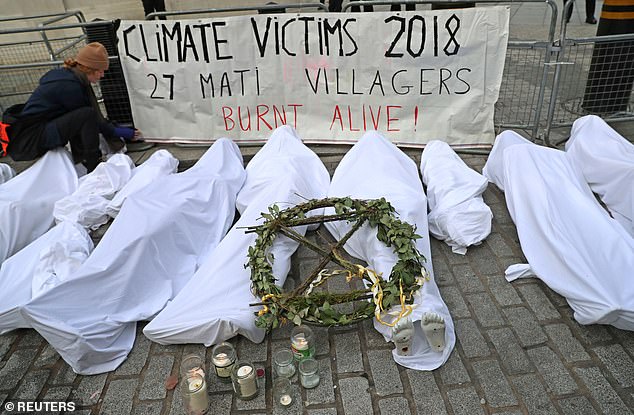 In London, the group also held a service to honour the 27 people found burnt alive in the Greek village of Mati after July’s wildfires 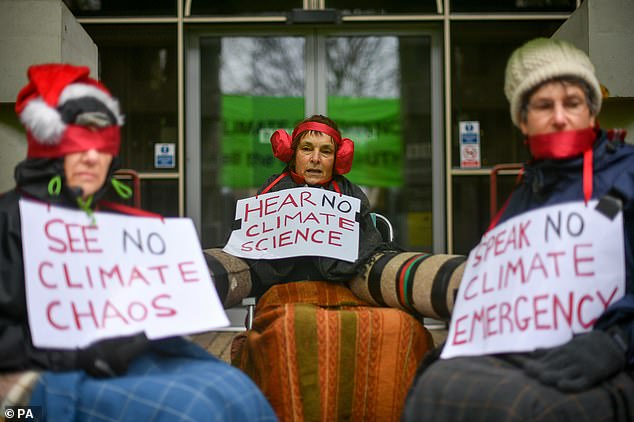 Climate change activists from Extinction Rebellion chain themselves together outside the BBC Bristol building on Whiteladies Road, Clifton, Bristol 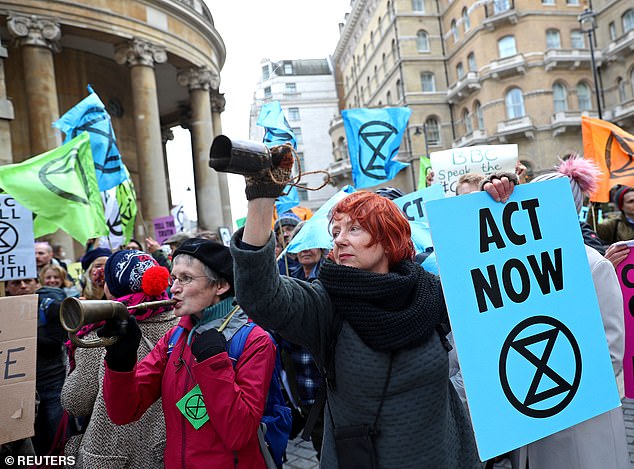 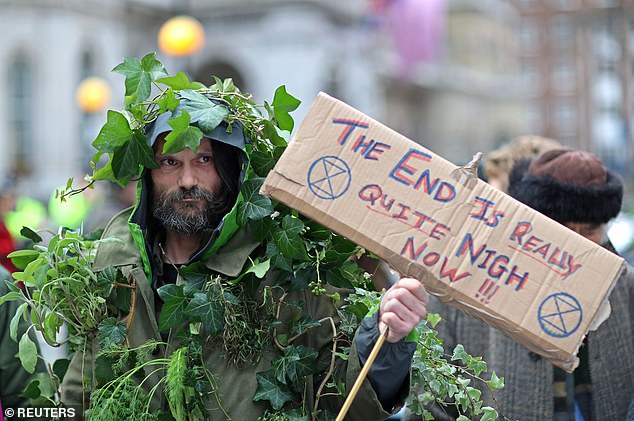 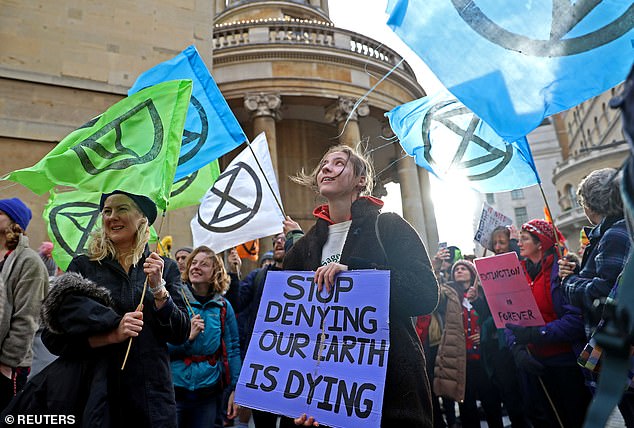 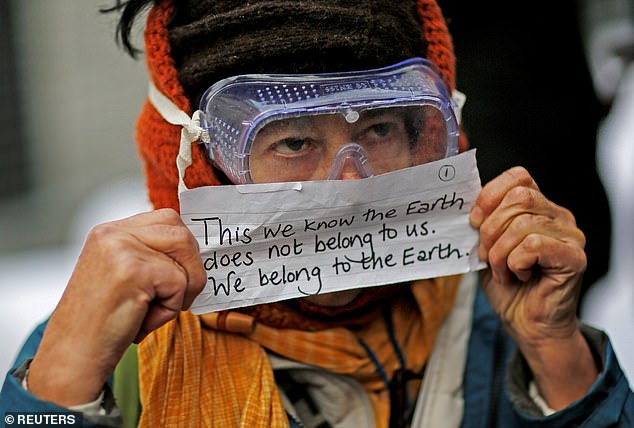 Many protesters held up signs bearing slogans. This protester said that ‘we belong to the Earth’ and ‘the Earth does not belong to us’

Jonathan Fuller, due to be speaking at the event in London, said: ‘In September the UN Secretary General appealed to news outlets to cover his upcoming speech on climate change and on 10 September he delivered it, warning that we now face ‘a direct existential threat’ and warned of ”runaway climate change”.

‘The BBC refused to cover this on TV or radio news.

‘Following a string of stinging complaints the BBC has given some ground and promised to improve its coverage of news but it still refuses to allow the public to hear the really frightening material in connection with the various climate feedbacks and tipping points.’