Widowed Sky Sports presenter Simon Thomas has revealed he is not ready to go back to work after the death of his wife left him an ’emotional wreck’.

And he said his grief at losing Gemma, who died aged just 40 from Leukemia in November, has even left him with memory loss.

Simon, 45, is now a single father to eight-year-old Ethan and has been sharing regular updates on his life on social media.

He posted a message on Twitter thanking fans for their support, but one of the replies was from a man describing himself as a careers adviser who told Simon he should go back to work.

Sky Sports presenter Simon Thomas has revealed he is too heartbroken to return to work following the death of his wife, Gemma (pictured) 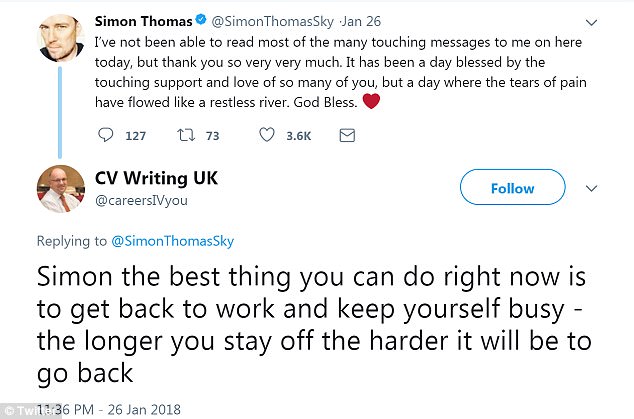 Simon, who shares regular updates on social media, thanked fans for their support since Gemma’s death but one of the replies advised him to go back to work 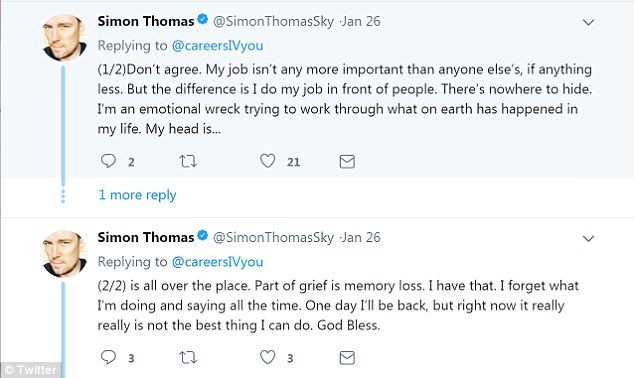 But, Simon responded revealing Gemma’s death has left him an ’emotional wreck’ and the pain of her loss has even left him with memory loss

But, revealing his continuing heartbreak at Gemma’s death, Simon responded: ‘Don’t agree. My job isn’t any more important than anyone else’s, if anything less.

‘But the difference is I do my job in front of people. There’s nowhere to hide. I’m an emotional wreck trying to work through what on earth has happened in my life.

‘My head is all over the place. Part of grief is memory loss. I have that. I forget what I’m doing and saying all the time. One day I’ll be back, but right now it really really is not the best thing I can do.

And on Sunday morning, the TV star posted a heartbreaking note to Instagram, given to him by his wife on their 10th wedding anniversary.

It said: ‘Found this card from Gemma during another sleepless night of finding things to do to pass the time.

‘Her words are so painfully poignant- “Some horrible lows but happy happy highs and we’ve made it through in one piece.”

‘We went through some very tough times that many of you won’t know about and some of you will. But we made it through and were so much stronger as a couple as a result. 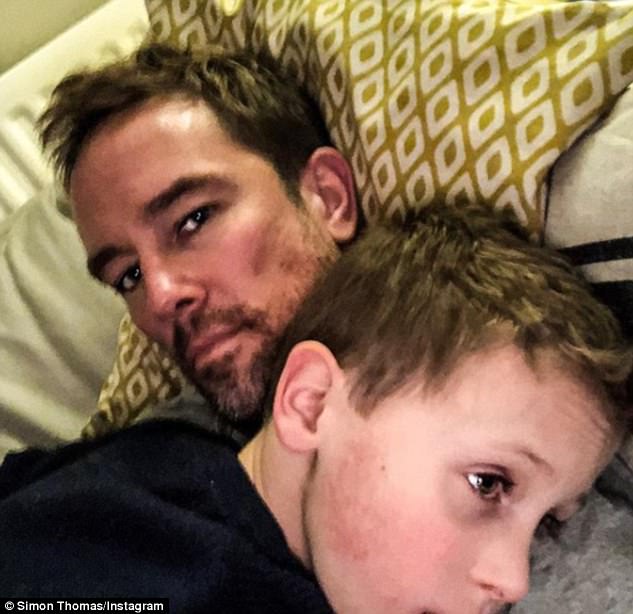 Simon often posts pictures of himself and Ethan on Instagram. He captioned this: ‘My world’ 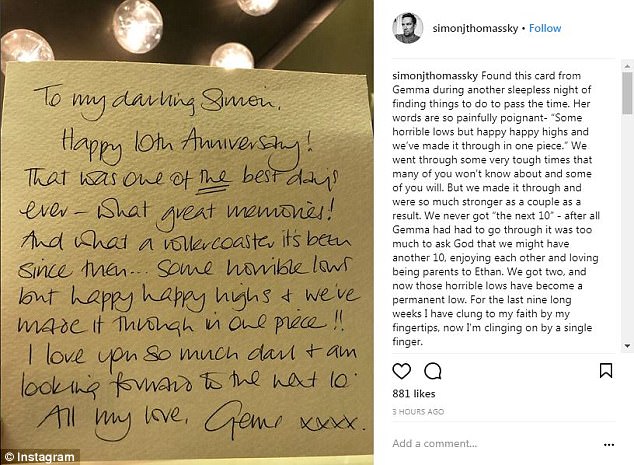 This morning, devastated Simon posted this heartbreaking note to Instagram. It was given to him by his wife on their 10th wedding anniversary

‘We never got “the next 10” – after all Gemma had had to go through it was too much to ask God that we might have another 10, enjoying each other and loving being parents to Ethan.

‘We got two, and now those horrible lows have become a permanent low. For the last nine long weeks I have clung to my faith by my fingertips, now I’m clinging on by a single finger.’

Gemma had flu-like symptoms and went to see the doctor three times over the course of six days in November, before she was finally admitted to hospital when her condition continued to deteriorate.

The mother-of-one was suffering from a highly aggressive form of acute myeloid leukemia and tragically died four days after her final trip to the GP. 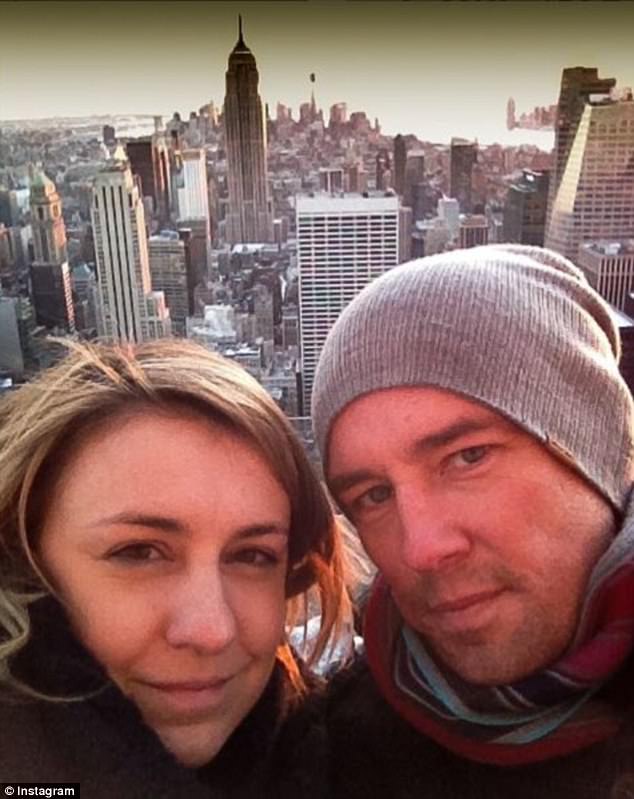 Before his 45th birthday on Friday, Simon said his first birthday without his wife Gemma, pictured, will be the ‘unhappiest of days’ in a heart-wrenching note 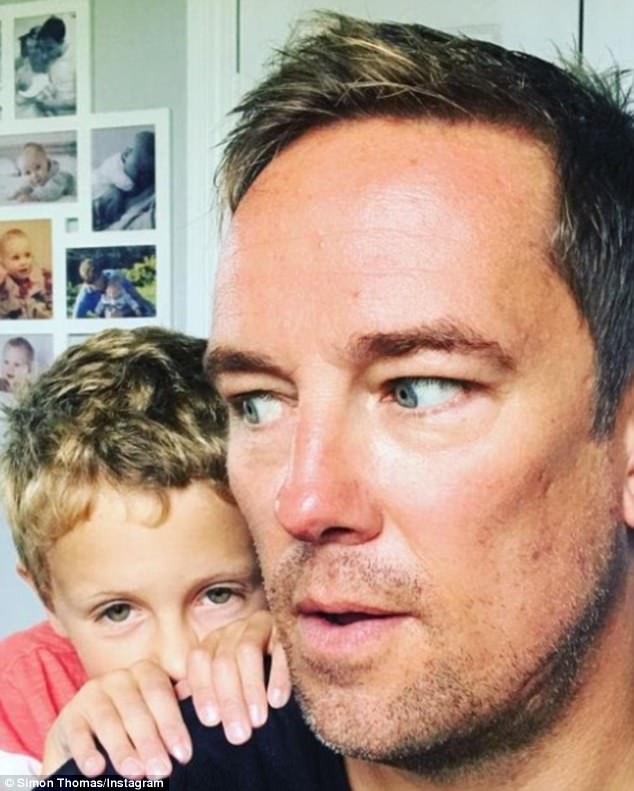 Simon announced the devastating news of his wife’s death on Twitter, writing: ‘Today I am crushed with indescribable pain. Just three days after falling ill with acute myeloid leukaemia, my dear wife Gemma passed away yesterday evening surrounded by her family and friends.’

He has since found some solace in raising awareness about the disease, writing in a now viral tweet: ‘Three times my wife Gemma went to the doctor in six days and three times she was sent home and told to rest.

‘Four days after her final visit to her GP she was dead. We have to help and train our GP’s and to detect blood cancer earlier. @bloodwise is doing this. #hiddencancer’.

Simon is now backing a campaign to educate GPs about the disease, encouraging them to take blood tests from suspected sufferers of the disease which affects 2,600 people in Britain a year.

A Just Giving page Simon has set up in wife Gemma Thomas’ name for Maggie’s Centres, a charity which offers support to people affected by cancer, has already raised £13,920 in the last month.