SIMON WALTERS asks when WILL the BBC make a drama about a venal, lying Labour politician?

He is a shameless adulterer, has at least one illegitimate daughter, fell out with another, boasts he is a ‘character’, loves posing for ‘selfies’ with the public, says it is time to put Brexit ‘in the past’, and wants to depose a female Tory Prime Minister who despises him as much as he despises her.

There are no prizes for those who read the above and thought of Boris Johnson.

Of course, it is possible that their extraordinary similarity is simply mere coincidence.

But given that the show’s author is veteran champagne socialist Sir David Hare and the film was broadcast by our left-leaning national broadcaster, I think not.

Hugh Laurie stars as Peter Laurence, a Conservative politician who is also a shameless adulterer who boasts he is a ‘character’ in the new BBC drama Roadkill in what Simon Walters describes as a ‘thinly disguised anti-Boris hatchet job’ as he says the BBC is now left-leaning

To give Sir David some credit, in a lame attempt to provide cover for his thinly disguised anti-Boris hatchet job, he has made Laurence more suburban than our Etonian leader. He’s also relegated his show’s lead character to the rank of a Cabinet minister, not Prime Minister.

And for good measure, he’s even thrown in the characteristics of two other notorious Right-wingers hated by the Left.

Take the opening scene of the drama’s first episode, where Laurence emerges from court having lied his way out of a libel dispute with a Leftie journalist.

Such a scene could be taken straight from the real-life scandal of ex-Tory Cabinet minister Jonathan Aitken, jailed in 1999 for perjury and perverting the course of justice.

And secondly, in place of Johnson’s plummy vowels, Laurence speaks with the spivvy blokeishness of Nigel Farage.

After watching just one episode, it’s eminently clear that Roadkill is in the mould of the greatest modern political TV drama of all, House of Cards, first broadcast in Britain in 1990.

Like Roadkill, it was based on actual events: The fictional villain in House of Cards, Tory chief whip Francis Urquhart, played by Ian Richardson, will stop at nothing to succeed Margaret Thatcher as Prime Minister, including murder.

However, unlike Laurence, for all his evil Urquhart – famous for his sinister ‘You might think that, but I couldn’t possibly comment’ catchphrase – was not based on any particular contemporary politician. In fact, the same goes for many of the small screen’s most illustrious political dramas.

In America’s much-lauded The West Wing, for example, even though the President is a Democrat, viewers aren’t repeatedly hit over the head with a political sledgehammer Hare-style. 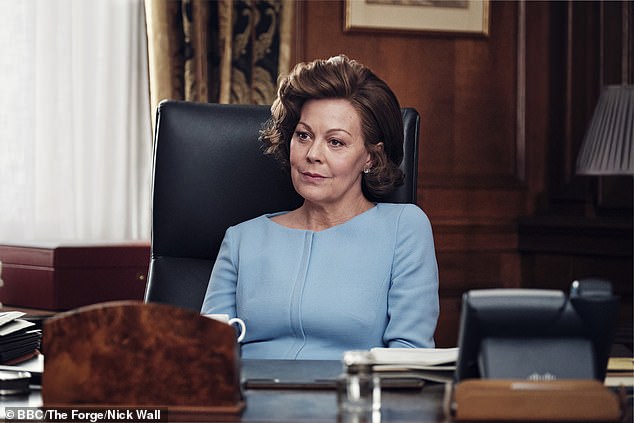 Helen McCrory, pictured, is at her best playing PM Dawn Ellison in her Aquascutum powder blue suits, and is introduced scoffing with contempt at rich Tory donors after they cough up £200,000 for the Conservative coffers at a No 10 drinks reception in the BBC’s Roadkill

Instead, they are allowed to draw their own conclusions about him and his policies. Yet in Roadkill, it is spelled out loud and clear almost from the first frame that Johnson – sorry, Laurence – is an evil Conservative.

To remove any doubt that it is set in the here and now, Laurence says – during the kind of radio phone-in that Johnson revelled in as London mayor – ‘You have to forget about Brexit, it’s in the past now.’

It could have been taken straight out of Downing Street’s handbook for ministers: ‘Stop promising to “get Brexit done” – it’s been done already.’

And of course, no Hare drama about the Tories would be complete without a gratuitous dig at Thatcher, whom he once accused of ‘barbarism’.

Sure enough, Roadkill’s imperious Prime Minister Dawn Ellison, played by Helen McCrory, wears Aquascutum powder blue suits, and is introduced scoffing with contempt at rich Tory donors after they cough up £200,000 for the Conservative coffers at a No 10 drinks reception. 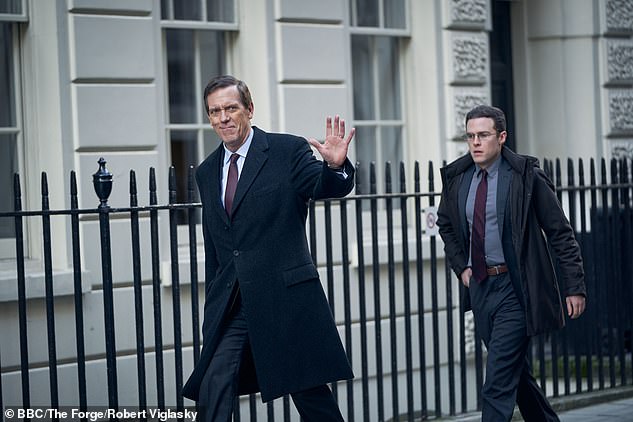 How else are we to explain the fact that more or less every white male character is portrayed as bad, while almost every ethnic minority one – from Laurence’s black barrister to his imprisoned illegitimate mixed-race daughter – are supposedly good?

Suffice to say that the plot of Roadkill is as unsubtle as the title: We are expected to believe that wily Laurence would agree to go to a female prison to suddenly meet someone claiming to be his illegitimate daughter; meanwhile the alcoholic Irish journalist on his case is determined to prove Laurence is involved in an Anglo-US plot to sell off – yes, you’ve guessed it – the NHS.

Shortly afterwards, when Laurence is told of a riot at the prison, he mutters he hopes there have been ‘deaths’, presumably his daughter among them. Could it be any more obvious that this Tory is supposed to be a baddie?

Judging from episode one – I have not seen the rest – I wouldn’t be surprised if Laurence is caught out in another business conspiracy, this time involving the jail where his illegitimate daughter is imprisoned.

Or perhaps Laurence’s sordid ‘Jack the Lad’ days in Notting Hill a few decades ago will be used to drag in the Windrush immigration scandal. I wouldn’t bet against it.

No doubt every type of anti-Boris and anti-Conservative trope will be trotted out by Hare before the four-part series reaches a predictably anti-Tory climax.

As the Tory MP Andrew Bridgen put it, ‘If they did the same for a Left-wing character it would probably be classed as a hate crime.’