Simone Biles bid farewell to her tropical Thanksgiving vacation by sharing a final bikini snap from the picture-perfect beach where she celebrated the holiday with her family and friends.

The 24-year-old flaunted her pert derriere in a skimpy two-piece swimsuit the latest snap from her getaway in Belize, before returning home just in time to celebrate being named as one of People Magazine’s 2021 People of the Year.

In the photo Biles can be seen standing with her feet in the ocean and her back to the camera while sporting a high-cut floral bikini that accentuated her athletic physique.

The bikini photo was the last of many to be posted by the gymnast during her trip, which she enjoyed with her parents – Ron and Nellie – and several other family members.

Other posts shared from her exotic getaway show the sports star modeling a variety of colorful bikinis, with one funky stop motion video capturing her parading down the beach in a bright orange swimsuit and silk headscarf while twirling around to show off her ensemble to full effect.

Strike a pose: Simone Biles marked the end of a recent tropical vacation in Belize by sharing a cheeky bikini snap from the picture-perfect beach where she spent Thanksgiving 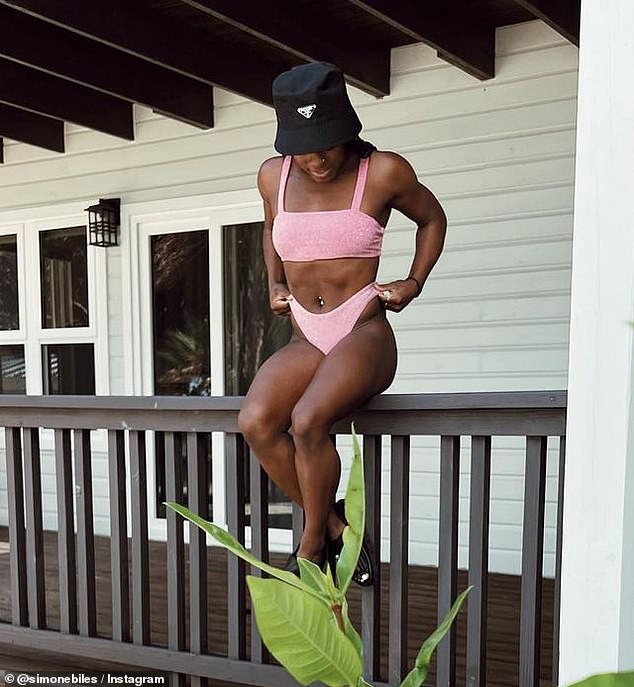 Beach babe: The 24-year-old gymnast shared several swimsuit snaps from her getaway, which she enjoyed with her parents, Ron and Nellie, and a few other family members 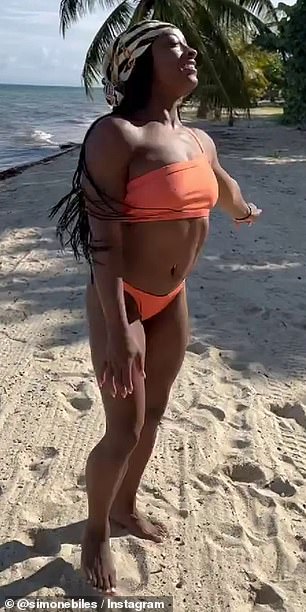 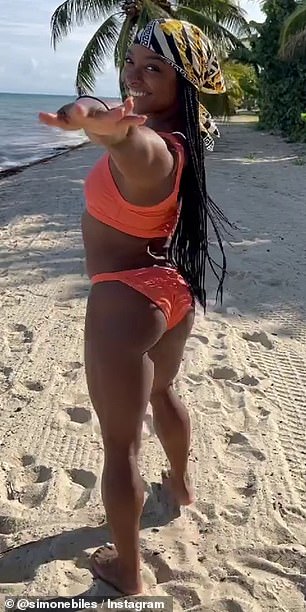 On the move: Biles has enjoyed several vacations since returning from Tokyo and has made sure to share plenty of beachfront content throughout all of her trips

In another photo, Biles can be seen sitting perched on the balcony of a beachfront property while sporting a pink bikini and a black Prada bucket hat.

While the athlete clearly relished her time on the beach, she had plenty to celebrate upon her return home – with People naming her as one of its three People of the Year for 2021, while praising the work she has done to raise awareness about mental health.

Biles features on one of three celebrity covers of the People of the Year issue, with Dolly Parton and Sandra Oh landing the other two.

In her shoot for the publication, the gymnast eschewed leotards and workout wear for a chic one-shoulder orange dress, complete with a large bow and flowing skirt.

As well as posing for her fashion-forward shoot, Biles also spoke to the publication about her tumultuous run at the Tokyo 2020 Olympics, where she made the shock decision to withdraw from five event finals amid struggles with her mental health.

Although she admitted that she still feels ‘sad’ that her Tokyo journey did not go the way she had wanted, Biles insisted that she has ‘no regrets’ about her time at the Olympics – describing it as ‘one of the first time in her career where she felt courageous’. 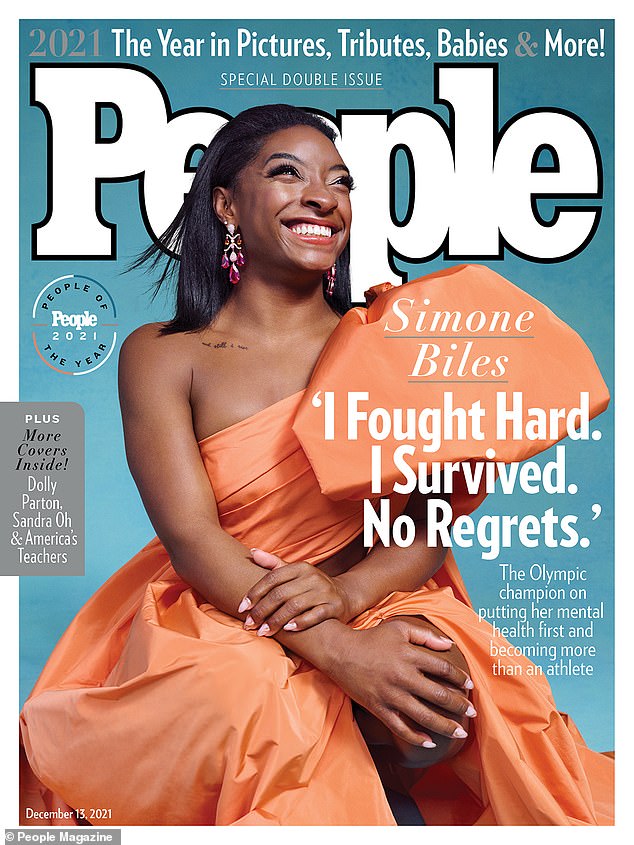 Milestone moment: Upon her return from vacation, Biles was named as one of People Magazine’s 2021 People of the Year

‘That’s probably one of the first times in my career where I felt courageous and I felt like I had got to speak up for myself,’ she told the magazine.

‘[I] definitely can walk away from Tokyo, feeling courage, feeling at ease. And I did everything I could.’

Biles made headlines around the world when she pulled out of the team final after competing on just one event – the vault – on which she only narrowly avoided a crash landing.

At the time, the gymnast said she withdrew in order to protect her mental health – and she later revealed that she had been struggling with a condition called the ‘twisties’, which essentially makes gymnasts lose their spatial awareness and get ‘lost in the air’.

She continued to struggle with the twisties for much of her time in Tokyo, and subsequently pulled herself out of contention for the all-around, vault, uneven bars, and floor exercise finals – the majority of which she had been expected to win.

Biles eventually returned to competition for the balance beam final, in which she claimed a silver medal.