‘Simplify, then add lightness’: Investors can learn from Colin Chapman

‘Simplify, then add lightness’: My Isa could learn from Colin Chapman’s Lotus but I’m baulking at the cost of an investing spring clean, says SIMON LAMBERT

‘Simplify, then add lightness.’ That was the famous philosophy of Lotus cars founder Colin Chapman since lifted to other walks of life and often reiterated.

It’s a far more pedestrian affair, but his words sprang to mind when I went to do some spring cleaning of my Isa the other day.

My Isa will never be as carefully crafted as Chapman’s race-winning Lotuses – most famously piloted by driving legend Jim Clark – but with 54 holdings, this jumble of shares, funds and investment trusts could certainly do with some simplification.

And in the spirit that you learn as much from reading about others’ investing mistakes as their successes, here’s my dilemma.

‘Simplify, then add lightness’: The philosophy of Lotus founder Colin Chapman, left, led to his race cars punching well above their weight, most famously with Jim Clark, right, at the helm

There’s a problem with adding lightness: even if I took a relatively low threshold of 1 per cent of the Isa portfolio and sold anything below that, I’d rack up a hefty £240 in dealing fees.

But should I just bite the bullet and pay that?

As I have built up my stocks and shares Isa over the past decade or so, invariably extra stuff has been added and very little taken away

Consolidating those small holdings into others that I have much greater conviction in would be the right thing to do, but fronting up that much in fees feels seriously painful.

I’ve ended up here because while Chapman’s ‘choose quality and make less equal more’ philosophy has always appealed in theory, like many people I find it hard to follow in practice.

And so, as I have built up my stocks and shares Isa over the past decade or so, invariably extra stuff has been added and very little taken away.

There are 30 holdings that each represent less than 1 per cent of the overall portfolio amount, adding up to 11 per cent of its total value.

Within that there are a few I’d happily bump up in size, a handful that make me think ‘meh’, and a long tail of stragglers I have no doubt I should ditch.

Some 22 of the holdings are each less than 0.5 per cent of the portfolio and there are ten holdings at the bottom that don’t even manage to breach the 0.25 per cent mark.

This kind of holding size might be fine if you are the £19billion growth-focussed Scottish Mortgage investment trust building a position in a potential game-changer of the future, but as a personal investor it’s daft. 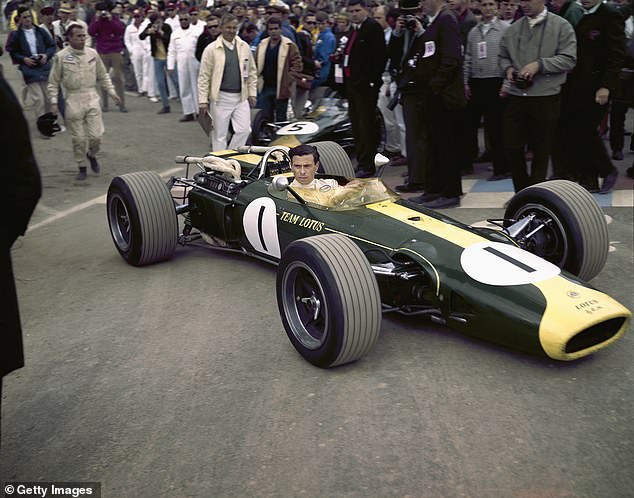 Jim Clark in his race-winning Lotus at the US Grand Prix at Watkins Glen in 1966 (And yes, this is just a gratuitous extra Jim Clark picture in an investing column).

My long list of holdings came about by happenstance – as I suspect will be a similar case for many long-term investors.

A big chunk came from a foray into building a share portfolio in the early days of my Isa when it was held with the now defunct Club Finance Frequent Trader platform that charged just 50p for share dealing.

Some of those share picks delivered very big gains – there’s even been some multi-baggers – while others turned out to be duds. But many of the middle bracket have managed to grow in value yet shrink in size compared to the overall portfolio, as more money has been paid into bigger holdings in my Isa over the years.

Some of share picks have been multi-baggers – while others turned out to be duds. But the middle bracket have grown in value yet shrunk in size compared to the overall portfolio

For example, my Barratt Development shares are up 85 per cent on when I bought them but only represent 0.5 per cent of the total Isa.

Of the 54 holdings in my Isa, 22 are individual company shares and they make up the bulk of those small holdings. The rest is made up of 26 investment trusts and six funds.

For a long time I have known that the sensible move would be to simplify: sell off all the small holdings and divert a substantial chunk of my money from dithering into doing something useful.

Ideally, I would get the portfolio down to no more than 25 to 30 holdings.

Yet, as I mentioned above, the cost of doing so at £7.99 a throw – plus some extra buying fees when the cash gets reinvested – has always put me off. In reality though, the total spring clean dealing charges would represent only a few per cent of the sum released.

I also need to get over that feeling of looking at through the tiddlers and thinking of far too many of them: ‘Well that’s not a bad company, maybe I should hold onto that’.

If this was a business decision, I’d do it without a shot and consider the fees as a cost of business, yet for some reason my brain doesn’t compute in the same way when it comes to my investment Isa.

It’s no wonder Warren Buffett advises most people to ditch stock-picking and get a simple tracker fund instead.