Hollywood award shows have been popular platforms for political statements lately, but the messages tend to skew toward the left.

Tonight at the Grammy Awards, though, American singer Joy Villa made a very conservative statement on the red carpet.

The 31-year-old, who has released a handful of singles since 2011, wore her anti-abortion views on her sleeve — or, we should say, her dress.

Statement: Joy Villa wore an anti-abortion dress to the Grammy Awards this year 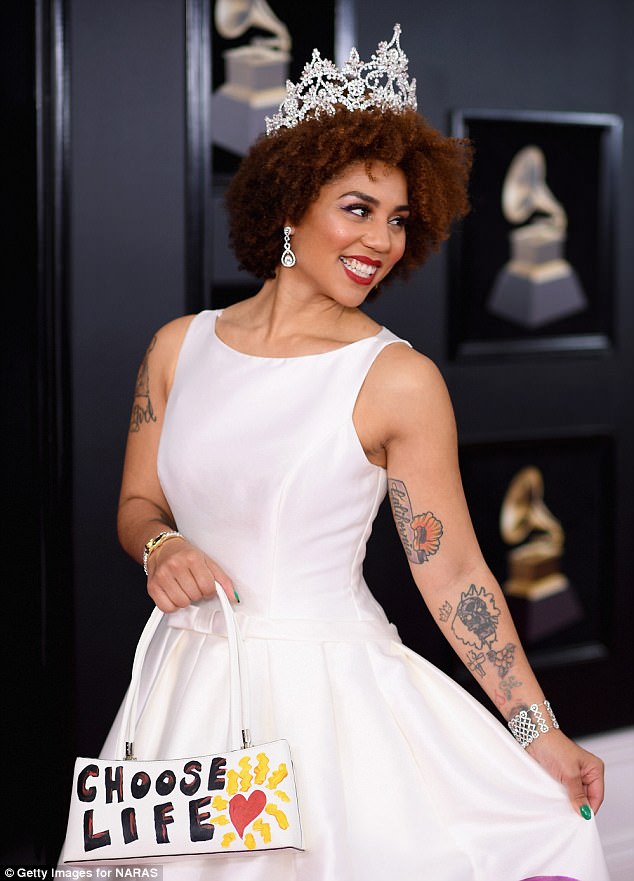 Loud and clear: The 31-year-old said she wanted to make a statement with her fashion choice, like she ‘always’ does 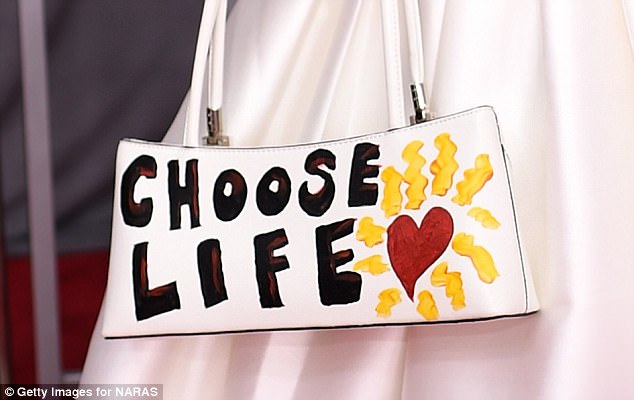 Point accross: She carried a bag that she had painted with the words ‘Choose Life’ 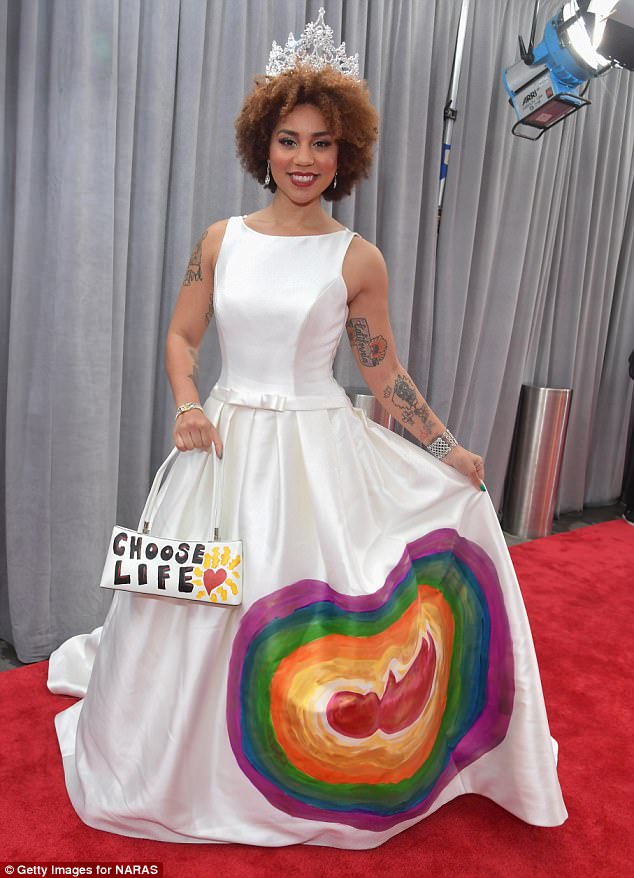 Unique: She customized her Pronovias dress and hand-painted the skirt with the rainbow fetus picture

Villa turned up on the red carpet on Sunday evening in a customized white gown, originally by Pronovias. On the full skirt, she hand-painted the image of a fetus radiating colors of the rainbow.

She accessorized with a tiara — she likes to go by Princess Joy Villa — and a small white bag that spelled out her message, in case anyone missed it.

‘Choose Life,’ she painted on the bag in all caps, adding a red heart with yellow squiggle lines.

‘I’m a pro-life woman. This year I chose to make a statement on the red carpet like I always do,’ she told Fox News. ‘I’m all about life.’

Villa recently attended the Women’s March in Los Angeles, where she held up anti-abortion signs.

She’s been quite vocal about her feelings regarding abortion in the past, too, and in November took to Instagram to post the rainbow fetus art that would come to adorn her Grammy dress. 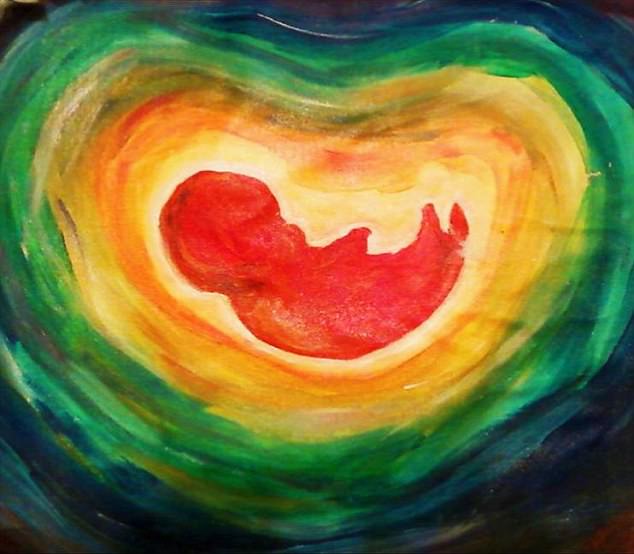 Origins: She shared a similar fetus painting in November and opened up about getting pregnant at age 21 and giving the baby up for adoption 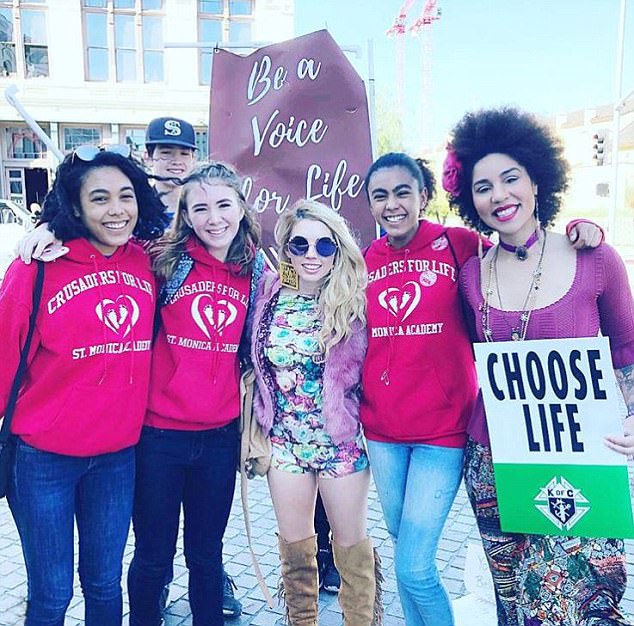 Protest: She attended the Women’s March earlier this month, though her views were quite different from most of the others who attended 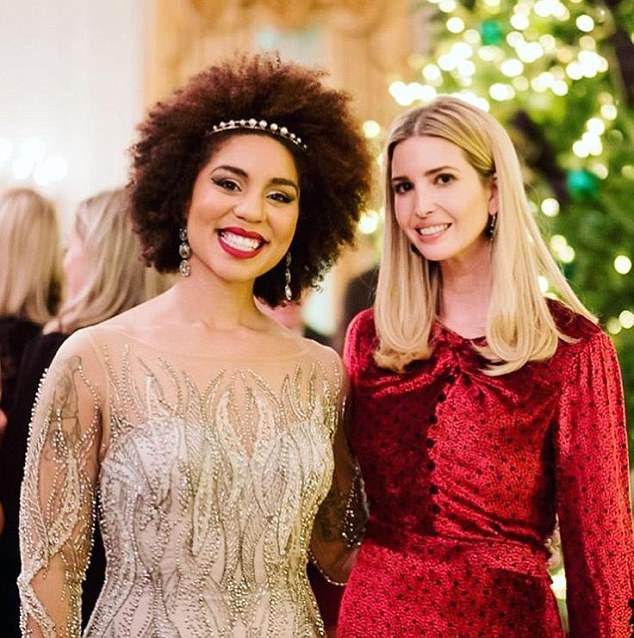 Fan: Villa said she is ‘close’ with Ivanka Trump, and attended the White House Christmas party in December 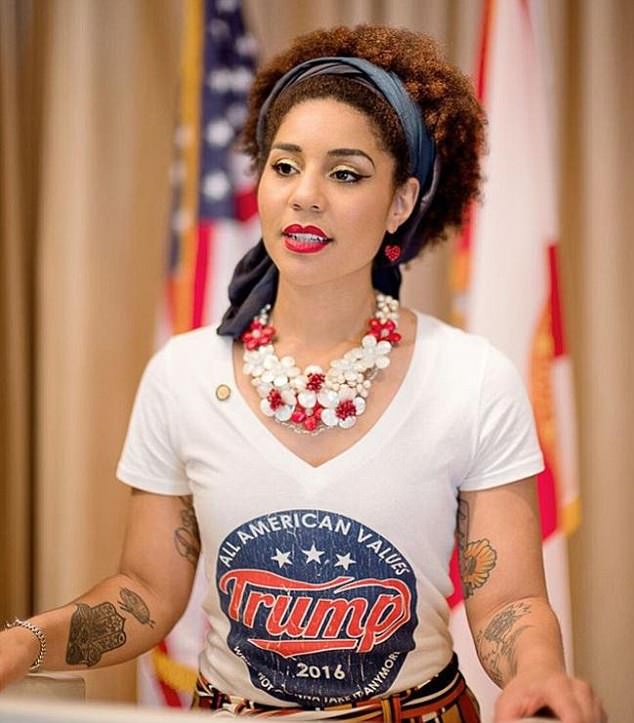 Supporter: Since Trump moved into the White House, she has attended events there and at Mar-a-Lago

‘For a time in my life I struggled as a young artist turning 21 years old in an abusive, drug addled and toxic relationship where I found myself pregnant,’ she wrote. ‘I knew I couldn’t financially or emotionally take care of myself as a broke actress/model/singer in Hollywood and I had limited family who’d be able to help me. I prayed for help.

‘I was shown the answer: I chose the most difficult choice I’ve ever faced, to open adopt out my baby to a caring and beautiful family, working with an adoption agency who helped every step of the way.

‘I get to see and speak with my child, because it’s an open adoption. Trust me, this choice is life-shattering weather you raise your baby or adopt out, but please remember you have more choices then murder,’ she wrote. ‘You can choose life. Life for baby, for you, for the adoptive parents.

‘ I’m not here to judge you. I’m here to tell you I survived it, and so will you. You can be a hero and victor instead of a victim. Life is a wonderful blessing and gift! Now I have a wonderful husband and gorgeous bonus kids, including my 14 year old stepdaughter I’ve helped raise since she was 8!’ 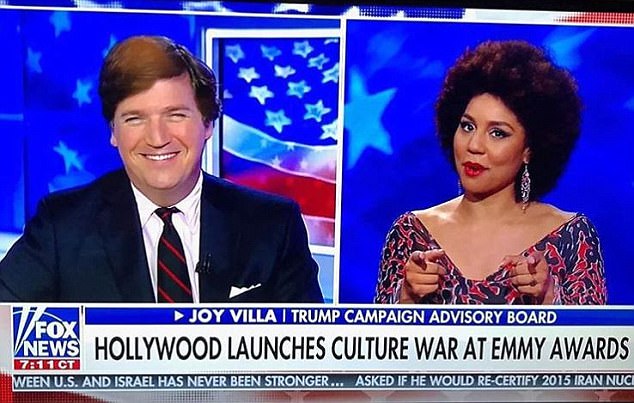 Side gig: This year she also became a commentator on Fox News 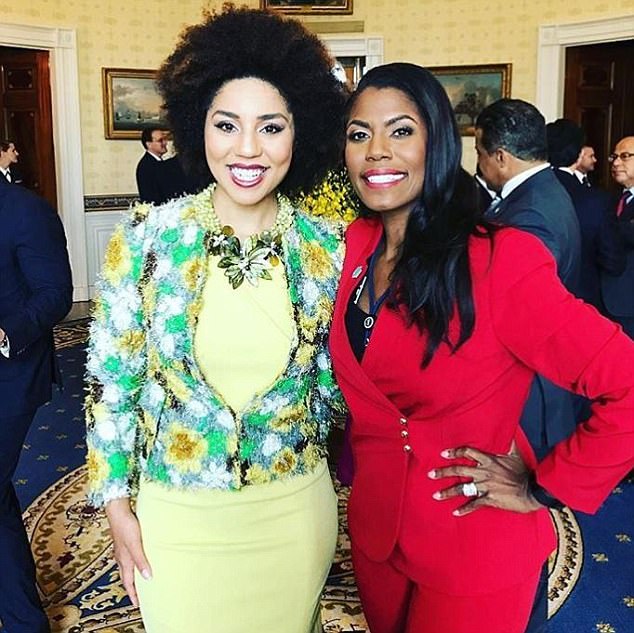 Bye: She’s pictured with Omarosa Manigault, before the former Apprentice star was fired 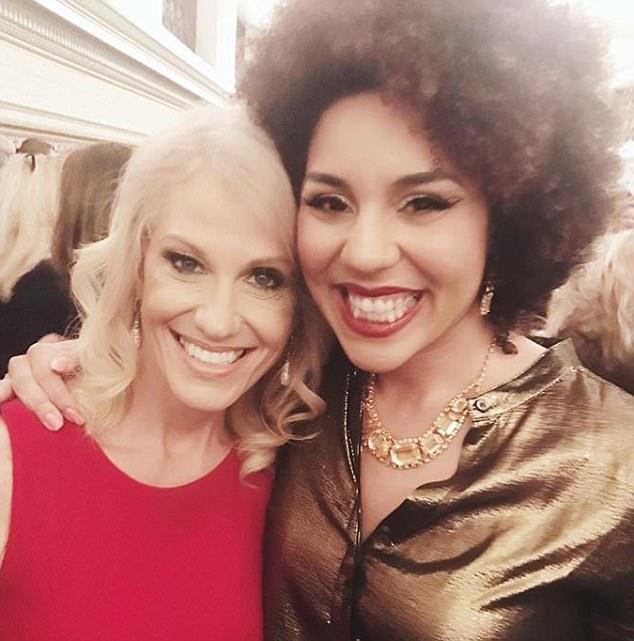 The girls: Here she is pictured with Kellyanne Conway at another event

‘I love what he is doing; unemployment is down,’ she said. ‘I am totally for President Trump, and it’s only been one year. I can’t wait for the next seven years!

She added, too, that she is a good friend of Ivanka’s and most recently spoke to the first daughter during the holidays a month ago.

‘I’m very close with his daughter Ivanka. She is a phenomenal woman. She wants to empower women,’ she said.

In fact, on December 24 she uploaded an Instagram photo taken with Ivanka at the White House Christmas party. 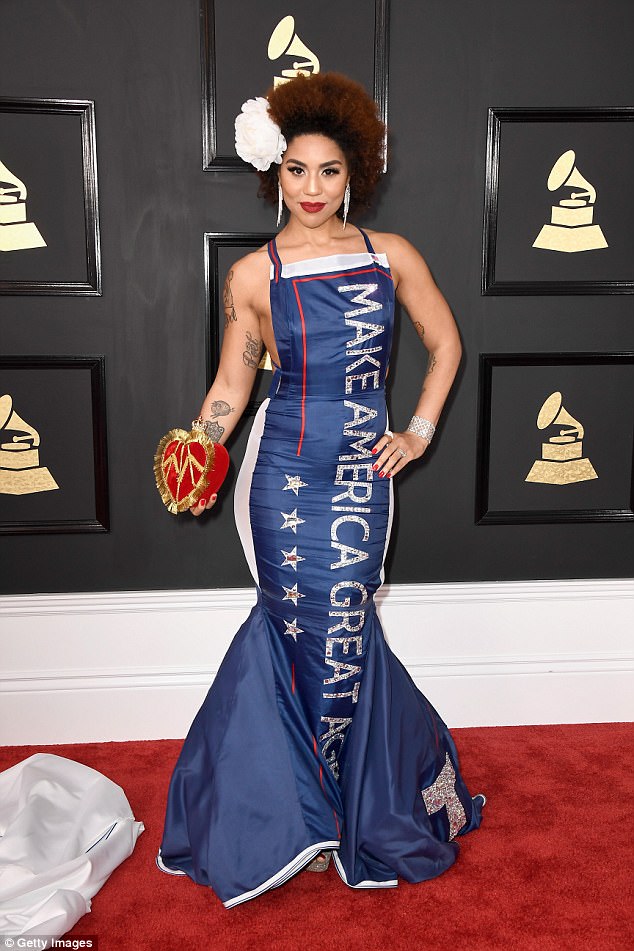 Flashback: Last year, she wore a MAGA dress to the Grammy Awards 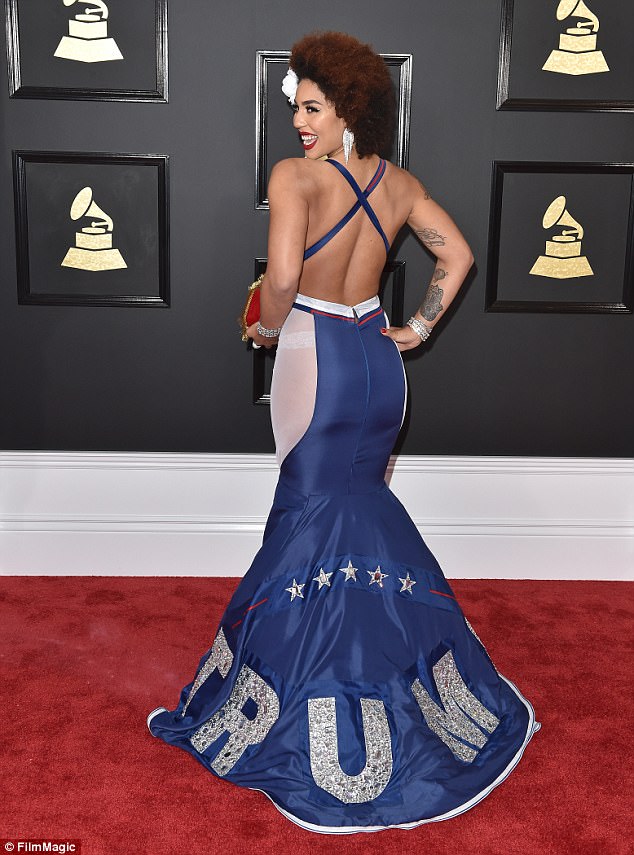 ‘I am totally for President Trump, and it’s only been one year. I can’t wait for the next seven years!’ she said today

Villa was just as supportive of Trump at the Grammys last year, walking the red carpet in another statement dress by Andre Soriano.

The formfitting number with a mermaid skirt and train was made in red, white, and blue and said ‘Make American Great Again’ down the front. Along the back was Trump’s name.

‘What an amazing journey this has been,’ she wrote on Instagram today, posting a throwback photo from the event.

‘I’ve reached great heights, been to the White House multiple times, met with the Trump Administration on issues that matter to me, joined the Trump 2020 Campaign, outsold my favorite artists, made thousands of new fans, launched my merch store joyvilla.com, became a regular commentator fir @foxnews, went to the World Series, launches my Exploratory Committee into Congress, finished a new EP #HomeSweetHome, and working in my first full length album.’