A single jab which protects against all strains of flu for up to a decade could be available on the NHS in just two years.

The results of a UK human trial being announced today suggest the jab is more effective than existing vaccines which target only a few types of the virus.

Its creators claim it will end the scourge of flu globally, turning it into a mild illness rather than a killer.

The FLU-v jab, which is the work of British company Imutex, is said to fight off every strain, from the yearly winter virus to virulent strains such as swine flu and the recent Aussie flu. It is likely to cost between £20 to £50 per person but will need to be given only every five to ten years.

A single jab which protects against all strains of flu for up to a decade could be available on the NHS in just two years. File photo

Current vaccines target proteins on the virus surface, but regions of these proteins constantly change in a bid to fool the immune system.

This means the virus is always one step ahead of the vaccine, which is why it must be remade each year.

The new jab has been created to target unchanging regions of the virus proteins by boosting the immune system’s T-cells that recognise and attack foreign invaders.

The trial involved 123 participants aged 18 to 60 being infected with the H1N1 swine flu virus and spending eight days in a room.

Eighty per cent were prevented from getting flu after having the jab.

The vaccine was also twice as effective at limiting flu-like symptoms, with 60 per cent of those given the jab developing fewer than two symptoms. 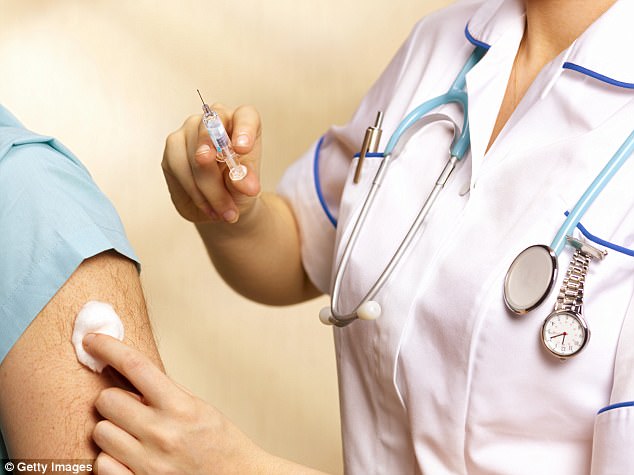 The results of a UK human trial being announced today suggest the jab is more effective than existing vaccines which target only a few types of the virus. File photo

This suggests that even when people catch the flu virus, the vaccine can reduce the impact of its symptoms.

And a less severe infection for the elderly would slash the likelihood of complications and hospitalisations.

After participants received FLU-v, their immune cells were tested against a range of flu strains. In all instances, the cells recognised and killed the virus.

It is hoped the results give the vaccine ‘breakthrough designation’ from the US Food and Drug Administration – fast-tracking it through the approval process and paving the way for it to be available on the NHS within two years.

The UK’s top flu expert John Oxford, emeritus professor of virology at Queen Mary University of London, said: ‘I am enthusiastic about universal vaccines full-stop. It is recognised as being a good way forward.

‘If one should have an effective universal flu vaccine, people could relax because you could have a dose of it and it would give years of protection against whichever virus is circulating.’

Dr Ed Schmidt, from the Universal Influenza Vaccine Consortium at Groningen University, Holland, said the vaccine could be ‘a game changer’, adding: ‘It would lead a serious reduction in deaths and have a major impact.’

This winter, the annual jab worked in just a quarter of the population in what was called the worst epidemic in seven years.

The NHS spends more than £100million annually on its flu vaccination programme alone.

A universal jab could save the NHS around £27,000 per person over the course of their lifetime from less sickness absences and reduced pressure.