Single Australian mothers on benefits with families of up to 12 kids are asking for more money after claiming the amount they receive from Centrelink is ‘not enough’.

Three unemployed mothers with large families told A Current Affair that while they receive substantial benefits under the Australian welfare system – regarded as one of the more generous in the world – the amount they get per child should be increased because it isn’t enough to adequately help cover the costs of raising their kids.

One of the women revealed that she receives just under $2000 a fortnight from the government, but wants that increased to $2700 because she cannot get by on the current payments.

Lisa, a mother of 11 children, is one of three unemployed women dependent on welfare who told A Current Affair on Wednesday that they’re struggling to make ends meet for their large families.

Despite earning more money with every pregnancy, Lisa said it’s still not enough to support her big brood.

The 41-year-old told said she receives an average of $183 from Centrelink for each of the five children who still live at home with her.

‘I don’t get paid from Centrelink for these children anymore because they’ve all moved out of home and grown up,’ she told A Current Affair as she pointed to a list of names tattooed on her right arm.

She then pointed to the names tattooed on her left arm and said she still receives benefits for those children.

‘Nothing worked. I tried getting my tubes tied but they told me I was too young after having five children,’ she said.

Lisa explained she was told she was too young to undergo the surgery and was only recommended to be placed on a waiting list after having five children.

She fell pregnant again soon after.

The mother-of-11 is filmed walking out from a trailer where she lives, with her belongings scattered on the ground.

Lisa wipes away tears as she says she is in desperate need of more money to help her and her children get by. 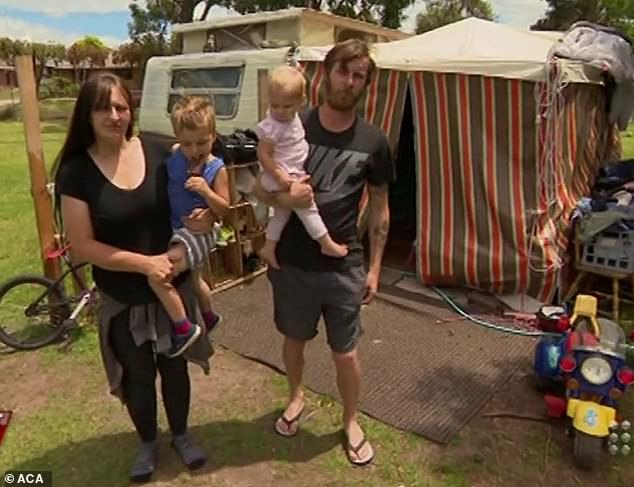 Lisa (left) says she is in desperate need of more money

Cally, who has 12 children between her and her partner, lives in a cramped home, with the children’s bedrooms separated by curtains.

She told the program she receives $1,948 a fortnight – a third of which goes toward food. 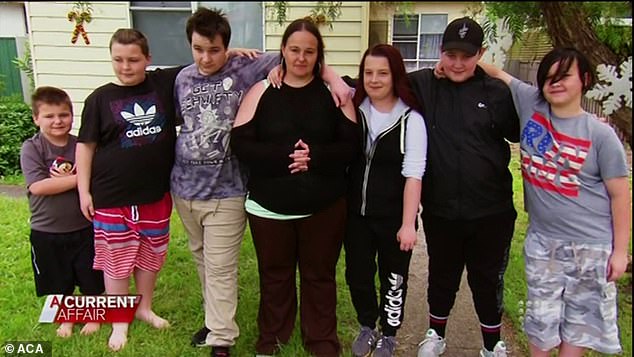 Karen Francis (pictured), a single mother of nine children, admits that she shouldn’t have fallen pregnant since she wasn’t in the right financial situation

Karen Francis, a single mother of nine children, told A Current Affair she knows she shouldn’t have fallen pregnant since she wasn’t in the right financial situation.

The 34-year-old looks after three of her children, while her mother cares for the other five.

The Department of Human Services helps out by paying her $1000 a fortnight, while her mother receives $3000.

Ms Francis, who’s never had a job in her life, said she struggles to provide the best to her children, including $100 PS4 and XBox games.

‘Money doesn’t last long. As soon as they know you got paid, they’re all on you,’ she said.

Despite Australia having what is described as one of the most generous welfare systems in the world, Ms Francis thinks more needs to be done to help struggling families.

‘I think they need to look at each family individual, at first you’re alright but as more kids come along it seems you struggle a bit more,’ she told the program.