Single New York lawyer has been a bridesmaid 23 times

A New York lawyer whose life is like a real life version of the movie 27 Dresses has revealed how, after being a bridesmaid 23 times, she has no interest in getting married herself.

In the romantic comedy, Katherine Heigl plays a perennial bridesmaid who has stepped into the role 27 times – four times more than Claudette Delacerna, 44, who has followed 23 brides down the aisle.

Despite witnessing almost two dozen couples say, ‘I do,’ Claudette, who moved permanently to the US in 2013 from her native Malaybalay City in the Philippines, where most of the weddings have been, said: ‘I’m not bothered about marriage myself.

‘I have a really busy life and I’m happy with it how it is.

‘Of course, when you see friends getting married, you do feel something. And for a while, because I went to so many weddings, I wondered if I wanted that too. But now, I’m not bothered about marriage myself. ‘ 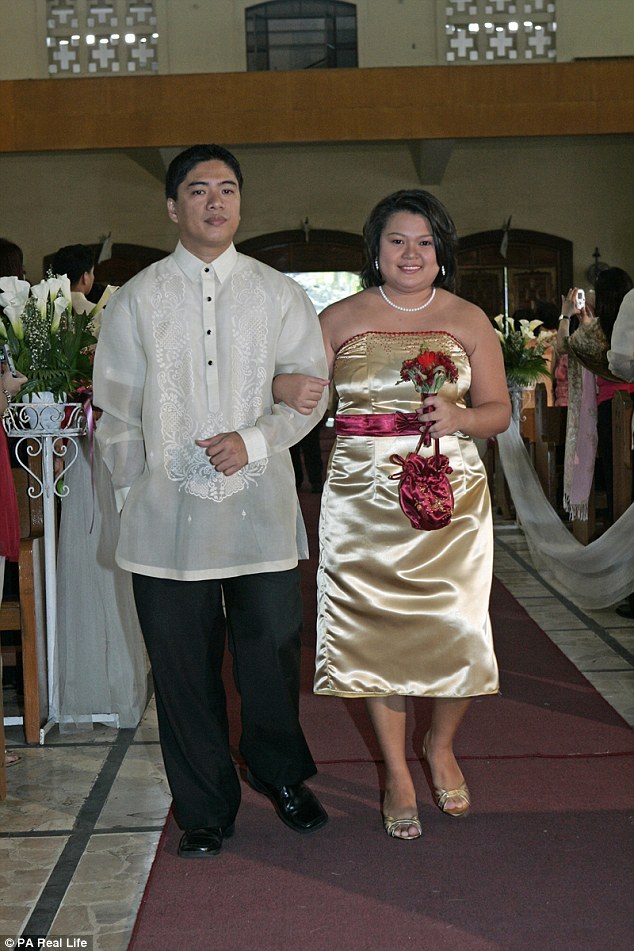 Claudette’s life echoes the plot of the hit film 27 Dresses, in which Katherine Heigl plays a perennial bridesmaid

Singleton Claudette took her first turn as bridesmaid back in 1984 when she was just 10, for her aunt Inday.

Three years later, in 1987, she stepped into the role twice more for some cousins.

‘The next time was in 1990, for my aunt Doris,’ she recalled. ‘I think that was one of my favourite weddings. Doris is like a sister to me, so it was really special.

‘That was one of my favourite dresses, too. I prefer short, and it was so comfortable to wear.’ 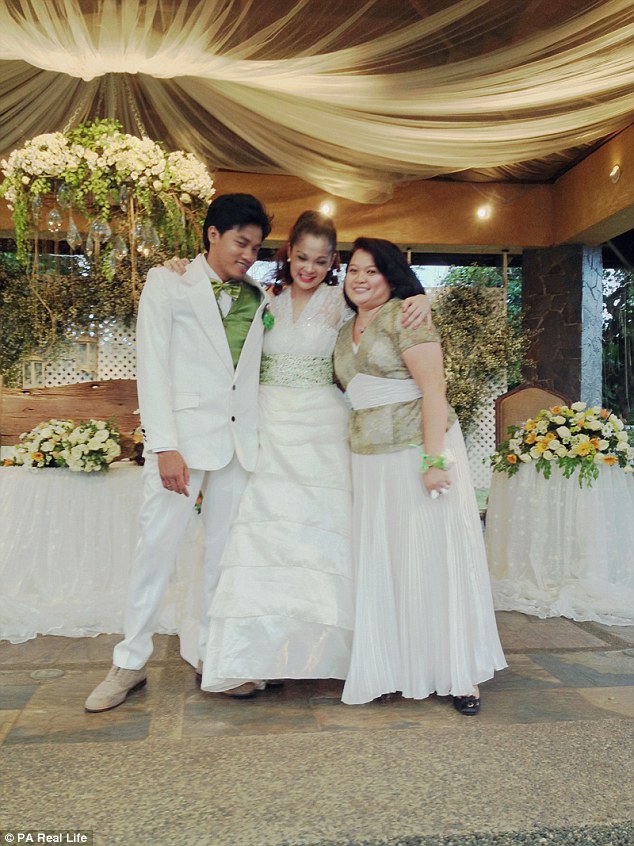 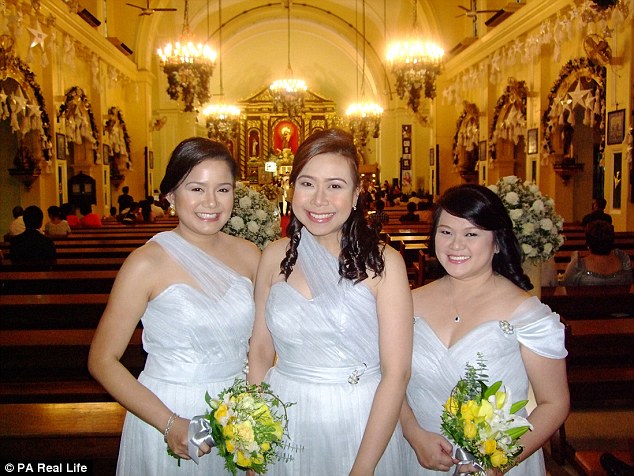 Next, in 1991, Claudette was a bridesmaid for her uncle Neal and his now-wife Terry, before performing the duty the following year, as her cousin Bong married his bride Venia.

After that, in 1997, she took up the role for the parents of an ex-boyfriend, who she does not wish to name.

‘They had a church wedding with all the trimmings. The bridesmaids were a mix of their family and their son’s partners,’ she explained.

As the 90s drew to an end, Claudette saw her friends grow up and begin to get married themselves, meaning she was asked to step up several more times. 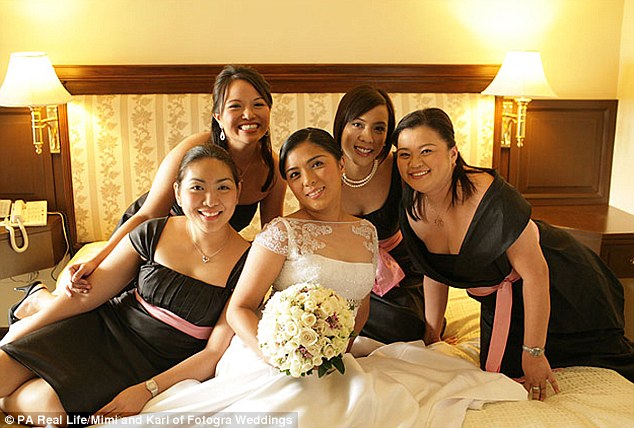 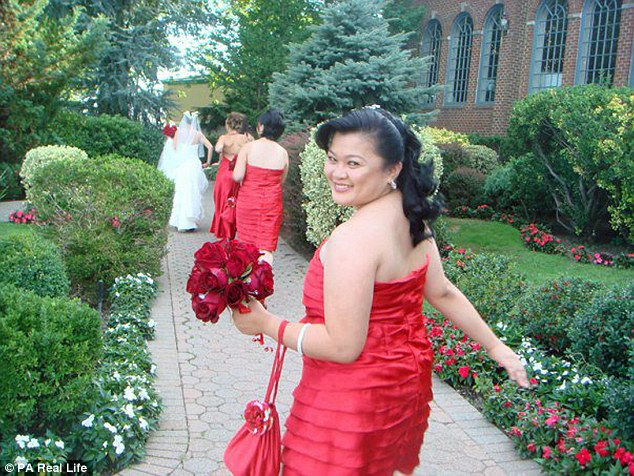 Lady in red: In 2010, Claudette was bridesmaid for Kris, the daughter of a family friend

First came her schoolmate Bambi’s wedding in 1998, followed by two childhood pals – Mayette’s later that same year and Brenda’s in 2001.

Then, in 2004, she walked down the aisle accompanied by groomsman Arnel, another old friend, as their mutual pals Sheila and Sam tied the knot.

‘After that, I had a couple of years out, before being bridesmaid twice in 2006. Once for my friend Frances and her husband Noel, both of whom I knew from law school,’ she said.

‘Another time was for Christine, my old roommate from the University of the Philippines, who married her husband Marc.’ 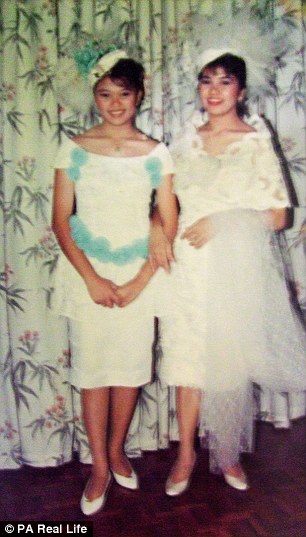 In 2013, Claudette performed bridesmaid duties for family friends Candice and Coi (left). Right: The wedding of her aunt Doris in 1990 was one of Claudette’s favourites 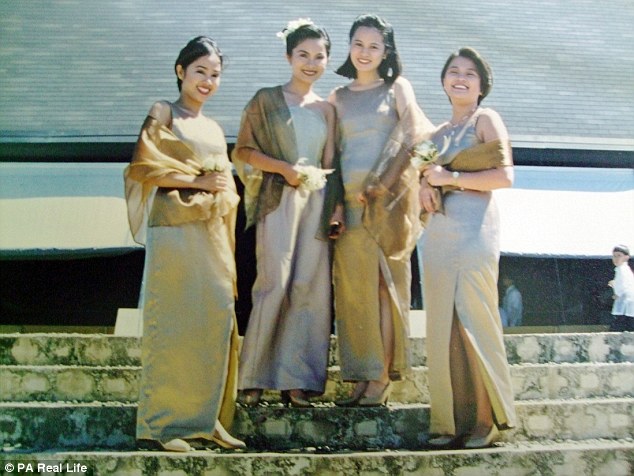 Claudette (right) was a bridesmaid for Mayette, a childhood friend in 1998

In 2008 – her busiest year to date – Claudette donned a bridesmaid dress three times.

First was for Cha and Bayan, another couple she knew from law school.

Then came the nuptials of Grace and Oyen, Claudette’s high school friends, who had a ‘beautiful hippy ceremony.’

Then, towards the end of the year, she stepped up once more for Sharon and Ramil, who she grew up with in Malaybalay City.

Next, after her cousin Kim’s nuptials in 2009, she attended two weddings in 2010, both times as a bridesmaid – once for her cousin Ian and then for Kris, the daughter of a family friend, who exchanged vows with husband Paul. In 1991, Claudette was bridesmaid for her uncle Neal and aunt Terry ‘After that, I declared retirement,’ said Claudette. ‘But as you can see, I went on to do more.

‘I just couldn’t say no, even if at times I didn’t feel particularly comfortable with myself. I’m not a dressy person, so it’s strange to wear these gowns, but I love looking back on the pictures.

‘It’s funny seeing myself through the years at varying weights and with different hair colours.’

After coming out of ‘retirement,’ Claudette was bridesmaid for Meg and Jonas, her law school classmates, in 2012, followed by family friends Candice and Coi, in 2013. 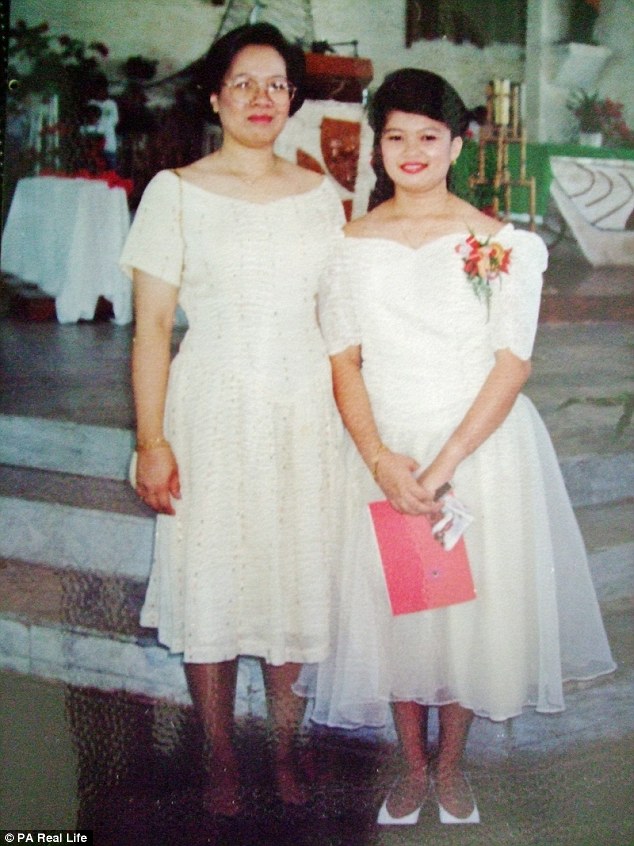 She was then a bridesmaid twice more for some cousins in 2014.

And she is set to perform the duty once again in August this year in New York, for her former university roommate Ivy.

‘I’m not really sure why I’ve been asked to do it so many times,’ Claudette reflected. ‘I think it’s partly from having a really big family.

‘In Filipino culture, it’s common to include extended family, like cousins, in the wedding party.

‘I’ve also got a great set of friends that I’m very close to. Plus, I don’t have a family or children of my own, so I’m usually available to help.’ Another day, another wedding! Claudette in 2010 with her cousins Stan and Ian – the groom

While she is not interested in getting married herself, she never tires of going to weddings.

Describing Filipino ceremonies, she continued: ‘There’s not really a hen do, as such – more of a going away party the night before.

‘There are also lots of different parts to each wedding, that bridesmaids usually share out between them and help with. You’ll see me do things like lighting candles or putting the veil on the bride.

‘It’s always nice to be invited to a wedding, although, as a bridesmaid, you’re a lot busier than the average guest. Doing it so many times has made me super organised, though. I know exactly what to do.’ 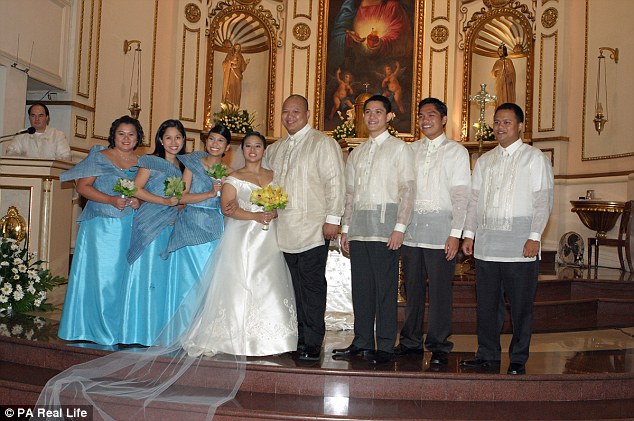 Claudette (left) was a bridesmaid for Frances and Noel, her friends from law school, in 2006

While ‘dressy gowns’ are not something she would choose to wear, Claudette has enjoyed wearing so many different styles over the years.

She added: ‘I’m not a dressy person at all, but they’re always really nicely made. One that stands out is the one I wore to Frances and Noel’s wedding.

‘It was a blue frock, wrapped in pina fibre, which is a traditional material from the Philippines and really luxury.

‘I haven’t paid for any of the dresses. It’s tradition for the bride and groom to buy them, although I’ve been given some lovely gifts over the years, like necklaces, handbags and little trinkets.’ 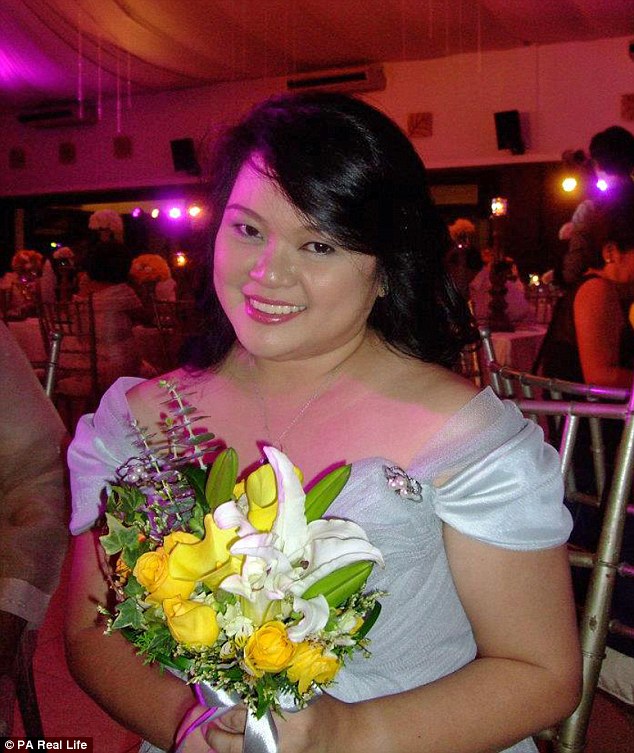 Claudette has fond memories of each wedding, despite them not being without their hiccups.

On one occasion, the ceremony was due to take place on an idyllic Filipino island, but a tropical storm the night before destroyed all the decorations.

She and her fellow bridesmaids had to hurriedly redress the venue on the morning of the wedding, while wearing their lavish gowns.

‘Another time we had to get to the venue by ferry, but could only go so far, before transferring into this tiny little rowing boat, so as not to disturb the coral,’ she laughed. 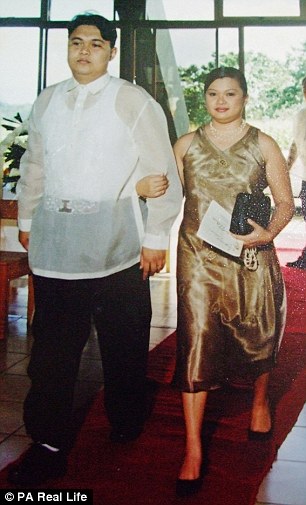 ‘I had all the dresses with me boxed up, so there I was, trying to balance, getting into a tiny boat, holding about 30kg (4st) of gowns above my head.

‘I thought, ‘It doesn’t matter if I fall in – just make sure the dresses are okay.’

Following her next wedding this August, Claudette says she may finally hang up her bridesmaids’ dresses for good.

‘Virtually everyone I know is married now,’ she said. ‘I used to want that for myself, but now I have so much going on in my life without a partner that I’m really happy with how things are.’