When Sione Latu, 19, woke up after surgery for stab wounds to his stomach and neck, his mother told him that must be the end of him playing rugby league.

‘No more, no more,’ she told the western Sydney teenager.

But the brave young man, awake in his hospital bed and extremely lucky to be alive, shook his head and said: ‘I’ll be back’.

The Wentworthville Magpies player and his uncle, Fonongo, 22, were airlifted to hospital, clinging to life, on Sunday morning following a wild park brawl.

His cousin, 16, was also seriously hurt.

Police will allege that a Penrith Brothers player and one of his mates set upon the trio after the final siren, apparently because the rival front-rower was sin-binned over a shoulder-charge.

All three relatives are thankfully safe and well – but the horrific injuries Sione has suffered are a crushing blow to the passionate footy player’s hopes of building a career around his sporting prowess. 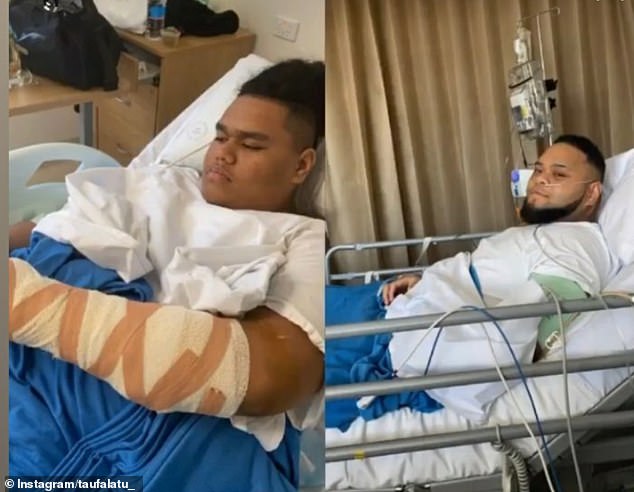 ‘They’re all safe’, relatives of the Latu family celebrated. Above, his young cousin (left) who has been discharged from hospital, and his uncle, Fonongo (right)

A relative said he feared the attack will stop Mr Latu from following his dream of making a career out of his footy.

Meanwhile, doctors have warned the young gun he certainly won’t be taking to the pitch again this year.

A devastated relative said: ‘My family is very humble and didn’t deserve this at all.

‘All (Sione) wanted to do was play rugby and get a career out of it now he can’t.’

Both Sione and his uncle are out of the ‘danger zone’ and are awake, alert and stable, with his young cousin returning home on Tuesday.

Wentworthville Magpies juniors division president Elias Kassab said Sione and his uncle will likely be in hospital for the rest of the week.

‘Definitely (Sione) won’t be able to play football for the rest of the season,’ Mr Kassab said, describing him as a passionate kid with his heart in the right place. 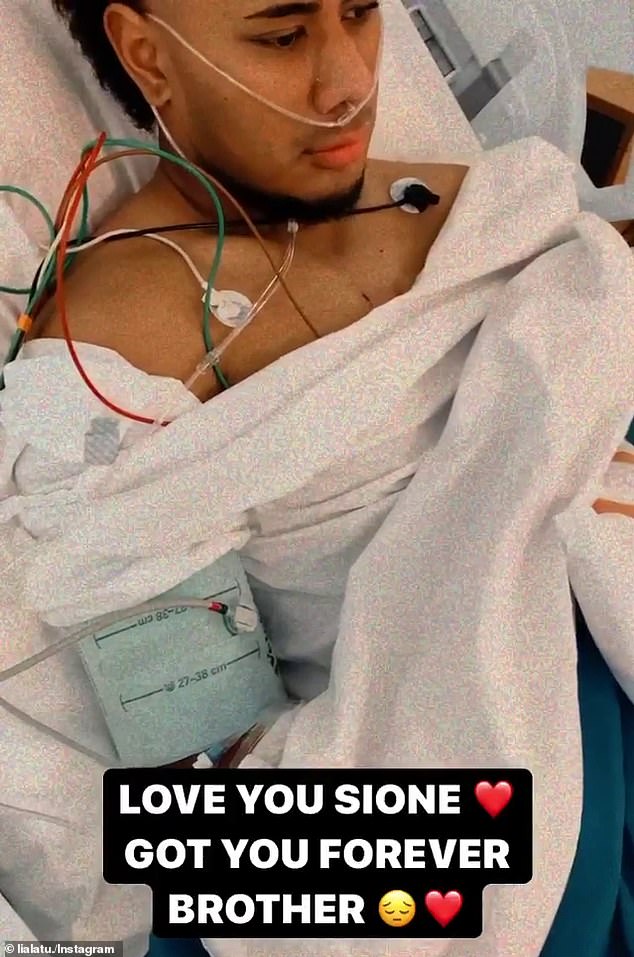 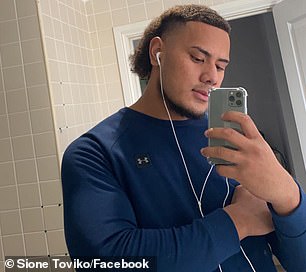 ‘I’ll want it all healed up properly and that, as much as he wants to go back and play.

‘We’ve just got to follow doctors’ orders at this stage.’

But there is no keeping a passionate young man down.

Mr Kassab recalled: ‘Yesterday when he first was able to talk, the first thing mum was asking how is and that was: “I said no more, no more, now, yes?’

‘He turned around and looked at them and said, nah-uh – I’ll be back.

Former Fijian international Ratu Nanovo was charged on Tuesday afternoon with three counts of wound with intent, after two nights in hospital under police guard. He was expected to face court late on Tuesday.

His friend, Penrith Brothers player Bradley Wayne Middlebrook, 20 – the man who was sin-binned – has been charged with affray and assault occasioning bodily harm in company.

In court documents from Middlebrook’s case, police allege Nanovo grabbed a six-inch blade from his car after the final siren, hid it in his pants and called out ‘come here, I’ve got something to show you’ to the men, before allegedly stabbing them.

A police statement of facts read to the court on Monday said: ‘Mr Middlebrook is said to have commenced fighting with one of them, punches were thrown, a brawl erupted, the co-accused got out the knife and stabbed (a man).

‘The accused continued fighting and punching (another man). They then ran to a Toyota Aurion and left the scene.’

Middlebrook was arrested at Penrith Police Station at 8pm on Sunday while reporting for bail on other outstanding charges. 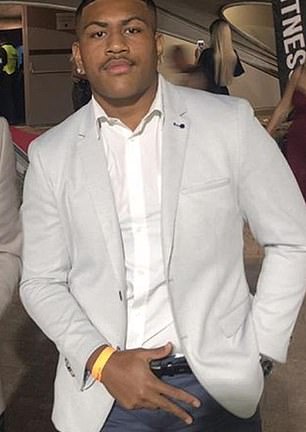 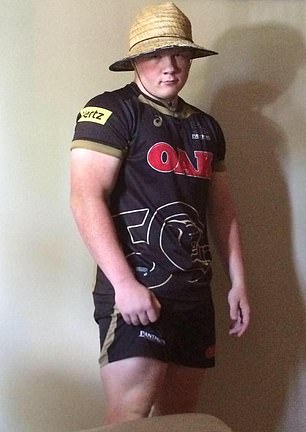 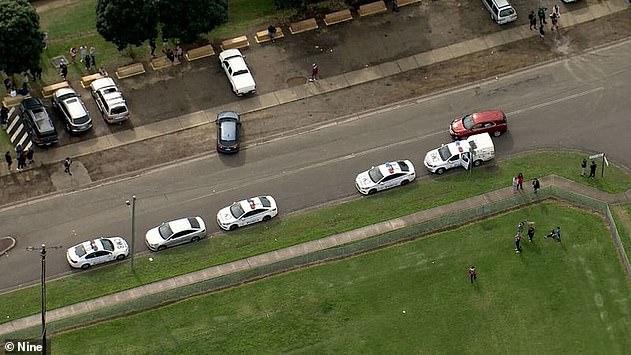 Three men suffered serious injuries after the alleged stabbing attack in North Parramatta in Sydney’s west on Sunday. Aerial photo of scene is above 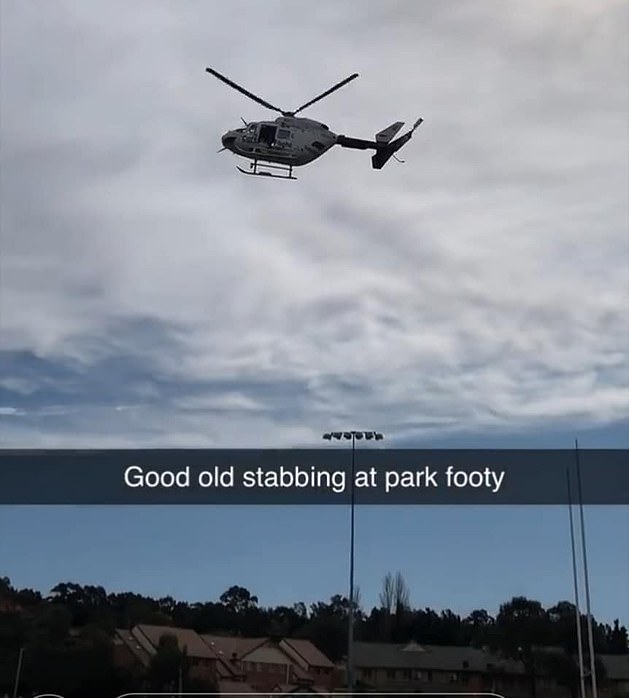 Nanovo had allegedly retrieved a six-inch kitchen knife from his car and concealed it down his pants.

Penrith Local Court heard Nanovo then called out to the alleged victims – Sione Latu, 19, and his cousins Fotongo and Latamu: ‘Come up here I’ve got something to show you’.

Police allege Middlebrook began fighting the men, with punches thrown, and the co-accused getting out a knife and stabbing a man.

The brawl continued in front of spectators and the pair fled, police alleged.

Two men were airlifted to hospital with critical injuries and a third, 16, was seriously injured.

Middlebrook was accused of stabbing a man in the ribs on January 26 this year, a court heard on Monday.

The court heard he is also alleged to have been aggressive toward police on December 31 last year, resulting in him being capsicum sprayed.

Police charge sheets now accuse him of assault occasioning bodily harm against one of the three men, and unlawful violence against all three alleged victims ‘in the company of Ratu Nanovo’.

Mr Johnson said he did not foresee identity being an issue in the case due to the number of eye-witnesses present at the grounds.

But his defence lawyer Ihab Jamal said his client would be raising self-defence as an argument and questioned aspects of the prosecution case.

‘My client says the reason he went past the other football team is that’s where his car was. He had to walk past them to go to his car,’ Mr Jamal said.

‘It appears words have been exchanged… my instructions were he was struck by the other party first.

‘He does have a number of injuries on his face. That corroborates his version he was struck first.’