Veteran newsreader Sir Martyn Lewis — who famously delivered the first bulletin on Princess Diana’s death — has turned his back on the property-owning classes and renounced home ownership.

Sir Martyn, 72, was living in a £4 million period property in Kensington when he decided to downsize with his second wife, vivacious PR executive Patsy Baker. ‘I was going to buy another house but then, I thought, what is the point? The original plan was to downsize, but we got to thinking: “Why are we buying?”

‘So just before Brexit we sold our house. Now I’ve got nothing.’

Sir Martyn has two daughters from his first marriage to former model Liz Carse, who died in 2012 after being struck down with dementia — singer-songwriter, Sylvie, and Katie, who works in TV and film production.

‘I don’t worry about their inheritance,’ he adds. ‘I think I’ve done the right thing. Since Brexit, Central London house prices have dipped about 15 per cent and are falling in value. I got out at the right time and the kids will do better.

‘I’m going away at Easter to Spain and people automatically assumed I had my own villas there, but I am happy to say I don’t own any property anywhere in the world.’

He is aghast at his old employer for encouraging staff to form companies so they could be treated as freelancers, leaving many of them now facing large back-dated tax demands from HMRC.

‘I do think that if the BBC advised these people to set up their own companies, the BBC has an obligation to come up with financial support for them when they’re in trouble because of the BBC advice. I think the BBC should play fair on that.’

Petra steals the show on night out with sister

Divorced F1 heiress Petra Ecclestone, 29, popped out for dinner in a fur coat and a tiny £2,350 diamante Alexandre Vauthier mini dress (pictured, below) that showed off an inordinate amount of her slim frame and long legs.

In contrast sister Tamara, 33, who joined her, sported a demure £5,000 Tom Ford purple dress (pictured, above) at eatery Sumosan Twiga in Knightsbridge.

Might Petra be keen to show her ex-husband James Stunt, who is reportedly romancing actress Samantha Rowley, what he’s missing?

What IS Camilla saying to have Jilly and Prue so agog?

Bonkbuster queen Jilly Cooper was thrilled to be reunited with her old friends the Duchess of Cornwall, 70, and Great British Bake Off judge Prue Leith, 78, at the National Literacy Trust’s 25th anniversary in London this week.

Jilly, 81, who looked elegant in a white frilly blouse and pearls, tells me: ‘Prue is a very old friend, but I hadn’t seen her for 20 years.

‘It was heaven to see her. We used to be great friends but we drifted apart because of work. Camilla’s a great friend, although I hadn’t seen her since Cheltenham last year. 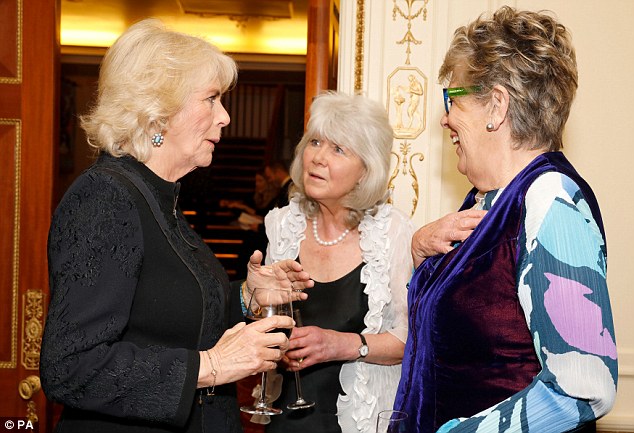 Jilly Cooper was thrilled to be reunited with her old friends the Duchess of Cornwall, 70, and Great British Bake Off judge Prue Leith

‘We both told Prue how thrilled we were about her being on Bake Off. Camilla loves it.’

Later on, Camilla asked for book suggestions before she flies to Australia next month. ‘I didn’t have any recommendations for her —how terrible,’ adds Jilly. ‘But you know what these parties are like — so frantic.’ 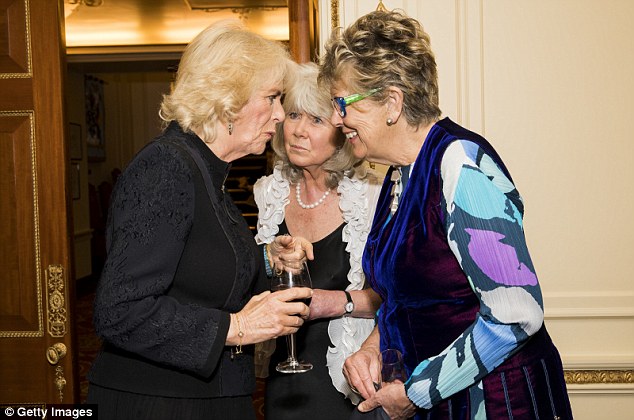 Blackadder star Sir Tony Robinson, 71, is taking special measures to keep up with his wife Louise, 35 years his junior. 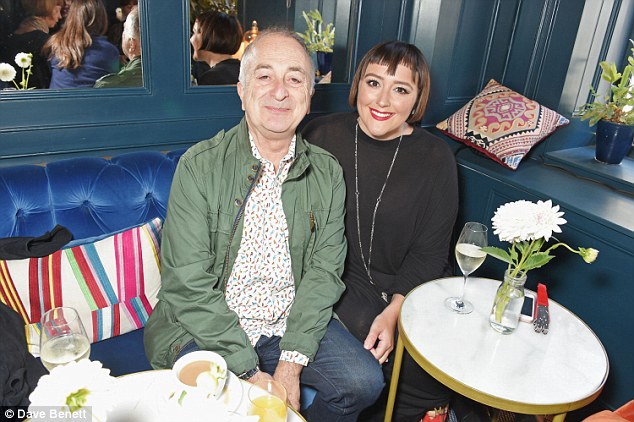 Sir Tony Robinson revealed he has starting using skin products to keep up with his younger wife, Louise (pictured)

‘I’ve started using skin products now because Louise has taught me how important it is,’ he tells me. ‘I don’t know which brand though — you’d have to ask the missus!’ Robinson, Baldrick in the BBC comedy, wed artist Louise Hobbs in 2011 after a chance meeting in a restaurant.

‘Also there’s never any make-up input on TV any more,’ he adds at the Perfumer’s Story x Aures London party at Sensorium in Waterloo. ‘So if the picture’s sharp, you look like you’re from Night Of The Living Dead.’