Philip Green trudges across the airport tarmac with his phone glued to his ear. The under-fire fashion boss has denied any claims of misconduct

Under-fire fashion mogul Sir Philip Green is pictured being given a warm reception from an air stewardness as he boards a plane back to Britain amid a number of ‘MeToo’ allegations made against him.

The beleaguered  billionaire, was unmasked in Parliament last Thursday as the businessman who gagged the press over claims of racism and sexual harassment.

Sir Philip has been spending time in a luxury spa in sunny Arizona this week, but looks to be heading back to Britain to face the music.

The 66-year-old- who is fighting for his reputation and battling to keep hold of his knighthood – can be seen striding towards the plane with his phone glued to his ear, deep in conversation.

As he climbs the steps to his private jet he is given a welcoming smile from the air stewardess, who he promptly hugs and gives a kiss on the cheek.

When he lands on British soil, the chairman of the Topshop fashion empire will have to face the fallout from the allegations made against him.

Among some of the serious claims put to him include Sir Philip calling women ‘sweetheart’, ‘darling’ or love’ instead of their names and also calling other female employees overweight. 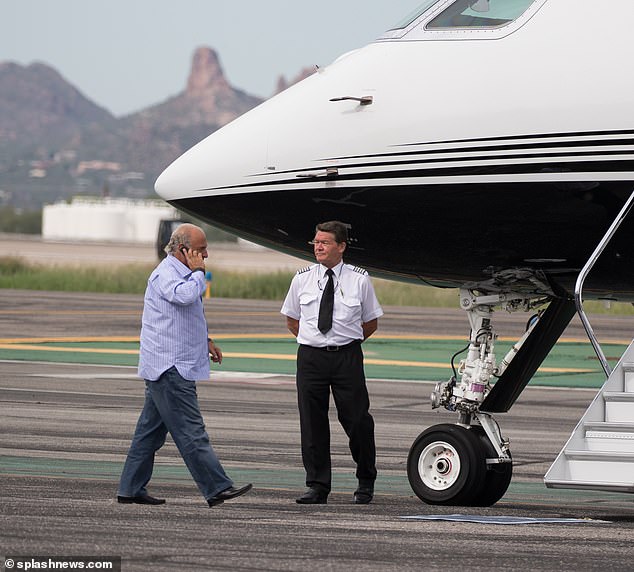 Philip Green striding across the runway while a member of staff waits by the aircraft. He is facing a battle salvage the reputation 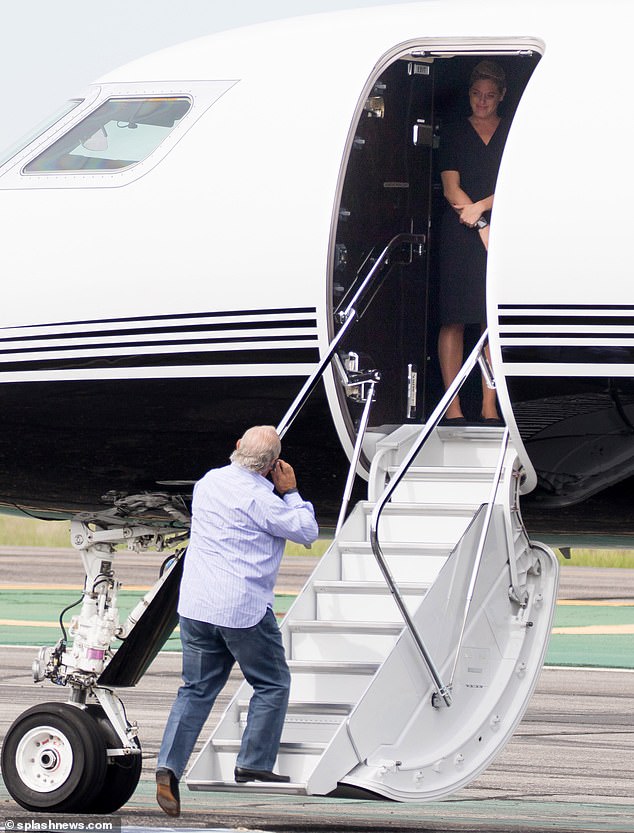 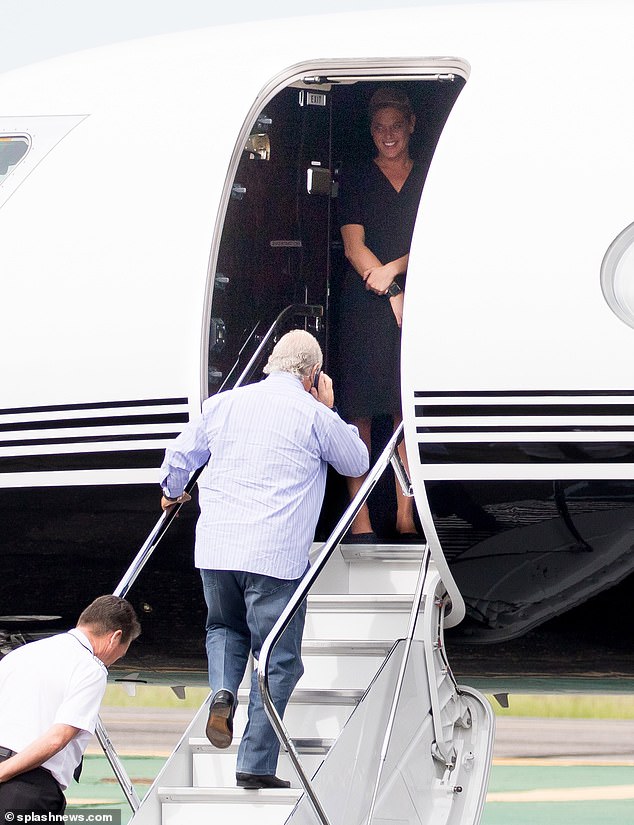 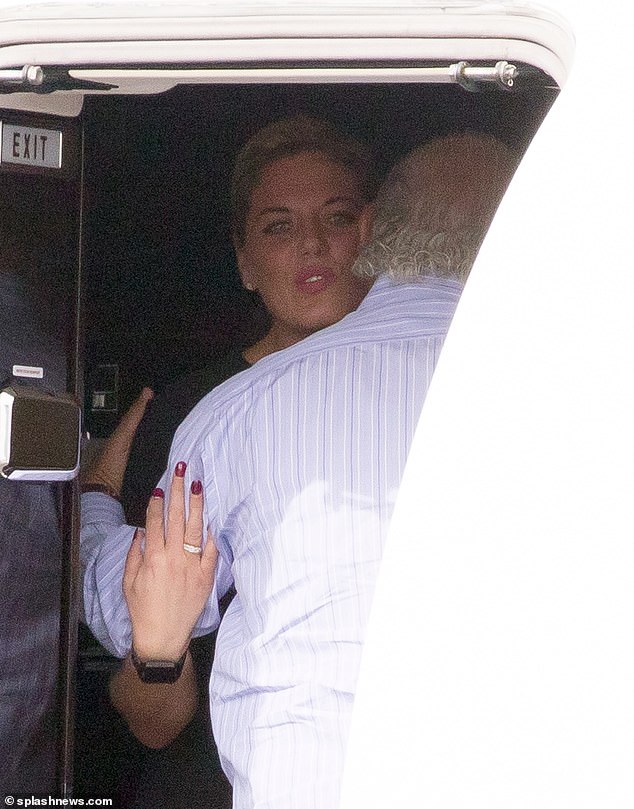 Philip Green leans in and gives the air stewardess a kiss on the check before heading for his seat and departing from arid desert state Arizona, where he has been staying at a spa

He is also alleged to have crept up behind women in the corridors and touching staff members awkwardly.

The 66-year-old is also alleged to have gone into meeting and asked if there were any ‘naughty girls’ that ‘needed their bottoms slapped’ and cut a female executive’s hair during a meeting. 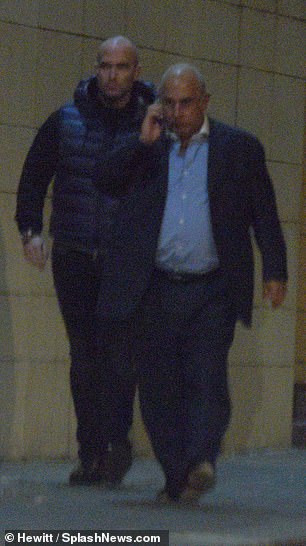 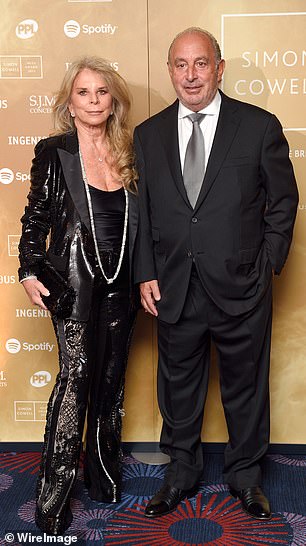 Sir Philip Green, pictured in Mayfair earlier this month (left) and (right) with his wife Tina 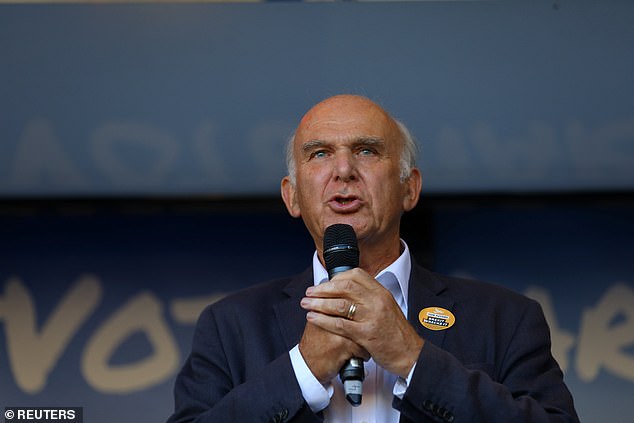 Lib Dem leader Sir Vince Cable (pictured at  Brexit demonstration), said the Topshop mogul only narrowly escaped losing his honour after being caught up in the BHS pensions scandal two years ago 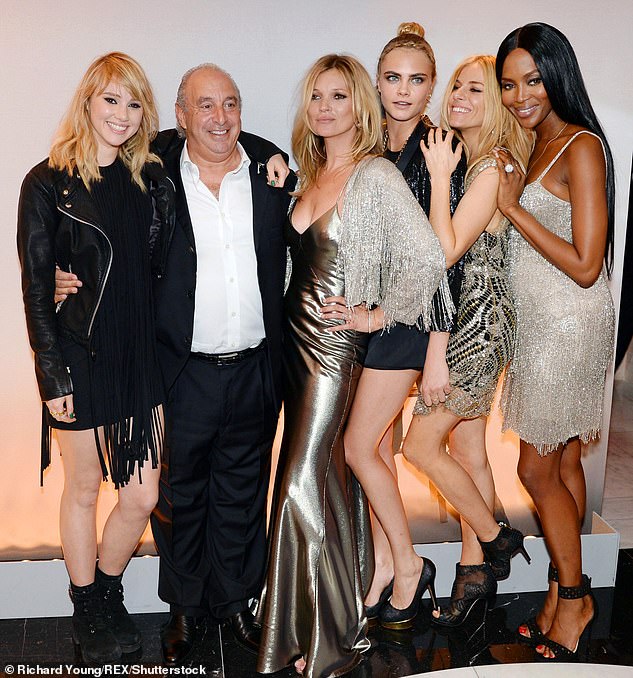 Sir Philip with top models in 2014. There is no suggestion that anyone pictured is involved in any of the allegations against him

In a bombshell statement in the House of Lords, Labour party peer Lord Hain said it was ‘clearly in the public interest’ that the allegations were aired.

He said the case involved ‘substantial payments to conceal the truth about serious and repeated sexual harassment, racist abuse and bullying which is compulsively continuing’.

Earlier this week in Arizona the businessman launched a furious rant at reporters who found his hideaway.

How could Philip Green be stripped of his knighthood?

The naming of Sir Philip Green as behind an injunction covering up alleged sexual and racial harassment will – although this does not mean that any wrong-doing is proved against him – refuel claims he should lose his knighthood.

A political storm raged over the honour around the time of the BHS collapse.

Sir Philip can only be stripped of the gong by the Honours Forfeiture Committee.

It is a secretive Whitehall panel that meets to consider whether people should be stripped of their honour.

In the past it has cancelled honours of convicted criminals like Rolf Harris and more controversially people who, whilst they have not been convicted of any crime, have been harshly criticised like ex-RBS boss Fred Goodwin.

The Committee, which normally conducts its business by correspondence, considers cases where an individual who has been honoured is judged to have brought the honours system into disrepute.

It usually looks at people who have been sentenced to a term of imprisonment of three months or more, or have been censured or struck off by the relevant professional or other regulatory authority.

The Committee is not restricted to these two criteria, and if there is other compelling evidence that an individual has brought the honours system into disrepute, then it is open to the Committee to consider such cases as well.

He hit out at the journalists over their ‘manners’ and said their behaviour would lead to a ‘very ugly place’.

The media mogul eventually seemed to calm down, before saying: ‘Let the legal process take its course.’

‘I am not commenting on anything that has happened in court or was said in Parliament today,’ he said.

‘To the extent that it is suggested that I have been guilty of unlawful sexual or racist behaviour, I categorically and wholly deny these allegations.’

The statement added that like all large companies, his operations ‘sometimes receives formal complaints from employees’ and settles them confidentially.

The revelation in Parliament leaves the Topshop, Burtons and Dorothy Perkins boss, who spent decades amassing a huge fortune, fighting for his reputation and battling to keep hold of his knighthood.

Lib Dem leader Sir Vince Cable said the Topshop mogul only narrowly escaped losing his honour after being caught up in the BHS pensions scandal two years ago.

And he said that if the allegations that Sir Philip sexually harassed and bullied staff are true then he must finally be stripped of the gong.

Sir Vince told MailOnline: ‘He narrowly and luckily escaped losing his knighthood over the pensions scandal.

‘If these allegations are correct, he should certainly be stripped of his knighthood.’

Sir Philip has not been found guilty of any wrongdoing in a court or tribunal.

‘Given this non-disclosure payments story and his part in the BHS pensions scandal I’d bet good money ‘Sir’ won’t be part of his title for much longer.’

In a message on Twitter he said: ‘My friend Peter Hain just done great public service in the House of Lords naming Sir Philip Green as behind the injunctions against the Daily Telegraph preventing them reporting serious allegations.’

And Frank Field, chairman of the Work and pensions select committee and a long-time critic of Sir Philip, called for reform of Parliament to make it easier to report abuse.

He said: ‘I have been talking this evening with somebody who witnessed grotesque bullying at work. They would like for what they witnessed to be shared, through the House of Commons, with the nation.

‘I am seeking to raise urgently with the Government the importance of having a mechanism in Parliament through which the voices of victims of abuse can be heard.

‘This would develop the role of the House of Commons in a way which stands up for people who have little money, against those who have much.’