A former Topshop brand director has claimed that Sir Philip Green ‘was a bully worse than most bosses’ and she was forced to protect her staff from him.

Jane Sheperdson was one of the high street chain’s most senior employees between 2002 and 2006, and says the billionaire, 66, ‘knew very little about fashion’ when she worked there.

She claims the retail tycoon did not bully her, but he would often get ‘very aggressive and shout a lot’ at other members of staff.

Speaking to the Daily Telegraph at a women’s business summit today, she said: ‘He was a dealer, he wasn’t a great retailer in any sense, and knew very little about fashion.

She said that she felt it was her ‘duty’ to protect her colleagues from Sir Philip’s outbursts and that there was ‘no way I would have exposed them to the way he ran his business’.

The fashion empress added: ‘There was an awful lot of bullying and I think there still is. I think it’s become acceptable in the fashion industry in a way it shouldn’t be. But I think his behaviour was worse than most.’

The retail mogul clashed with Ms Sheperdson in November 2003 when Drapers magazine ranked her higher than him in a list of the most influential people in the fashion industry.

The Sun reported that Sir Philip rang editor Eric Musgrave and said: ‘You’ve caused me a lot of f****** problems. Her head’ll be even f****** bigger than it is already.’

There were claims at the time that Ms Sheperdson hadn’t been consulted over Moss being brought on board, which she denied.

Her relationship with Sir Philip was described as ‘sparky’, but she said it was ‘her time to go’.

She bought shares in Whistles in 2008 and was appointed chief executive.

Ms Sheperdson (pictured left) claims the retail tycoon (right) did not bully her, but he would often get ‘very aggressive and shout a lot’ at other members of staff 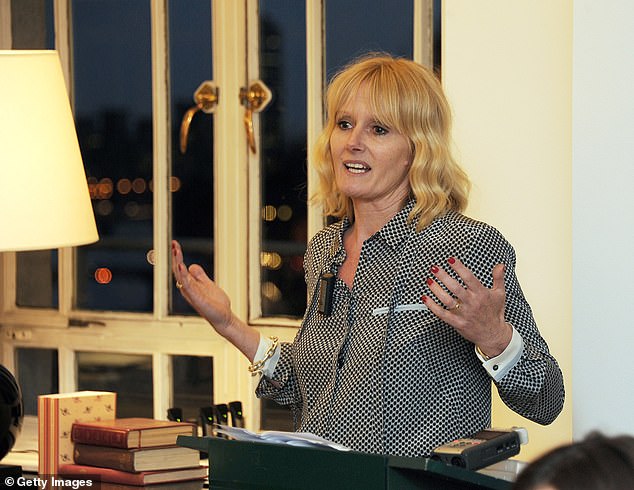 Jane Sheperdson is pictured at an event for Whistles in April 2012, where she has been chief executive since 2008

Ms Sheperdson’s claims come after Topshop designer Michael Halpern quit over the sexual harassment and racist allegations made against Sir Philip this month.

The billionaire Arcadia group owner bagged a High Court injunction and got complainants to sign controversial Non Disclosure Agreements (NDAS) in a bid to silence their claims – but he was outed in the House of Lords by peer Peter Hain.

Michael Halpern is said to have withdrawn, abandoning the launch of the latest collection, after Sir Philip was unmasked as the businessman who gagged the press over claims of racism and sexual harassment.

It was announced in August that London-based Halpern would work with Topshop on the 28-item collection, which is due in stores next month.

But a fashion source told The Daily Telegraph: ‘His brand is about female empowerment. That’s his ethos. He couldn’t go ahead with this — it wouldn’t be a good look.’

The collection launch has now been cancelled, it emerged today. Michael Halpern (left, with Mary Katrantzou Harper’s Bazaar Women of the Year Awards on October 30) is said to have withdrawn after Sir Philip, the chain’s billionaire boss, (right, yesterday) was unmasked as the businessman who gagged the press

Sir Philip has been spending time in a luxury spa in sunny Arizona this week, but looks to be heading back to Britain to face the music.

The 66-year-old, who is fighting for his reputation and battling to keep hold of his knighthood – was pictured yesterday striding towards the plane with his phone glued to his ear, deep in conversation.

As he climbed the steps to his private jet he was given a welcoming smile from the air stewardess, who he promptly hugged and kissed on the cheek.

When he lands on British soil, Sir Philip will have to face the fallout from the allegations made against him.

Among some of the most serious claims put to him are that Sir Philip allegedly crept up behind women in the corridors and touched staff members awkwardly.

He is also alleged to have gone into meeting and asked if there were any ‘naughty girls’ that ‘needed their bottoms slapped’ and cut a female executive’s hair during a meeting. Sir Philip with top models in 2014. There is no suggestion that anyone pictured is involved in any of the allegations against him