Sir Rod Stewart was seen poking fun at the government’s decision to enforce quarantine for holiday-makers in France on their return to the UK – even if they are double vaccinated.

The Maggie May hit-maker, 76, vented his frustration via his Instagram story on Sunday as he caught up on the latest travel advice while reading his copy of The Daily Mail.

Reacting to its front page news revealing that 10-day quarantine will still apply to anyone travelling back from France – despite amber listed countries not being required to isolate – Rod joked: ‘Another fine mess.’

‘Fine mess’: Sir Rod Stewart was seen poking fun at the government’s decision to enforce quarantine for holiday-makers in France on their return to the UK while reading The Daily Mail

Rod, who was sporting a pink and red floral shirt, playfully peered over the top of his paper – letting its front page take centre stage.

Health Secretary Sajid Javid confirmed that those travelling back from France, which is currently an amber listed country, will have to complete a compulsory 10 days in isolation on their return to England.

Quarantine will still apply to those that have received both doses of their Covid vaccine. 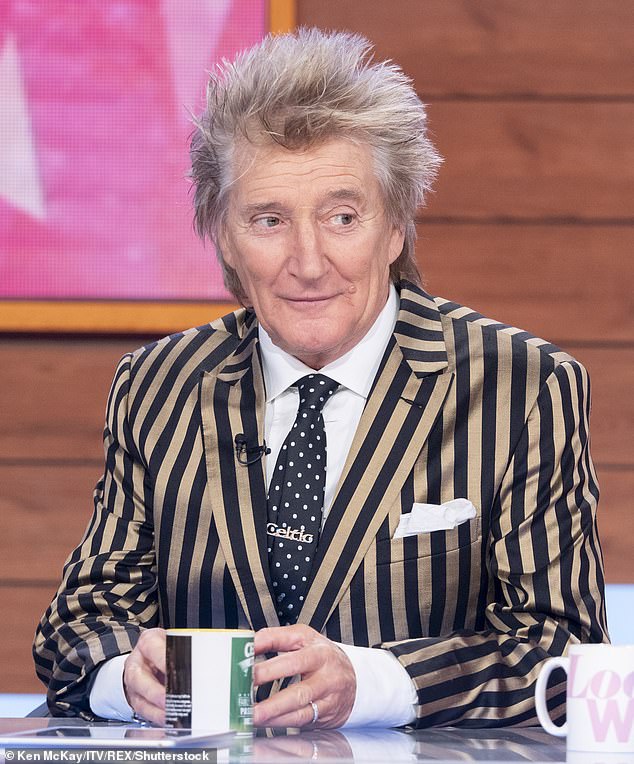 Poking fun: The legendary singer, 76, is currently holidaying in France and reacted to the changes to restrictions via his Instagram story on Sunday

The easing of isolation on returning to the UK for all other amber list countries will not apply to France as of Monday (Freedom Day) due to ‘persistent’ cases of the Beta variant of coronavirus.

Anyone who has been holidaying in France in the last 10 days will be required to isolate and take a test on day two and day eight of their quarantine period.

The confirmation came as Monday saw legal restrictions lifted across the country, with face masks no longer mandatory, social distancing scrapped and the rule of six, or caps on groups in bars and restaurants, wedding venues and sporting stadiums no longer required.

All businesses that were ordered to close over lockdown can now reopen, including nightclubs. 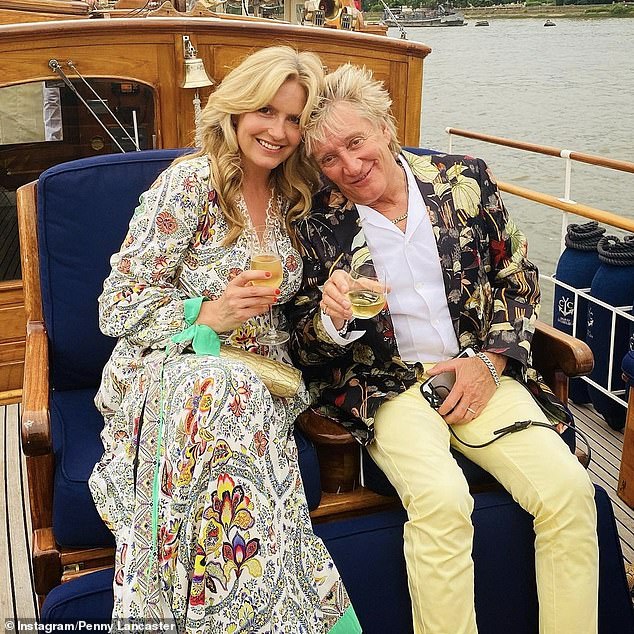 Loved-up: Prior to heading to France, Rod celebrated his 14th wedding anniversary with wife Penny Lancaster, 50, by enjoying a romantic boat trip on the River Thames

Travel rules, however, remain in place – for arrivals from any other amber list countries, including Portugal, Cyprus and Sweden, they will no longer need to quarantine if they have been fully vaccinated and are under 18.

Those who haven’t been fully vaccinated will be required to quarantine.

For red list countries, travel is still prohibited and those returning to the UK are required to book a managed hotel to quarantine for 10 days.

Green list countries, including Australia, New Zealand, Croatia and Iceland, do not require those returning to quarantine – but a test is required before or on day two after your arrival into the UK.

Rod was one of the first to offer to volunteer to have the coronavirus vaccine, before it had been rolled out across the country. 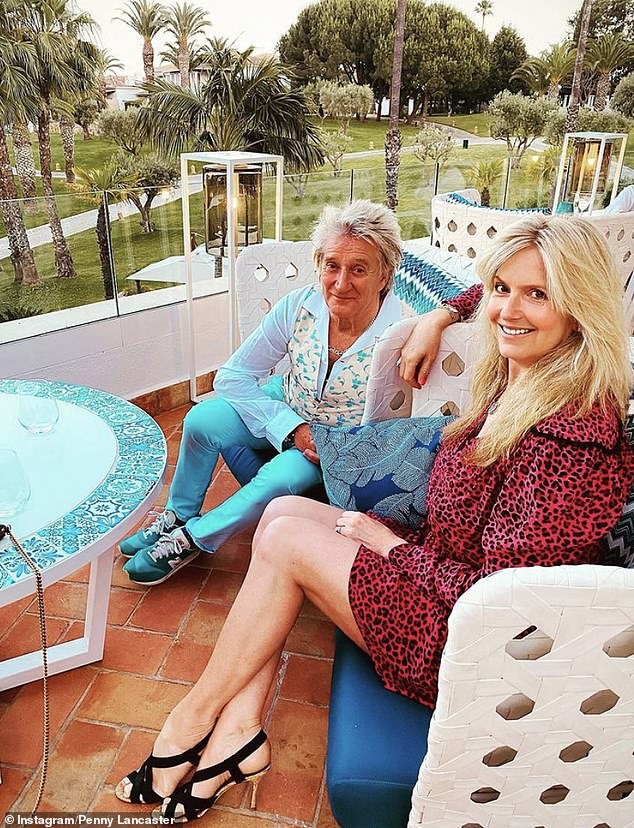 Sun-seekers: The couple previously enjoyed a romantic break to Portugal after chartering a private jet to head to an exclusive resort in the Algarve for some ‘time alone’

The legendary singer told Piers Morgan he’d happily have the jab if it would help to settle others who had doubts over having it done.

Prior to leaving Good Morning Britain, Piers revealed on air in December last year: ‘I had an email yesterday actually from Sir Rod Stewart offering his services if we were looking for people to do it, and he was just doing it as a public spirited gesture.

‘His wife had mentioned that we had been talking to Matt Hancock about it and he said, “Look, if you think it would help, I would happily volunteer.” I thought that was great.’

Piers shared at the time: ‘ I think the more very famous people, who have a lot of fans and a lot of followers, the more they are seen to take it… people will think, “if they’re taking it then I feel better.”‘

Since then, it’s been reported over 82.3million in the UK have been vaccinated, with 54 per cent of people now fully vaccinated after having had their second dose.

Prior to his trip to France, Rod was seen celebrating his 14th wedding anniversary with wife Penny Lancaster, 50. 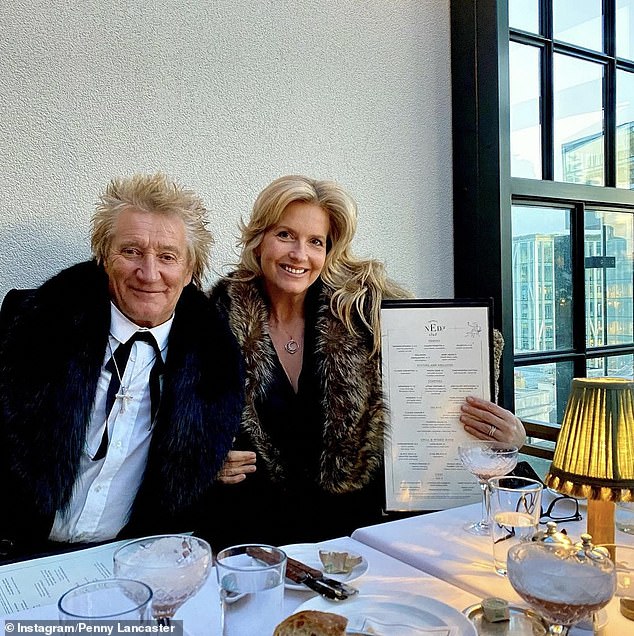 On the mend: Rod has been recovering from knee surgery after years of playing football took a toll on his body – he previously underwent £8k ankle fusion surgery and full knee replacement

The pair marked the milestone by enjoying a romantic boat trip along the River Thames.

It came a month after the couple chartered a private jet to fly to Portugal for a loved-up getaway in May at an exclusive resort in the Algarve.

At the time, Penny told fans on Instagram that the break was ‘time alone and time to reflect’ for the couple.

Rod, meanwhile, has slowly been recovering from knee surgery after years of playing football took a toll on his body. The hitmaker recently endured a £8,000 ankle fusion surgery and a full knee replacement.

Speaking to The Scottish Sun after appearing on crutches during wife Penny Lancaster’s Lorraine interview he said: ‘My football days are over.

‘I have a bad ankle injury which I suffered from being tackled by my 15-year-old son. I can still kick a ball when needed though.’ 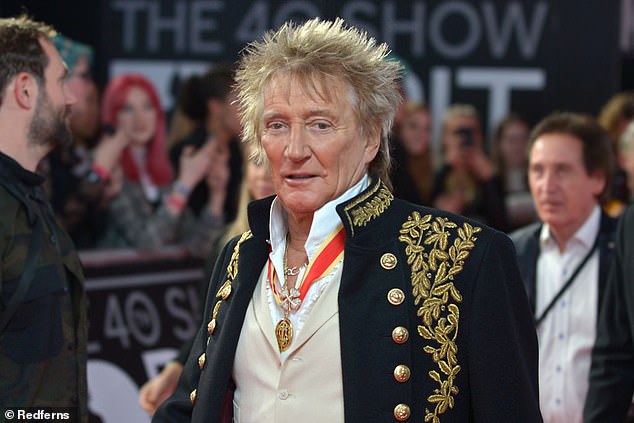 Long behind him: Rod has said while he can ‘still kick a ball when needed’ his footballing days are well and truly behind him thanks to his injuries