Sir Tim Berners-Lee to Mark Zuckerberg: ‘You can fix this’

Facebook founder and CEO Mark Zuckerberg has at least one person in his corner amid the company’s massive data row.

Sir Tim Berners-Lee, the inventor of the World Wide Web, expressed sympathy for the Facebook boss, but believes Zuckerberg can still fix things.

In a series of tweets, Berners-Lee said he believes Zuckerberg is likely ‘devastated that his creation has been abused and misused.’

The comments come just hours after Zuckerberg appeared on US television to discuss Facebook’s ongoing privacy scandal, which led to 50 million members’ data being harvested without their knowledge.

In a series of tweets, web inventor Sir Tim Berners-Lee (pictured) spoke out about Facebook’s data scandal, which led to 50 million members’ data being harvested without their knowledge

Zuckerberg apologized for the ‘major breach of trust’ and outlined several steps Facebook would take to make sure it doesn’t happen again.

Berners-Lee expressed his own ideas for what needs to be done to make the internet safer, while also acknowledging the gravity of the situation.

‘This is a serious moment for the web’s future,’ Berners-Lee said.

‘But I want us to remain hopeful.’

‘The problems we see today are bugs in the system. Bugs can cause damage, but bugs are created by people and can be fixed by people,’ he explained.

To prevent future misuses of data, Berners-Lee said it will require more responsibility on the behalf of tech giants, researchers, governments and other parties.

At the same time, he said web users must become empowered and advocate for the internet they wish to see. 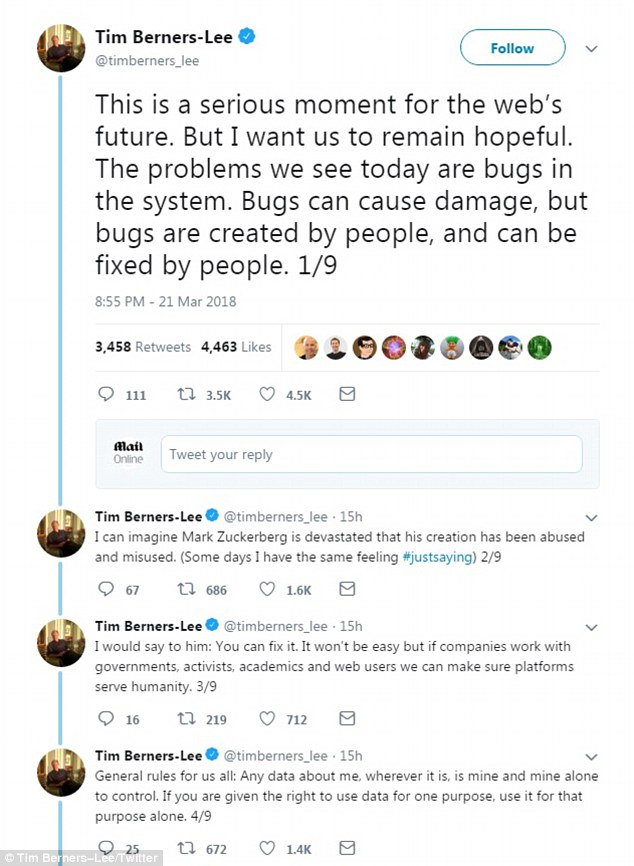 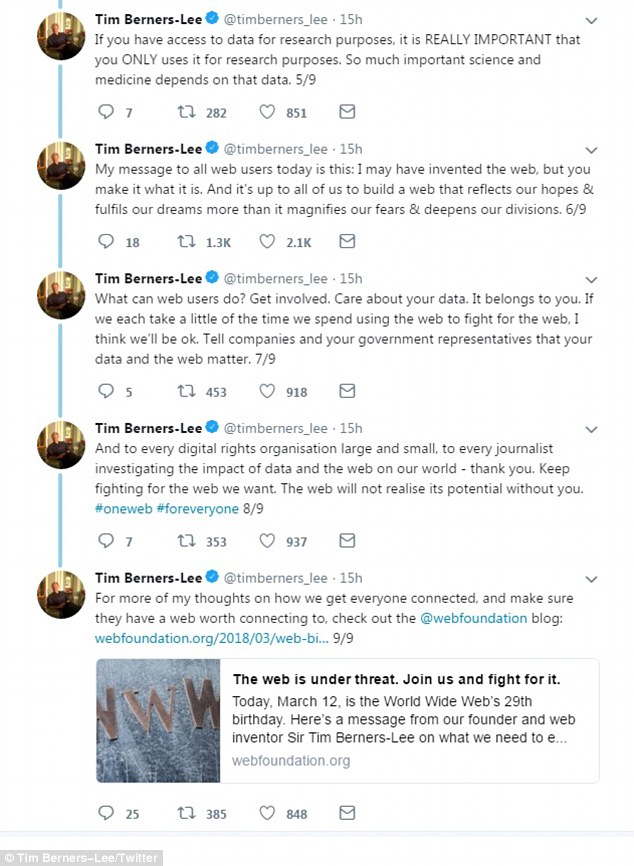 The famed computer scientist also said users should speak to their local representatives and inform them that their data matters.

In the wake of Facebook’s data harvesting scandal, the public discourse has zeroed in on the possibility of regulating big tech and how it manages user data, as well as the lack of transparency around online advertising.

Zuckerberg suggested in his televised interview that he’d be open to some kind of regulation.

‘I am actually not sure we shouldn’t be regulated,’ the Facebook boss explained.

‘I think the question is more what is the right regulation rather than ‘yes or no should we be regulated?,’ he added.

Berners-Lee suggested that users reclaim some control over their own data.

‘General rules for all: any data about me, wherever it is, is mine and mine alone to control,’ he said.

‘If you are given the right to use data for one purpose, use it for that purpose alone’

He went to say that if researchers are given access to certain user data, it is ‘really important’ to use it solely for research purposes. 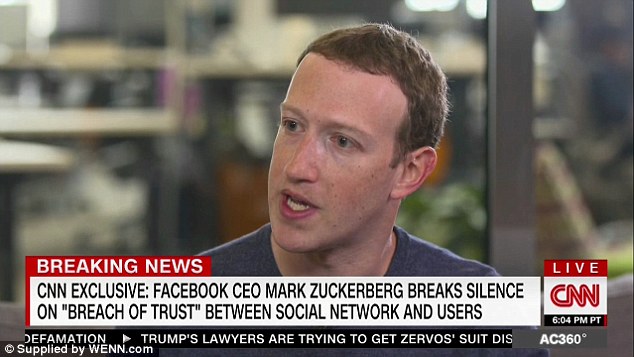 Facebook CEO Mark Zuckerberg (pictured) appeared on US television on Wednesday night to discuss his company’s massive data scandal, saying he was ‘really sorry’ for what happened

Earlier on Wednesday, Zuckerberg published a lengthy post on his personal Facebook describing the timeline of events that led to the ‘massive breach of trust’

The comment seemed to be an apparent reference to the actions of Aleksandr Kogan, a psychology researcher at Cambridge University, who designed a ‘personality quiz’ app as a research project.

He passed the data to Cambridge Analytica, a British data firm, whose boss Alexander Nix was suspended on Tuesday after Channel 4 broadcast footage of him bragging about the firm’s role in Donald Trump’s campaign.

Kogan, who gathered the data by running a survey app on Facebook, also said that he was being made a scapegoat by Facebook and Cambridge Analytica.

In response to the scandal, Facebook has said it will crack down on ‘abusive apps,’ like the one Kogan created.

Zuckerberg said the firm will conduct an investigation of apps that had greater access to information prior to the more recent limitations, which were rolled out in 2014.

Berners-Lee noted in an interview on Channel 4 that Facebook and other tech firms need to be more cognizant of ‘what people are building’ on the internet. 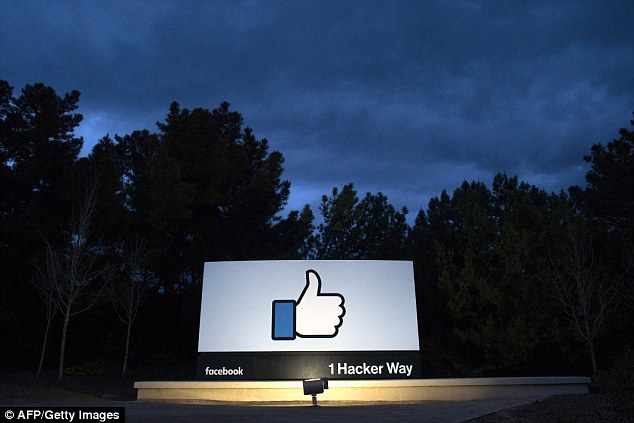 In response to the scandal, Facebook has said it will crack down on ‘abusive apps’ that brazenly share users private information without their knowledge

He said: ‘Look at the systems people are using, like the social networks, and look at are they actually helping humanity?’

‘Are they constructive or are they being destructive?’

When asked whether we can still reign in Silicon Valley giants given how big they’ve gotten, he said he still thinks it’s possible.

‘To a certain extent the genie is out of the bottle,’ Berners-Lee explained.

However, Berners-Lee believes there need to be some limitations over how people handle users’ personal information in the future.

‘You, as my friend can’t give away my data,’ Berners-Lee said on Channel 4.

‘That, in this situation, would have made a big difference,’ he added.

HOW CAN YOU STOP FACEBOOK ‘VAMPIRE’ APPS FROM HARVESTING YOUR DATA?

One way to try and ensure that your data stays private is to request that your Facebook account be deleted, but that doesn’t necessarily protect information you have already supplied.

Many users are willing to trade off the risk of supplying their data for the convenience of staying connected to friends and others on the social network.

So what can you do to protect your data if you want to stay on Facebook?

To begin, visit the settings area of Facebook found via the drop-down arrow in the top right-hand corner of your profile page on the desktop version of the site.

Then click on the apps tab on the left of the page and click ‘show all’ at the bottom, then you can see, edit, and remove all the apps you’ve ‘consented’ to track your account.

Now, a likely vast list of all apps that can access and view your own personal data will be revealed.

To edit or remove these apps from your list of permitted platforms, simply hover the mouse over one of the options.

For each app that has access to the data, users can go in and customise what permissions are granted to each app.

For example, many apps use friends list information, profile information and  sometimes even work and educational history.

Most will already know your email and have access to any information on your profile.

To restrict access, there is a blue tick option on the right-hand side of different permissions such as email, profile picture, education etc.

Apps can make some permissions compulsory and these cannot be unchecked and appear as a faded out blue.

If this makes you uncomfortable then the only way to restrict this data reaching that specific company is to click the ‘X’ and remove the app.

Users can make a judgement call on the optional pieces of information too and customise the data that is shared.

To change the data permissions for all of the apps is time consuming, but it is the only way to gain control over the free distribution of personal data.

By scrolling further down the Settings>Apps window there are other options to further customise who can view personal data.

At this point, it is important to remember that all previous apps were, at some point, granted permission by the user to access their data.

Under the ‘Apps Others Use’ tab, this gets taken out of the user’s hands.

Here, it shows all the data available for Facebook friends to see.

Whilst there may be no issue with this being shared with friends and acquaintances on the social media platform, that data is also being seen by the apps your friends use.

These will include apps that a user did not individually grant permission to.

Here, a checklist of options will appear when selected, and users can customise and restrict what non-authorised third-party apps can view.