The sister-in-law of a woman who was murdered by her abusive ex-partner ten years ago still fears for domestic abuse victims as lockdown measures begin to be lifted.

Pregnant Rachael Slack, 38, from Holbrook in Derbyshire, was murdered by her ex-partner, Andrew Cairns, 44, along with their 23-month-old son, Auden, in June 2010.

During the horrific assault, Cairns stabbed Rachael and Auden a total of 48 times, before turning the knife on himself.

Although the police had deemed Rachael at ‘high risk of homicide’, she was never told this information.

For Rachael’s family, including her mother Jean Slack, 87, her brother Hayden, 62, and sister-in-law Melony, 58, who lives in Berkshire, the Covid-19 pandemic has only intensified their pain.

Pregnant Rachael Slack (pictured) , 38, from Holbrook in Derbyshire, was murdered by her ex-partner, Andrew Cairns, 44, along with their 23-month-old son, Auden, in June 2010 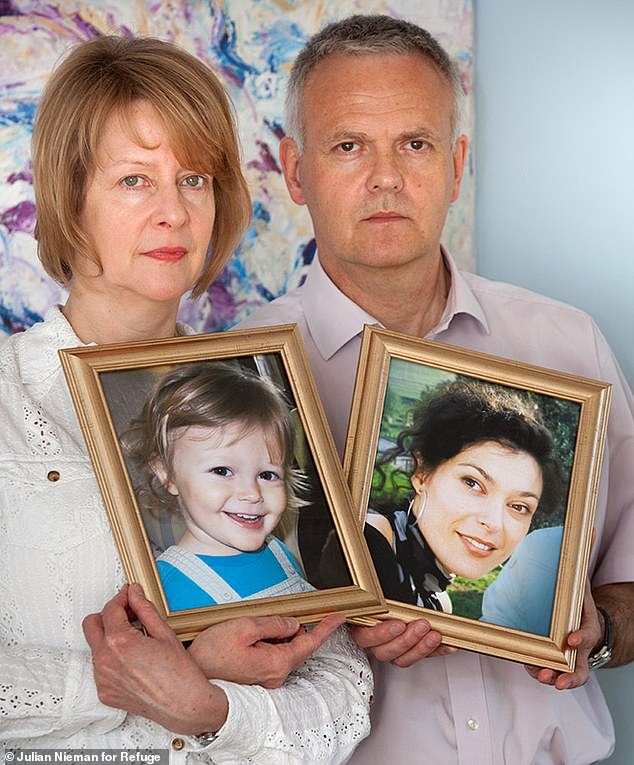 For brother Hayden, 62, and sister-in-law Melony, 58, (both pictured) who lives in Berkshire, the Covid-19 pandemic has only intensified their pain

‘Nothing can prepare you for a tragedy like this,’ Melony told FEMAIL. ‘It feels like you’re experiencing post-traumatic stress disorder. We hate the phrase ‘lessons have been learned’ – because tragedies like this keep happening.

‘Rachael paid the ultimate price and we still feel guilty that we didn’t recognise the warning signs of domestic abuse.

‘Seeing the number of women who need support at the moment has brought all those memories back. Because of social distancing, it will also be harder for us to be together as a family to support each other on the anniversary of Rachael and Auden’s deaths.’

Two women in England and Wales are killed by a current or former partner every week, and new figures from The Counting Dead Women Project show there were 32 suspected domestic abuse killings between the beginning of lockdown and May 17. 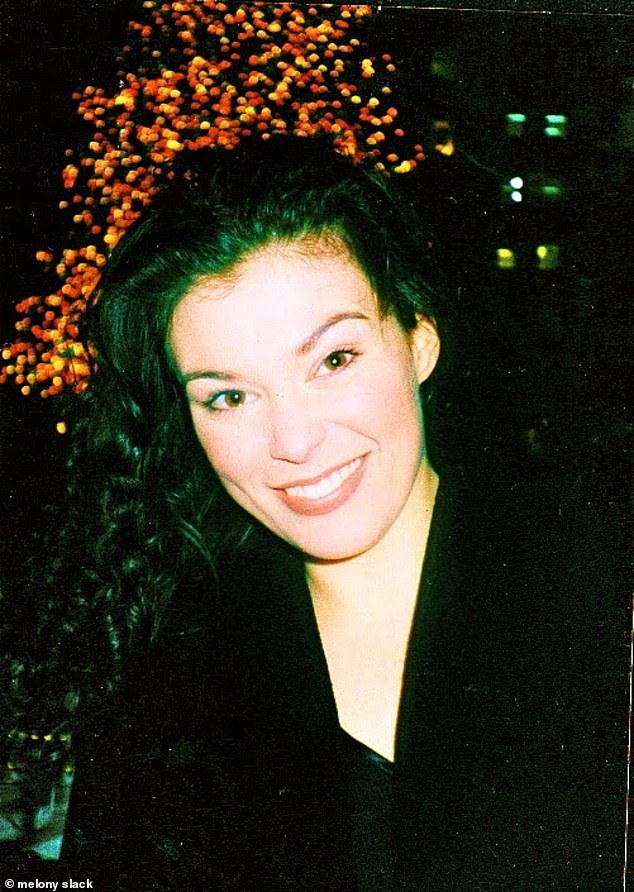 During the horrific assault, Cairns stabbed Rachael and Auden a total of 48 times, before turning the knife on himself 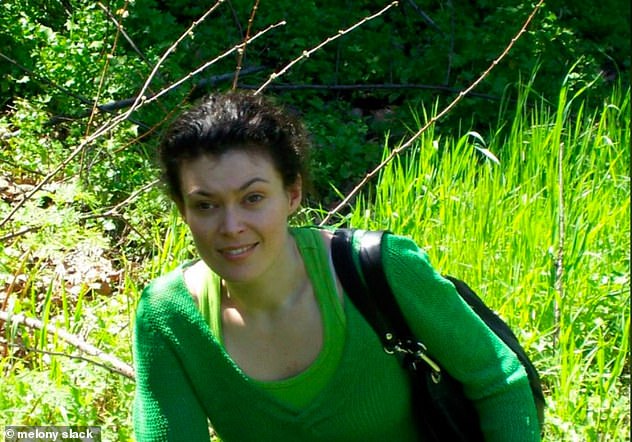 Rachael, a talented artist, first met Andrew Cairns at an art gallery in Spain. They returned to the UK and Rachael later gave birth to their son, Auden

In the last few weeks, the national domestic abuse charity Refuge has seen a 66% rise in calls and contacts to its National Domestic Abuse Helpline, and a staggering increase of 950% in visits to its Helpline website.

The charity says that while lockdown is not a cause of domestic abuse, it can ‘aggravate pre-existing behaviours’ in abusive partners.

Rachael, a talented artist, first met Andrew Cairns at an art gallery in Spain. After returning to the UK, Rachael gave birth to their son, Auden, in 2008.

However, as their relationship broke down, Cairns became controlling. He was diagnosed with depression and began to emotionally and psychologically abuse Rachael. 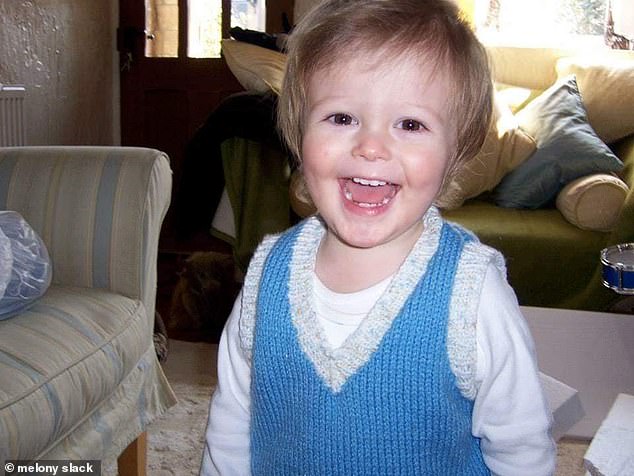 Despite his controlling behaviour, Rachael still wanted father Andrew to be a part of Auden’s (pictured) life 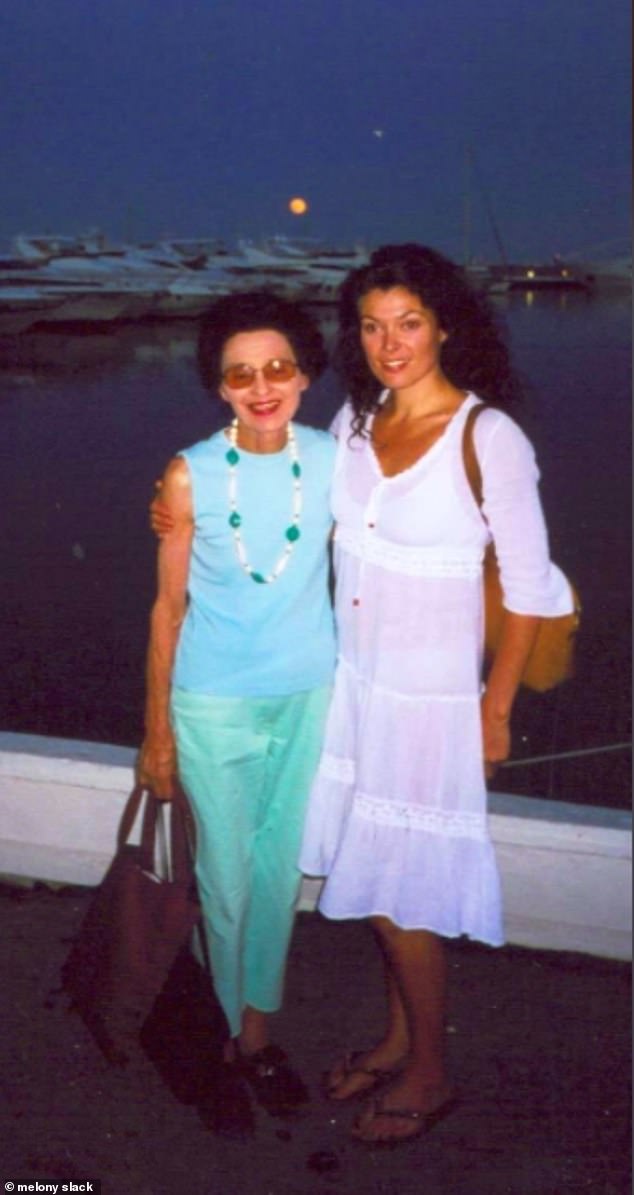 Determined to be strong for their son, Rachael, pictured with mother Jean,  concealed the abuse she was suffering

‘Because she was so caring, Rachael wanted to keep Andrew in Auden’s life as his father,’ Melony explained.

‘But now Hayden and I wonder if this was just an excuse because he was bombarding her with calls and texts, and she was afraid he might carry out his threats to kill her, and also himself.’

Determined to be strong for their son, Rachael concealed the abuse she was suffering, but the family sensed that something wasn’t right.

‘Andrew was intimidating, isolating and threatening her,’ Melony said. ‘But due to his mental health issues, Rachael was still helping him with tasks like laundry and shopping. We didn’t realise this was actually a pattern of coercive and controlling behaviour. The bubbly, confident Rachael we always knew was slowly disappearing.’

• Is your partner excessively jealous and possessive?

• Is he charming one minute and abusive the next?

• Is he stopping you from seeing your family and friends? Do you feel isolated?

• Is he constantly criticizing you and putting you down in public?

• Does he embarrass you, often in front of family and friends?

• Does your partner play mind games and make you unsure of your own judgment?

• Does he tell you you’re useless and couldn’t cope without him?

• Does he control your money?

• Does he tell you what to wear, who to see, where to go, what to think?

• Does he pressure you to have sex when you don’t want to?

• Are you starting to walk on eggshells to avoid making him angry?

• Does he monitor your movements? Or check up on you via your email, Facebook, Twitter or by looking at your text messages?

• Does he use anger and intimidation to frighten you and make you comply with his demands?

• Has your partner ever threatened you, or intimidated you by using violent language or smashing up the furniture?

• Are you forced to alter your behaviour because you are frightened of your partner’s reaction?

• Are you blamed for their behaviour e.g. they say you were “asking for it” or deserved the abuse?

If you answered yes to any of the above questions, then you may be experiencing domestic violence.

Abuse is a crime and it is never your fault. You don’t have to deal with this alone. Refuge is here to support you.

Leaving an abusive partner is the time when a woman or her children are most likely to be seriously harmed. In May 2010, Rachael told Cairns she’d fallen in love with an old school friend, Robert Barlow, and the couple were expecting a baby.

In response, Cairns made the first of several threats to kill her, which Rachael reported to Derbyshire Police. Cairns was arrested but released on police bail on May 26. Five days later, on 2nd June 2010, Melony received the tragic news that Rachael and Auden had been killed.

‘I was in a state of total disbelief,’ she said. ‘Life as we knew it no longer existed. None of us thought that Andrew would follow through with his threats – and we believed the police would protect her.’

As the family tried to make sense of the tragedy, Refuge reached out to offer their support. It was through this relationship that Rachael’s family slowly realised that she had in fact been a victim of domestic abuse. 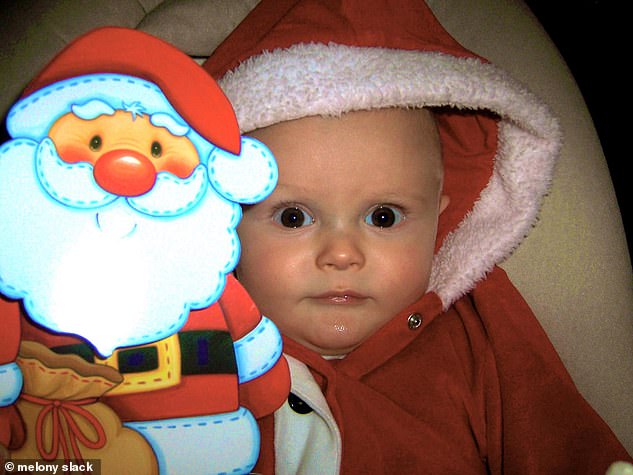 In May 2010, Rachael told Cairns she’d fallen in love with an old school friend, Robert Barlow, and the couple were expecting another baby. Pictured, Auden celebrating on Christmas day 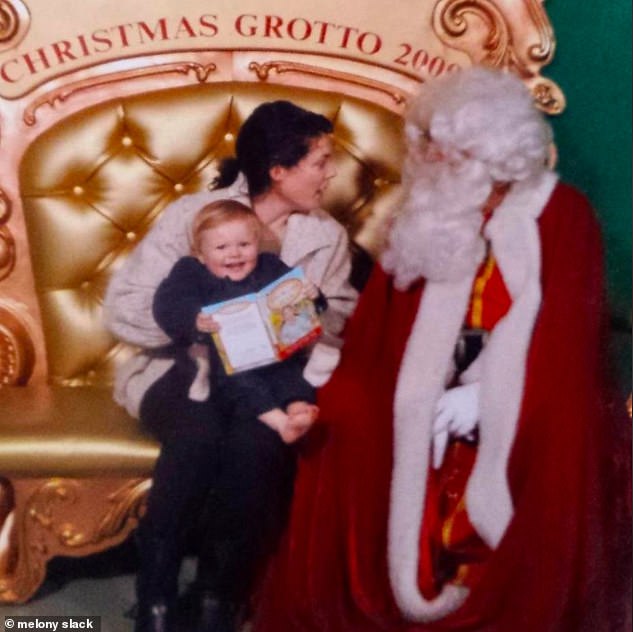 In 2013, an inquest jury found that Rachael and Auden had been unlawfully killed and police failings had played a part in their deaths. She is pictured with her son before her death

‘Domestic abuse is about more than physical violence and it can happen to anyone,’ Melony explained. ‘The police never told Rachael she was at risk, and we had no knowledge of any specialist services.

‘Had we known about all the options that were available through Refuge, including its Helpline, Rachael might’ve been saved.’

In 2013, an inquest jury found that Rachael and Auden had been unlawfully killed and police failings had played a part in their deaths. 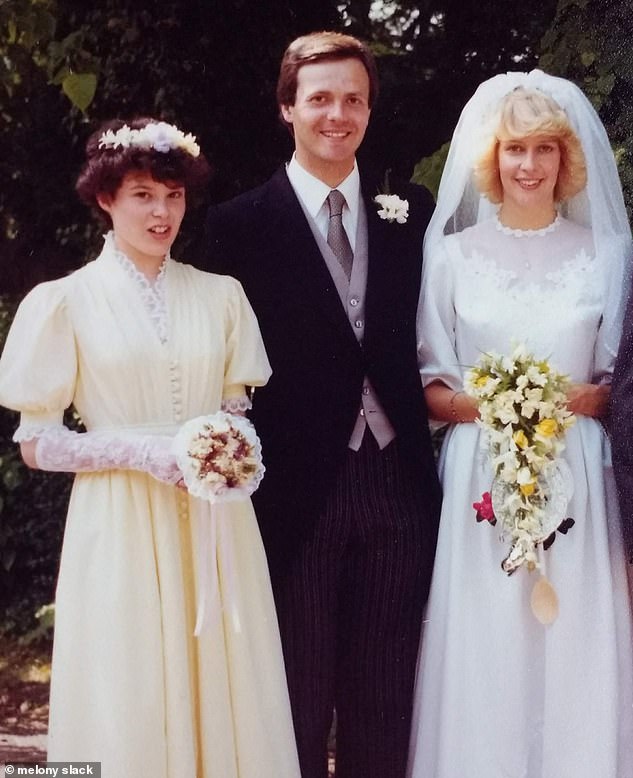 Melony sensed that something wasn’t right as the abuse continued, they are pictured on Hayden and Melony’s wedding day 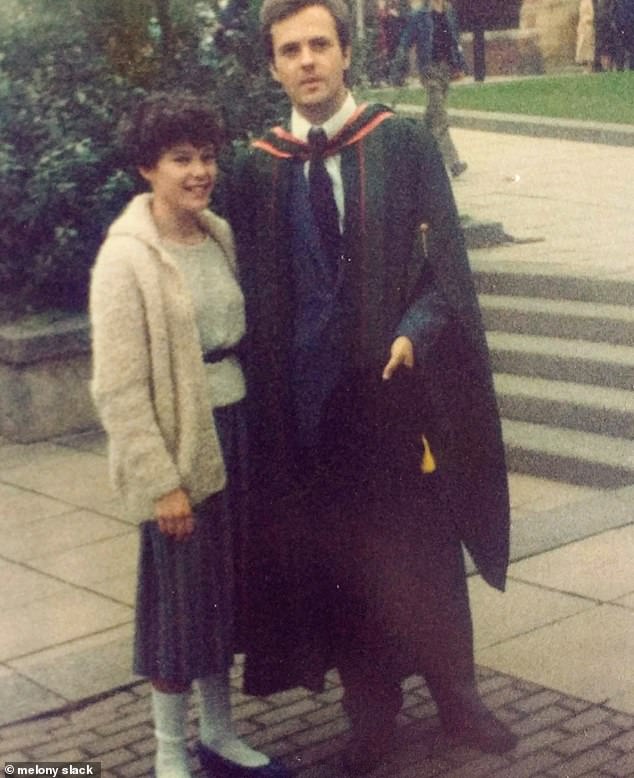 Melony hopes that the Domestic Abuse Bill, which recently has its second reading in Parliament will be strengthened and will pass quickly into law without further delay. Pictured, Rachael and Hayden on his graduation day

Now, ten years on, Melony is supporting Refuge’s calls for a strong Government response to protect women and children, which must continue long after lockdown is lifted.

Melony hopes that the Domestic Abuse Bill, which recently has its second reading in Parliament will be strengthened and will pass quickly into law without further delay.

‘It’s my responsibility to empower other women to seek help,’ Melony said. ‘Refuge has seen more demand for specialist services than ever during Covid-19 and women’s lives depend on charities like Refuge being able to keep their services running safely. 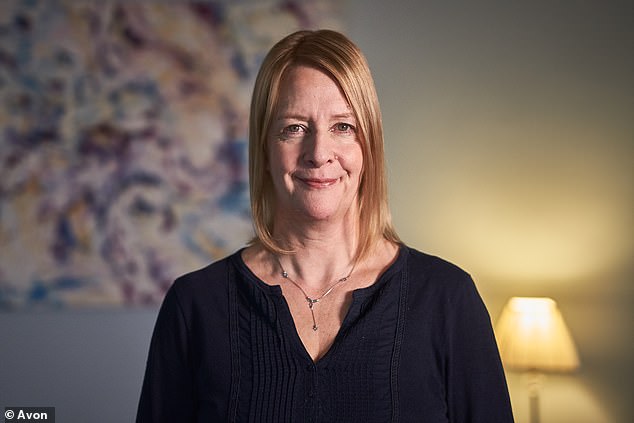 Now, ten years on, Melony is supporting Refuge’s calls for a strong Government response to protect women and children 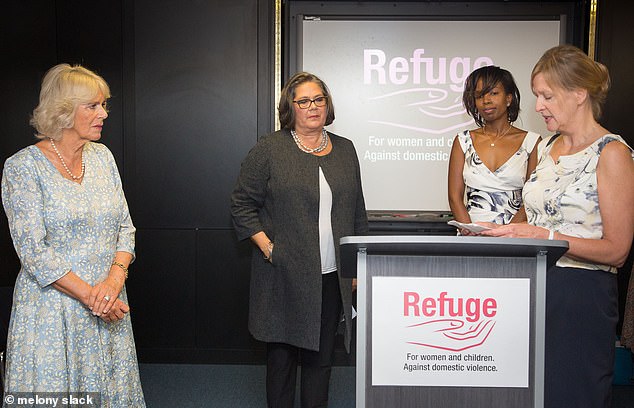 She is pictured attending a refuge event with the Duchess of Cornwall, Sandra Horley and Melanie Clarke

‘Rachael had so much to live for. If you’re worried for yourself or a loved one, you can call Refuge’s Helpline anytime on 0808 2000 247 or visit its Helpline website, www.nationaldahelpline.org.uk and request a safe time to be contacted.

‘Rachael was more than just a statistic. It shouldn’t take a tragedy like ours to make people realise that domestic abuse is still a matter of life or death.’