When sisters-in-law Lauren and Sophie Jones discovered they were both expecting, they were delighted to go through pregnancy together.

But with due dates 11 days apart, they weren’t expecting to share a labour ward.

So they were amazed to find themselves in hospital on the same day – and in neighbouring beds.

Their daughters Reeva and Evie were born within hours of each other – on January 13 – and their parents say they are more like twins than cousins. The births beat odds of 5,000–1.

It was in May last year that Sophie, 29, and her partner Mike Argent, 28, told their family she was pregnant. Two days later Lauren, 28, who is married to Sophie’s brother Frank, 32, revealed she was also expecting.

‘Going through our pregnancies at the same time was really special and we became very close – comparing our daily symptoms and going to prenatal classes together,’ said Lauren from her home in Ongar, Essex.

By January 11 this year, Sophie was nine days overdue and desperate for her baby to arrive. But it was Lauren whose contractions started first and she was admitted to Princess Alexandra Hospital in Harlow.

Four hours later, Sophie, whose contractions had started at last, was also admitted – and put in the bed next to her sister-in-law, with just a curtain separating them.

Lauren recalled: ‘She had no idea I was there. I was sitting on the maternity ward and heard Frank say “Oh my god, Soph’s here”.’ Sophie was later sent home before returning at 6pm – just an hour before Lauren went into the final stages of labour. Once again, the sisters-in-law were side by side, this time in neighbouring rooms. 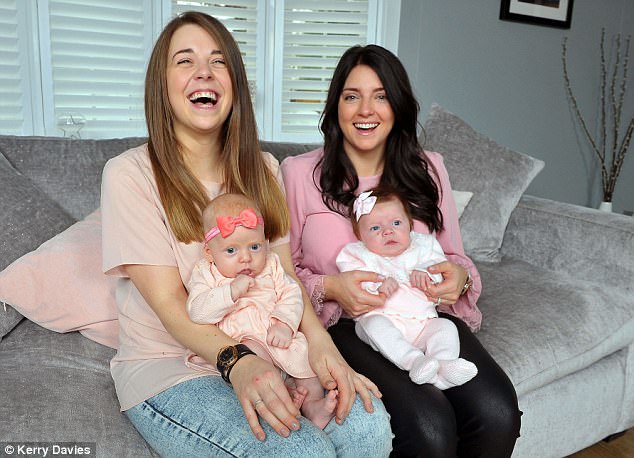 Sophie’s mother, Ann, who was keeping vigil at the hospital, found herself dealing with both a daughter and daughter-in-law in labour. ‘My mum was darting between the rooms,’ said Sophie.

‘It was really overwhelming for her.’

Lauren gave birth to Reeva at 1.40am with her in-laws willing her on from the next room. ‘It’s so special that they heard Reeva being born,’ Lauren said. ‘Not only did they hear people cheering, they even heard her first cry.’

Sophie had an emergency C-section, giving birth to Evie at 12.17pm. A couple of hours later, the proud mothers introduced their little girls. ‘We were both crying our eyes out,’ Lauren said.

‘We were meeting our new nieces who were virtually twins.’